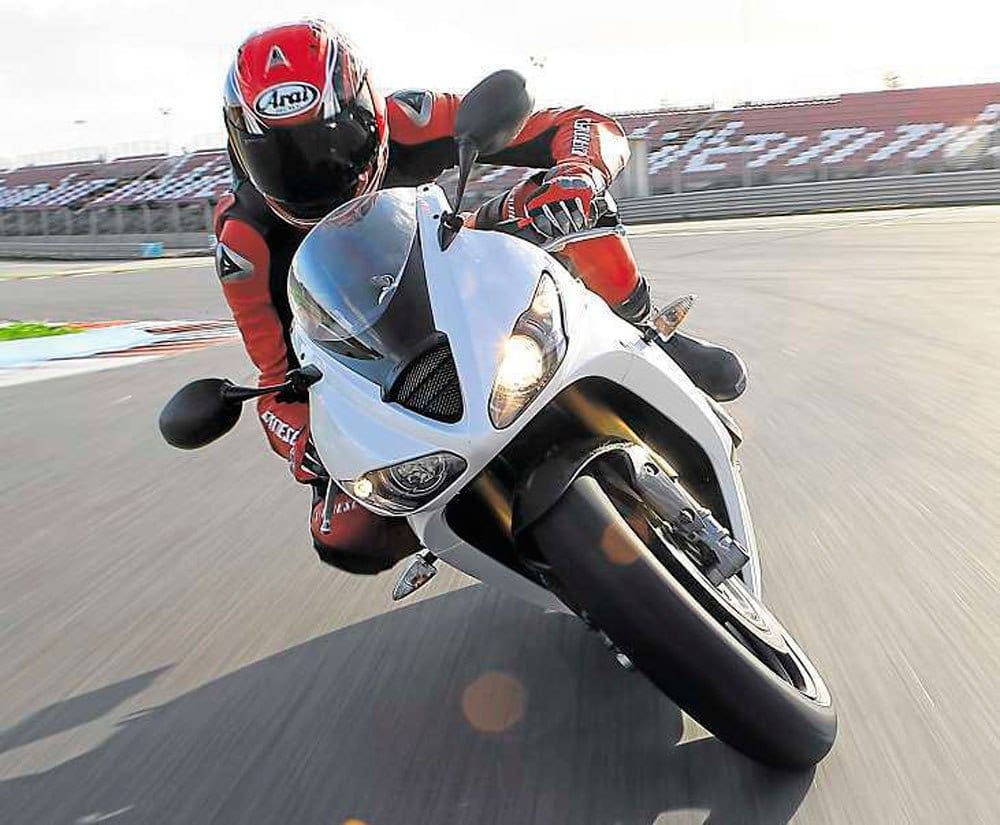 It’s one of the oldest and most popular tuning tricks in the book: adding uprated suspension, brakes and carbon fibre parts to create a higher specification version of an existing model. 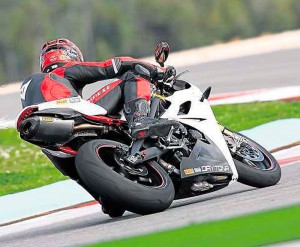 Aprilia and Ducati regularly use Öhlins and Brembo to add performance and glamour to their carbon-clad supersports flagships. Triumph themselves already have an R version of the naked Street Triple.

And now the Hinckley firm has introduced a Daytona 675R supersports model too. Its creation is a natural step, given that the original Daytona 675 was launched back in 2006 and the current version, with its revamped engine and chassis, arrived two years ago.

Although the middleweight supersports class advances less rapidly than it once did, the 675 still needed fresh impetus if its success was to be maintained. For the manufacturer, one advantage of an R-model such as this is that relatively little development time and cost is required. There’s no change to the Triumph’s 675cc, DOHC 12-valve engine, whose top end tweak two years ago increased peak output to 124bhp at 12,600rpm. The cast aluminium frame and twin-sided swingarm are also retained. 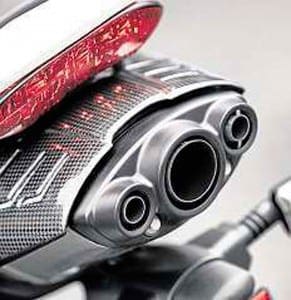 Up front the Daytona uses new triple clamps to hold its Öhlins forks, which are 43mmNIX30 units of serious racing pedigree (the 30 refers to the damping cartridge’s diameter in millimetres).

The rear shock is a similarly high specification TTX36 unit, the TT standing for the Swedish firm’s Twin Tube technology. Its internal design reduces friction and risk of damping oil cavitation, improving feedback and control, according to Öhlins. 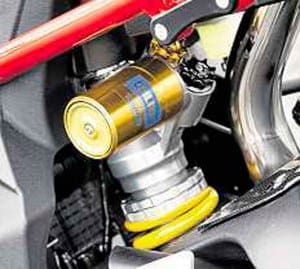 Visually the R-bike is instantly identifiable by its white paintwork, with new tank graphics, black fairing lowers and red-finished steel subframe tubes. Look closer and there are Triumph logos on clutch and generator covers, as well as carbon fibre for the front mudguard, fairing internals, rear hugger and the high-level silencer’s heat shield. These parts presumably save a few grams, although the bike’s claimed weight of 185kgwet is identical to that of the standard 675 (which was previously quoted at 162kg dry).

Whichever way you measure it, the Daytona is very light indeed, and respectably low with a seat height of 830mm, around the supersports average. The 675R felt every bit as compact and manageable as the standard model as I threw my leg over that seat for the first time in the Portimao pit lane, relieved to find that the gusting wind had already dried the Portuguese track almost completely following an early downpour. 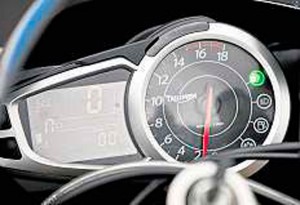 There was still the odd damp patch on the cold surface, but the Daytona proved predictably ideal for relearning the hilly circuit. Its three-cylinder engine felt as sweet as ever, revving towards its 13,900rpm limit with delicious smoothness, and with superbly crisp and accurate throttle response. On the first bike I rode, the motor’s unique character was enhanced by a free-breathing Arrow accessory can, whose warbling midrange sound hardened to a threepot scream that echoed off the huge, empty grandstand as the bike sped down the pit straight.

Inevitably the 675R couldn’t approach the straight-line stomp of the BMW S1000RR that I’d previously ridden here. But it still surged forward at a thrilling rate, and would doubtless have been indicating over 150mph on that downhill straight if I’d had time to glance down at the digital speedo. The motor was flexible by middleweight standards too, preferring 10,000rpm for maximum acceleration but happily leaping forward with the analogue tacho needle on 8000rpm or below. 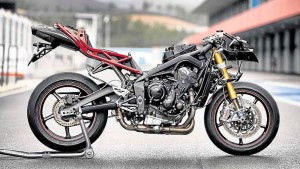 The quick shifter was a useful addition, enhancing the Triumph’s racy feel as well as saving some time by allowing wide-open changes. Unfortunately the shifter occasionally highlighted one of the 675’s few flaws – its slightly notchy gearbox. Unlike some riders, I didn’t find any false neutrals but the change sometimes felt a bit crude, especially at lower revs, and made the bike twitch when it was leant over.

Handling was otherwise excellent, although I wouldn’t go so far as to say that this bike was dramatically superior to the already sweet-steering standard 675, whose geometry it shares. The Rmodel’s Öhlins forks have slightly stiffer springs than the standard model’s Kayabas but interestingly, the TTX shock’s spring is 12% softer than its Kayaba equivalent, as the Swedish unit uses increased damping to give the firmer ride required for the R-bike.

Triumph test rider Felipe Lopez had firmed up both ends very slightly from showroom settings, and the Daytona’s rear end was fine for my 85kgweight. In fact, the bike in general felt brilliantly taut and racy. Its front end remained superbly well controlled at the end of that main straight; when I sat up and squeezed Brembo radial calipers they certainly gave as much bite and feel as their Nissin equivalents, and quite possibly a bit more besides. 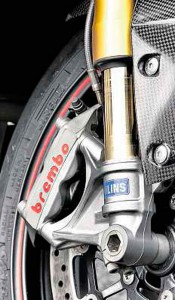 That said, I wasn’t the only rider who initially found the front end rather harsh, with a tendency to pass bumps through to the bars. Going back to standard suspension settings for the second session gave a notably smoother ride, at the expense of a little stability – especially as I flicked it into a couple of bends while hauling my body from one side of the bike to the other. Sometimes the Triumph’s bars twitched enough to make me wish the unchanged, non-adjustable steering damper inside its fairing nose was an adjustable Öhlins unit that could be firmed up a touch.

Surprisingly, the difference between front end settings in those two sessions was just one click of the left fork top’s compression damping adjuster (the NIX30’s rebound damping is set via the identical adjuster on the right fork top). Small adjustments of these forks clearly make a big difference. To counter the firmness over bumps it might have been useful to try reducing only the high-speed damping, but the R-bike’s Öhlins units have just a single compression damping adjuster, unlike the standard 675’s Kayabas, which can be tuned for both high- and low-speed damping. 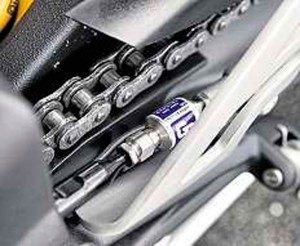 Instead, for my third and final session on the by now completely dry track I went back to the firmer front end setup. The Triumph felt better the harder I rode, and the more aggressively I threw it onto its side through the turns, then fired it out using the grip of the sticky Supercorsas. The 675R is certainly a superbly taut, track-ready machine. Its unchanged Daytona attributes of engine character and flexibility, light weight and sweet steering would also have made it an excellent bike for riding on the surrounding roads, though sadly there was no time for that. 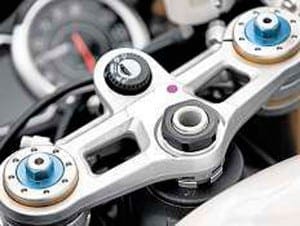 Those Öhlins suspension units should have more than enough adjustability to make the 675R respectably comfortable on everything from motorways to bumpy back-roads, although the TTX36 shock doesn’t have the remote preload adjuster of the £900 Öhlins unit in Triumph’s accessory catalogue. On the circuit I found my long legs getting a bit cramped by the compact Daytona’s high, nonadjustable footrests. It’s a shame Triumph haven’t fitted adjustable footrests like those of Suzuki’s latest GSX-R750, which is one obvious rival along with Ducati’s 848 EVO. 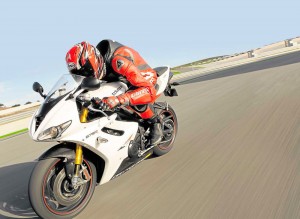 At £9799 the 675R is competitive on price with those very different opponents in the ‘oddball superbikes’ class. On specification and pure performance its closest rival is its standard Daytona 675 sibling, which currently costs £8399 and is currently being offered with almost £900 worth of free accessories: an Arrow slip-on can, quick-shifter and CNC-machined billet levers. For the £1400 price difference between the two triples, you

could return to the accessory catalogue for race wheels, rearsets, throwover panniers and an alarm.

That would make a seriously tasty red, blue or black Daytona that would arguably be lighter, more comfortable, more practical and less likely to be stolen than the new arrival. But if you want the latest, trickiest, most track-ready supersports bike that Triumph has ever built, it comes in white with a red subframe and it’s called the Daytona 675R. 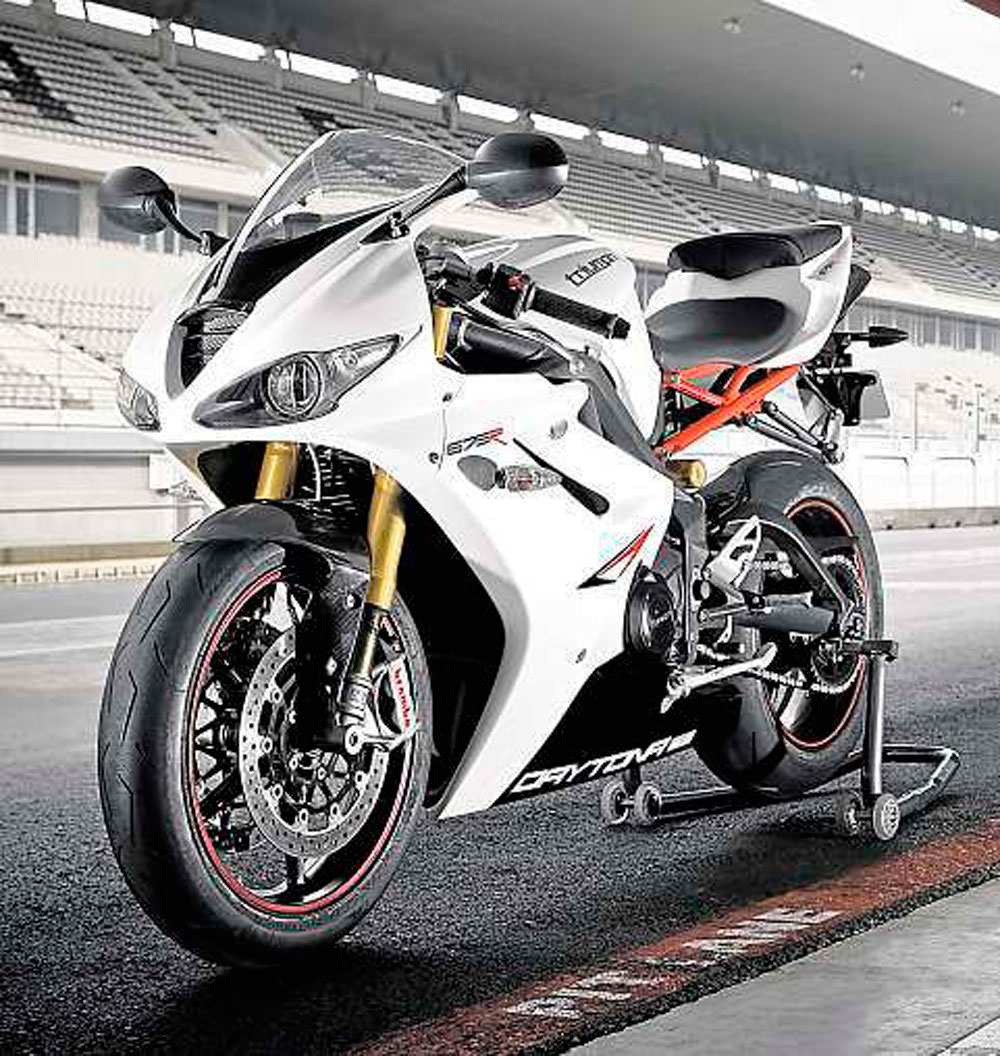