The RC8 looks like the bastard offspring spawned by Max Headroom and Kryten from Red Dwarf after a hedonistic weekend – angular is an understatement.

I’d been waiting eagerly to get my hands on the RC8, KTM’s first stab at a road going superbike, for a few months, so I was like an excited schoolboy when I was finally handed the orange key.

Designed by Austrian wizard, Gerald Kiska the RC8 was always going to be sharp, angular and (above all else) different to the usual crop of ‘cloned’ Japanese bikes we see. I’d seen the photos of his creation but in real life it’s still a shock to the system. The RC8 looks like the bastard offspring spawned by Max Headroom and Kryten from Red Dwarf after a hedonistic weekend – angular is an understatement. If it was black it’d be a stealth bomber.

The trademark KTM orange and black paintwork looks great adorning a fully fledged superbike for a change, as opposed to a big trailie, crosser or adventurer, although up close I was slightly disappointed by the finish on the tank. On the rest of the bike the paint is metallic and glossy while the tank gets a flat matt finish, which cheapens the look of what is otherwise a stunning paintjob.

I’d have to respray it to match the rest of the panels if I bought one. Turn the orange key and the large, yes you’ve guessed it, orange LCD display comes to life and the display does a quick sweep while it prepares the engine for the ride ahead. If your brain can take in all the information being thrown at you from the overcomplicated digital display then you’re a better man than me. Less is sometimes more when it comes to dashboards and this one would look at home on the Starship Enterprise! 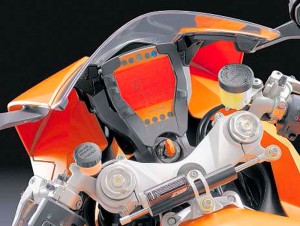 Without an owner’s manual I was lost and couldn’t work out how to reset the functions, (which include a lap timer, trip, fuel levels etc). I’m sure it’s easy when you know how… The bike looks like it’ll bark like a snarling racer with a prod of the button but it’s actually fairly quiet, certainly much quieter and less obtrusive than a 1098 and the KTM’s wet clutch makes it sound healthier too. Sitting on board for the first time the riding position is surprisingly roomy, which is nice; I’d even go as far as to say it was the most comfortable sportsbike I’ve ridden and the pegs are adjustable too. As the bike rumbles away on tickover the mirrors vibrate, so you know they’re going to be almost useless on the move and you’re right, they are!

Pull the lightweight clutch in and snick the bike into first, or should I say grind the gearbox into first, this is no precision operation that’s for sure. The RC8 pulls away cleanly, although the bike is fairly snatchy when riding at slow speeds, especially in stop-start traffic, so sub 30mph town work can be a chore and make you look like you’re struggling to get the hang of riding. Wind the throttle up and there’s no aggressive charge of acceleration to push you back into the seat, it’s certainly not a white knuckle ride that’s for sure, more of a progressive surge of power. The gear ratios are spaced quite far apart as well, which can make selecting the correct gear for some corners a bit tricky until you get used to the spread and adjust your riding to suit, there’s no getting away with a higher gear than you really need if you want a sharp exit.

If Lamborghini built superbikes this is exactly what you’d see in the showroom and although the KTM doesn’t come from an Italian manufacturer there are a lot of Italian quirks for an RC8 owner to learn to live with. Remember KTM are new to the superbike game, so it’d be a miracle for them to perfect it first time out and the Japanese companies we all use as the benchmark standard have been making sports bikes for ever. Vibration is one of those quirks, for the first few miles it bothered me but by the end of a decent blast I’d forgotten all about it, sometimes you can over analyse these things rather than just getting out and enjoying yourself. After all that’s what bikes are for.

Out of town, the traffic slowly thinned out and what was left of the rush hour was quickly despatched into the blurry rear view mirrors, picking vehicles off three and four at a time. Finding gaps in the distance along the open fens, brain working overtime to process the endless streams of information needed to methodically plan fast overtakes. I soon became lost in the ride on what was a perfect sunny evening on the longest day of the year. The RC8 may not be perfect, especially the fuelling and gearbox (which contains the odd false neutral and that annoyingly noisy meshing when selecting first) but as a hard edged sports bike it has more than delivered what KTM set out to do. 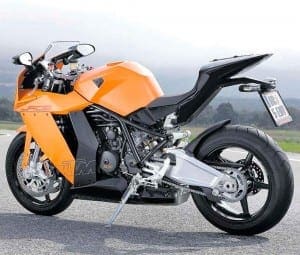 The KTM flows effortlessly around bends, its sharp fast steering making light work of all you can throw at it, and those incredible Brembo radial calipers stop the bike in an instant. Incidentally, the steering lock is surprisingly good, making turns in the road much less of a chore than on a lot of sportsbikes, although it is quite easy to trap your hands against the mirrors.

The quality WP suspension on the stock settings is hard but well damped and feeds enough information back to the rider through the miniscule seat to let you know exactly what is going on beneath those toffee-like Super Corsas. The KTM has a brand new 1090cc Vtwin engine but it’s not scarily, mind numbingly fast, in fact at times I felt like I wanted more of a kick in the backside type of power delivery but what you do get is a steady controllable delivery of torque which lets you enjoy the 155bhp at your disposal without catapulting you into oblivion with every miniscule wrist movement.

I had mixed feelings about the RC8 to begin with; I loved the overall look, style and feel of the bike. The paintwork is stunning (apart from the nasty tank). The gearbox and snatchy transmission in town also concerned me a bit and during the first few miles I was feeling pretty harsh towards the Austrian stunner. The ride home changed all that though. I found myself gelling with the bike. I loved the attention it got wherever I pulled up, it’s the kind of bike people stare at and ask questions, simply because it’s so gorgeous.

I also had one of those rides that only happen every so often, with the golden sun setting in the blue sky behind me and a Blade rider on the horizon, I locked him into the crosshairs of an imaginary sight and began to reel him in, our gigantic shadows danced across the fields and hedgerows as we matched each other perfectly across the open countryside. V-twin versus four cylinders, Europe, against Japan. The KTM excelled itself with its composure and the way it flowed around every sweeping bend and flew straight as a die along the endless Lincolnshire flatlands. A great ending to a road test which put the RC8 up among my best biking moments of all time, the company slogan goes ‘Ready to race’ and they’re not far off the mark. 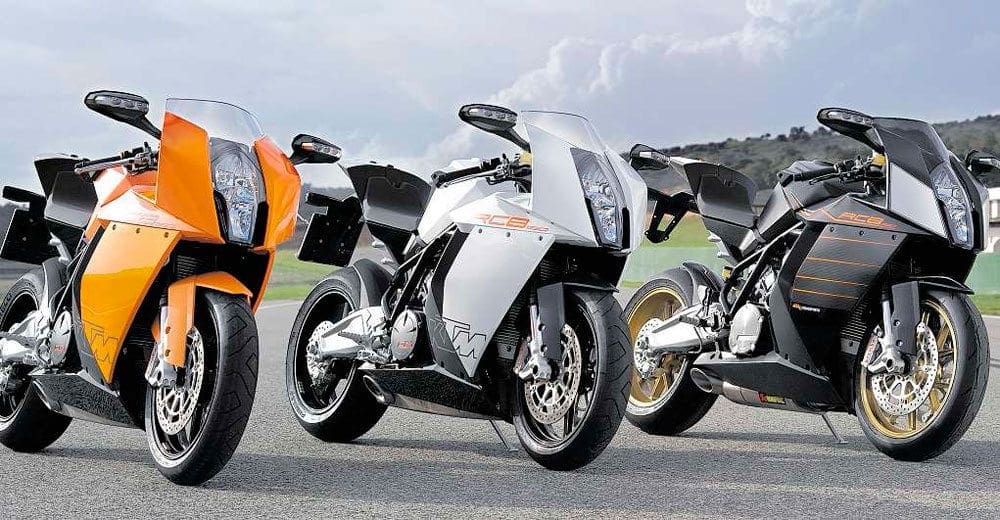