The biggest step forward in motorcycle controls for 70 years or the answer to a question nobody asked? MCM rides Honda’s new DCT VFR1200 to find out…

Just what is DCT?

Dual Clutch Transmission is Honda’s take on a quick-shifting, semiautomatic gearbox similar to those used in top-end sports cars since 2003.This is not an automatic gearbox (although in two out of three modes it acts like one), but an electronically controlled manual one that removes the need for clutch and gear levers with all the associated linkages and cables. Honda has chosen its flagship VFR1200F as the first bike to run the DCT gearbox as an option. 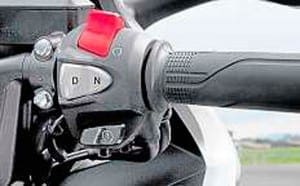 How does it work?

Instead of all six gears being on one shaft with a single clutch at the end, there are two shafts: one with the odd numbered gears and the other with the even numbers. And there are also two clutches. When you select first gear, the clutch controlling that gear engages and off you go. But while first is engaged, the second shaft preselects second gear with the second clutch disengaged, but ready to go. So when you select second gear, it’s already there, waiting and you are actually switching clutches, not gears. As soon as second gear is selected the other shaft pre-selects third and so on. The clever bit about the Honda system as opposed to the double clutch car gearboxes is that it is very compact. The car boys, who have lots of space to play with, run two shafts and two clutches side by side. Honda’s DCT has the one shaft running inside the other with the clutches mounted side by side.

What do the buttons do?

At first glance the DCT and non-DCT VFR1200s look very similar. Then you notice there’s no clutch lever and no gear lever either. There are two paddles, marked + and – on the left hand switchgear, a handbrake (yes really because you can’t leave this bike in gear on a hill) and a button below the kill switch on the right side to select Neutral, Drive or Sports mode. There’s also a paddle on top of the right-side switchgear to select auto or manual mode. All of which sounds confusing, but in practice is logical and simple to operate. 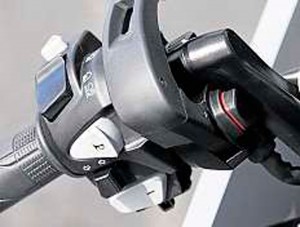 Pretty good. I was sceptical, but half an hour later I’d stopped thinking about it. From a standstill, you start the bike as normal, and press the rhs switch to engageD(Drive) or another click for S (Sport). Open the throttle and off you go. No lurching, no hassle: just like a 170bhp scooter. In D mode the gear changes come thick and fast at low revs and you’re in top gear by 45mph. Not that you’d notice. Apart from the clunky shift from first to second, the changes are so smooth you barely notice. Dmode is for cruising and maximum economy; open the throttle for an overtake, very little happens and approaching a corner it feels slow to change down.

S-mode is much more like it. First to second is still clunky and happens at low revs but after that the engine revs higher between gear changes although still not quite to the redline. In this mode, the VFR feels like a sportsbike again and always seems to be in the right gear. There’s a sensor that detects a quick opening of the throttle when you need to overtake and drops the bike down a gear or two in response – like ‘kick down’ in an auto car.

It was only when we swapped fast, sweeping A-roads for a Bavarian hairpin frenzy that the problems occurred. Approaching a tight corner in a gear too high, the DCT takes a fraction too long to change down, meaning I was often already into the turn at full lean before I got the gear I needed. 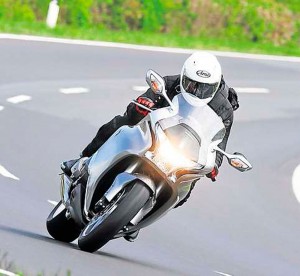 It is possible to override the auto-box by pushing one of the manual paddles, so you can change down a gear when you want to in S-mode, but you’ll then need to re-select S-mode as the DCT will have automatically shifted into manual mode as you press the trigger. The solution to this is to ride in Manual mode all the time, using the two paddles on the lhs switchgear to go up and down the box. In this mode you get all the control of a manual and the quick shifting of the DCT. It will need longer than the six hours we had on the bike for the system to become instinctive – I felt like a beginner again for much of the time in M-mode; thinking very deliberately about every gear change – but once familiar with it, DCT in M mode will be one hell of a system.

Another feature worth mentioning should you come to a stop in a high gear or have to do an emergency stop, the system automatically drops into first gear (even in manual-mode) as speed drops below 12mph. It’s impossible to stall it.

How does it predict gear changes?

The DCT assumes that your next shift will be up (unless you’re in sixth) and pre-selects the next gear up. This is because upshifts need to be faster than downshifts because upshifts happen during acceleration, downshifts under braking when instant gear selection is less important. So, let’s say you are in fourth gear on a twisty road. The DCT will assume that fifth is the next gear required, not third and so fifth is preselected. If you then shut the throttle and brake, the computer controlling all this recognises it and de-selects fifth and pre-selects third. At a given combination of throttle position, engine and road speed it will then shift down. This seems the most likely explanation for the problem outlined above in tight corners but using manual mode removes the problem so it isn‘t a pre-selection issue (that happens very quickly); more likely it’s a detection issue.

How much is it?

DCT will add £1100 to the price of a VFR1200 taking to price to £13,200 OTR. If the standard VFR’s gearbox was clunky then it might be worth it, but ironically, Honda have fitted DCT to the bike with their slickest manual gearbox ever. But the truth is, £1100 is a bargain compared to the cost of developing the system. As a rider, you experience a simple, slick gear change, but the technology inside that engine and the problems overcome to make it work are enormous. One example is how compact the system is – barely an inch wider than the standard VFR gearbox for an extra 10kg of metal.

Back in the real world…

Press launches are great for giving a first impression but you really find out what’s what when you ride a bike on the same roads you use every day. I’ve just done two weeks with the DCT VFR and I’m absolutely convinced. With one proviso. Ignore the automatic modes and just use the manual shift. It took a couple of hundred miles to get so familiar with it that I was no longer thinking about changing gear by hand instead of foot. And once familiar, the way it changes gear is out of this world. So fast, so slick, so easy, whether going up or down the box. Filtering through a 15-mile tailback on the M1 proved a doddle because the system works well at low speed and with no clutch lever to feather, there’s none of the horrible hand ache that you get with prolonged filtering.

There are only two niggles. One mine, and the other the bike. First off, when something catches you out, instinct takes over and you find yourself reaching for a clutch lever and gear pedal that isn’t there. Secondly, approaching a junction at very low speeds, where you’d normally slip the clutch until you can see if it’s clear, the transition between off and on the throttle needs a lot of care to avoid lurching out into road. After two weeks on the bike I was almost there, but still not quite confident with this one aspect of the system.

Why would I want one?

If you’ve spent 25 years perfecting clutch control then the only reason would be curiosity or a desire to shave thousandths of a second from every gear change (the system is quicker than any quick shifter I‘ve used). Honda claims that DCT gives smoother gear changing and makes two-up riding a lot more comfortable. They also acknowledge that the bike market is getting older and many new riders are car drivers who have a similar system on their existing four-wheeler. Why spend years learning a new system if technology can do it for you?

Yes. Go to www.honda.co.uk/motorcycles to locate your nearest dealer. Longer test rides than normal are being offered to allow riders to get familiar with the DCT system.