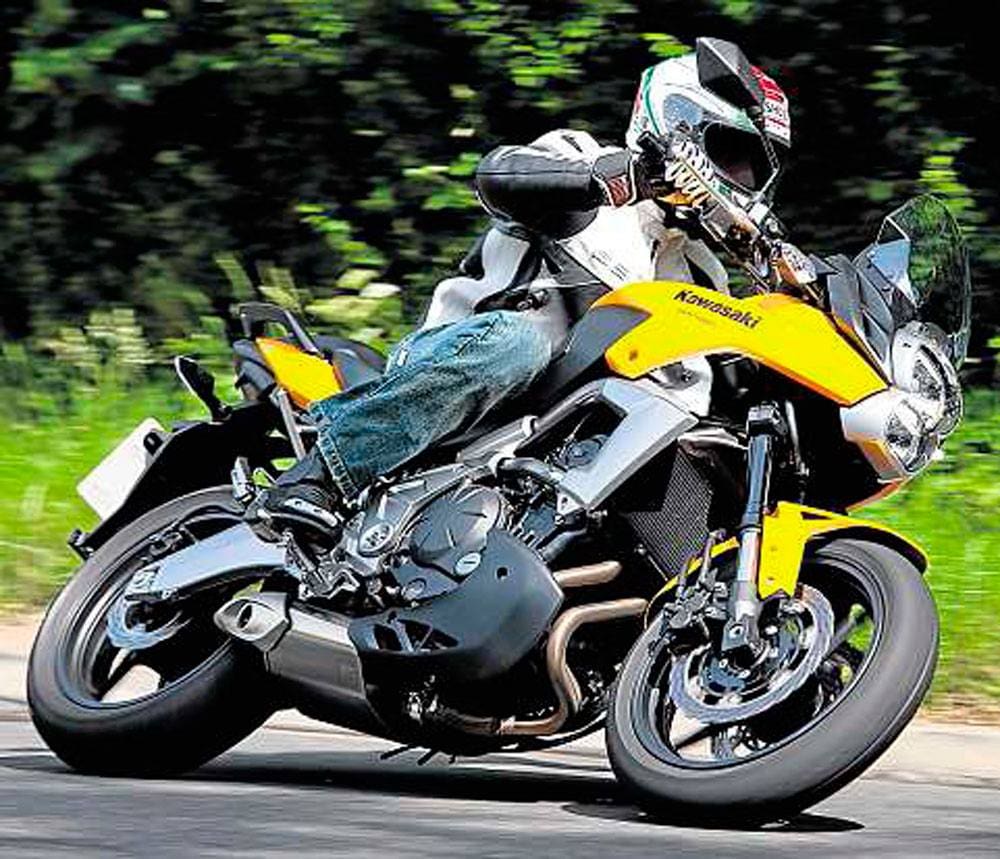 The Versys stands tall, like an adventure bike. It’s easy to forget that it shares most of its chassis with Kawasaki’sER-6 sportster including the 17-inch wheels on road tyres (although the standard fit Dunlop Sportmaxs are horrible in the wet – fit some Roadsmarts at the earliest opportunity). 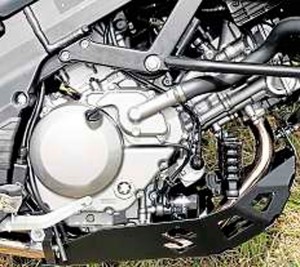 Like the Suzuki DL650 V-Strom it’s also got an engine with a split personality. A gentle plodder up to 6000rpm. A bit lumpy and rough at low revs – to tell the truth I didn’t really like it at first. But once you start to rev it the Kawasaki flies. And the whole character of the bike changes. The parallel twin engine is light, compact and quick-revving above 6000rpm. It feels like a sportsbike – albeit one with budget suspension fitted. The way the Versys takes off and charges down a twisty road belies its Monday-to- Friday practicality. It takes a few corners to familiarise and get the best from it. Choosing the right gear (usually one lower than you feel comfy with) is essential for decent drive out of a turn, otherwise it bogs down and jogs onto the straight when you’re expecting a sprint.

Look at the specs and you’ll get an idea of why it feels so sporty. That tiny wheelbase is shorter than many race replicas and it’s that which allows the Versys to turn so fast. Thankfully it’s also stable at high speed without the need for a steering damper.

Kawasaki has a long history of parallel twins. Their first big bike was a 650cc parallel twin based heavily on an old BSA. In the mid-80s they launched the massively popular GPZ500 and decidedly unpopular KLE500 – both of which were forerunners of the ER-6 and Versys.

Unfortunately, the Versys’ brakes and suspension aren’t quite up to the engine’s performance. Both are adequate. The brakes work, they just need a strong hand for quick stopping. And the suspension keeps everything under control but feels a little crudely damped on bumpy roads. Maybe it’s because you’re going faster than the Suzuki, which asks more of the forks and rear shock. Maybe it’s because the Kawasaki has a simple rear suspension design with no rising rate linkage (most bikes have a linkage that progressively alters the force required to compress the spring the more it compresses). But the Suzuki and BMW always felt more isolated from the bumps. 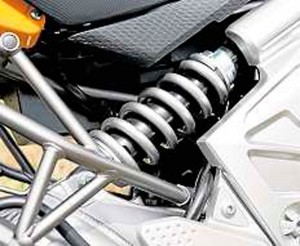 But one area where the Kawasaki wins by miles is ground clearance. Even Bruce, MCM’s tame racer, was impressed and the same roads that had me marking territory with scuffed toe sliders were left untroubled on the Versys.

But enough of this sporty talk – what about the day-to-day stuff? The Versys is comfy ridden solo, with a decent fairing and adjustable (but not on the move) screen. Two-up, it isn’t so good. A mate who I gave a lift home to was particularly unimpressed with the pillion accommodation. He couldn’t brace himself against the side-mounted grab handles and had to hook his feet under the pillion pegs to stay onboard despite me riding like Mary Whitehouse because I could feel his anxiety from the front.

But no matter how you ride it, the Kawasaki sips petrol. It always gave more mpg than the others despite getting ridden the hardest. 63mpg on the motorway at 80mph, 55mpg in full attack mode down my favourite back roads. My commute to work is a 106-mile round trip each day. On my VFR1200 I average 60mph door to door and use £300 of fuel per month.

On the Kawasaki I was also averaging 60mph but using £236 of fuel – a saving of roughly £64 a month for going no slower. That’s impressive. The whole bike is impressive. And like the V-Strom it’s been around long enough now for there to be some good deals on lightly used examples and a few discounts on new ones too. There are still a few 2009-spec bikes (the 2010 model had cosmetic and detail updates) in dealers – some on sale with delivery mileage for less than £5000. With new bike prices rocketing this year and the market rapidly rediscovering the lightweight, fun middleweights, I suspect they won’t be there for long. 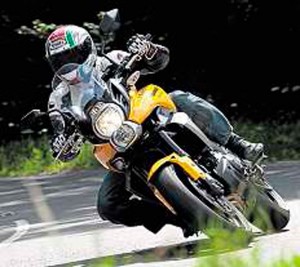