Compared to Kawasaki’s Versys, and BMW’s F650GS, the Suzuki is the least sporty of the three bikes, despite having an alloy frame and sharing its water-cooled, fuel injected V-twin engine with the SV650 that dominates mini-twins racing. Styled like an adventure bike, the V-Strom is really a middleweight tourer.

Which means it’s comfy for one or two people, cruises easily at 80mph, has enough zip to get past traffic quickly and safely and can do an easy 200 miles before the fuel light comes on. Everything you’d want from a decent touring bike (with the exception of shaft drive) without the bulk or the weight or the cost. For an extra £900 there’s a GT version that has full factory luggage and ABS too.

So how come the Suzuki splits opinion? Because when you’re swapping from one bike to another on a group test it tends to be the sportier, fizzier bikes that grab your attention. The V-Strom starts to win you over when ridden for a few days in isolation. That engine, first seen in 1999, might be the oldest here by some margin but it’s got a split personality that I like. 80mph in top gear is a relatively lazy 6000rpm. At these revs there’s still enough go for a lazy overtake on a dawdling car or truck and it only needs a single down change to find proper acceleration should you misjudge the speed of oncoming traffic. Ridden like this, the V-Strom is relaxed and frugal – averaging 50mpg on the back roads and 59mpg on the motorway. 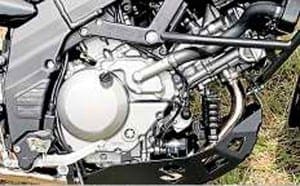 And on those days when the horns come out, you can rev this little fella like a proper sportsbike. The harder you rev it the more direct the connection between throttle cable and pistons becomes. The gearbox is okay – not one of Suzuki’s best and occasionally a bit clunky. Bruce had occasional problems with missed gears, I never did. And in fairness, our test bike arrived with just 13 miles on the clock. I’d expect things to be slicker by the time it’s run in properly.

The other thing that split opinion was the handling. Mel wasn’t keen, Bruce needed more ground clearance, I was perfectly happy with it. On the photoshoot where the bike gets ridden round the same corner, time and again, leaning further each time as the rider’s confidence grows, the Suzuki was grinding its footpegs fairly early. But photoshoots don’t reflect reality. On the road, in normal riding I was scuffing my boots, but rarely touched anything else down.

Much more important to most people will be the confidence with which the Suzuki corners. The brakes are powerful enough with a progressive increase in power as you squeeze the lever harder and while the soft front suspension uses most of its travel, it comes back up progressively when you release the brake, keeping things stable. The VStrom steers easily and tracks well through a turn and so long as you’re in the right gear it’ll power out the other side nicely too.

The suspension is more like a tourer than a trailie but you knew that already. This is no adventure bike, despite the styling and tyre sizes shared with BMW’s R1200GS. Those springs are soft enough to be comfy but with well-controlled damping keeps the Suzuki stable. There’s not much adjustment (spring preload front and rear plus rebound damping at the back), but the standard settings are fine – all it would take is a bit more preload to soak up the weight of a passenger. 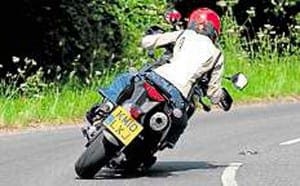 Up front the clocks are simple and functional. There are two trip meters, a reasonably accurate fuel gauge and a clock and that’s it. But at least on the Suzuki you can see the trip meter and the clock at the same time. On the other two it’s either/or, which is disappointing.

So, the V-Strom is quick, comfy, practical, cheap to run and cheap to buy too (it’s been around a long time which means there are plenty of discounted new bikes and low mileage used and ex-demonstrator bikes in dealers – best deal we found was £5495 for an ex-demo GT model with full luggage and ABS). It’s not the most fun bike here and not necessarily the one that’ll win you over in a half-hour test ride. But it might just be the saviour of motorcycling.