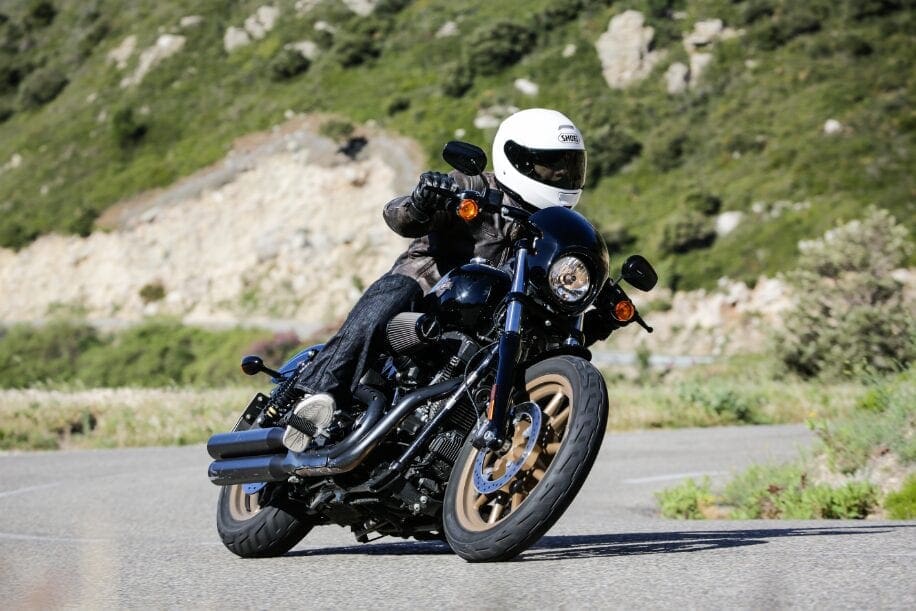 Harley-Davidson may be king of the custom scene, but in recent years it has seen increased competition from all sides, with other manufacturers adding more and more parts and accessories to their catalogues and making their bikes easier to customise. H-D still has the edge, with a catalogue of over 10,000 items, but there must have been enough of a storm brewing for Harley to launch its Dark Custom range in 2008.

The Dark Custom bikes are designed to be authentic, individual and rebellious, and according to Harley, they are among the best-selling bikes among the under-35 customer base. The overall approach is a stripped-back, minimalistic silhouette, blacked-out parts, modern performance and, of course, potential for serious further customisation.

The latest bikes to join the dark side of Harley’s range are the Roadster and the Dyna Low Rider S. Neither is a complete departure from tradition (the engines and most of the chassis are from existing stock), but they have enough modern engineering and design touches to make them appeal to new audiences.

Love it or loathe it, you’ll form an opinion of the Low Rider S from the moment you push the start button. The air-cooled 1,801cc V-twin engine may be rubber-mounted, but when you start the bike, you feel it come alive with a great shake, like a big dog after a mid-afternoon nap. You can feel it pulsing through the seat, bars and pegs. This is a proper bruiser.

The bike isn’t massive, mostly because the big engine is in the relatively small frame of the Low Rider. The wheelbase is an impressive 1,630mm, but with the low seat at 685mm and a relaxed riding position, it looks very approachable. The bike only comes in black, with gold wheels, and somehow that combination works. The aesthetics are stylish with the only splash of colour being the red air filter. 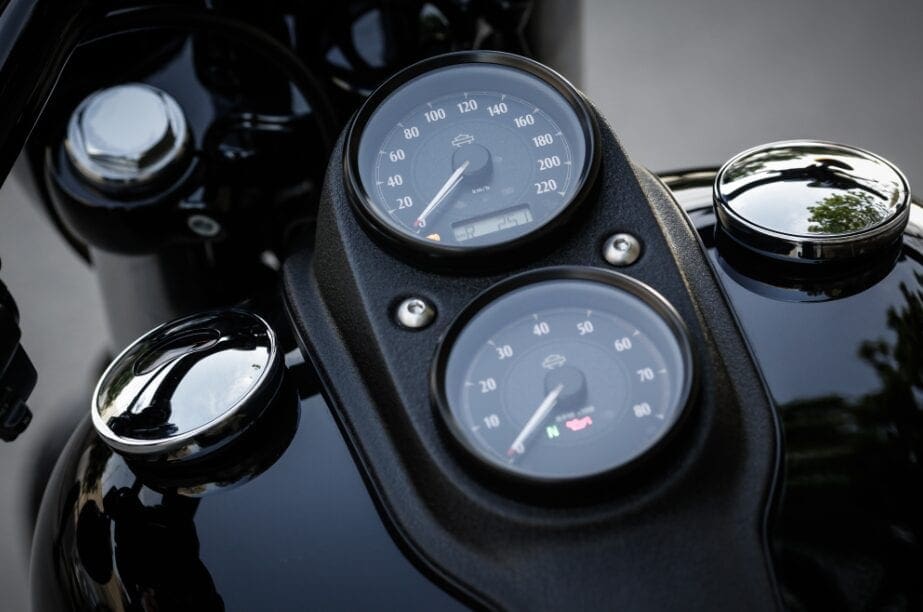 The clocks are housed on the tank rather than the front cowl, which looks good, but they’re not in your peripheral vision as your eyes are on the road ahead. There’s an analogue speedo and tachometer, as well as digital display for trips, odometer, gear, time and range. The fuel gauge is also on the tank, opposite the filler cap.

The switchgear is simple and easy to operate with the start, engine kill and hazards on the right and the lights, horn and dash selector on the left. On the left you also have the cruise control, which we didn’t really have much need for on the twisty roads from Marseille to Saint-Tropez, but for long slogs on bigger roads, it’ll be handy. In traditional Harley style, the indicators are split to left and right, which took a while to get used to. The buttons take some effort to press, and especially on the throttle side I struggled to operate them smoothly. Luckily there’s an auto-cancel function so you only need to switch them on.

The engine is big, powerful and surprisingly sophisticated. It’s called the Screamin’ Eagle 110 and it rumbles like thunder. Harley-Davidson doesn’t often publicise the power figures of its bikes, but the peak torque for this one is a claimed 156Nm (115ft-lb) at 3,500rpm. With that amount of grunt, the bike pulls keenly almost regardless of which gear is selected. If you hit the limiter at 5,000rpm, the engine simply stops adding power rather than send little jabs through your throttle hand like some bikes do. Not that you need to get near the limiter – all the power is available further down the range. When you open the throttle and accelerate hard, the engine roars beautifully and the power is delivered smoothly and swiftly. 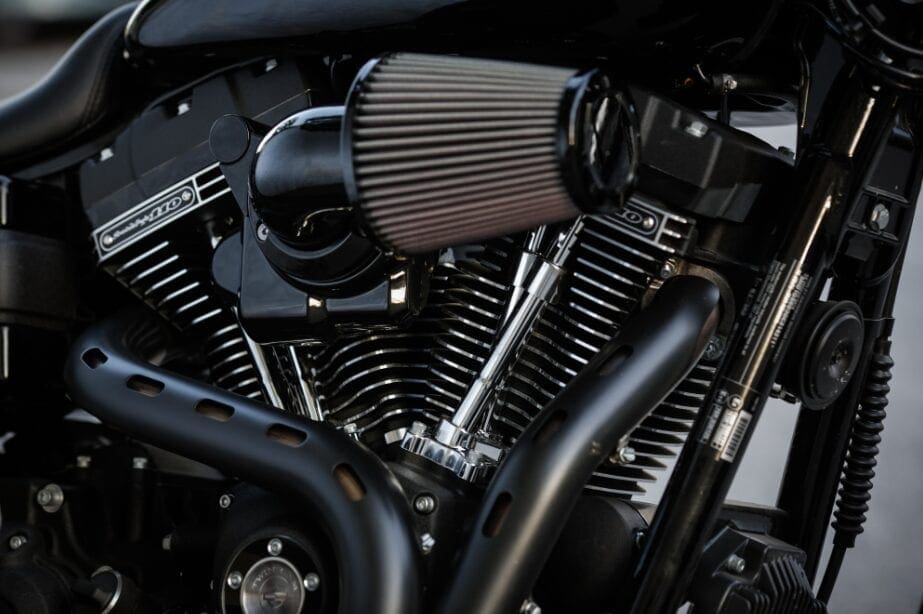 There’s a six-speed gearbox transferring the power to the belt final drive. On the twisty roads where we spent most of the test, I had little use of gears five and six, but on the bigger roads and combined with the cruise control, they should make high-mileage trips more pleasant and economical.

The bike weighs over 300kg wet, so it’s no lightweight, but the frame is quite small for such a big engine. The low seat and the fairly high bars combine to create a relaxed riding position. Foot pegs are placed halfway between the ‘standard’ position and a feet-forward set-up, which adds to the relaxed and comfortable feel of the bike. There is nothing to grab with your knees during acceleration and braking, but the sculpted single seat keeps the rider firmly planted and there’s no need to hang on to the handlebars. 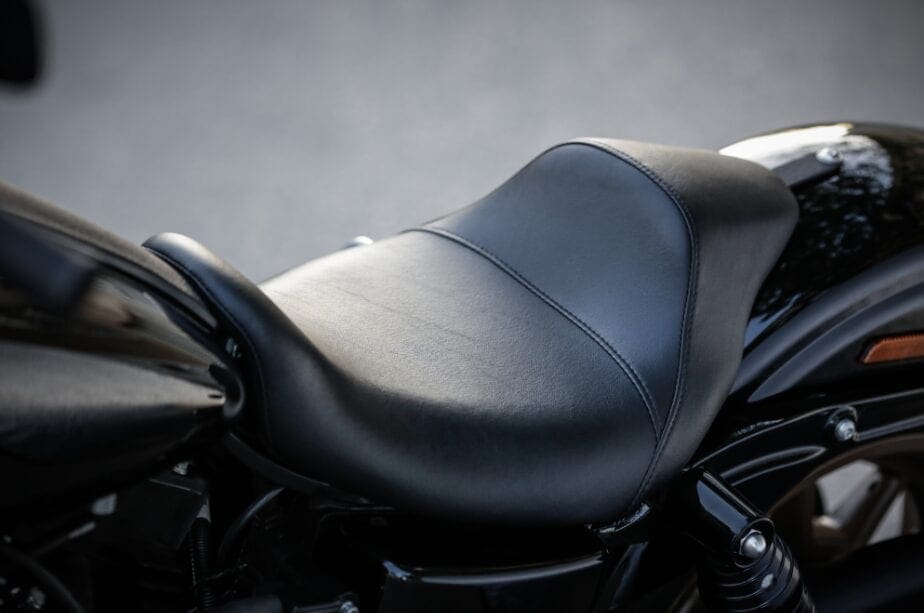 The foot pegs are very low and it really doesn’t take much lean angle to touch them down. With a bike this heavy, grinding the pegs feels like a gentle reminder that the limit has been reached, as long as you don’t push it any further it’s all good. H-D says the lean angles are 28.5 degrees on the left and 27.5 on the right, so getting your knee down will be a bit challenging. With the sheer weight of the machine you can only achieve so much by leaning off the side, and the seat doesn’t really encourage you to move too much, so it’s best to just take it easy, shave off a bit of speed in the bends and enjoy the ride.

Keeping the rubber on the road

Suspension has been upgraded from the base model, with the Premium Ride emulsion shocks at the rear from the H-D catalogue. At the front, there’s a cartridge-style 49mm Premium Ride fork. Rear preload is adjustable, but I was happy with the standard setting as the suspension was firm enough to feel in control in the corners and progressive enough to not let little bumps in the road get in the way of riding comfort. Suspension travel at the rear is only 54mm (130mm at the front), so the smoothness of the ride was impressive. I expect the long wheelbase also helps with the overall stability. 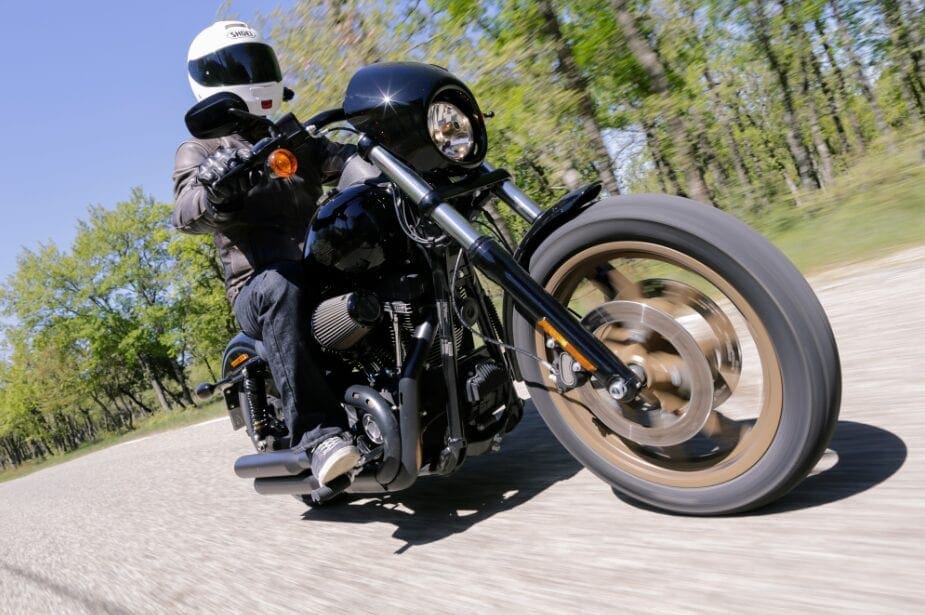 The brakes feature ABS (non-switchable) as standard, with four-piston calipers and two 300mm discs at the front and a two-piston caliper and a single 292mm disc at the rear. There’s plenty of power in the brakes and the ABS kicked in pretty smoothly as I grabbed a handful and narrowly avoided getting up close and personal with a French driver who decided to pull out in front of me.

Who is it for?

The Low Rider S is a great bike if you like big V-engines, loads of torque and all-day comfort. It’s not the fastest or the most economical (claimed 44mpg) of bikes, but it brings a smile to your face as soon as you start the engine. It was surprisingly nimble for urban riding too, and crawling through the streets of Marseille was easy. The clutch is slightly on the heavy side but with the amount of torque on offer, you can be a bit lazy with it. But the natural habitat of this beast is the open road, where you can make that big engine scream and let the fly-screen keep the wind off your body. At £14,995 it’s a big investment, but if you’re after a big bruiser, this one is bags of fun. 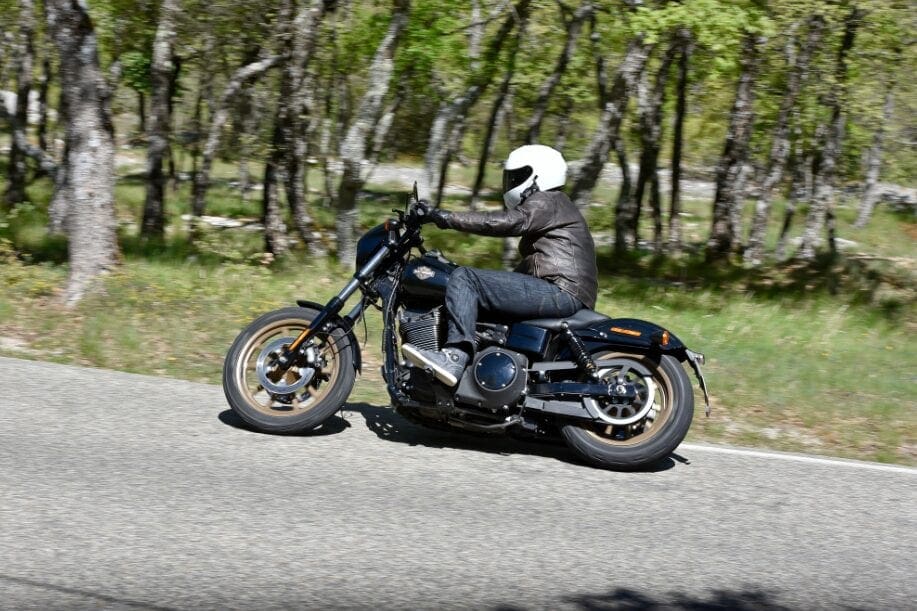 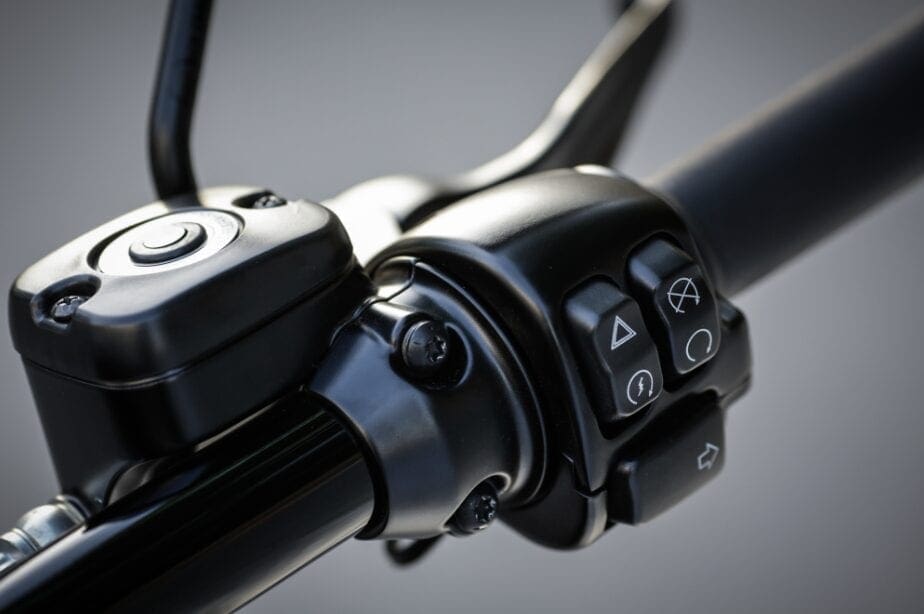 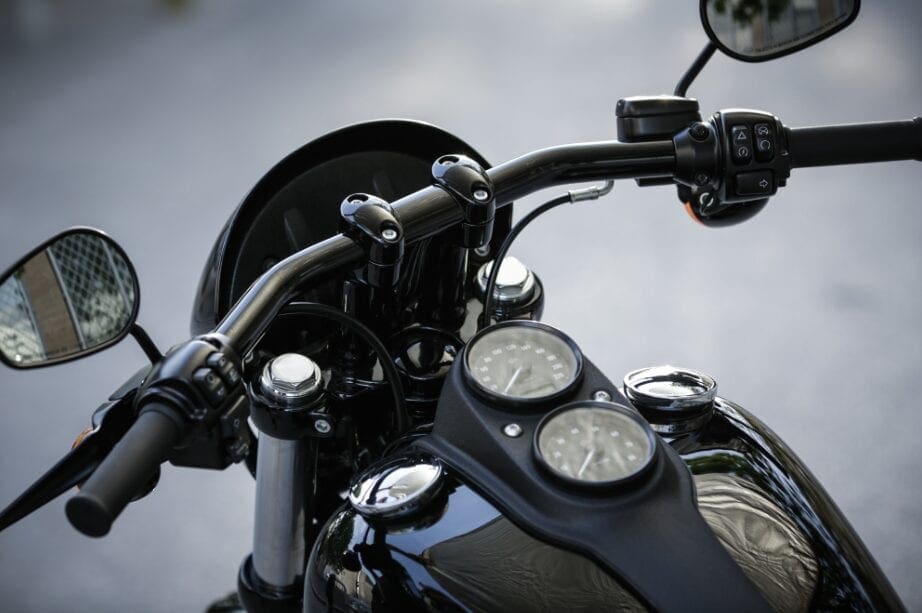 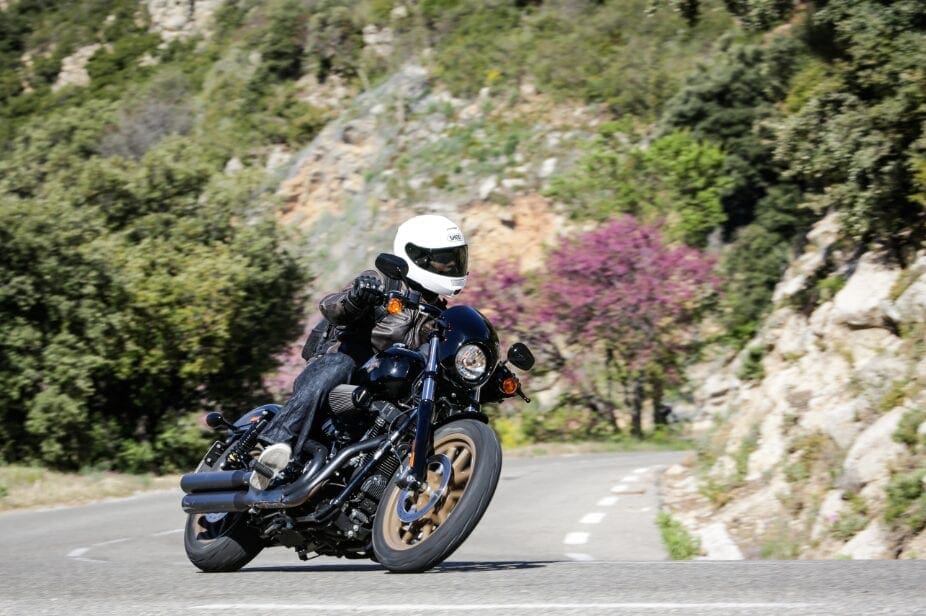