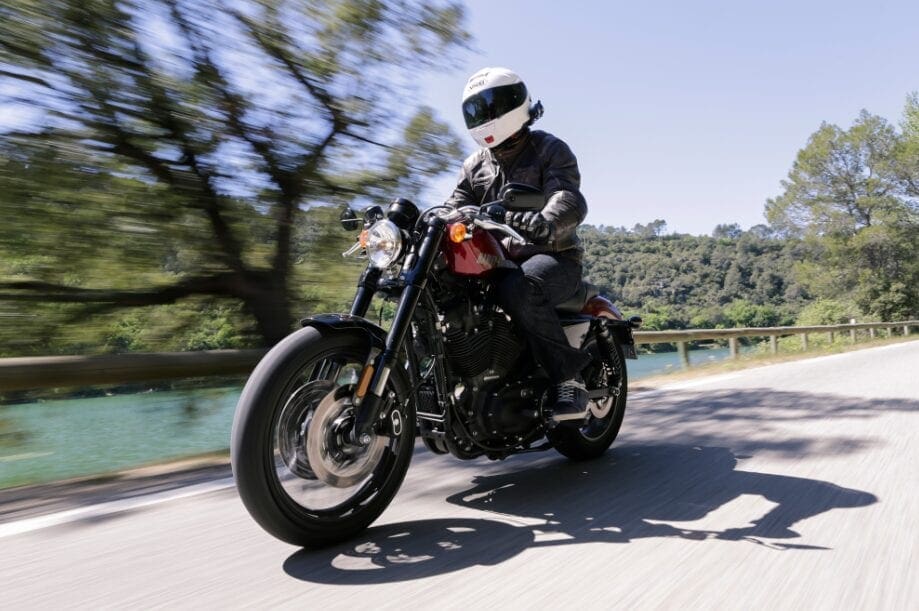 Close your eyes and imagine a Harley-Davidson motorcycle. Now take away all the chrome, strip back the clutter, black out the engine and add performance parts. It’s starting to look a lot more current, aggressive and – let’s not be coy about it – interesting, isn’t it? That’s pretty much what the iconic American motorcycle company has done with its Dark Custom bikes. Launched back in 2008, they are more edgy than the rest of the range, and can easily be customised further. The range is designed with younger riders in mind.

At the launch of the Dark Custom, New Chapter, in the south of France, Harley rolled out two models that fit the bill: the Roadster and the Dyna Low Rider S. The Roadster is a 1,202cc new member of the Sportster family and designed for a more aggressive and sporty ride, with its low bars, short wheelbase and, for Harley, high foot pegs. The latter is an upgrade to the existing Low Rider, which now features the colossal 1,801cc Screamin’ Eagle 110 Twin Cam engine and better suspension. Read the Low Rider S review here.

The Roadster is a new bike in the Sportster range. It’s aimed at riders who want the Harley look and feel, but with an aggressive, sporty performance and handling.

The stripped-back, minimalistic approach that the Dark Custom bikes share definitely takes a sportier turn with this bike. The bars are low, the ‘peanut’ tank is small, and the riding position suggests that this bike doesn’t so much sweep around the bends but attacks them mercilessly. And it looks mean! 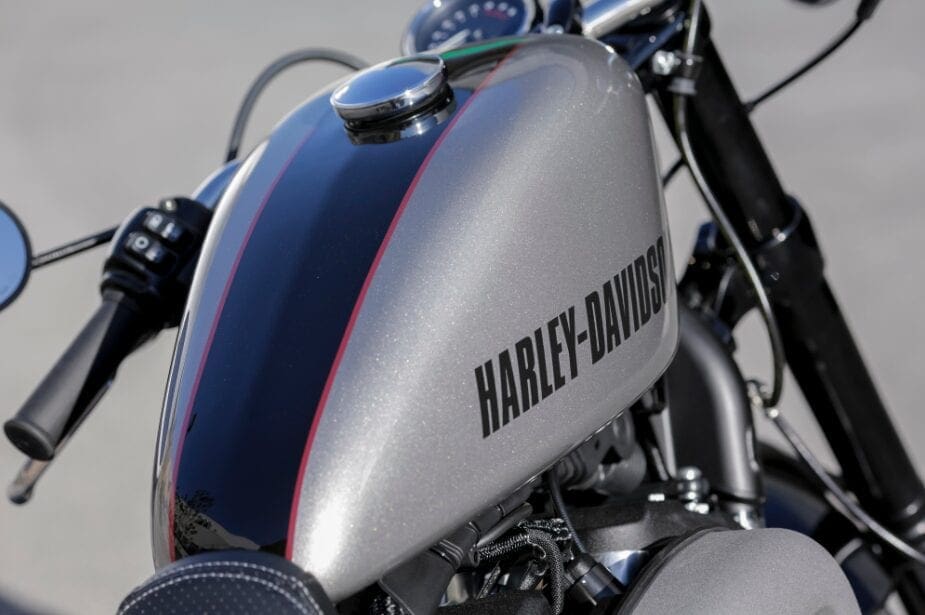 The Roadster comes in black, red or silver, with all colours looking equally stylish and menacing. The bike has been raised slightly at the back and lowered at the front to give it an aggressive stance. The low bars and relatively high foot pegs put the rider in a position that encourages a far more active ride than many other bikes in the H-D line-up.

There is no front fairing, not even a fly screen, and the rear fender is so short that the only part extending beyond the rear wheel is the licence plate holder. There’s a small pillion seat and pegs, but I’m not convinced that a pillion would be happy perched there for too long. To me, this is a bike that you ride solo, and with a bit of pace.

There’s a single clock above the headlight case, with an analogue tachometer and a digital display where you can choose trips, odometer, clock, and strangely, revs. Why this is repeated here is not clear. Surely, with a tank capacity of 12.5 litres and a claimed 48mpg, you would want a range display instead? Never mind, it all looks good, and it’s easy to read on the go. Just don’t forget to fill up regularly. 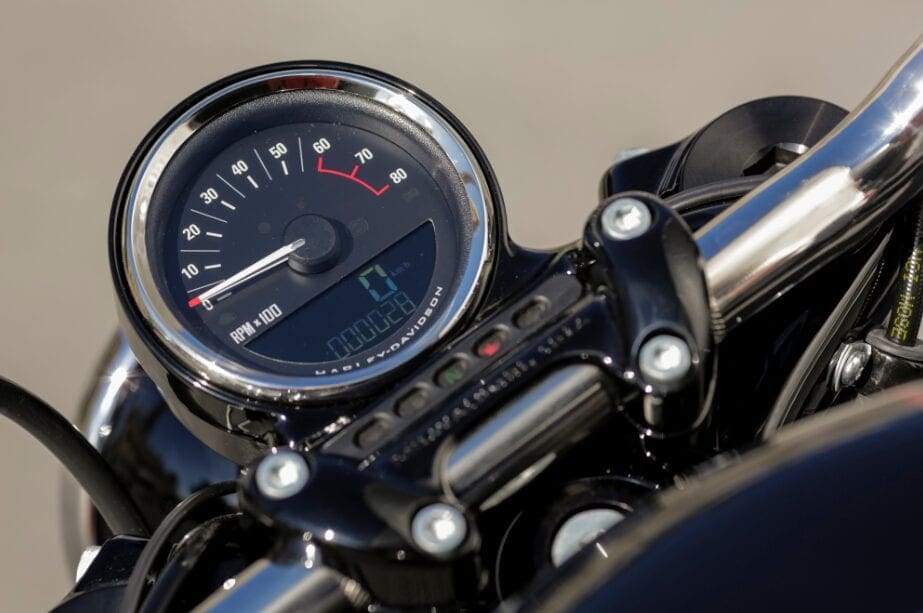 The switchgear is simple and easy to use, with the start, engine kill and hazards on the right and the lights, horn and dash selector button on the left. The indicators are split to left and right, which always confuses me for the first few miles. There’s an auto-cancel function that works pretty well, so you only need to switch them on and not worry about cancelling them.

The air-cooled 1,202cc V-twin is no lightweight. There’s plenty of power and the claimed torque figure is 97Nm (71.5ft-lb) at 4,250rpm. The peak is slightly higher in the range compared to the Harley’s bigger engines, all part of making this a sportier ride. Officially the big air-cooled engine is Euro 3 compliant, but the H-D guys at the launch confirmed that it already meets the requirements of Euro 4. The rest of the H-D engines will be compliant by the time the new requirements come into force next year.

The power is transferred to the rear wheel through a five-speed gearbox and belt final drive. The gearbox is loud but accurate, and has a nice firm feel about it. 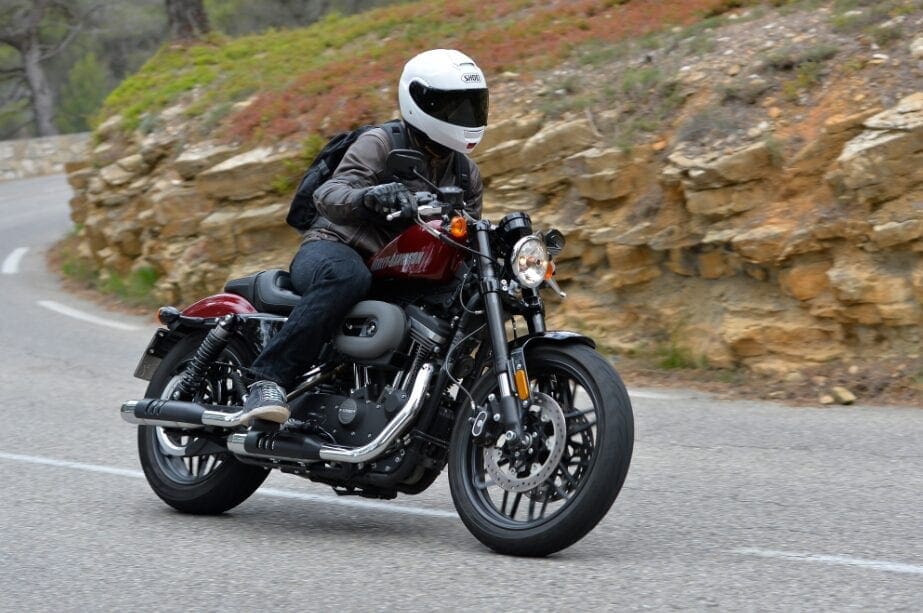 For a big Harley, the bike is light (259kg in full running order) and short (1,505mm wheelbase). It has a sharp fork angle (27.4° compared to the 32° of the Low Rider S) and it’s capable of more lean than many other bikes in the H-D line-up (31.1° on the left and 30.8° on the right). All of that combined translates into geometry designed to go fast and turn sharply.

The first thing that I noticed about the Roadster as we headed for the French mountain roads at the launch was that compared to the Low Rider S that I had ridden earlier the same day, this bike felt noticeably shorter and had a firmer suspension. At first it manifested itself as a bumpier ride, but when we hit the hairpins on our way to Saint-Tropez, the bike grew on me more and more. It allows faster cornering and stays composed for longer because of the harder suspension. Earlier on I had felt like the rest of the group were all much faster than me. Now I was flying round the corners.

Let’s make this clear: It’s still not a fast bike compared to modern sportsbikes or even the Japanese or European nakeds. But for a Harley-Davidson, it’s very nimble and agile. You can push it faster round the bends by leaning into the corner with your body. Whereas this made little difference with the Low Rider S, the Roadster is 46kg lighter (that’s half my own kerb weight), and has a more agile geometry and involving riding position, so moving on the bike makes a real difference. 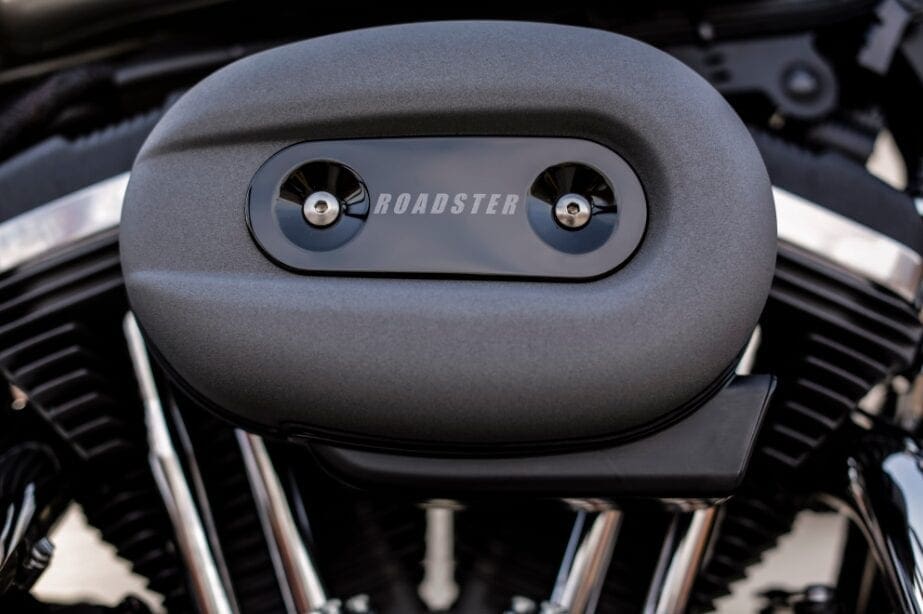 The riding position on the Roadster is comfortable, despite the sporty stance. There’s no feet-forward cruising on this bike as the pegs are pretty much in line with the front of the seat, and the low handlebars invite the rider to lean in and shelter from the wind. The seat is just on the hard side of comfortable, but still very tolerable for long distance riding. If it was my bike I might be tempted to look in the massive H-D catalogue and pick a single seat, partly to add comfort, partly to further improve the looks, and partly to help anchor my derrière to the seat even more securely. The latter is because, with nothing to grip with your knees other than the shiny, slippery tank, during hard braking it’s difficult not to push against the handlebars to stay put, and that lessens the stability of the bike.

Is this bike for you?

The Roadster is an impressive bike in many ways. It combines the Harley looks and sound with surprisingly nimble chassis and modern handling. At the end of the day, it’s a bike that you buy as much for the aesthetics and H-D heritage as the performance, but that doesn’t mean that it won’t put a smile on your face as you open the throttle and hear the engine scream. At £9,695 it’s fairly competitive against the big European and Japanese naked bikes – and this one comes with bags of attitude that only Harley-Davidson can deliver. 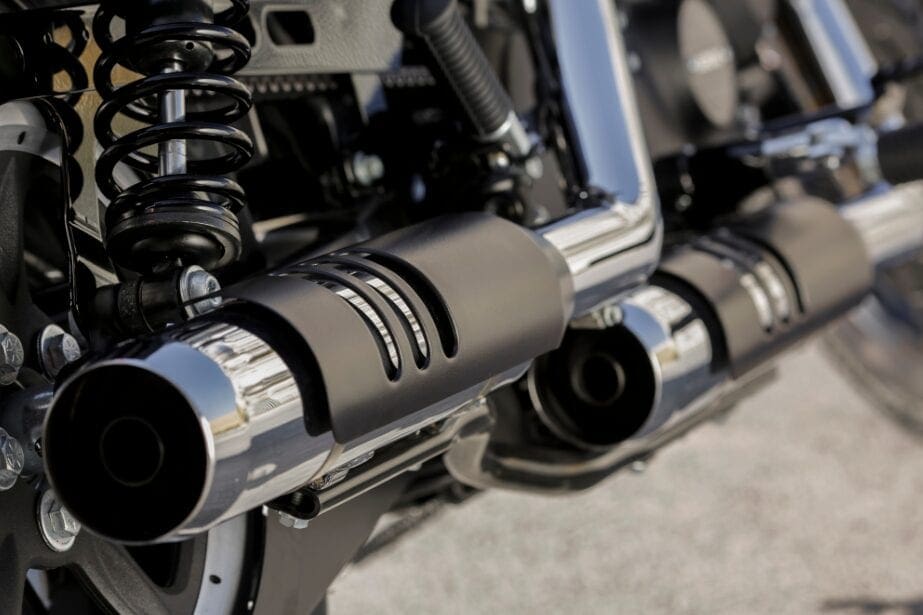 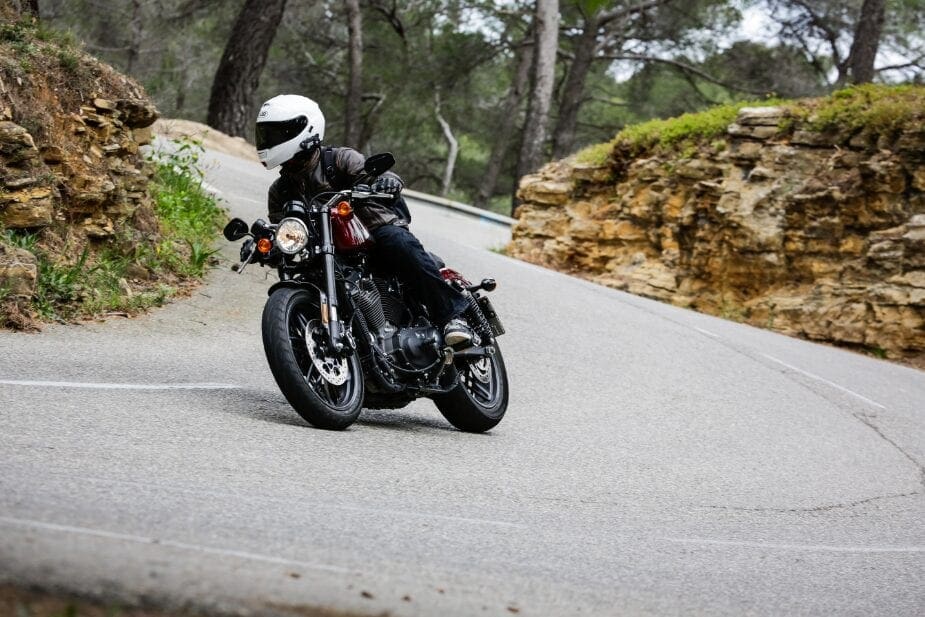 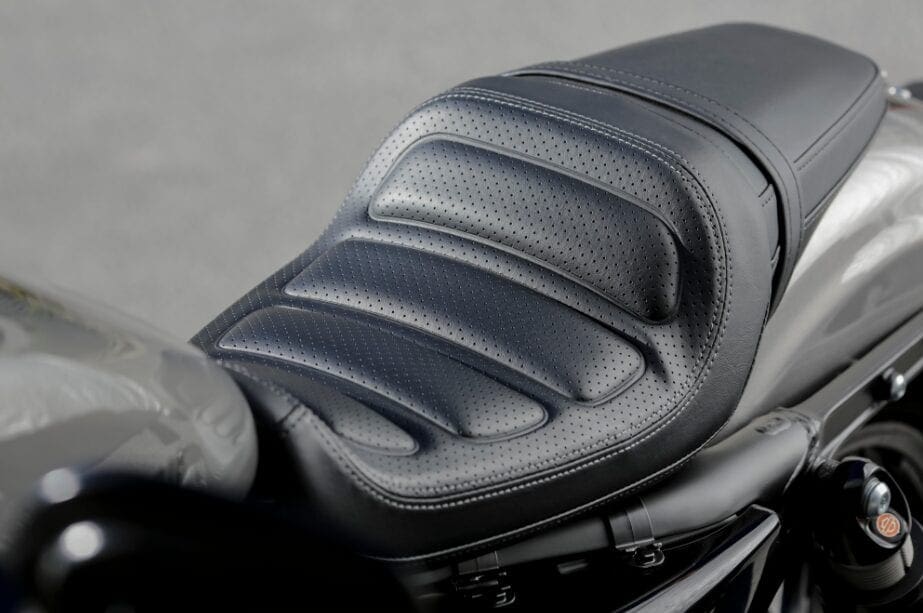 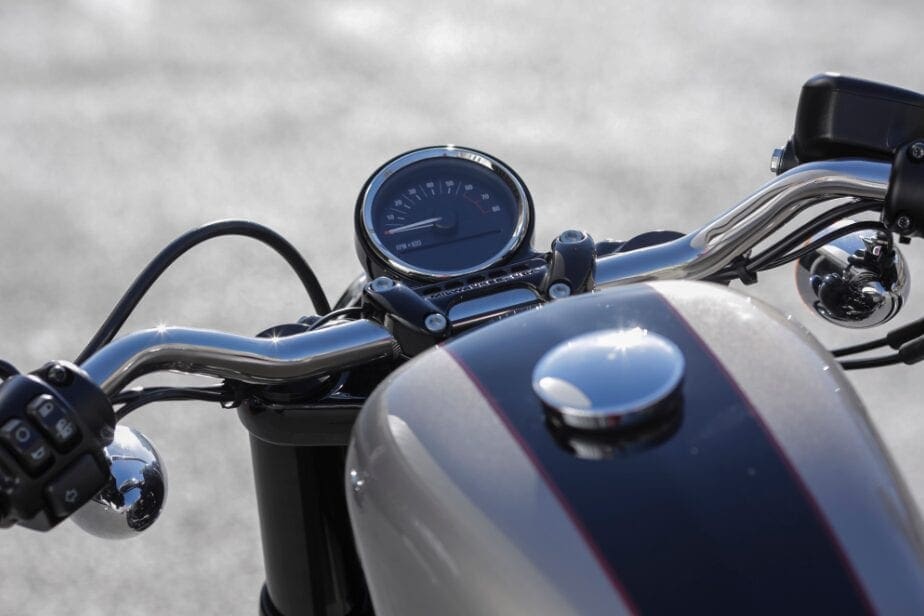