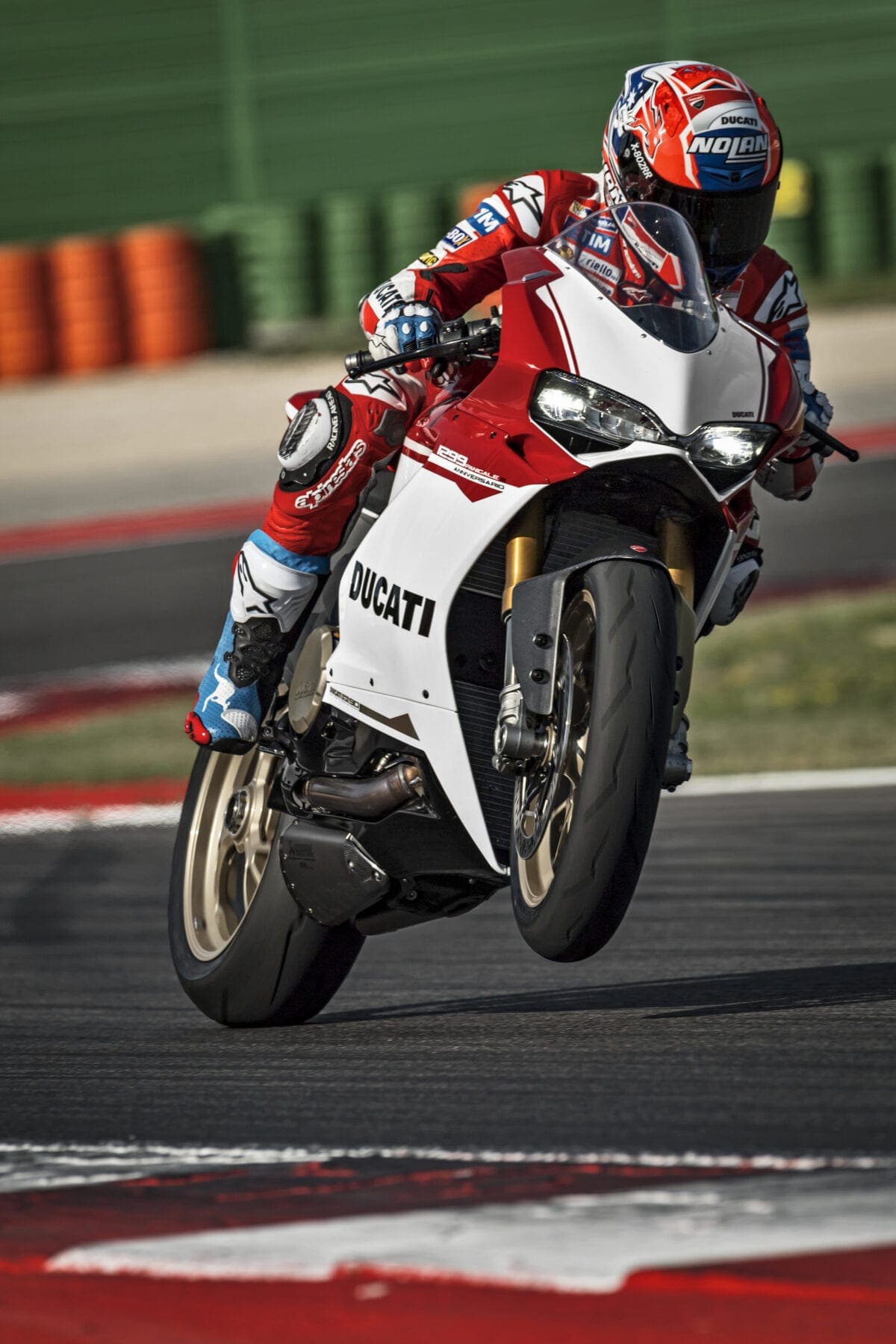 Ducati certainly knows how to please their fans and celebrate an anniversary. For its 90th anniversary the Bologna-based bike manufacturer decided to provide visitors to World Ducati Week 2016 (1-3 July, “Marco Simoncelli” Misano World Circuit) with a special preview of the new 1299 Panigale S Anniversario. This is a limited edition bike with only 500 being released. The bikes will be available from the second half of July, but with the limited run, they are likely be snapped up pretty quickly.

Here are all the details of the bike from Ducati:

The limited-edition 1299 Panigale S Anniversario (just 500 bikes will be made) features an all-new colour scheme and technical content.

Other distinctive features on the 1299 Panigale S Anniversario include its top triple clamp and steering head inserts, both in machined-from-solid aluminium alloy. 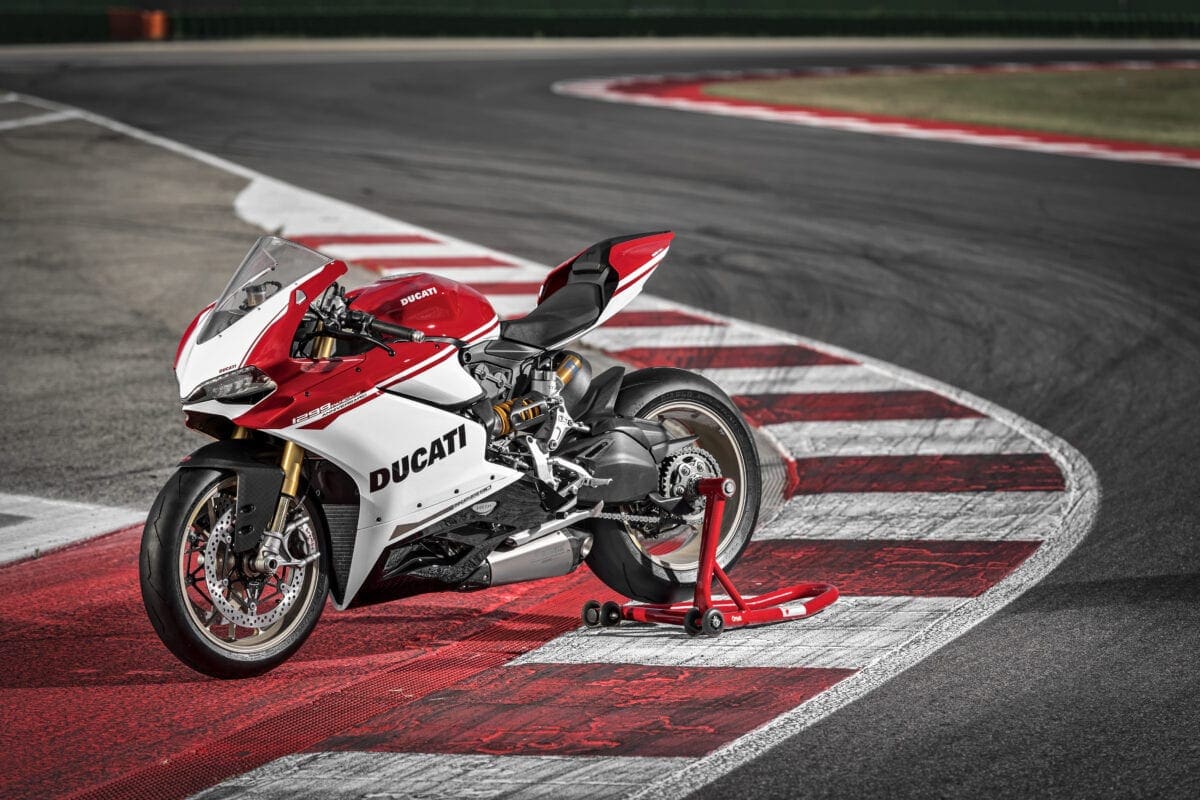 Each top triple clamp is unique in that it has been laser-etched with the bike’s unique production number of 500. The steering head inserts shift the front wheel forward 5 mm, giving the same chassis geometry as the incredible Panigale R.. Moreover, a light lithium battery, together with carbon fibre heel guards, rear mudguard and shock absorber cover reduce weight by 2.5 kg.

In addition to the new DTC and DWC EVO, the 1299 Panigale S Anniversario also features Bosch Cornering ABS, which ensures performance and safety whatever the riding conditions, plus Ducati Quick Shift (DQS) for ultra-fast clutchless up and downshifts on both track and road. The twin-cylinder, 1285 cc, 205 hp Superquadro engine features Engine Brake Control (EBC), which optimises vehicle stability under extreme turn-in conditions. The suspension department, instead, offers up Ducati Electronic Suspension (DES) and Öhlins Smart EC; the latter is an event-based control system that processes information about the bike and accordingly uses stepper motors to dynamically adjust the suspension set-up during riding, improving cornering grip, stability, braking, turn-in, handling and riding comfort. 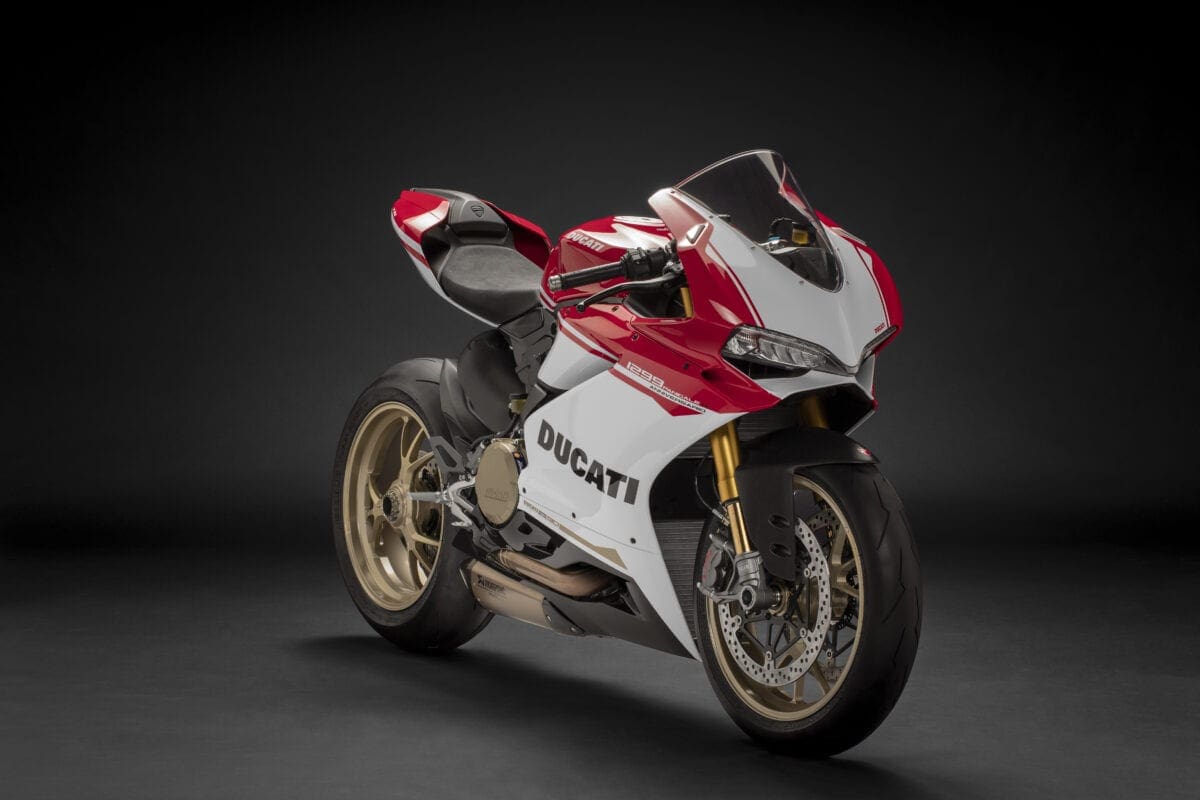 Like all bikes in the Panigale family, the 1299 Panigale S Anniversario makes excellent use of monocoque frame technology. The compact, enhanced-strength die-cast aluminium monocoque structure features the Superquadro engine as a stressed member of the frame.

To emphasise the sports performance of the 1299 Panigale S Anniversario even further, the bike comes with a racing kit consisting of an Akrapovič Racing exhaust in titanium, billet aluminium mirror blockoff plates, and a cover for the hole created by removing the license-plate holder for track days. Lastly, a battery charger is also provided. 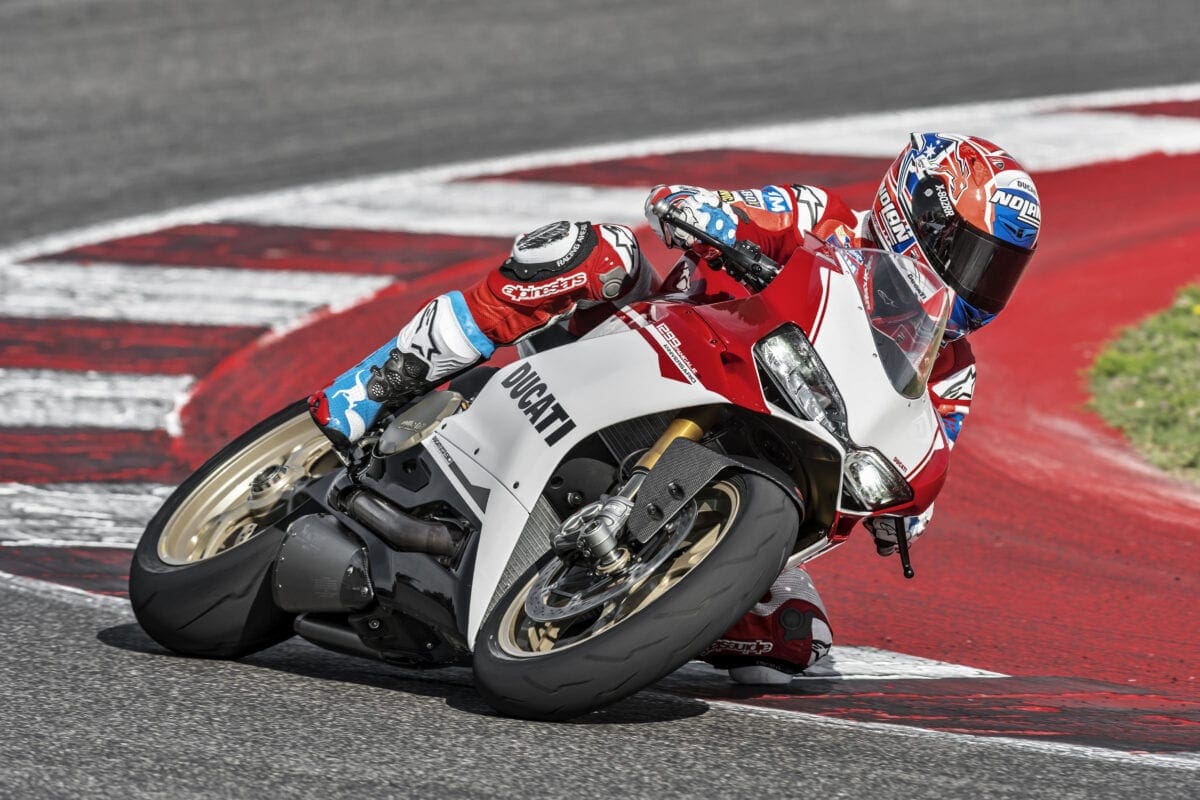 The 1299 Panigale S Anniversario will be available from Ducati Dealerships starting in the second half of July (country specific).

DTC EVO, based on entirely new software algorithms, becomes both more precise and consistent in its intervention. It interfaces with the 1299’s Bosch Inertial Measurement Unit (IMU), sensing at all times the bike’s lean angle and using that to judge the required intervention more accurately and so allow an ideal amount of slip for the rear tyre (according to the selected DTC EVO level), providing increased precision. And when the system does intervene, reading the lean angle ensures that it does so consistently and repeatably in the same riding conditions.

Furthermore, DTC EVO adds the ability to intervene on the butterfly valves in the motorcycle’s throttle bodies, in addition to altering spark advance and fuel injection. Under conditions in which high-speed intervention of the DTC EVO system is unnecessary, closing of the butterfly valves allows the system to manage traction while maintaining optimal combustion parameters, resulting in smoother intervention and engine response.

On a simple traction control system, when tyre slip is sensed the system intervenes to control it. As the tyre grips again and slippage stops, the system reduces its intervention until slippage occurs again, and the cycle repeats. This results in a graph of system intervention that, viewed in detail, shows oscillation around a theoretical “line of perfect intervention” which is the precise limit of traction:

DTC EVO reduces the magnitude of these oscillations to bring system intervention closer to this line of perfect intervention:

This is especially advantageous under conditions of varying traction, such as the changes in rear tyre grip as it is consumed. 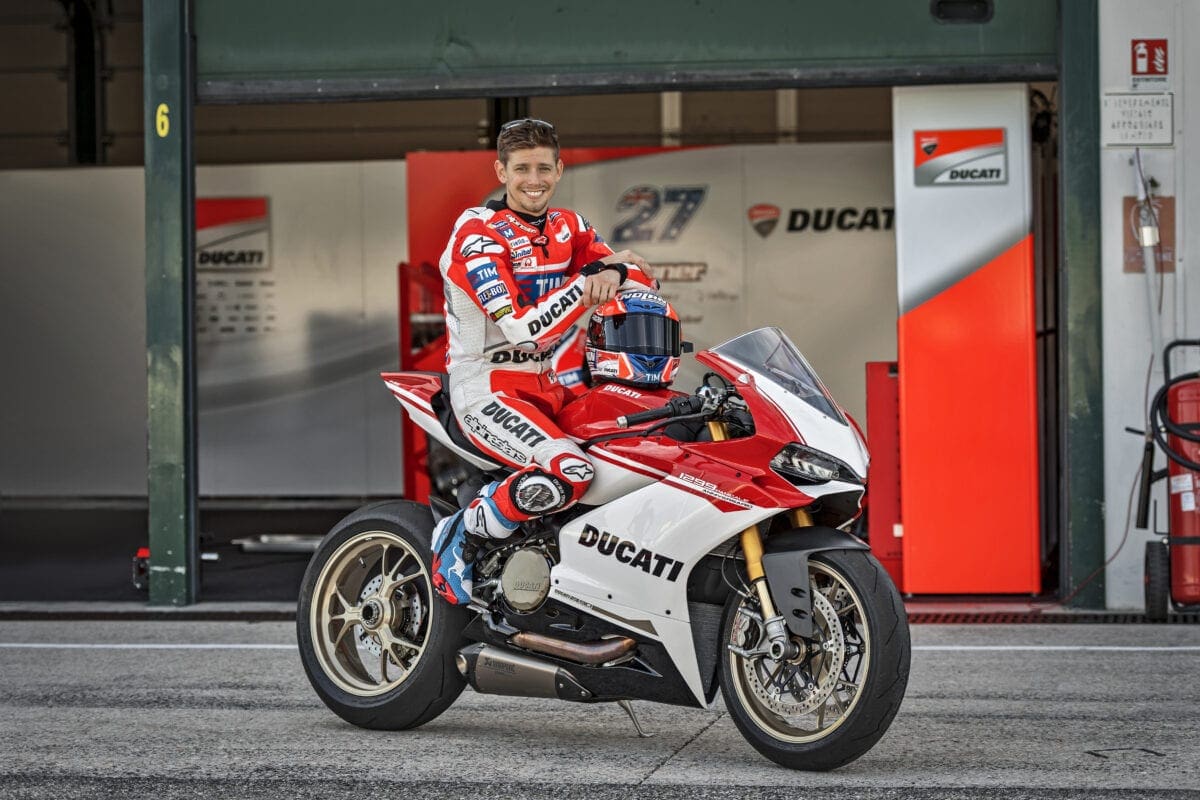 In addition to this increased precision of intervention, when set at level “1” DTC EVO adds a new functionality, allowing a rider to control the bike at a level formerly available to only the most advanced riders and professional racers. While the bike is leaned over in a turn, the rider can use the throttle to dial-in additional rear-wheel slip beyond the “normal” level of intervention – thus further pivoting the motorcycle around its front wheel, and closing the trajectory of the turn. DTC EVO in level 1 allows this pivot to occur, effectively allowing rear-wheel steering with active traction control.

By increasing consistency and precision of intervention, and opening up a whole new way of adjusting the bike’s dynamic behaviour, DTC EVO gives the 1299 Panigale S Anniversario maximum cornering performance and acceleration with the highest level of safety.

Complementing the DTC system is DWC EVO, which uses information on the 1299’s pitch from the Bosch IMU to control front wheel lift and allow maximum acceleration in safety. Using entirely new software, DWC EVO more accurately detects the occurrence and severity of wheelies and intervenes to control them with a high degree of robustness and precision. 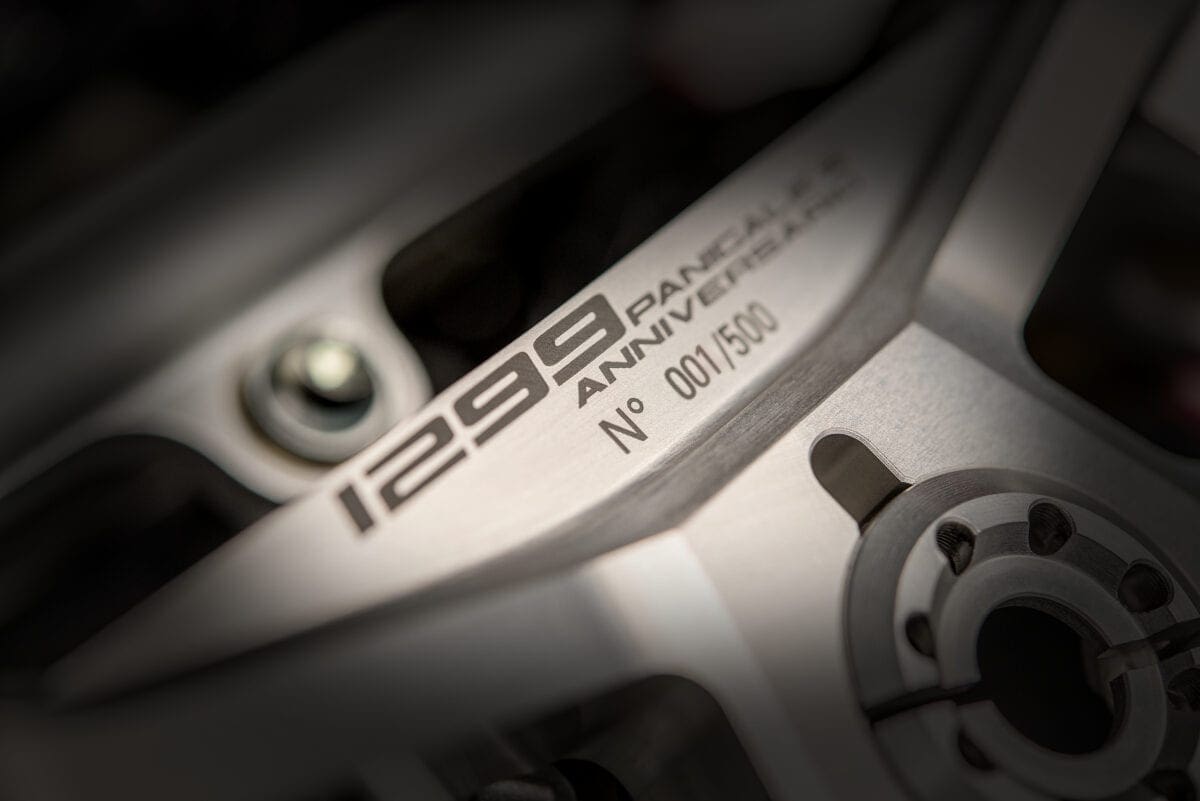