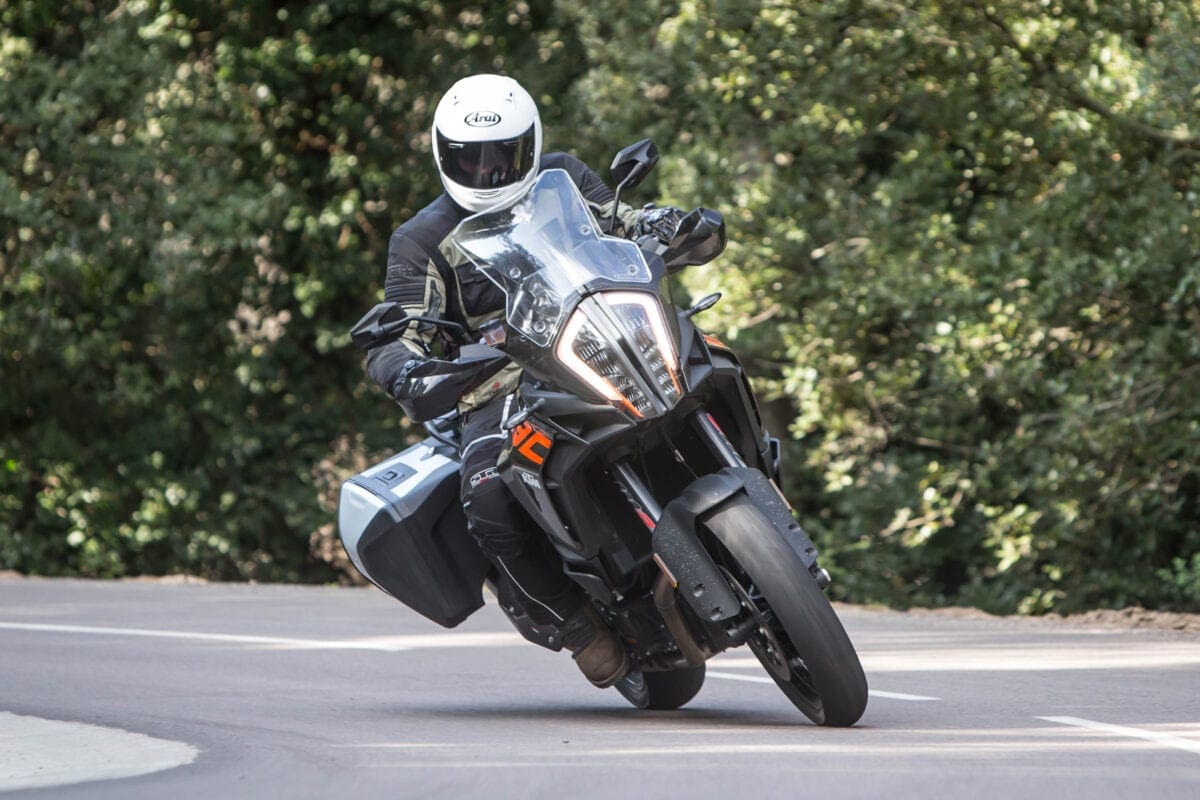 The rethink makes sense – the £10,999 1050 was considered (incorrectly) by some buyers to be underpowered at 94bhp. The 1190, at 148bhp and £12,999 with electronic suspension and cornering ABS represented better value to many, while the 1290 Super Adventure, making 158bhp and costing £15,999 was the top of the line, big-mile machine. There was little space between the bikes on paper, and bringing the 1090 up to 123bhp made it an even more narrow margin. Plus the 1190’s engine was based on a different platform, so using a more modular design helps save some money. The 1290 Super Adventure S costs £14,299 – pricing it between the two bikes it’s evolved from, and making a much clearer choice between the two adventurers now in the range. Oh, and unlike the previous Super Adventure, it has cast instead of spoked wheels. “We think that this is the bike for a rider who spends most of their time on the street,” said head of product marketing Adriaan Sinke.  “But they might end up in a country where the roads aren’t very good, or they need to spend half a day on the dirt… it’s no problem with this bike.

“We’re thinking where the new 1290 Super Adventure S fits in the market. There are a lot of bikes that are tall, have wide bars, and have cast wheels. But they all have 17” wheels, with relatively limited ground clearance, and are really 100% street bikes. We’ve decided to keep this bike off-road capable. Obviously you can’t ride it as hard off road as a Super Adventure R [the spoked wheel version], but it’s still a KTM Adventure – if the road stops you can keep going. 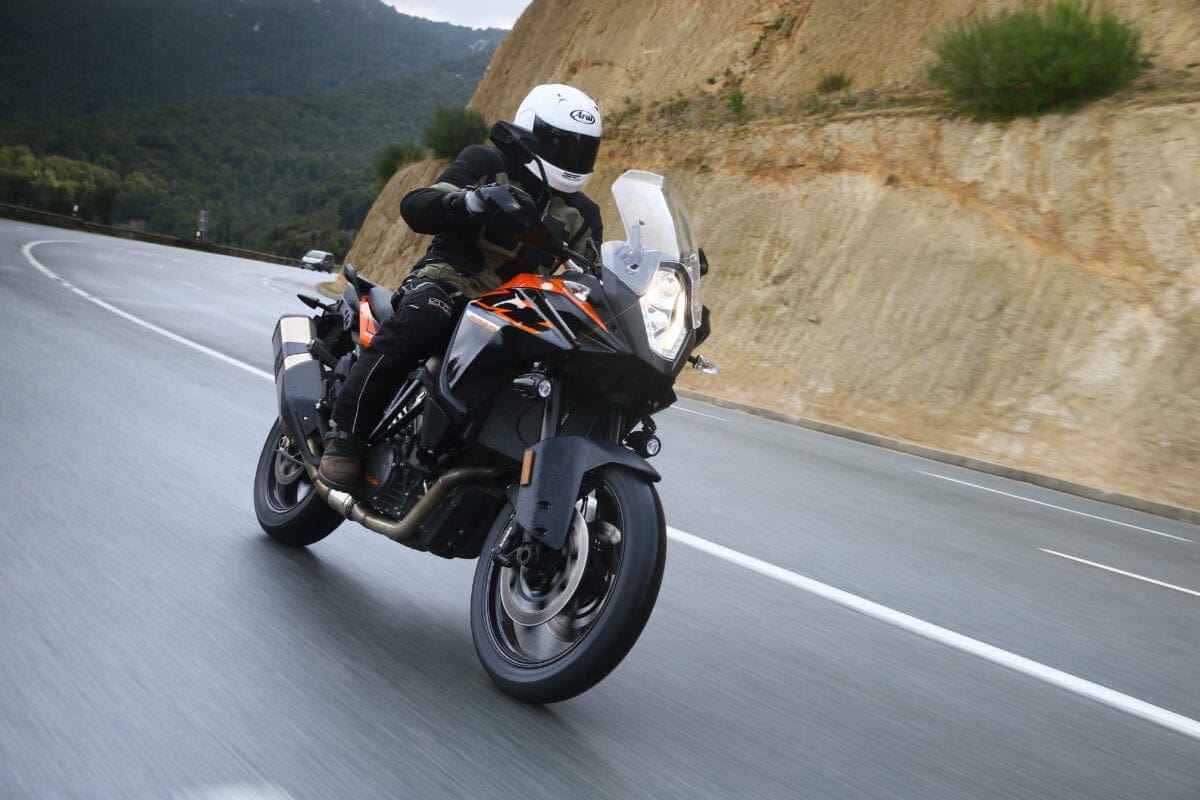 Our bikes were all fitted with the £584.40 Travel pack, which includes the MSR that opens the throttle when necessary to prevent the rear wheel from locking under harsh downshifts and abrupt throttle chopping – basically, it does a similar job to the slipper clutch, but on surfaces with severely reduced grip. Also included is KTM My Ride, which links your Bluetooth smartphone to the dash to control music and receive incoming (but not initiate outgoing) calls. By featuring two Bluetooth chips, it can link to both the rider and pillion’s helmets. 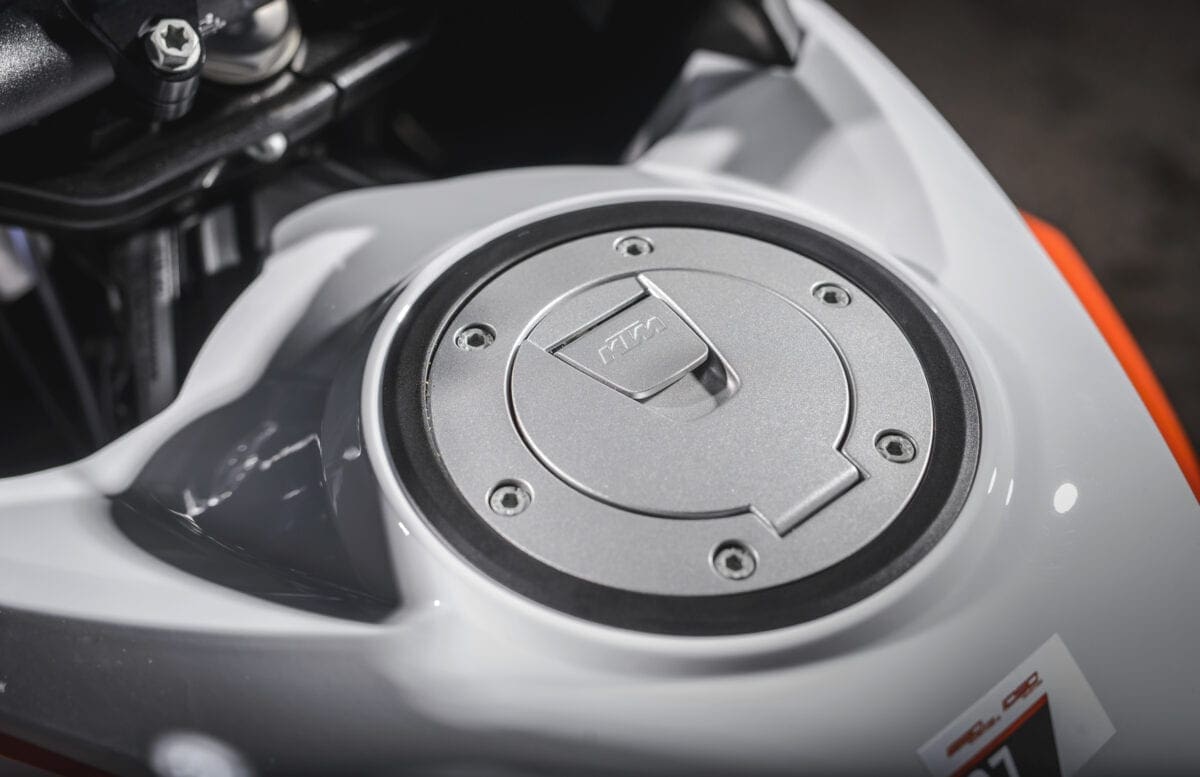 The pack’s Quickshifter+ allows clutchless up and down shifts – I found it took a while to get used to, especially after jumping from the 1090, as the ignition cut is quite sensitive to your boot, but once acclimatised, it’s far more valuable than just allowing for racier changes; riders will find their smooth cog swaps don’t cause the pillion to knock helmets, making for a much more pleasant ride.

Downshifts require quite a positive stamp on the lever, and while I’m sure I’d get used to it, I still preferred to use the clutch. For the upshifts alone though, it’s worthwhile.

Hill Hold Control (HHC) is the final part of the Travel Pack (whose features are also all available separately) – this identifies if the bike is on a slope and at a standstill, automatically keeping the brakes applied for a few seconds after they’re released – for instance as you let go of the lever to turn the throttle – until the engine’s drive overcomes gravity. It’s a useful system for steep roads, especially with a pillion, though I did find it frustrating when turning around in the road at one point – I rode across the lane, but then found myself unable to roll back into the lay-by, as the HHC kept me in place. Combined with the electronic damping, which made it very difficult to bounce the front forks and rock the bike back into place, the tech that proved so good elsewhere was frustrating when it came to manoeuvring the machine around. 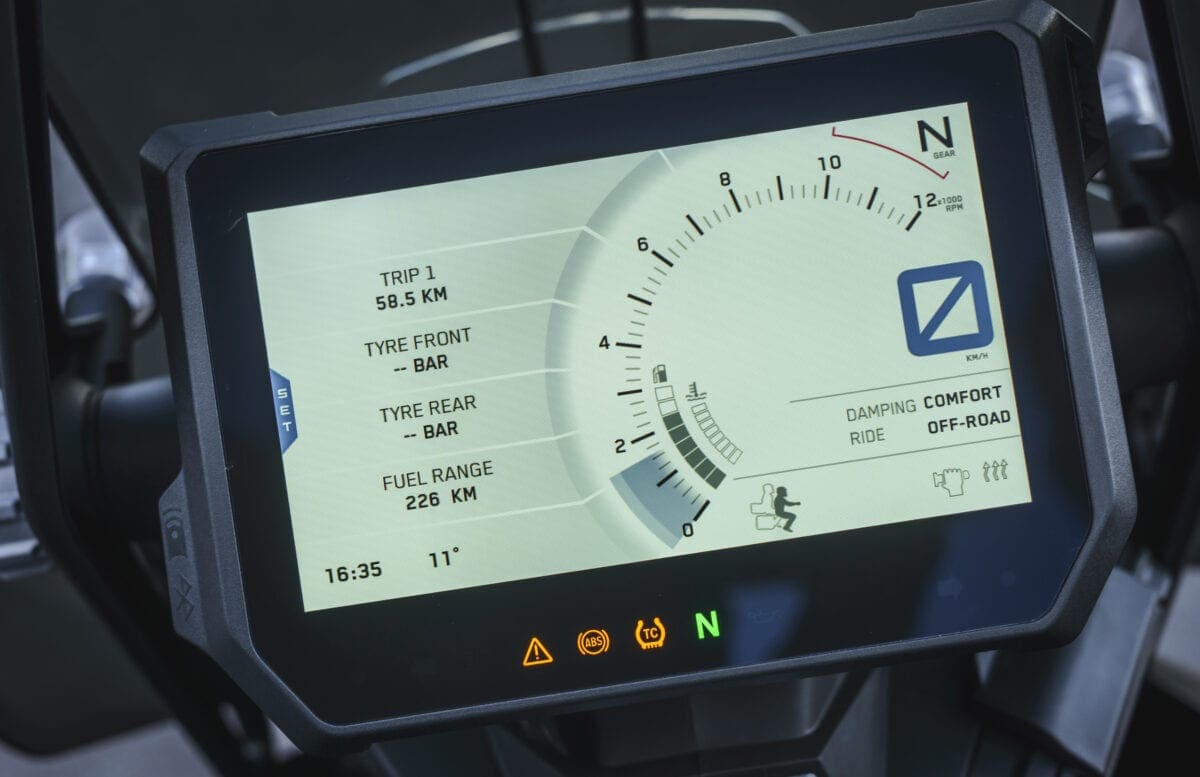 Besides its slimmer shoulders, the new 1290 has a very striking front thanks to the full-LED headlight. Incorporating the previous model’s cornering lights into the main body, rather than the fairings, three LEDs on each side progressively illuminate as the bike tips, keeping the apex lit up at any lean angle. The lamp unit is built around its large central aluminium body, which acts as a heatsink, and allows the technology to fit in such a small space.

If you’ve never used cornering lights, they will transform your opinion of night riding – we rode through a pitch-black forest to try them, and they made for much safer, faster progress. It’s as good if not better than other factory-fitted systems, though I occasionally found it a touch slow to illuminate the next stage, leaving me looking to a dark corner for a fraction of a second before the next LED lit up. The flat line of the dip beam is also a little overpowering compared to the cornering lights, but they work with main beam too, unlike my aftermarket JW Speaker unit that’s brighter, but can’t work on main (regulations say a motorcycle headlight has an upper limit of total light output). Most riders agreed that besides being a neater system than the previous model, the lights did a better job of illuminating the approaching corner, rather than the ground closer to the bike. 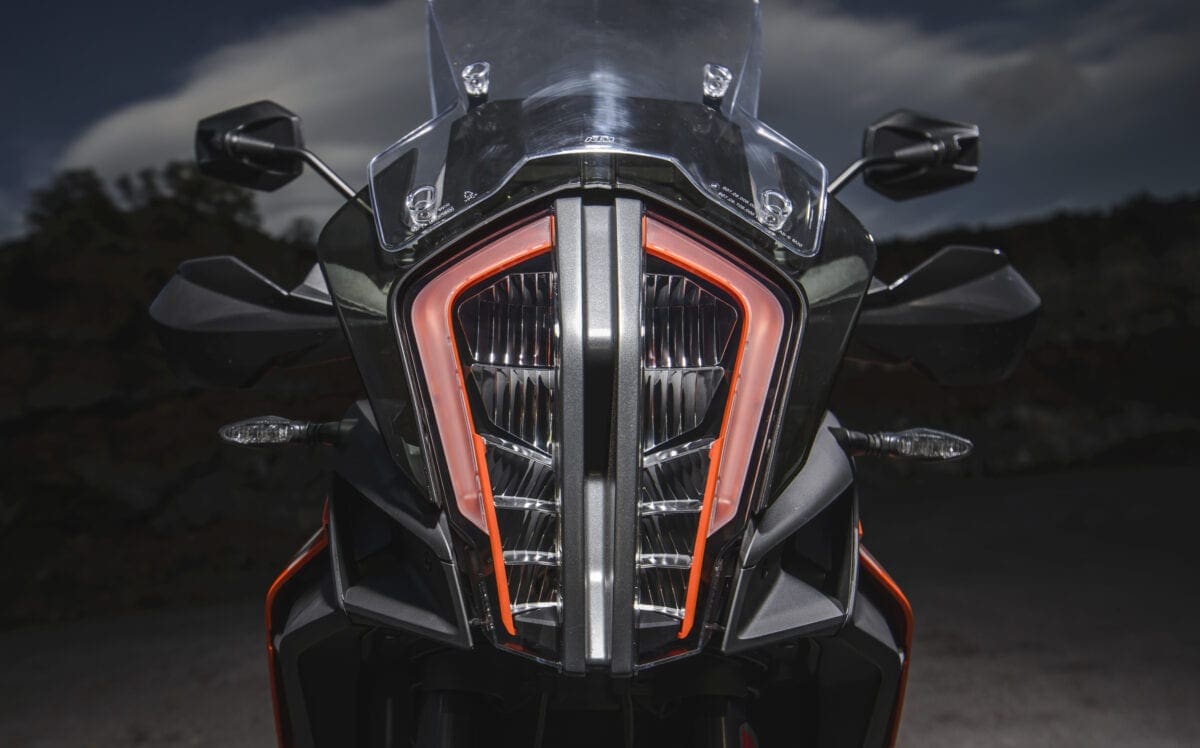 I expected the 158bhp Super Adventure to be intimidating, but having ridden the utterly composed (and stunningly exciting) Super Duke and Super Duke GT, I should have known better. Many riders hate the idea of electronic control systems, but KTM is one of the industry leaders in maintaining the feel of riding an unadulterated bike. The awesome thrust of this massive twin never feels neutered, yet the electronic brain’s clearly working – we rode on some nasty, greasy routes during the test, but I never wished for a less powerful machine. I rarely bothered switching from sport, to the more docile street or rain modes. Switching between modes is simple though, especially if you’ve programmed the menu as a direct action from the up or down button on the left switchgear. 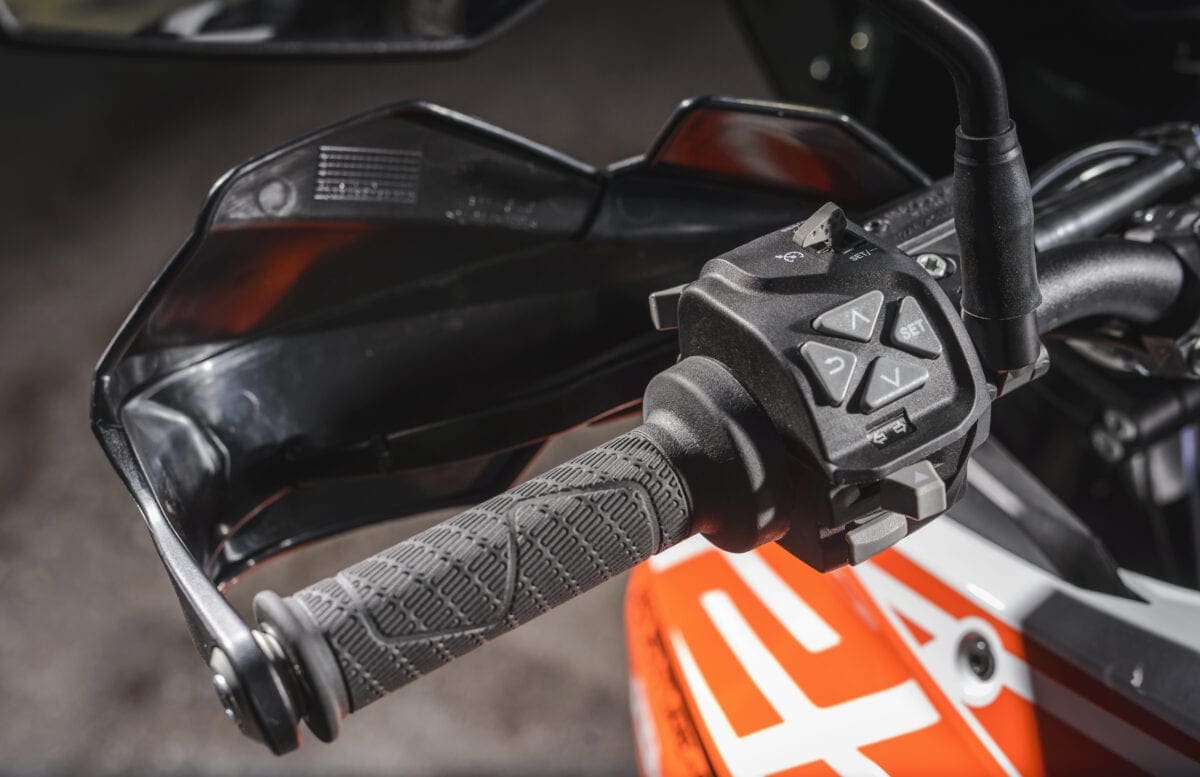 Our bikes also had the damping mode instantly accessible – you can choose from Sport, which gives the most pitch under acceleration and deceleration, to street, comfort (which keeps the bike more level), and off-road, which is most like standard damping. You can also set the shock’s preload electronically to suit your cargo, but there’s no facility to fine-tune any settings. Not that I’d suggest you need to – the suspension is unintrusive and effective, never making its electronic adjustments known while riding (except when trying to bounce the bike back off the forks to roll backwards of course), even as it smoothed out some seriously rough and Tarmac. At one point the rider behind said at the next stop “That was a massive pothole you went through – the water really sprayed out.” It’s all credit to the WP semi-active suspension that I didn’t know what he was talking about.

This is a confidence-inspiring bike. Even the most cynical of journalists were raving that it’s possibly the best bike they’ve ever ridden – an incredibly smooth, powerful motor combined with the security of some of the world’s best Bosch electronic safety systems. 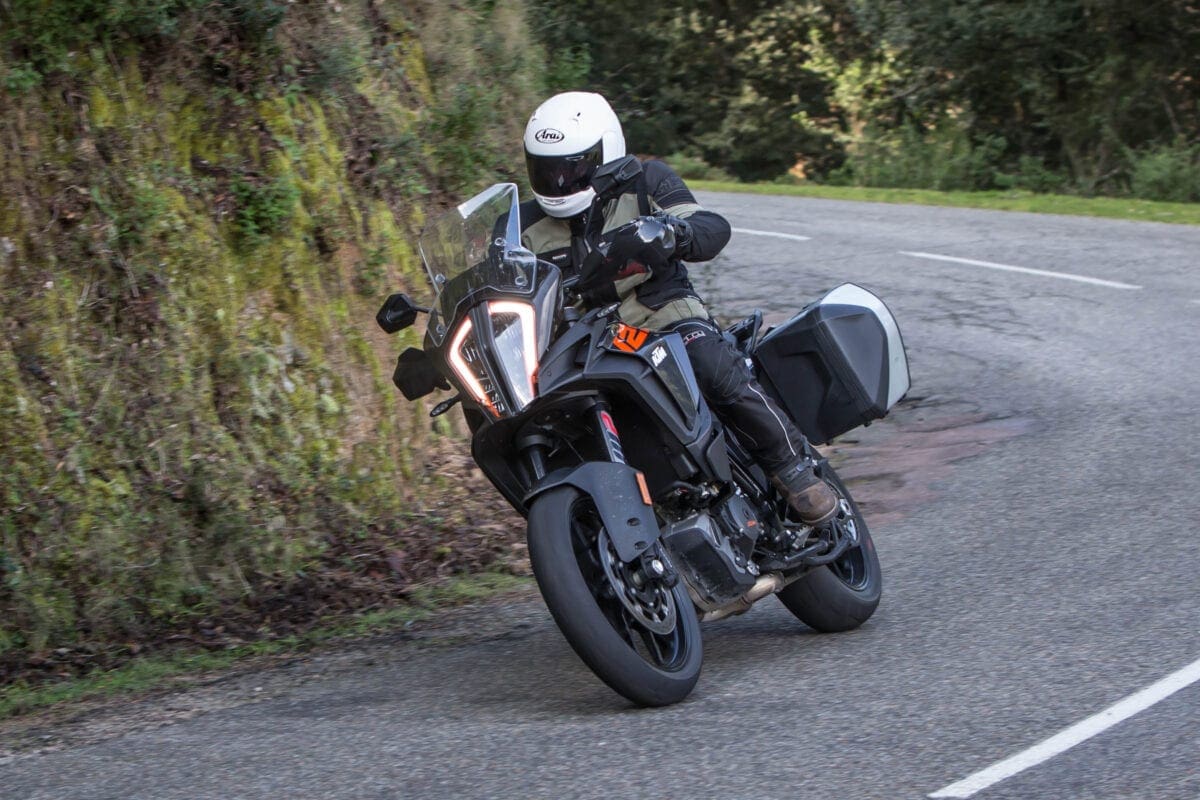 But it’s not uncrashable. Before us, a French journalist ran wide, hit the grass and was spat off into a ditch. Two British journos came off too – both in the wet, in what appeared to be accidents caused by throwing the bike into the turn too aggressively. I saw video from one, and it looks like the front-end folded as he flipped fast from one direction to another… the best suspension, traction control and ABS can’t beat momentum.

The 1290 Super Adventure S could well be considered the ultimate sports adventure machine. By reducing its size from the previous model, yet keeping the incredible engine, KTM has produced what is undoubtedly a stunningly powerful, attitude-packed yet practical, versatile bike. It’ll make a mockery of sports machines on most roads, then happily carry a couple and all their luggage on a world tour. It’s more than capable on every road and track that 99% of us will realistically ever ride, but it’s manageable and adaptable enough for the majority of buyers. A truly awe-inspiring piece of engineering.