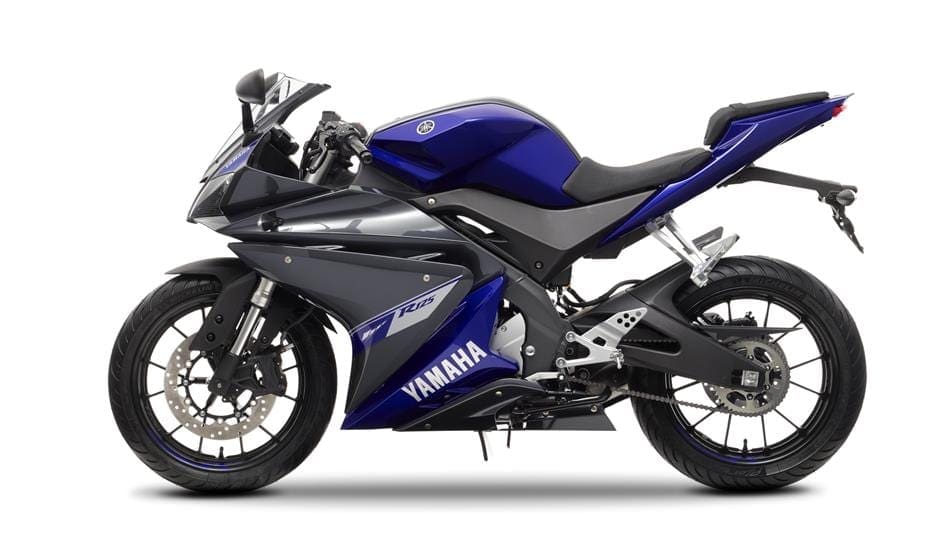 It was a long time coming. Yamaha’s last saucy 125 was the 1990’s TZR125, a machine which was lusted after by the then learners who’ll now be in their 40s. I know, I was one of them. It took until 2008 for Yamaha to make a racey road-oriented 125 which would be lusted after by another generation of teenagers desperate for a slice of performance biking. Honda’s four-stroke CBR125R sold in droves for several years unchallenged and must have been partly to thank for Yamaha to want in on the sales… and come up with this beauty.

Designed, developed and produced in Italy, the R125 is aimed at the European market and the more European sized rider – which is good news for us Brits. The seat height is even higher than Yamaha’s own middleweight R6, so bear that in mind if you’re not overly well endowed in the leg department. Just like the two-stroke TZR125s of the 90s, the baby YZF has an enthusiastic following of performance-minded learners, not to mention a healthy aftermarket supply of cosmetic and power enhancing add-ons.

Engine: The engine in the R125 is manufactured by Minarelli and has earned a reputation for being a strong little unit – even with the majority being thrashed by performance seeking first timers. Performance from the 15bhp motor up to 55-60mph is more than respectable. Keep the revs above 6000rpm and it’s very sprightly, but ridden in this way fuel economy isn’t brilliant, dipping to 60mpg. With a less manic riding style the R125 will typically return 80 or so mpg (Honda’s CBR125R will return over 100mpg without trouble but only produces 13bhp – every extra pony counts at this level).

Taken in context, the engine performance is very good and is one of the best 125s out there from a thrills perspective. Of course, you’ll still need to keep on top of the gearbox to keep the engine on song – see, not all things have changed from the days of the two-stroke Yamaha TZR125.

However, gone are the days of chucking a set of Boyesen reeds into an oil-burner’s reed block and fitting a noisy pipe; the R125’s engine is fuel injected which needs additional equipment to adjust. And just like in the early days of the 125cc learner law, big bore kits are available for more power (for those who’ve passed their test obviously). Both 150cc and 182cc big bore kits are available, and provide a noticeable increase in power. The 182cc Malossi kit requires a different exhaust and a Dynojet Power Commander to get the fuelling right.

Handling: While the R125 may ‘only’ have a steel chassis, the Deltabox main frame and aluminium swingarm do a cracking job, giving the bike class-leading handling – this is quite possibly the best handling 125 on the market. Despite a lack of adjustability in both the forks and the rear shock (which it doesn’t really need anyway) the bike is a joy through the bends, giving the feeling of being on an extremely light sports bike (which it is). The only time you remember you’re on a 125 is when winding the throttle open or going for an overtake.

Ride: The R125 experience is one of capability. This is a bike which doesn’t look like a 125 and doesn’t ride like a 125. Yamaha got the damping just right, to give a sporty ride which doesn’t rattle your fillings over bumps and potholes. It handles better than Honda’s CBR125, and feels far more like a ‘big’ bike. In fact, the R125 has similar proportions to its bigger brother, the YZF-R6, and it’s a welcome change to have a learner machine sized for normal riders. If you want a bike which takes you away from the feeling of being on a moped or learner machine, this is the one.

The limited steering lock can make life interesting when doing a u-turn on a narrow road, so you might want to practise before taking your test on it.

Some owners try to squeeze a 110 front and 140 rear tyre onto the R125’s rims, but this isn’t a recommended fitment and may adversely affect the handling. This front tyre size will also rub on the front mudguard.

Equipment: The dash sports a digital display which includes speed, fuel level and distance on reserve as well as the normal trip meter. There’s no kickstart – this is electric start only.

The OE Michelin Pilot Sporty tyres draw criticism for grip, especially in the wet. Many owners swear by the Pirelli Sport Demon or Bridgestone BT45 – although they reportedly don’t last for as many miles as the Michelins. The mirrors are vibey and have a habit of coming loose. There’s a huge list of mods which owners carry out, from LED valve caps through a tail tidy to big bore kits, Power Commanders and exhausts. The most common mods are a tail tidy and noisier exhausts.

Finish: Top notch. That’s not something you might expect from a learner market 125 but the YZF will fly through multiple winters, and with a generous cleaning regime a 2008 model should still be in sparkling condition. If not, it’s a sign of little maintenance on behalf of the seller/previous owner. Of course, as with any faired machine it’s worth looking under the fairing to see what’s what. A bike which has never had the fairing off could well be a festering corrosion pit under the shiny panels.

What to check: With any learner machine it’s worth checking the fasteners for damage from new riders who’re also learning how to use the right sized spanners. Expect nuts and bolts under the fairing to be seized, so go for the best looked-after machine you can find. The engine can take the abuse of being at maximum revs everywhere, as long as it’s been fully serviced. Check for the stamps in the book. The chain and sprockets don’t have a reputation for a long life so check for hooked teeth on the rear sprocket and if you can pull the chain away from the sprocket at the three o’clock position they’ll need replacing.

Value for money: Buy a two to three year-old model with any of the extras (exhaust, tail tidy etc) you want already fitted, it’ll save you hundreds.

Servicing/maintenance: Dealer servicing is every 3500 miles with oil changes every 1800 miles (oil filter every 3500 miles). The owner’s manual describes the oil change in detail so owners are expected to do this interim 1800 mile change between dealer services. 1800 miles equates to roughly every seven tanks of fuel, so the cost could soon rack up if you take it to a dealer for this additional oil change. The good news is it takes less than a litre of oil.