Hardcore Harley devotees best look away now. Flag-waving Trump supporters probably won’t be impressed either, but for many riders – particularly those a little younger – be they open-minded new bikers, or indeed anyone looking for their first Harley, this could well be a game-changer. 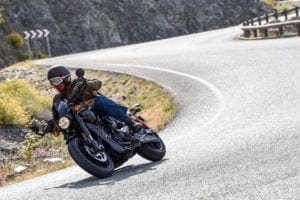 This bike handles. It’s powerful, its got decent suspension, and it’s comfortable. And I don’t mean for a Harley. I mean that it’s great when you keep in mind that it costs just £6745. That’s not much more than an MT-07. And it’s a grand less than a Triumph Street Twin.

Let’s deal with the naysayers first. About half of all the bikes on US roads are Harley Davidsons, so the company needs to encourage new riders into biking – with that market share, it’s not easy to get many more riders of competitor motorcycles to make the switch. The aim is to get two million new riders on board in just ten years, and what market research has shown is that there are an awful lot of people who want to get into the H-D brand, but don’t see anything that tempts them. They want something that’ll be easy to use in the city, but will handle well on the open roads too. 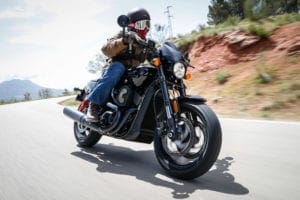 Logistically, it makes sense that the US Street range is assembled in the States, and all the others are assembled in Harley-Davidson’s India factory, which has the same processes, equipment and quality control. Parts for all of the machines are sourced globally, from the mirrors to the frame. If that’s a problem for you, then perhaps you’d prefer a machine with a Milwaukee-made motor.

Still here? Good – let’s move on from any unnecessary worries over who makes what, and look at how well this bike works. For a start, it’s not simply a dressed-up Street 750. The European-built ‘High Output’ 749cc Revolution X engine has high-flow heads with increased lift and duration from the single overhead cams, a freer-breathing air intake, dual-port 42mm Mikuni fuel injection bodies (the Street 750 has a single 38mm unit), and an optimised exhaust. 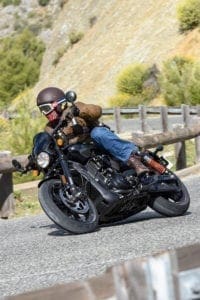 The chassis has a 27° rake (Street 750 is 32°), the tank – which is the same 13.1 litre unit – is moved further forward, and the swing-arm mounting point is different. The preload-adjustable shocks are new, as are the unadjustable upside-down forks, the cast wheels, which carry Michelin Scorcher tyres, the swing-arm, and the LED tail-light and indicators.

While you still need a key to operate the ignition, a fob arms the standard alarm and immobiliser as you walk away. The twin-piston calipers and 300mm discs (with ABS) are unchanged, but you’ll now find two up front. 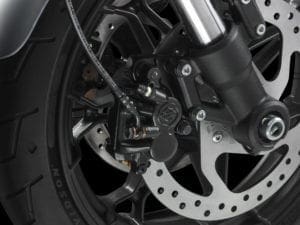 The styling appears a little confused to me, the wide, angular tail not quite gelling with the tear-drop tank. And that number plate carrier is a bit plasticky looking. But that’s a very personal opinion, and already I’ve seen riders cooing over the Street Rod. Plus, with Harley’s extensive parts catalogue, I doubt many of the machines will be looking standard for long…

The dash has a single dial with an analogue speedo and a small LCD that can display two trips, an odometer, clock or gear and revs, as well as a trip that starts when the fuel light illuminates. Fuel economy is claimed to be 65.7mpg (up from the Street 750’s 61.4mpg), which would give a potential range of up to 189 miles, though realistically – especially when taking advantage of the relatively high performance – I’d expect to be filling up every 100 miles or so, to be on the safe side. 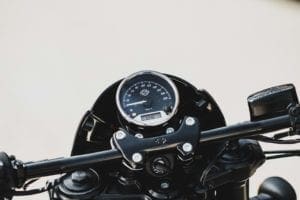 This was no ordinary Harley-Davidson launch – we were almost immediately on fast, twisty roads, and the Street Rod loved them. Overtakes took none of the planning often necessary on a big, lazy American Vee, and it changes direction pretty enthusiastically, with little work necessary.

The seating position feels quite tight at first – lean angles of 37.3° on the right and 40.2° on the left (it’s 28.5 on both sides of the Street 750) have been achieved by setting the pegs quite high, relative to the 765mm seat (which is 45mm higher than its sibling). I’m 5’10”, and my 44-year-old hips protested a couple of times when I climbed on. But the bars are well positioned and the seat comfortable, so besides those two instances of mild cramp, I found the 115mile test ride around Ronda in southern Spain to be very comfortable.

Having your feet beneath you means that, unlike on feet-forward Harleys, you can lift your bum off the seat for severe potholes and speed bumps. Yet I really didn’t find I needed to; the bike might dive a bit when snatching the brakes, but it’s otherwise firm enough to be ridden in a very spirited fashion – the unadjustable (bar rear preload) suspension really is surprisingly compliant and comfortable. 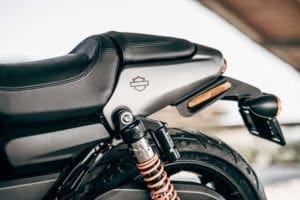 The turning circle is great – combined with the ease with which you can get your feet down, this is a confidence-inspiring bike for the city. It’s a shame then that the rear brake lever is too high, even when adjusted to its lowest point. Frank Savage, H-D’s manager of industrial design, told me that they’ll be looking at adding a bit more adjustment, though this could mean the lever might start to touch down at full lean.

The pegs fold up, but in typical H-D fashion, they don’t spring back. They’re also rather small, much of the space taken up by chunky linkage and hanger assemblies. In normal, fast riding, they don’t hit the Tarmac – it was only when we were taking photos that they started to scrape, but despite the exhaust’s heat shield also touching down, it always felt safe and under control. Not like the time I rode an Electra Glide in the Alps… 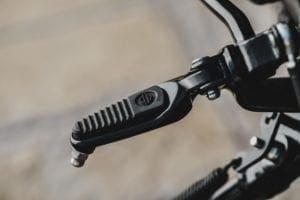 This bike really is a lot of fun to ride fast, but I wasn’t the only one to struggle to find neutral when the engine was running. One rider found that dialling the slack out of his clutch lever cured the problem, though it’s a shame that the clutch and brake levers aren’t span adjustable – when braking hard with two fingers, it can be too easy to trap the other two against the grip.

While it’s no tourer, the pillion seat would be comfortable enough for short journeys, with a reasonable amount of space, though with a couple of 13 stone journalists trying it out, the shocks – at their standard, relatively low preload position – were touching their bump stops. With the preload increased, and if you’re not looking to load it up with too much weight, this’d be a comfy enough option for a couple on a day trip.

It’s easy to forget your riding a Harley when hustling the Street Rod through corners. None of us expected it to handle this well. That’s not a criticism of the brand, just that it’s part of the character of the average ‘traditional’ American muscle machine. And I guess it has to be said that some of that character is lost in the Rod. This is the most Japanese-feeling Harley ever built.

The exhaust note is adequate. Here, sadly, Euro 4 regulations have strangled things, and it’s particularly noticeable when riding with a Forty Eight burbling beside you. At lower speeds, the pops and bangs that have been engineered into the overrun sound good, but as wind noise intrudes, all that can be heard is a high-pitched metallic clatter.

Harley-Davidson’s engineers should still be congratulated – those who want to be able to say “I ride a Harley”, but also need city-riding practicalities, more-than competent handling in the twisties, and an incredibly accessible price, should certainly arrange a test-ride.

If I had a Harley, it’d probably be an Iron 883 or a Roadster, but I’d still need to keep my KTM 1050 Adventure. The Street Rod could very easily be a rider’s only bike, and once they’re part of that club, it almost certainly won’t be their last Harley… 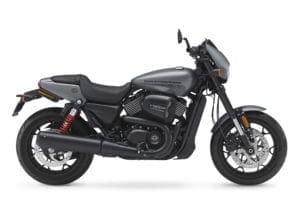 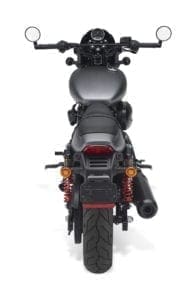