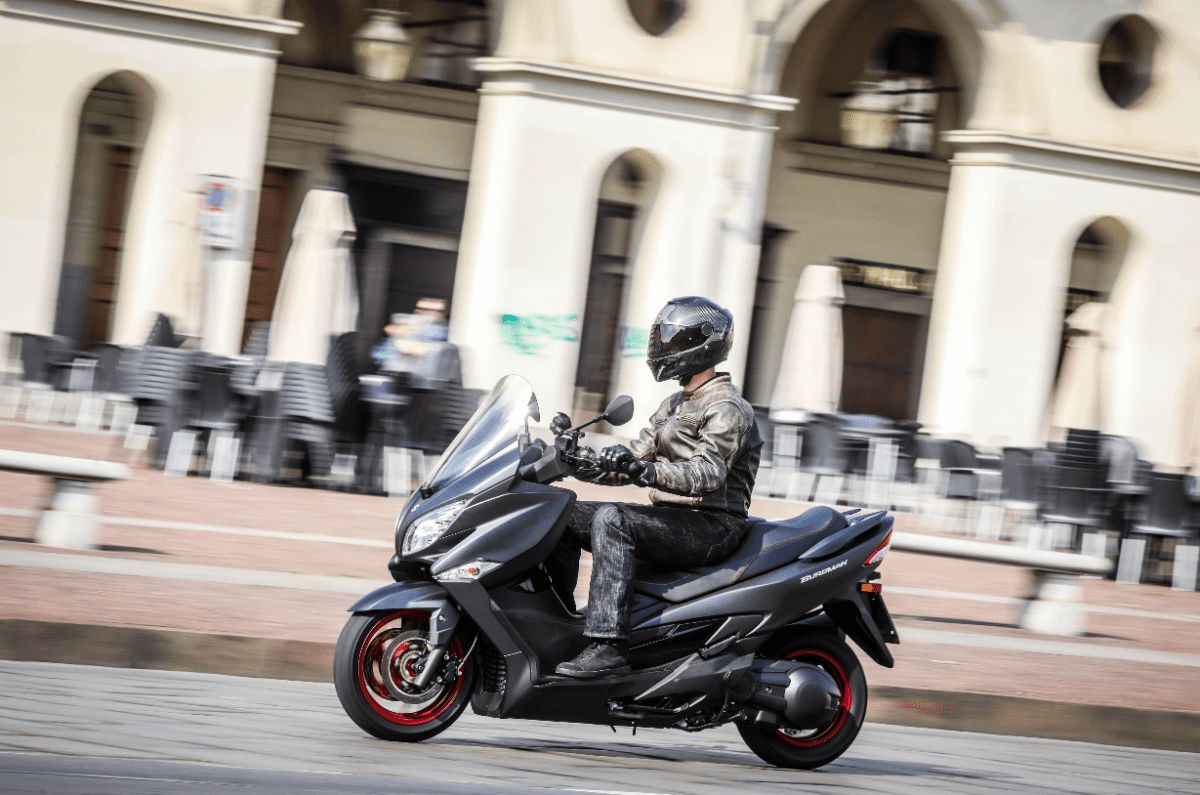 The Burgman series of scooters has always been a steady seller for Suzuki. If you combine the sales of the 125, 200, 400 and 650cc models, the Japanese manufacturer has shifted over 440,000 Burgmans (or is it Burgmen?) to date, with the Burgman 400 accounting for 170,000 of those. Now Suzuki is hoping to entice even more riders to join the Burgman party with the launch of the updated 400, the model that spearheaded the development of big sporty scooters back in 1998 and started the Burgman dynasty.

The new 2017 Burgman 400 is more evolution than revolution, with the same 399cc single-cylinder engine, although modified, still providing the power, while most of the chassis updates are designed to bring the middleweight scoot up to date rather than completely reimagining it.

Visually, the Burgman 400 has taken a big step forward, with the new look decidedly more slim and sharp. Suzuki’s design brief was to make a coupe rather than a sedan, and the updated scooter certainly seems more streamlined. New LED lights at the front and rear add to the modern look, and the candy red wheels on the matt black model (it also comes in white) look stunning. 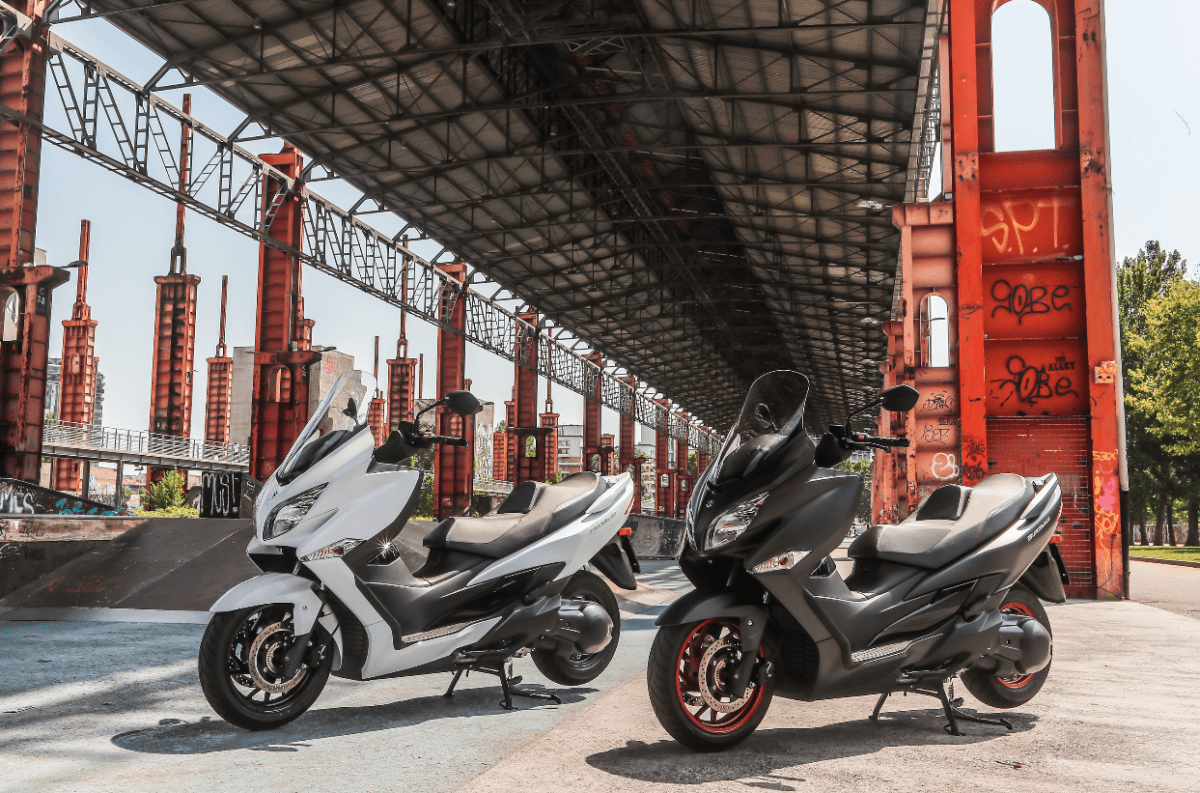 The European launch ride was in Turin, Italy, which provided the perfect setting for a scooter designed to take on both city streets and open roads. The 2017 Burgman 400 is seven kilos lighter than the last model, and as we set off from our hotel in Turin town centre and tackled the cobbled streets, you could tell it had lost some weight. The scooter felt light and agile – almost like a much smaller capacity model – yet substantial and stable.

Suzuki has also updated the link-type mono-shock rear suspension, which felt a tad sportier than I had expected. It made the ride a little less luxurious than on some other big scooters, but ensured that there was always a good level of feedback – particularly useful on the slippery and bumpy cobbled streets of Turin, with tramlines zigzagging everywhere. 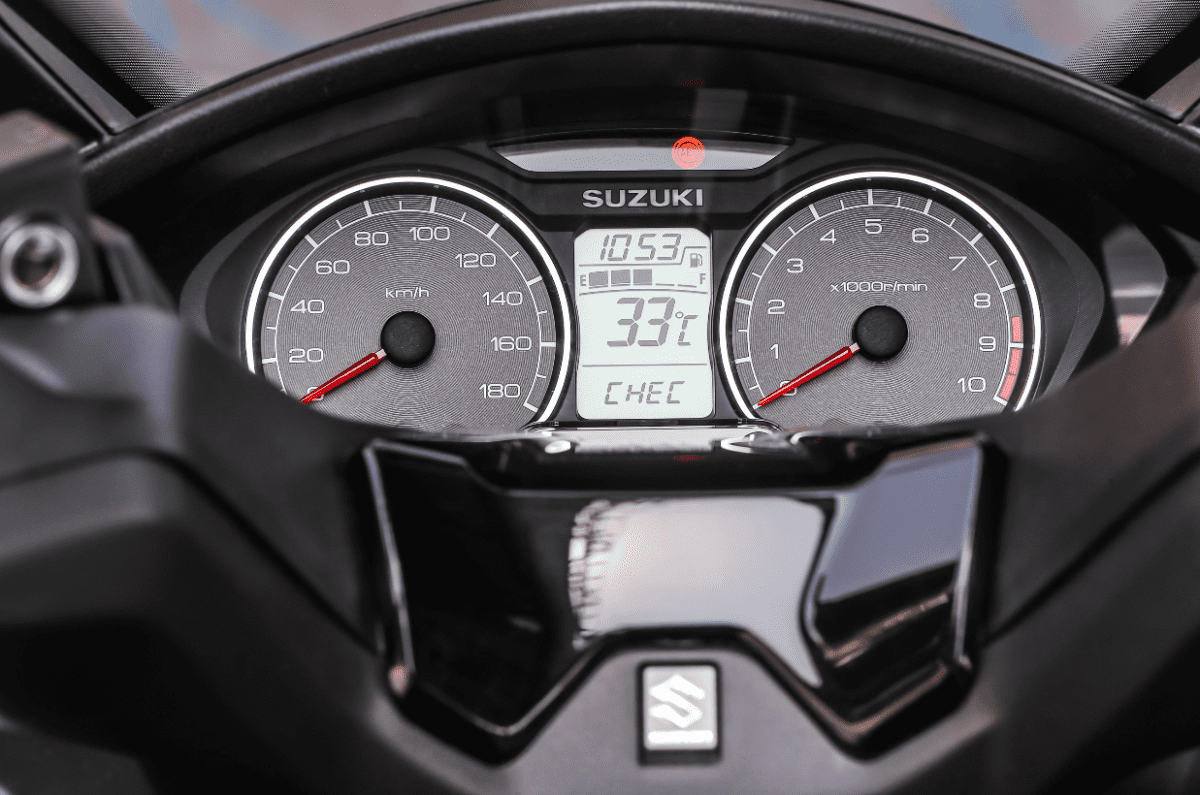 The engine has not been replaced for the new model, although it has been modified to give more low and midrange torque (now peaking at 26.55lb-ft at 4800rpm) and to pass the stringent Euro 4 emissions tests. The main changes to achieve this are a new 5-litre air intake box that replaces the old 4.2-litre box, and a new cam profile. This is a welcome development as it makes the scooter shoot off the line with plenty of enthusiasm. The downside is that maximum power is down 1bhp, with the top figure now 31bhp at 6300rpm – although in all honesty, I don’t think most of us could tell.

The way that the power is delivered is smooth, with the automatic CVT (continually variable transmission) taking the command from the twistgrip to the rear wheel in an effortless and silky smooth manner. In dry conditions you can happily pin the throttle from a standing start to leave the rest of the traffic behind you. In the wet you might have to be more cautious, as traction control is not included in the updates. 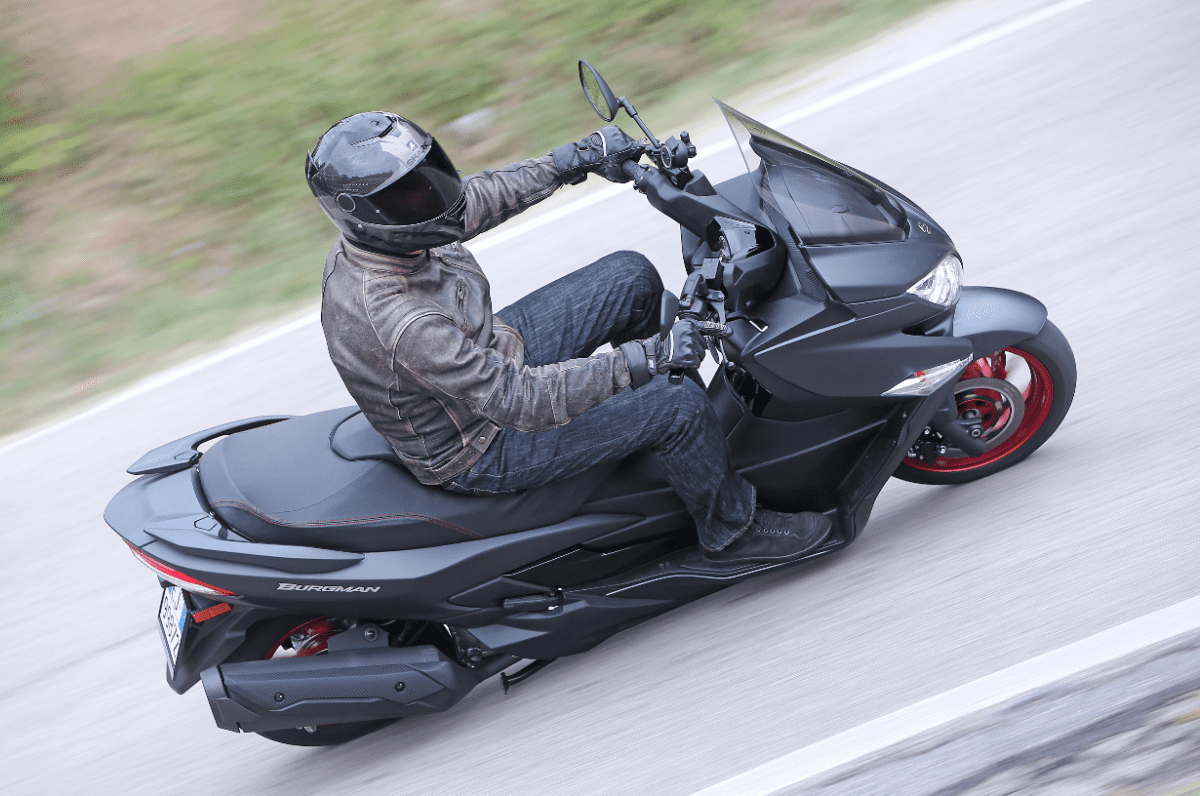 In town, the torque, power and handling of the new Burgman 400 had impressed, but the real test was always going to be out on the twisty roads in the countryside. Was it going to have enough oomph to be taken seriously as a weekend plaything as well as a commuter? The first signs were promising as we left Turin and started to weave our way up the hilly roads of the Piedmont region surrounding Turin.

The Burgman feels easy and light to steer and corners keenly, making the hairpin bends easy to negotiate. The centre stand starts to touch down when you get too excited with the pace, but no sooner than on other similar scooters. Because of the level of pull available and the reasonable kerb weight of 215kg, the scooter exits corners swiftly and gets up to speed in respectable fashion. Braking into corners is nice and controlled too, with the twin 260mm discs at the front benefiting from a little help from the rear 210mm disc when more urgent reduction of speed is needed. The new Nissin ABS unit is 750g lighter than the current model’s setup and it works well, keeping the wheels from locking even when you slam the brakes on. 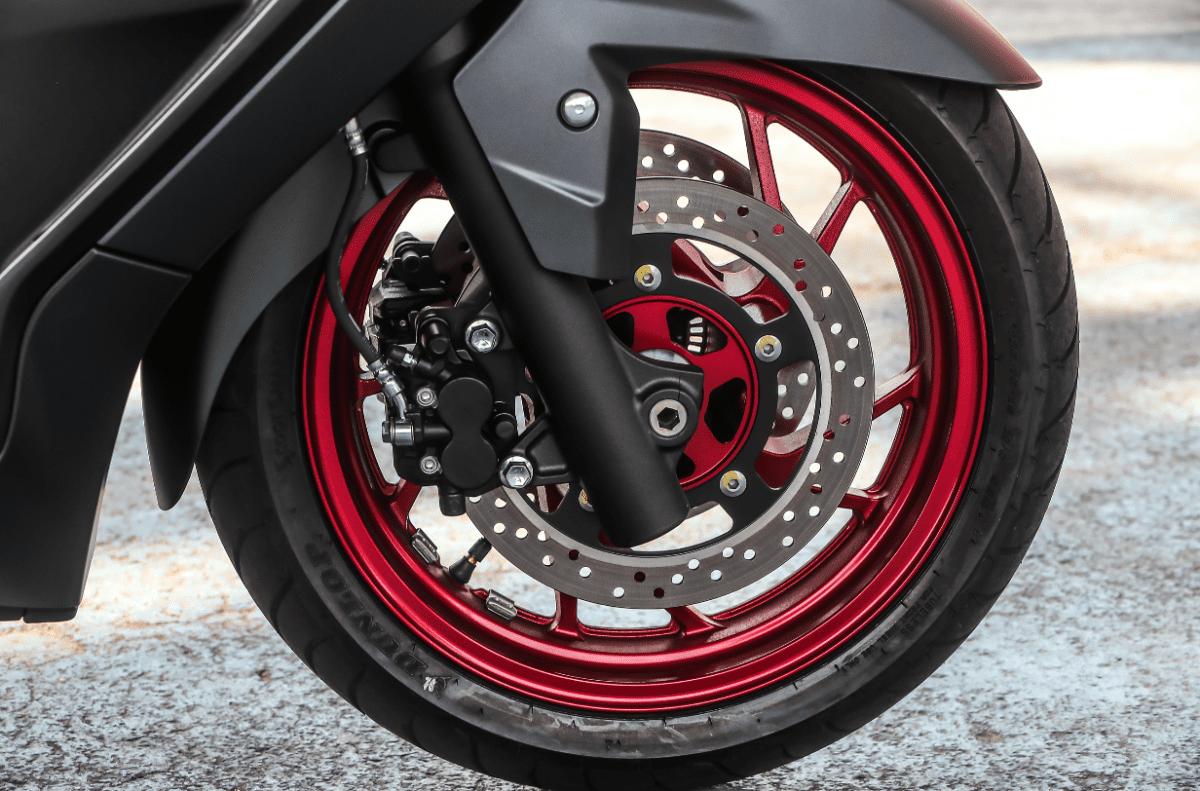 Our pace up the hill was, as our lead rider Stefano Gaspari later commented ‘very different from how most people would ride a scooter like this’, but the spirited riding revealed that the suspension that had occasionally felt a little on the hard side in town came into its own in fast cornering. It kept the Burgman steady and controlled, with no wallowing or vagueness restricting the ride.

As the roads straightened and the speeds increased, the limitations of the 400cc engine started to show. As capable and fun as it is to ride in town and winding country roads, at speeds above 70mph, acceleration started to feel a bit sluggish and overtakes required more time and planning. Still, the Burgman never felt unsteady, even when pushed to speeds it’s not really designed to maintain on a regular basis, thanks to the new more rigid frame and the larger 15in front wheel. 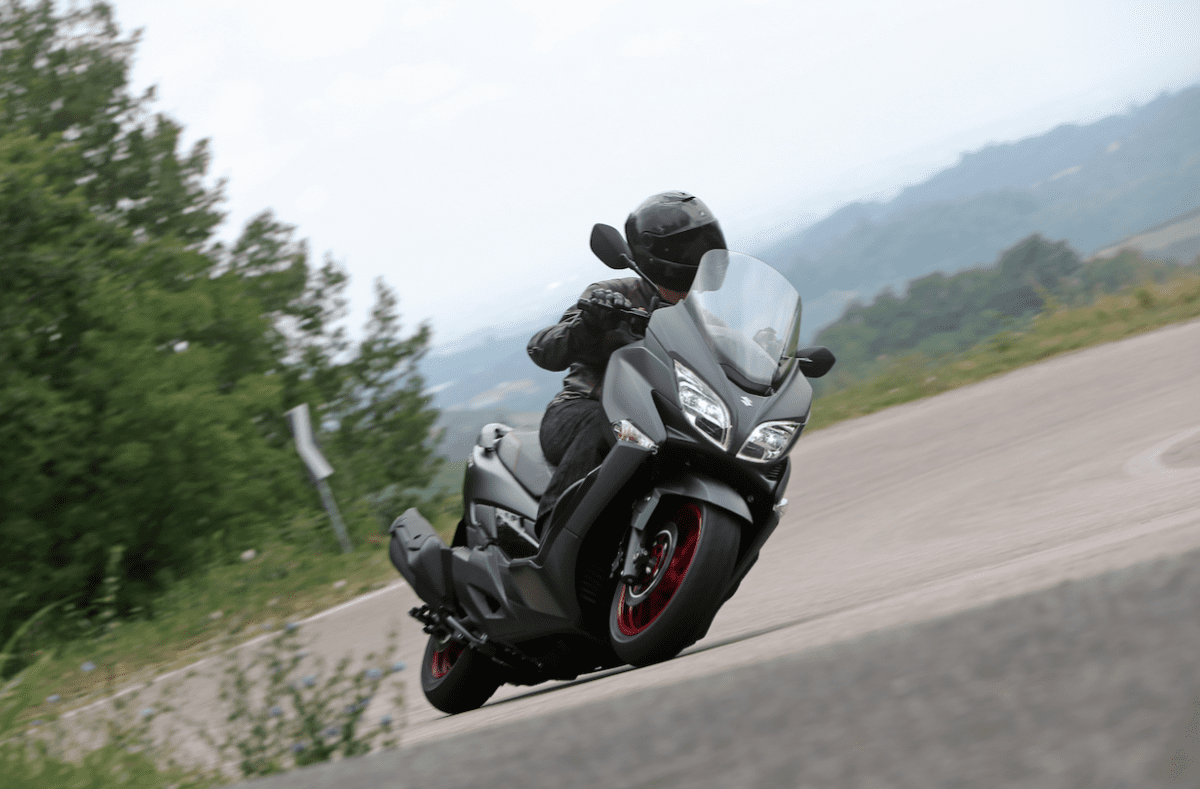 Both in town and country, the Burgman 400 felt comfortable and easy to ride. The new cut-away foot boards and the sculpted seat (which is now 20mm thicker for added comfort, yet lighter than before) make it easy to get your feet on the ground when you stop or crawl, while the ample foot space makes it easy to stretch out when you’re on the move.

The riding position has been slightly amended from the previous model, with a marginally sportier feel, but maintaining rider comfort. With the new windscreen that directs the windblast away from your body remarkably well, and the generous proportions of the scooter, I could easily spend hours on it without any aches or pains. The launch route was about 90 miles long, and at the end of the day I could have happily done the same again. The official mpg figure is 70.62, and although we only achieved 60.31mpg on our ride, I should think that a slightly more sedate pace would get you much closer to the claimed mpg and range of 210 miles from a brimmed 13.5-litre tankful. 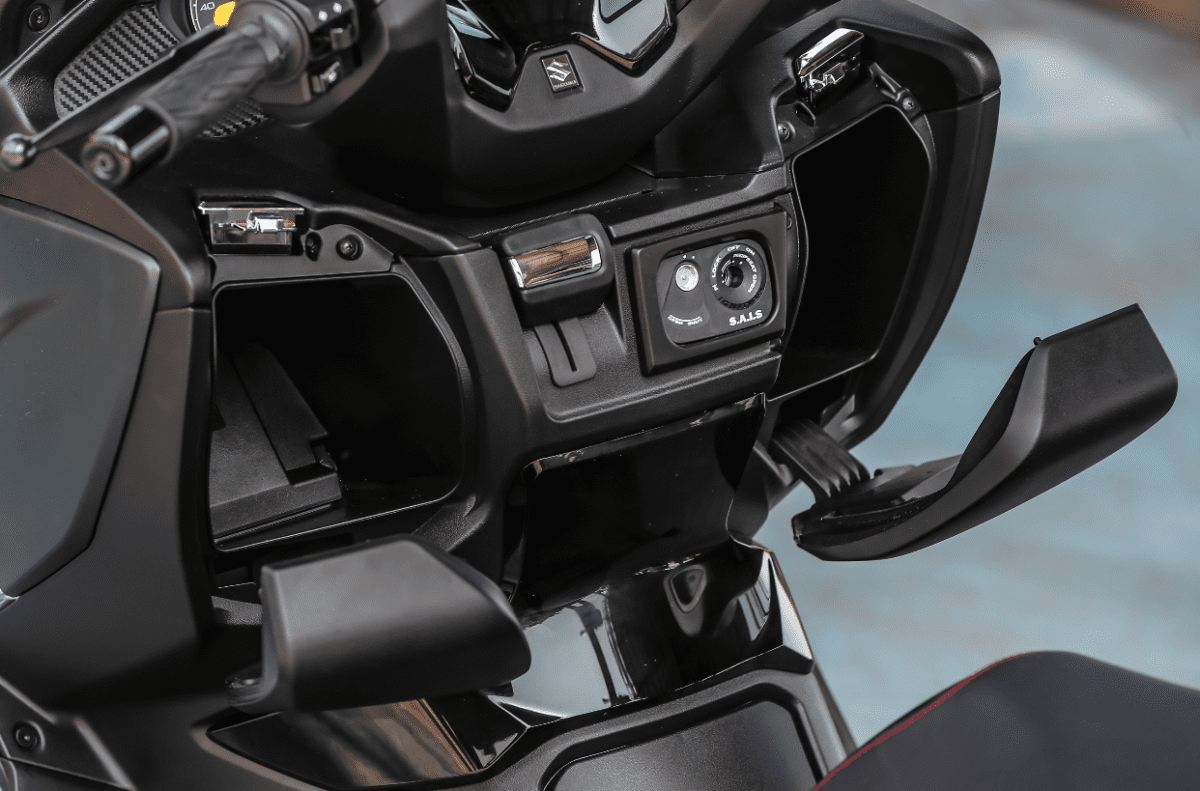 There’s a good amount of luggage space with a 42-litre underseat storage and two glove box-type compartments at the front (one with a 12V charger point). The front compartments aren’t lockable as Suzuki felt that even if they had been key operated, they would have been too easy to break into without spending top dollar in making them secure. They’re probably right – I wouldn’t leave my valuables in one of those lockable glove boxes.

Talking about security, the new Burgman 400 features a chain lock gate at the bottom of the bodywork, which allows you to pass a chain lock through it and secure your scooter to an immovable object. The ignition also helps to keep the Burgman secure, with the magnetic cover that can only be opened with the owner’s key. 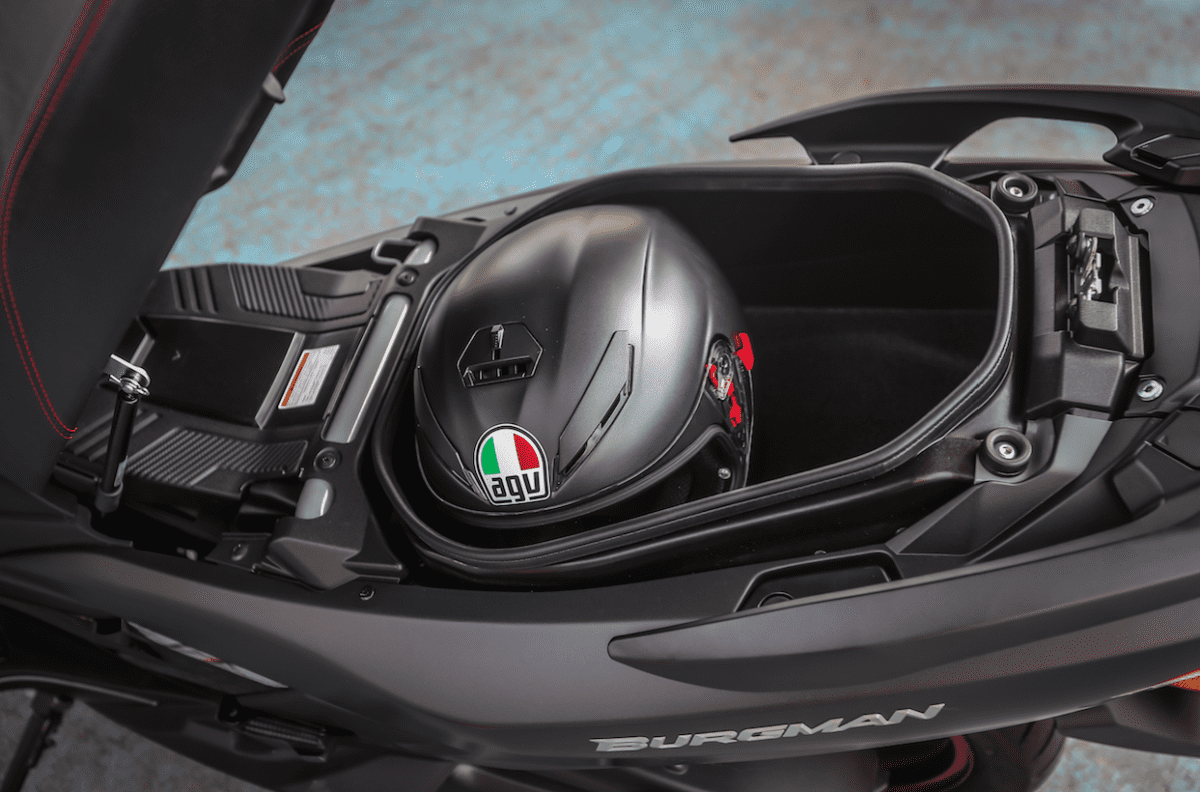 Arriving back in Turin after a day on the new Burgman 400, my overriding impression was that it was a thoroughly enjoyable scooter to ride. It has the level of performance, handling and style that make it a fun all-round package. The acceleration, brakes and suspension are all at high level, and combine to make this a good match for learners as well as more experienced riders. The only criticism that I have is the lack of traction control, but I suppose we have survived without it in the past. The Burgman 400 is 100% made in Japan, which shows that Suzuki is taking quality control seriously, and with the useful updates to the new model, we can expect the steady sales of the Burgman family to continue. 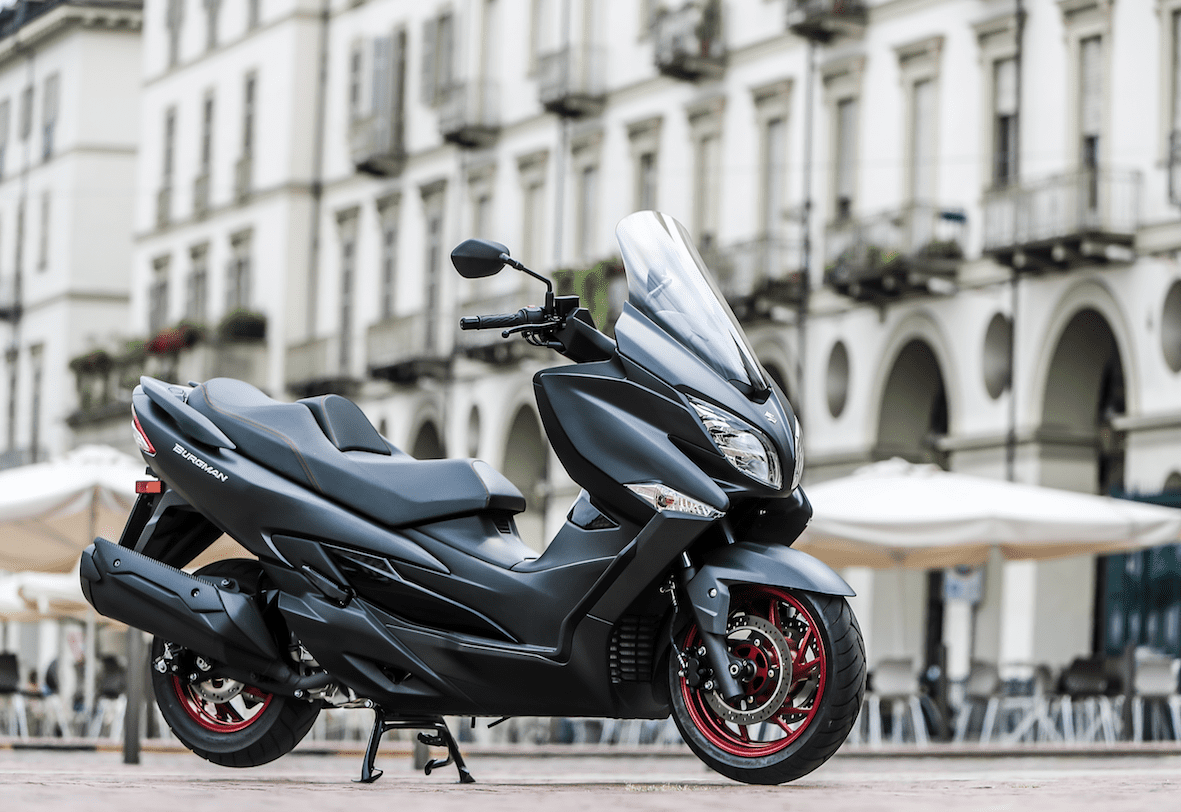 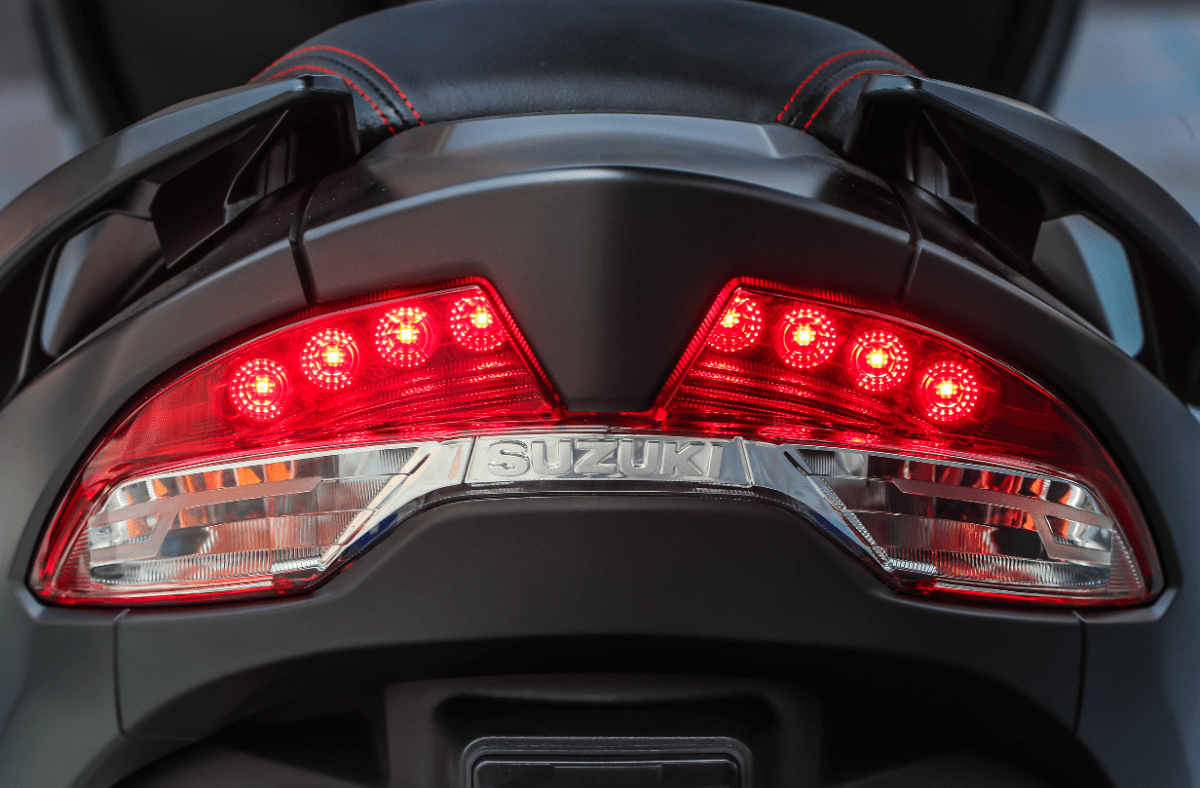