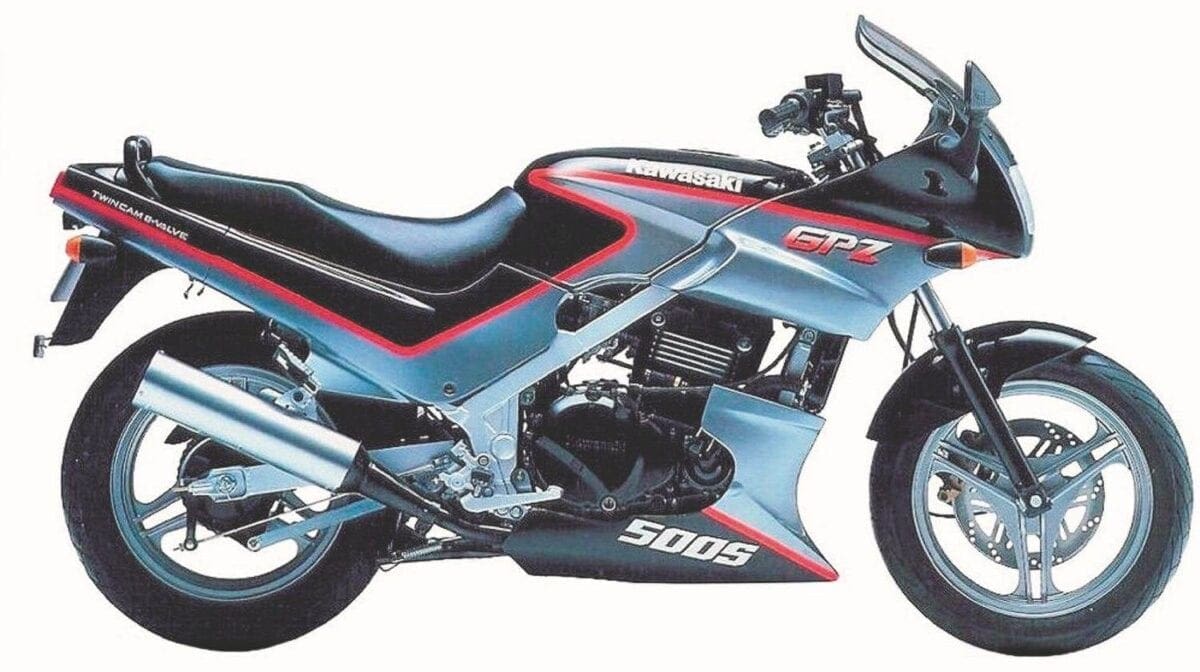 The first of the budget bikes, a good GPZ is a bargain today…

The GPz500S fell between bikes like Yamaha’s revvy two-stroke RD350 YPVS, and Kawasaki’s own – once class-leading – four cylinder four-stroke GPZ600R. The sporty looks were more than skin deep: with a minimalistic chassis it could turn a ride into something more exciting than on Suzuki’s GS500E, which would become its natural competition. We’re looking at the first model: the GPz500S A. This survived pretty much unchanged until 1994 when the D took over with its new clothes. The GPz500S quickly became a sales hit, offering affordable new biking at the time when the born-again-biker revolution was in full swing.

Engine: The twin-cylinder configuration allows for a compact design and reasonable power. Kawasaki took the water-cooled engine from their iffy-looking EN450LTD custom and pulled it about a bit, increasing the capacity slightly to nearer 500cc. They also lost the ridiculous belt drive set-up. The result was a new, but old engine. It’s not the most civilised lump you’ll ever use, but its mixture of mechanical noises rarely results in destruction. Max power was quoted at around 60bhp.

Handling: The 16 inch wheels limit tyre size, and with basic suspension the handling is never going to tempt people away from sportsbikes. This is actually where the GPz scores though, as it’s easy to ride, and forgiving when need be, so makes for a perfect first big bike.

Ride: For a smaller bike, the riding position is very comfy: the generous cut of the saddle is complimented by the sensibly placed, highish handlebars, that help to make this middleweight feel even more manageable. Again, perfect for those who’re just venturing out on their motorcycling careers. The weedy rear suspension isn’t really up to pillion work, though with something fresher from Hagon or the like, it could be easily improved.

Equipment: Budget bikes won’t ever bristle with equipment, but they can be user friendly. The clocks are clear and user friendly… even the mirrors work. The screen is quite low, but it’s OK for point-and-squirt riding, but if motorways feature daily you’d want to fit an aftermarket higher one. The single disc front brake is surprisingly good, while the drum rear is also more than up to the job of bringing the GPz500S to a stop. A centre stand is welcome, but sometimes removed when fitting after-market exhausts. Worthy of a mention is the choke: on many 80s Kawasaki’s it’s a tricky thing to master, as you need to juggle the choke lever and throttle from cold.

Finish: The fly in the GPz500S’s ointment is the finish: it’s terrible. Any example that’s lived outside and not had a sympathetic owner is best avoided. Original exhausts rotted years ago. Likewise suspension linkages and shocks will be in need of some love or replacing. The petrol tank is another area for concern, where rotted seams are common, and decent used tanks aren’t. Radiators are prone to corrosion, which obviously effects their ability to keep the water-cooled engine from over-heating.

Model history: The A model was launched in 1987, with 16 inch wheels and drum rear brake. In 1994 the D model appeared, with fresh bodywork, 17 inch wheels and rear disc brake being the obvious changes. The engine, frame and associated plumbing remained the same.

What to check: The engine is quite solid, though you should check for any abnormal rumblings from within. Generator flywheels are prone to breaking up, and finding a used one is rarely an option. Carbs can get faulty: the diaphragms can split which causes starting issues and poor running, but thankfully replacements are cheap. Check for corrosion: it attacks the poorly finished chassis and suspension. Brake calipers like to be serviced, and discs will quickly score if the caliper isn’t in tip-top condition. Standard shocks shouldn’t exist anymore, so if the bike doesn’t have a Hagon or similar fitted, negotiate the cost of a new one off the price.

Three overall pros: Cheap, economical and fun on a budget.

Value for money: A budget bike when new, a bargain basement bike now. Find a good one and you’ll be smiling, buy a nasty one and you’ll wish you hadn’t.

Servicing/maintenance: There’s nothing fancy to worry about here, just give it decent oil and filters when required. Always assume it hasn’t been serviced when buying used. Change the oil, filter, plugs and air filter from day one and then give it 12,000 miles or a year before doing it again.