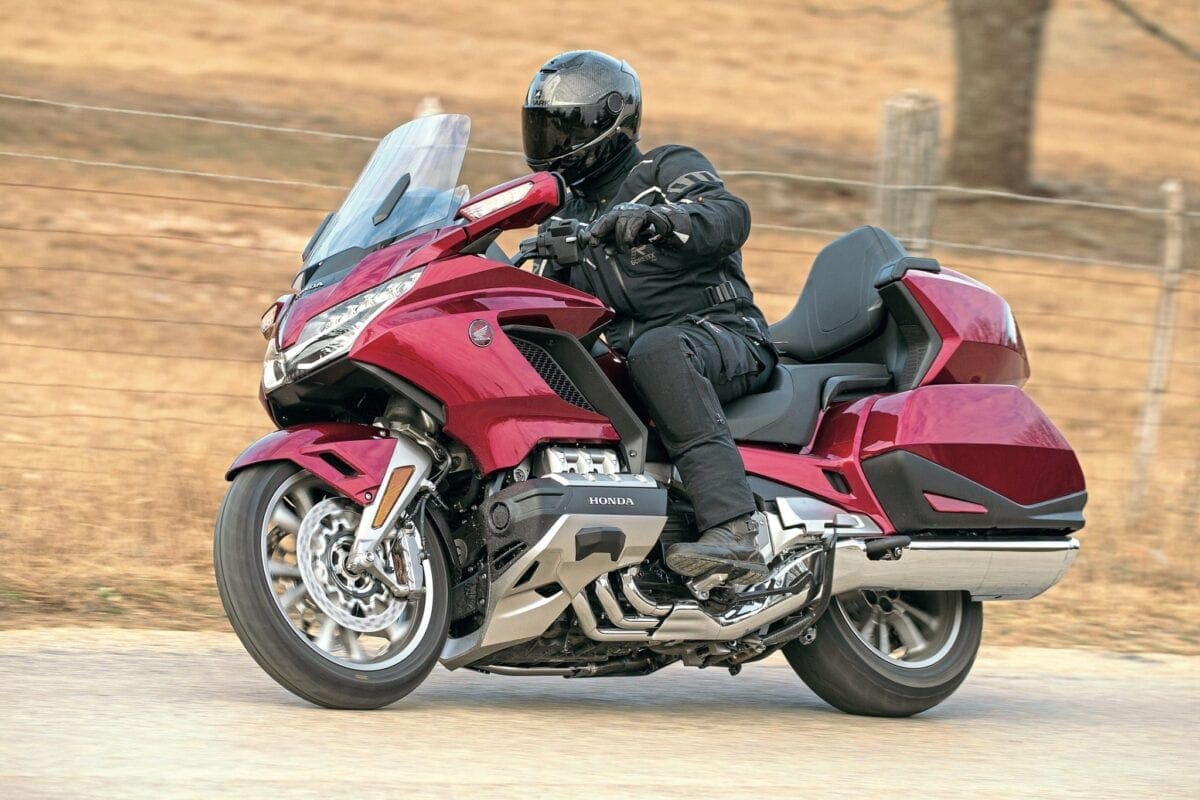 There’s a long line of shiny new 2018 Gold Wings parked outside our hotel in Austin, Texas. A beautiful sight, but there’s something wrong with the picture – I can see my own breath. Usually it’s around 20C around here, but a freak cold snap has forced temperatures into minus figures.

Because of the weather our departure is delayed and I have a chance to look at the Wing in more detail. It’s impossible not to recognize the new bike as a Gold Wing, but there’s an instantly obvious difference from the previous generations. The 2018 model bears all the family traits with the spacious seating arrangement, big built-in luggage, and the sheer size – but it looks like it has just returned from a motorcycle equivalent of a boot camp, appearing sharper, leaner and more athletic than its predecessors. And that’s no coincidence. Honda wanted to keep all that was good in the old model: the luxurious level of equipment, the torque-rich power delivery from the six-cylinder engine, and the feeling that there’s no trip too long for the bike. But all that needed to be re-packaged in such a way that it would work on shorter journeys too and appeal to a broader audience beyond the mega-mile tourers – not a simple task when you start with a 421kg tanker of a bike.

I can appreciate the work gone into shrinking the Wing as soon as I set off. I’m on a DCT (Dual Clutch Transmission) automatic version, so slow riding is easy with no clutch to worry about. From the start the new model feels better balanced and more stable at slow speeds – that diet has clearly worked with the manual Gold Wing Tour weighing 379kg wet, and the DCT and airbag model tipping the scales at 383kg wet. 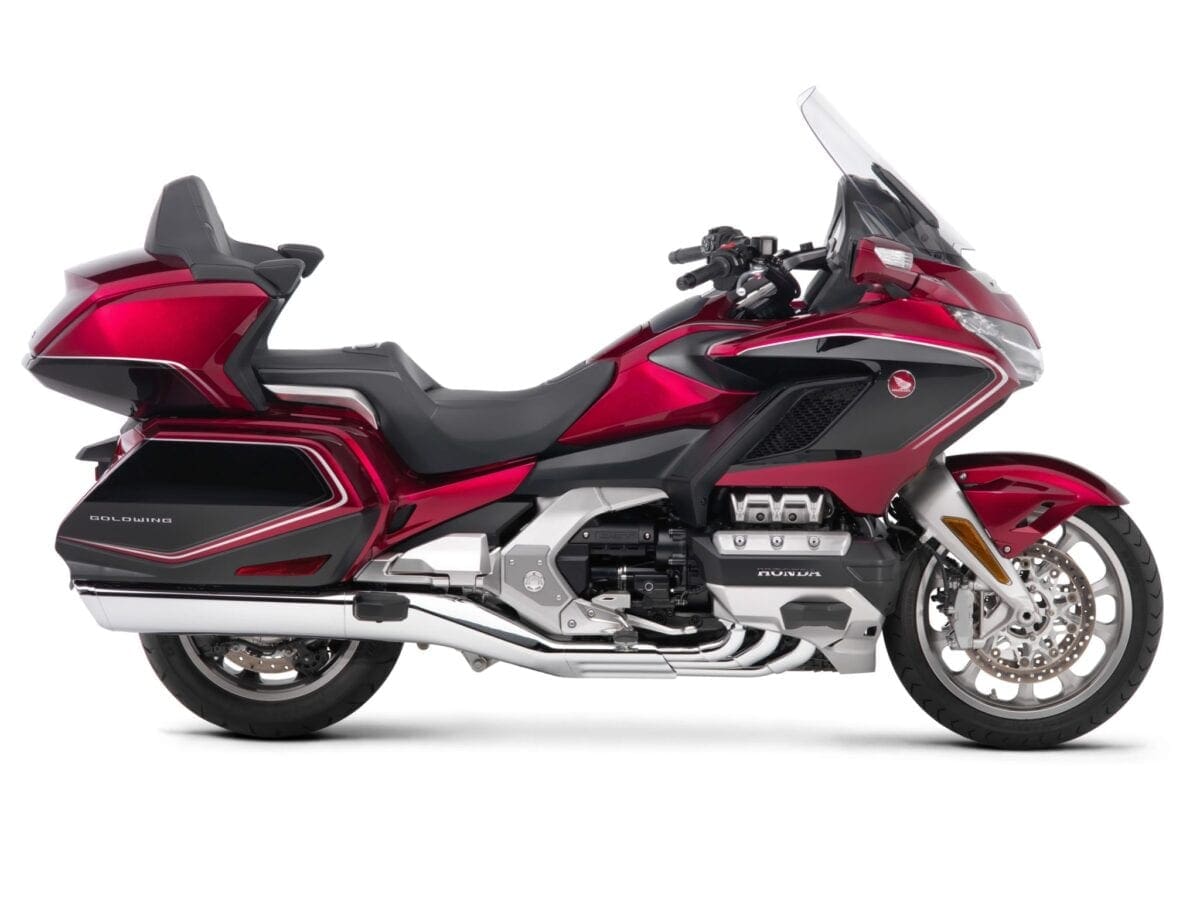 As we hit the road, the first thing I notice is how much better the new third generation seven-speed DCT system is compared to the previous one. It links up with the ride modes (Sport, Tour, Economy and Rain) that the new ride by wire throttle has made possible, and works its way up and down the gears in an almost seamless fashion.

The difference between the DCT settings for each ride mode is now more pronounced than before and you can feel a real urgency in the engine performance once you dial the Sport mode in.

In addition to power delivery and DCT settings, the ride modes also control the electric suspension, traction control and ABS settings. I can’t say that I noticed much of a difference in the suspension performance between the ride modes. I know that rebound and compression damping settings in the forks change between the modes, but with the roads in fairly good condition, the differences were academic. Regardless of the settings the new double wishbone front suspension (it’s a bit like the BMW setup, but developed by Honda in-house) seemed to provide a smooth and vibe-free ride. Honda says that it makes the front 30% more stable, and it certainly feels better than the old model’s suspension. 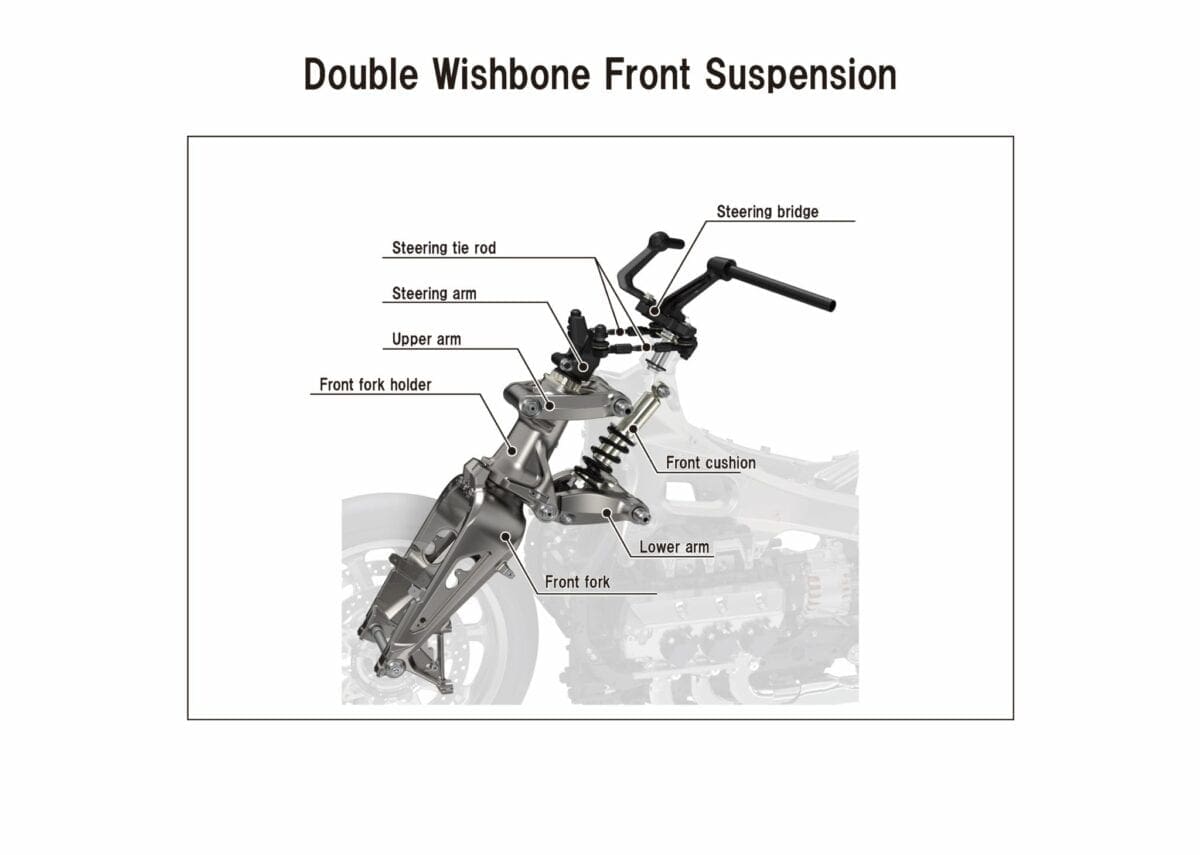 The double wishbone system is also one of the reasons behind the new bike being more compact. It allows the front wheel to move up and down more vertically than before, enabling the Honda engineers to design the new die-cast aluminium twin beam frame around it and push the more compact engine 40mm forward and the riding position 36mm forward.

Rear spring preload is also electrically adjusted, but the settings are separate from the riding modes. Instead there are four options for preload depending on your load: single rider; rider with luggage; rider with pillion, and rider with pillion and luggage.

Rider comfort is a big thing for the Gold Wing, and although the new bike is more compact, there’s still plenty of space for both the rider and pillion. The bars are a little further forward while the pegs have moved in the opposite direction, but the riding position is still relaxed. 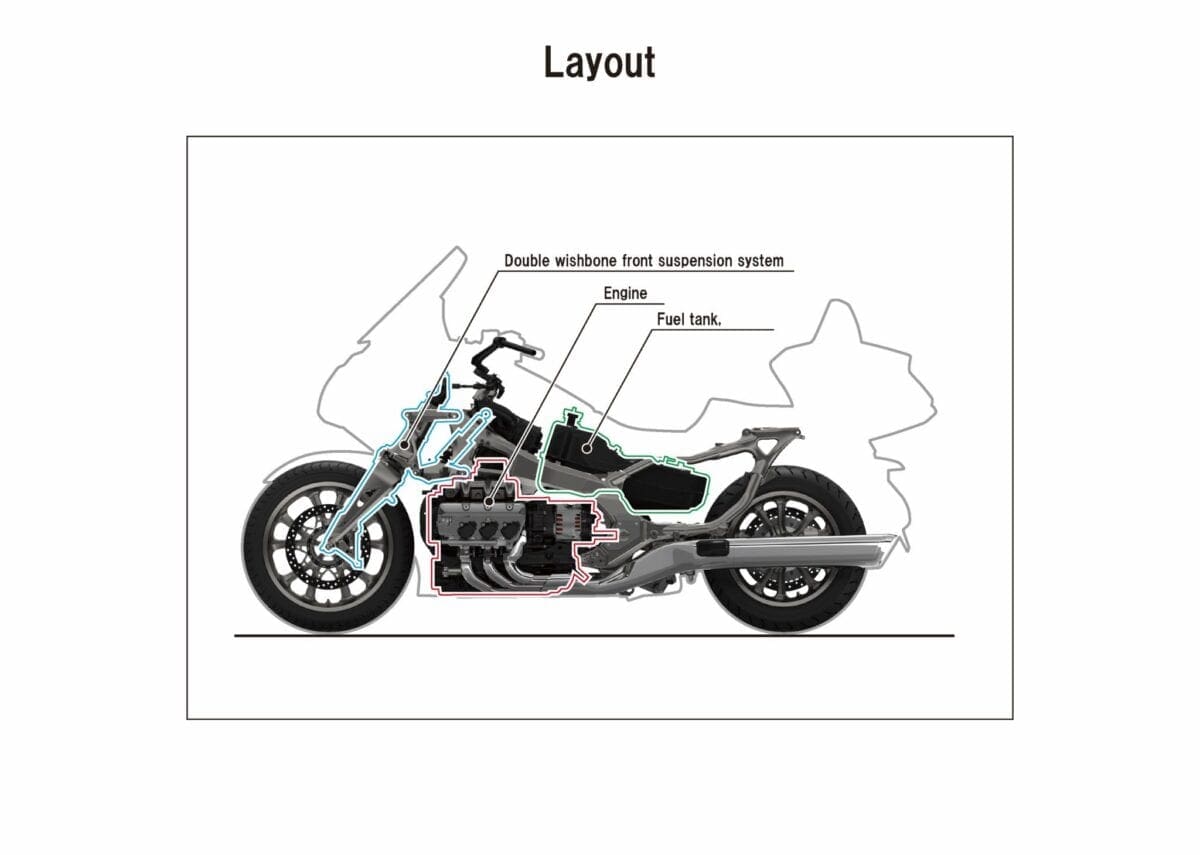 A big step forward is the new instrumentation and switchgear. Nestled between an analogue speedo and tachometer, the 7-inch full-colour TFT display screen provides audio, navigation, phone (if connected through the USB port in the glove box or via Apple Car Play), and bike settings info. While the screen on the old model often reflected sunlight, the new one was clear to read in all lighting conditions.

Switches have been moved from the side panels to the central console and the bars, making everything easy to see at a glance and to operate without reaching too far. The only problem I had with the left hand switchgear was that the combination of a lot of buttons and thick winter gloves made me hit the wrong buttons on a few occasions. I’m sure that more time on the bike would help with that though. 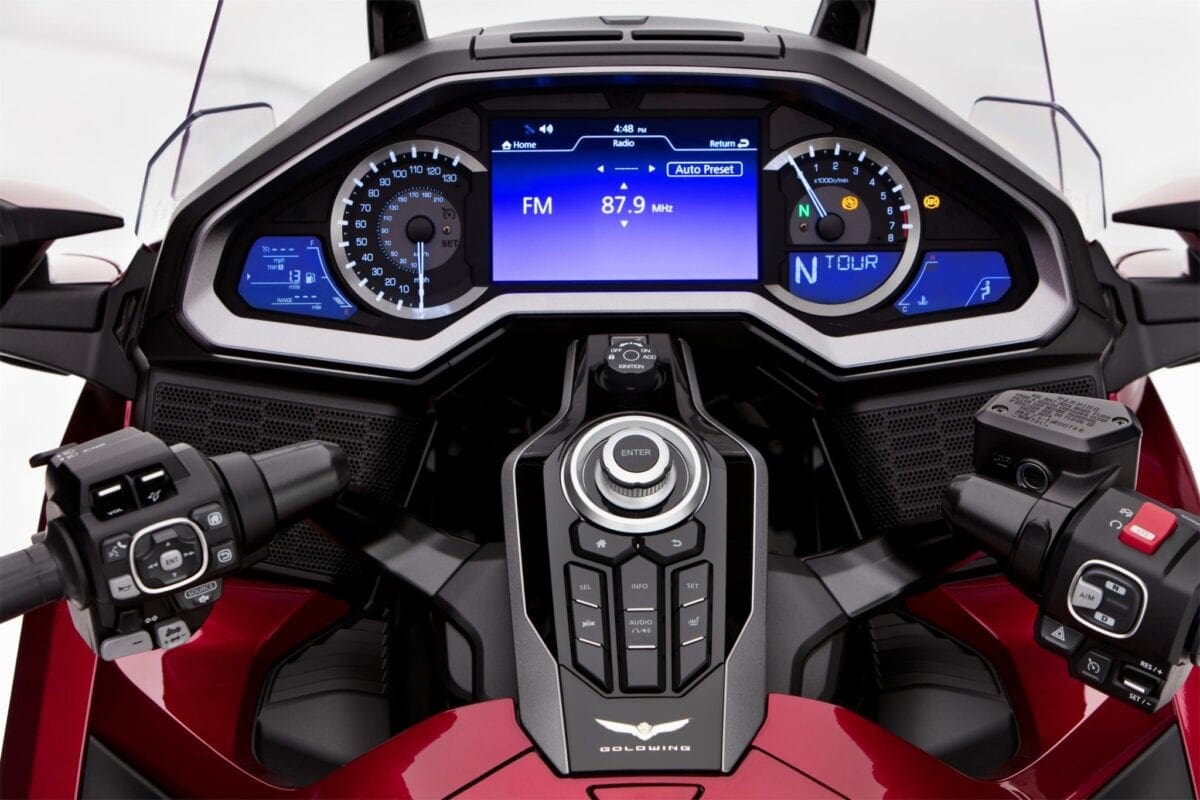 The speakers on the bike are excellent. Honda says that they have been strategically placed to suit the new riding position, and they certainly worked well. I could hear the bike radio and music from my iPhone perfectly clearly at 70mph – and so could everyone else within a five-mile radius, I guess.

With the Wing getting smaller and lighter, two victims of downsizing were the fuel tank and luggage space. The former has shrunk by four litres and now totals 21 litres, but Honda claims that the tank range has remained similar to the old model thanks to the lighter weight, improved aerodynamics and better fuel economy, now claimed to be 50mpg. On our ride the average mpg was in low forties, but then again, we were testing the bikes and accelerating and braking a lot more than you normally would. The luggage space has been reduced by about 20%, now down to 110 litres of total storage capacity. There is still space for two full-face lids in the top box of the ‘Tour’ model. 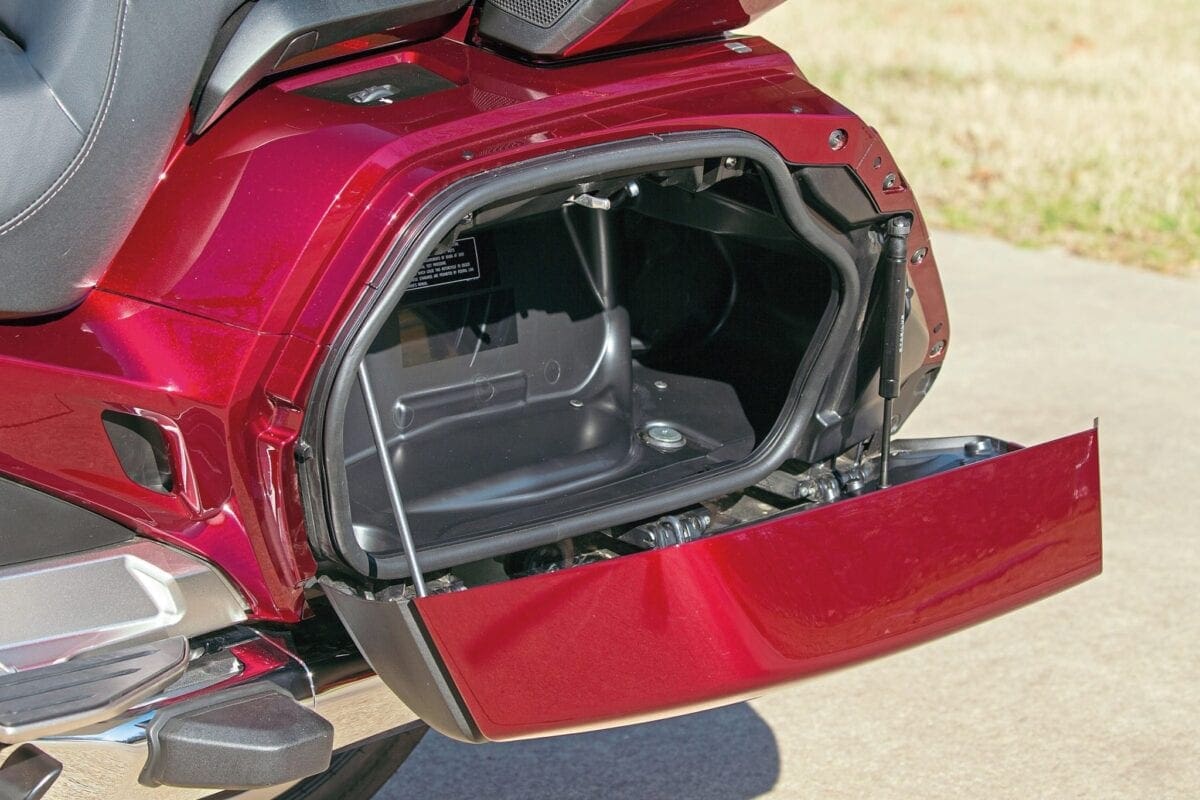 Compared to the 2017 model, the new engine feels a lot more lively. That’s partly because of the reduced weight of the bike, partly because of the changes made to the six-cylinder Goliath of an engine. The 1833cc displacement hasn’t changed, but the engine has been completely revised. The horizontally-opposed flat six now features a lighter, more compact valve train and four valves per cylinder. The engine is 29mm shorter and 6.2kg lighter, partly because of the new Integrated Starter Generator, which combines the starter engine and generator functions and reduces weight by 2.4kg. Peak power of 125bhp arrives at 5500rpm, with peak torque of 125lb-ft delivered at 4500rpm.

During our Texan road trip, I had a chance to ride the manual version as well as the DCT. There are now six gears in the box compared to the old model’s five, so engine speed is a little lower when cruising in the top gear. The manual setup was perfectly good, but because the new DCT system is so much better than before I preferred it to the manual box. It just makes life much easier, especially on a big bike like this. 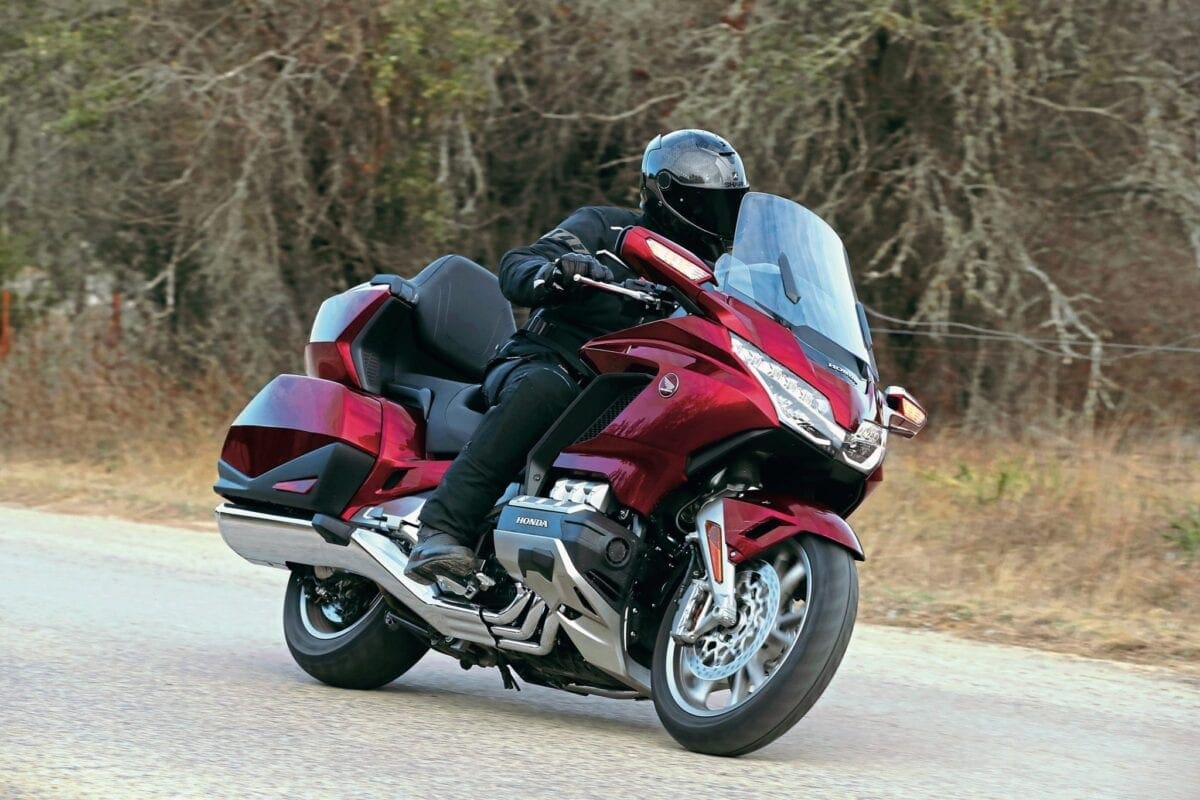 After a few hours on the bike, cruising past roadside gun shops, vast plains, endless lines of pickup trucks and scrap yards the size of a small town, I was still perfectly comfortable on the Wing. And since the temperatures were still only around 5C according to the thermometer on the dash, I was happy that the seat and grips were heated. Another pleasant surprise was the electrically adjustable screen. When it was fully up I felt next to no buffeting and the wind noise died right down.

The brakes feature ABS and the Dual Combined Brake System (D-CBS), which distributes braking force between the front and rear wheels. Both systems worked well and the feel from the brakes was nicely progressive. At the front, dual 320mm discs are gripped by six-piston radially-mounted calipers, and at the rear a three-piston caliper bites into a 316mm disc. 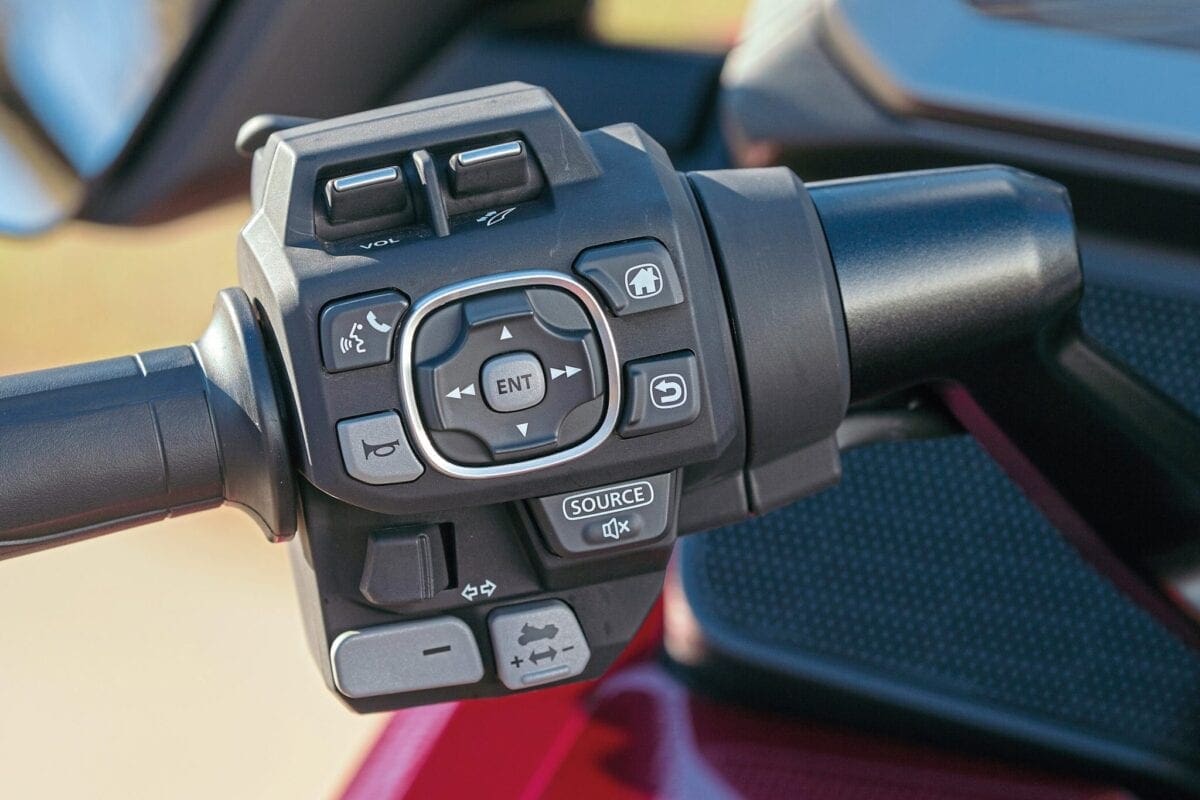 While there might be some sharp intakes of breath at the price of the 2018 Gold Wing (£26,679 for the ‘Tour’ manual and £29,699 in the ‘Tour DCT & Airbag’ spec, which are the only ones sold in the UK), there’s surely no grumbling about its more manageable size, better handling, livelier engine and the sheer array of tech. Granted, the old bike was in need of an update, but even if you don’t compare the two the new bike is still impressive in its own right. And what really appealed to me, more than on any other Honda so far, was the new DCT autobox – it suits the bike’s character, makes life easy and works incredibly well. I could happily spend many more days in the saddle of the new Gold Wing – and not just on these big Texan roads, I’d happily anywhere. But first I need to scrape the ice off my riding gear. 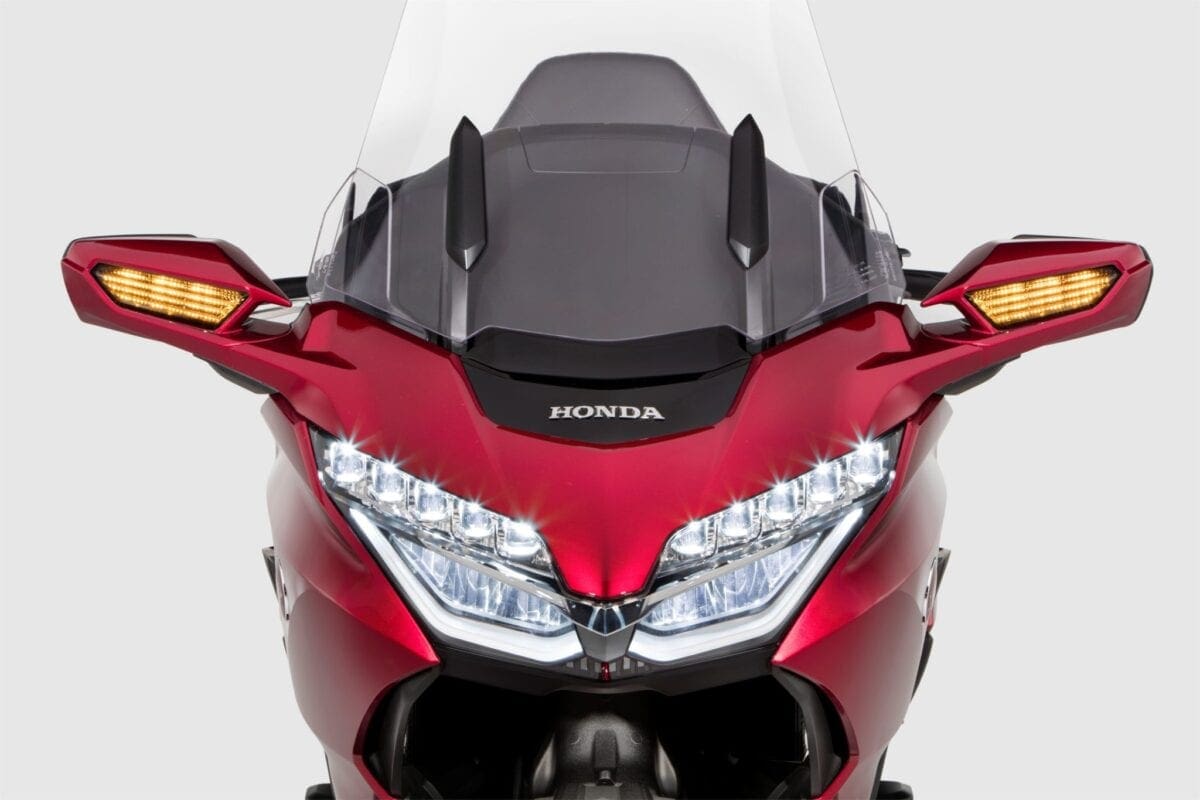