MoreBikes was out in Austria for the launch of Yamaha’s hotly anticipated leaning multi-wheeler, the Niken. Espoused as a corner carving king, we’ve been putting it through its paces on some tight and twisty mountain roads, to see just how well the revolutionary bit of kit handles.

Meaning ‘Two Swords’ in Japanese, the word Niken originates from 17th century Japan when the two-sword style of swordsmanship was first invented. It proved revolutionary, and marked the beginning of a new era in combat. Could Yamaha’s new Niken revolutionise motorcycling in the same way? 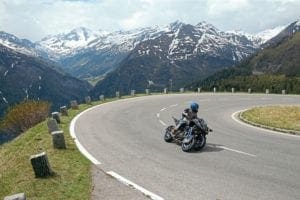 WHO CAN RIDE IT?

Unlike other three-wheelers – the high-performance Yamaha Niken can only be ridden on a full motorcycle licence.

WHO’S IT AIMED AT?

Interestingly, Yamaha hasn’t really done any specific market research on who’s going to buy the Niken – but, there are three main groups that they reckon could be tempted. There are the innovators, who are always looking to get their hands on the latest tech. Then there are the expert riders, who are looking for a tool to help them get the most out of riding. And finally, there’s function oriented riders, who are looking for extra confidence and stability.

WHAT’S IT GOING TO COST?

It’s not going to cost as much as you might think – setting you back £13,499. Yamaha has been purposefully aggressive with its pricing strategy to try and convert as many motorcyclists as possible.

Since Yamaha Motor was founded back in 1955, the Iwata-based company has been responsible for developing some of the most ground breaking and influential motorcycles and scooters on the market. Back in 2015 – Yamaha displayed its MWT-9 three-wheel concept motorcycle at the Tokyo Motor Show. And just two years later, Yamaha has unveiled its all-new Niken, the world’s first multi wheel production motorcycle.

It’s one of the biggest innovations to motorcycling in the last decade (maybe even two), pushing the boundaries of what’s possible with its revolutionary Leaning Multi Wheel (LMW) technology and two front wheels – helping to inspiring corner-carving confidence, no matter the grip on offer. And to put it through its paces, MSL has been out to Austria – riding 260km of mixed mountain roads, including some tight switchbacks, fast sweepers, and niggly, single track mountain passes.

After spending the day scraping its pegs while carving up some beautiful mountain roads, I’ve got nothing but admiration for Yamaha’s leaning multi-wheel machine. It’s confidence-inspiring, capable and great, great fun. 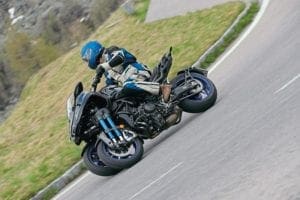 Admittedly, the Niken is quite difficult to define. It’s not a bike, because it comes with three wheels not two. But it leans over – so it’s not a trike either. Basically, it’s like nothing else on the road. From the front, with its muscular bodywork and aggressive LED light pattern – it looks mean. But climbing aboard for the first time, it doesn’t feel as strange as it looks. It almost feels like a big scooter, or super-stable tourer.

It’s comfortable too – and after something like six hours in the saddle, I still felt fresh – and ready for more. The seat isn’t exactly low, at 820mm – but standing at 6ft 1” with 32” legs, I didn’t find it an issue at all, and I could get my feet planted flat on the floor no trouble. It weighs in at a fairly hefty 263kg, but it’s so well balanced, that you barely have to think about it. I could paddle it around car parks with ease. Interestingly, the seating position and bars have been shuffled back too, to ensure 50/50 weight distribution. 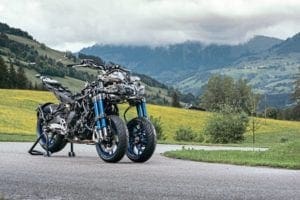 First off, we’ve got to talk about the Niken’s revolutionary new LMW (leaning multi-wheeler) technology and two front wheels. They help it stick to the road like nothing else I’ve ever ridden – and across our 260km test route the levels of grip on offer from the front end never failed to impress. Even when the rain came (and boy, did it come), I still had plenty of confidence that the front wasn’t going to let you down.

The front end suspension, which works in unison with the LMW system, is equally impressive. It’s reasonably soft in standard setting – but thanks to its twin-fork system – and two front wheels, the Niken can track smoothly over rough terrain with ease. It’s like it’s on a set of train tracks. I was bobbing around into ruts and over rocks and gravel, trying my best to catch it out – but it wasn’t fussed, and handled it all in its stride. Rear suspension is a fairly standard mono-shock as on the MT-09, with adjustable pre-load and damping, and it works well too – soaking up the bumps with no qualms.

The brakes are decent, allowing you to stop quickly and safely – though they do have to work pretty hard to pull its hefty weight to a standstill. Impressively, thanks to its two front wheels, and clever LMW system, you can actually brake right the way through corners – and it’ll hold its line (although Yamaha did suggest that you shouldn’t use it all the time, only when you really need – as it’ll overheat the ABS module).

Its engine is a peach too – pulled from the MT-09 and Tracer 900, but tweaked with a few harder wearing internals to allow it to pull the Niken’s weight. Impressively, it actually manages to return near MT-09 levels of performance, kicking out 84.6 kW at 10,000 rpm and 87.5 Nm of torque at 8,500 rpm. 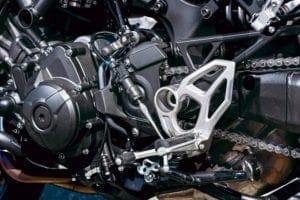 For rubber, Yamaha has teamed up with Bridgestone to ensure the grip on offer from the tyres, matches up the Niken’s capabilities. At the front, there’s a pair of specially developed 15 inch 120 section tyres, which offer unprecedented sticking power. Interestingly, the rear is fitted with a Bridgestone A41 ‘Adventure’ tyre, which offers less grip than at the front. Although not an obvious choice, it lets you break traction fairly easily, and kick the back end out with a blip of the throttle – which as you can imagine, was great fun.

Another nice touch is its lightweight aluminium 18 litre fuel tank, which employs the same advanced production technology as the YZF-R1 and YZF-R6. Impressively, it offers a (claimed) range in excess of 300km. From a technology perspective, it’s well kitted out too. There’s an easy to read LCD-display, LED lights front and rear – and a range of tech to make riding it even easier, in the form of YCC-T, D-MODE, Cruise Control and a Traction Control System, as well as an A&S clutch and Quick Shift System. 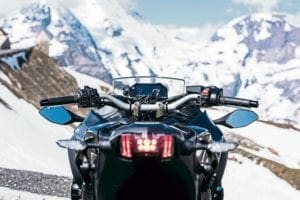 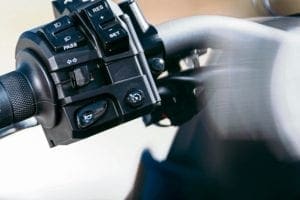 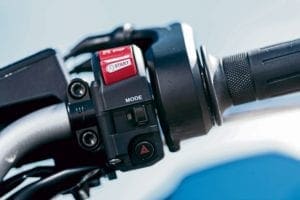 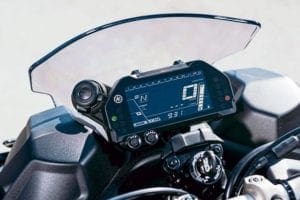 Honestly, I’m by no means the fastest or most capable of riders. I’ve had my full licence for just over a couple of years – but there’s no doubt that I could push it harder than I would a normal bike on roads I didn’t know.  And the harder you push it, the more rewarding it is. You can go from peg to peg, with little effort – and remain confident it’ll hold its position.

In short, it’s obvious a huge amount of brain power, care and effort has gone into perfecting the Niken – and after spending a day in the saddle, I can say with certainty that it’s all been worth it. In fact, I’ve never heard a group of journalists agree so wholeheartedly on something – which is surely a testament to just how good the Niken is. You need to ride one. It’ll surprise you. I know it surprised me.