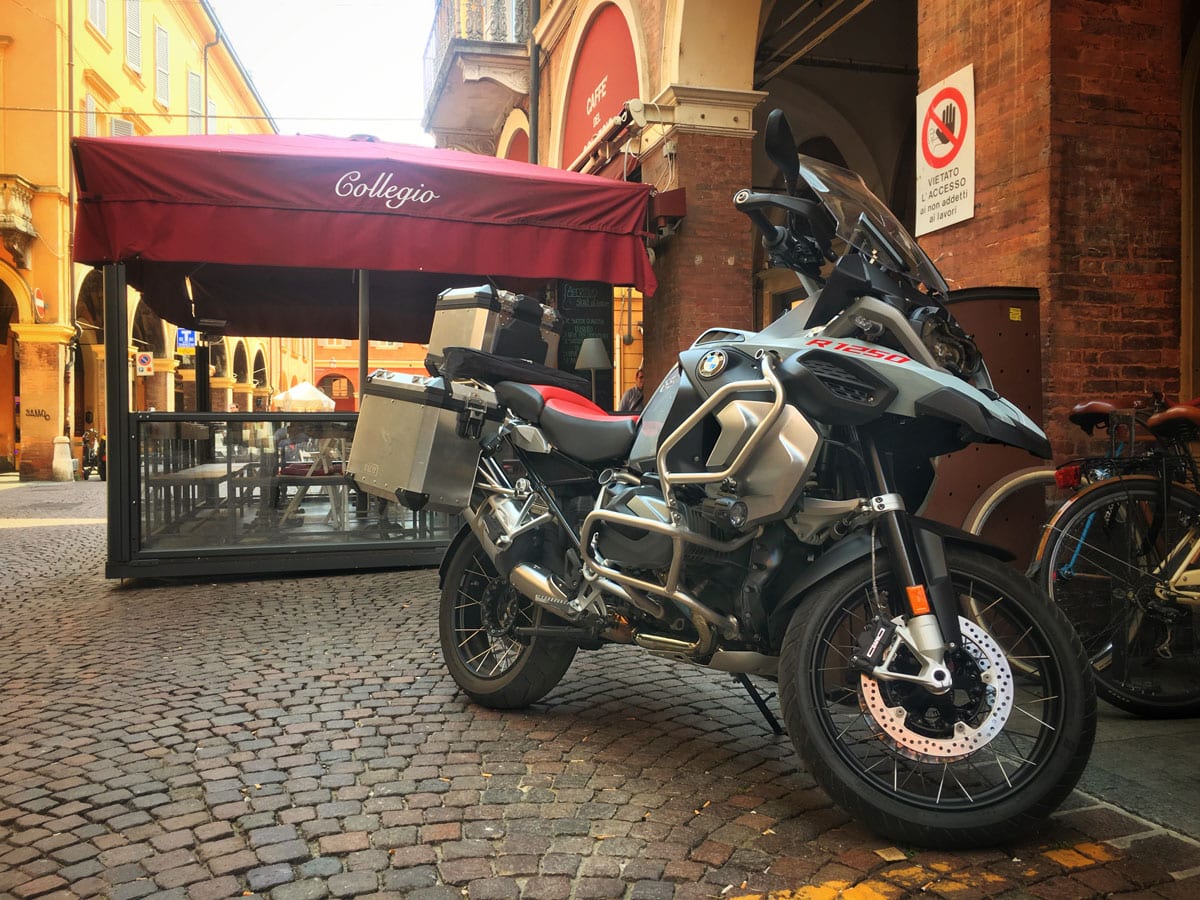 *DISCLAIMER: This was written before COVID-19.

Mikko took the BMW on a Euro-trip to see how it really handles big miles, big mountains, and big heat.

For as long as I can remember, I have seen the big GSA as the ultimate touring bike. Forget the press shots of the bikes going sideways in the dirt – for 99% of owners the big Tarmac miles is where it’s at.

So when I saw an opportunity to take the Beemer on a big trip to Europe I grabbed it with both hands. The excuse – the reason, I mean – for the trip was a mate’s wedding in Modena, Italy.

I just had to figure out how to get myself and the bike to Italy and back in a week, with enough time to do some nice roads and actually go to the wedding too. The answer to that problem came in the form of EuroBikeTrans (www.eurobiketrans.co.uk), a company that takes your bike to nice locations, such as Italy, giving you an option to just jump on a plane and pick up the bike at your destination.

That was it! The stars were aligned for a great trip. 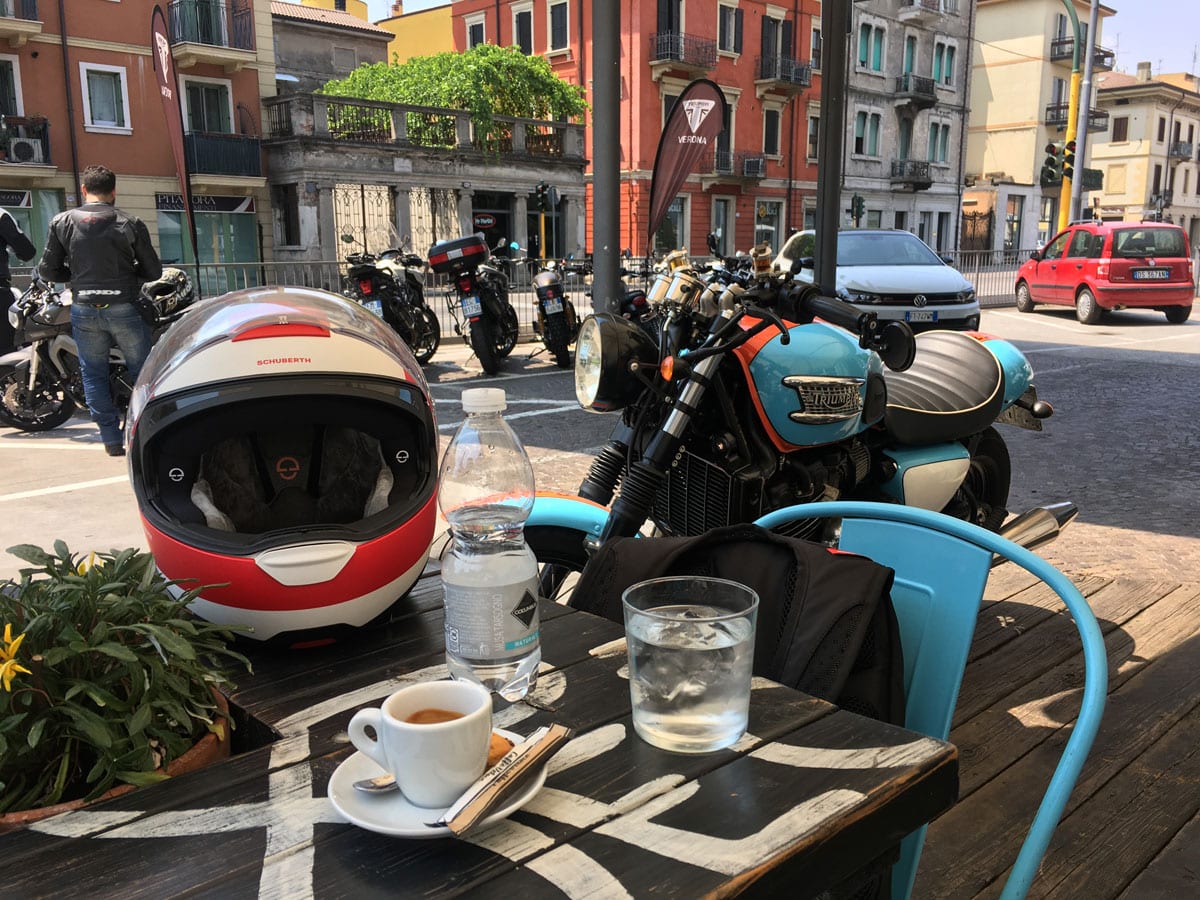 When I arrived at the EuroBikeTrans depot in Prato, near Florence in Italy, I was a bit nervous. Was the bike ok? Would I get it out of the depot without a fight? Was it even there?

As it turns out there was nothing to worry about. The bike was where it was supposed to be, in exactly the shape that it was when I had left it a week earlier in Manchester. I was on the road in a flash.

I had only booked one-way transport for the bike, so I could pick a nice Alpine route home. But first, I had to get used to the 38°C heat, riding on the right-hand side of the road, and not losing my patience with Italian drivers who seemed to think that road rules were mere suggestions, to be obeyed only if it suited you. 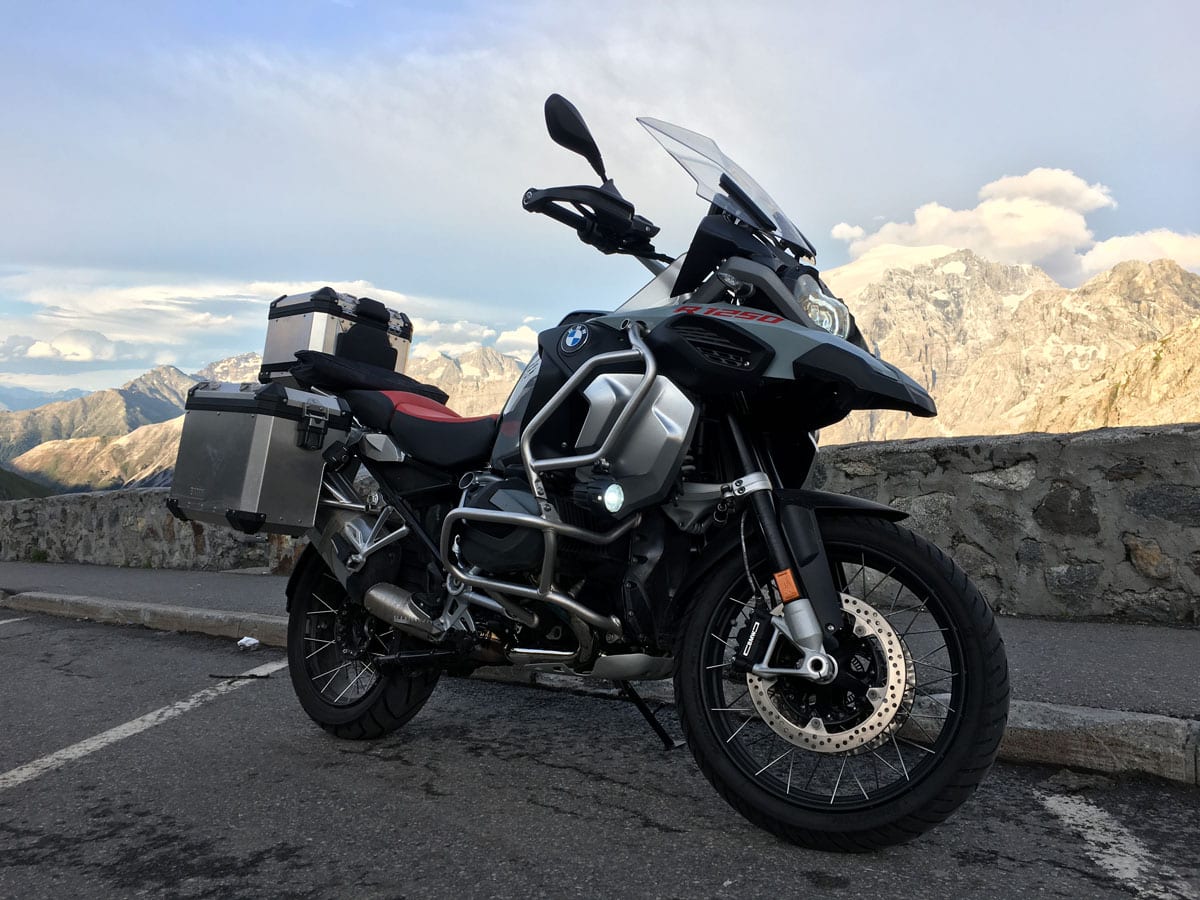 From the start, the GSA impressed me as a tourer; I had packed everything I could possibly want or need on the journey, and I still had space in the panniers; the upright riding position was relaxed and there were no aches or pains even after longer stints on the bike; the BMW-badged Garmin satnav picked nice curvy routes for me and only once I ended up on a glorified goat track (which in fairness took me in the right direction).

That last point also highlights why the GSA is such a versatile tourer. I was perfectly happy riding on the dirt track for a few miles where a lot of other bikes would have felt very much outside their comfort zone.

The BMW’s suspension dealt with the light offroading remarkably well, the balance of the bike felt natural even with all the luggage on, and the handling was effortless. Luckily there were no sections of the road so bad that I needed to stand on the pegs as the bars could really do with a bit of adjustment (or ideally a bar riser) to make this feel more natural.

Back on good old Tarmac the bike picked up exactly where it had left off, and my progress was once again speedy and effortless. Modena was approaching fast. 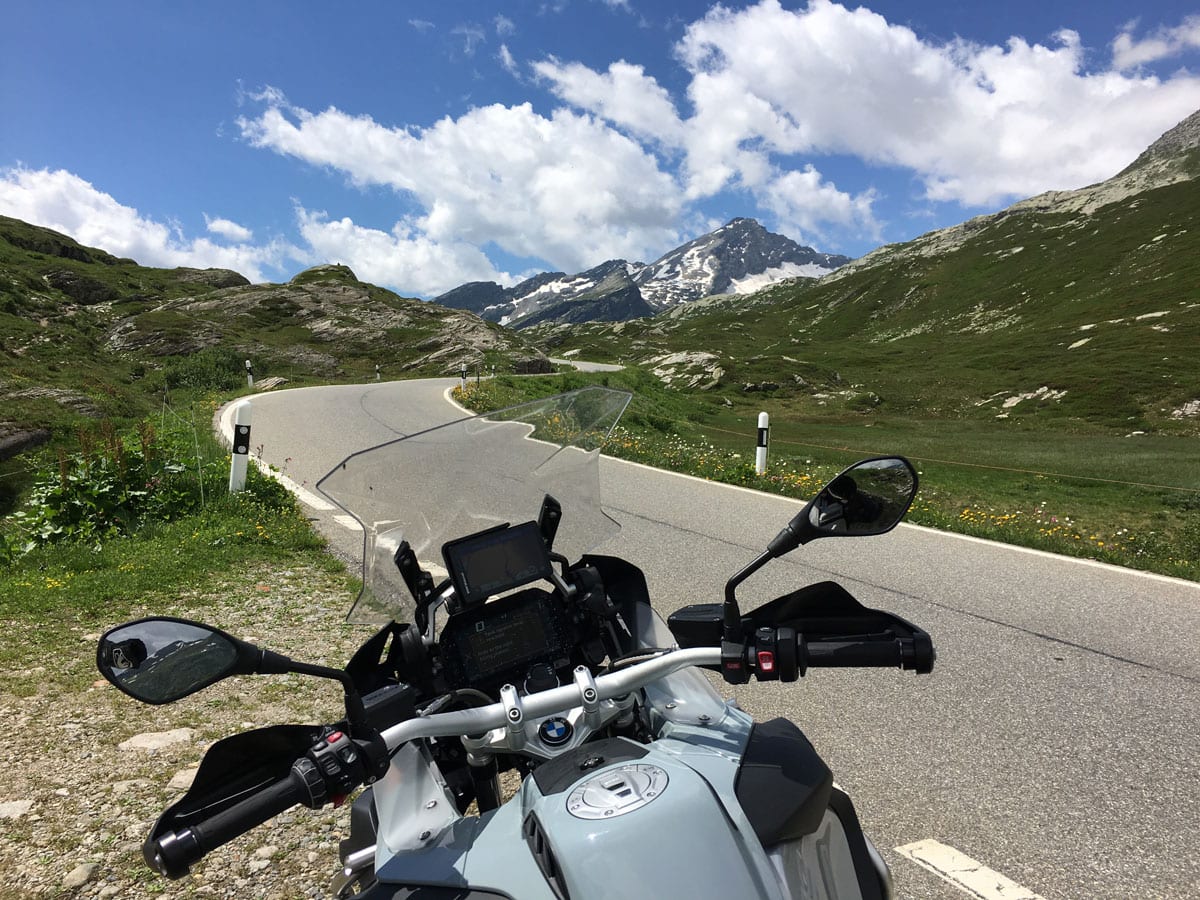 Italians don’t seem to do small weddings. The one I went to included not just a lavish and lovely day of celebration, but also a pre-wedding get together on the previous day and an after-party on the following day. The Italians sure know how to throw a party!

Once the wedding bells had stopped chiming and the dust had settled it was time to start the long ride back to the UK. The trouble was that I didn’t really know which way to go! My first choice was over the Alps, where I could enjoy a few nice hairpin roads and get some respite from the lowland heat that was still in the high 30s. The weather was looking quite iffy round there though, and I didn’t fancy negotiating those serpentine roads in pouring rain. That left me with the coastal option, heading over to the French Riviera and then up to the Atlantic coast.

The latter would have been the sensible option, but sensible choices aren’t my speciality – so the Alpine route it was. If the weather got bad I would deal with it then. 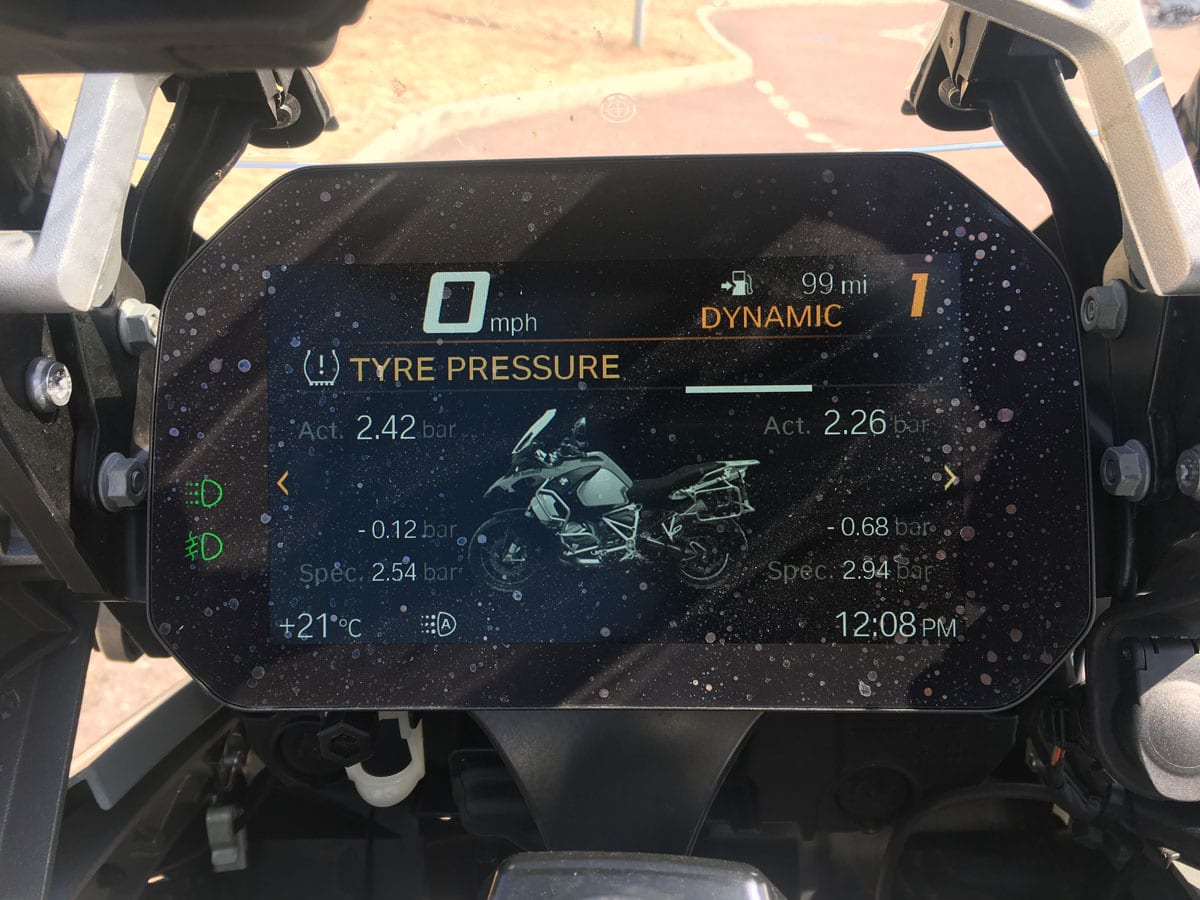 My return journey started in Modena, took me past Lake Garda and up the Alps. The first pass that I came to was the Stelvio. I had never ridden it, but it’s so legendary that I felt I knew it before I even got there.

I’m not a regular on these kind of roads, so I decided to make a few little adjustments. I lowered the seat (easy job, no tools) and set the preload to minimum (even easier, just a press of a button).

The combination lowered the seat height enough for me to get my feet comfortably on the ground, just in case I had to stop in a hairpin with adverse camber – I really didn’t want to have to lift the heavy bike off the ground round here. Another change I made was to select the Rain mode, even though I had been fairly lucky with the weather, and little showers were as bad as it got. It was more because I wanted the power delivery to be as smooth as possible until I got used to negotiating my way around the mountains.

Riding the Stelvio pass proved to be just as much of an experience as I had expected. The scenery was incredible and the road surface good, but the severity of the bends came as a bit of a surprise – I was happy that I had lowered my seat height as there were a couple of times I had to give way to oncoming traffic in places where finding a level foothold was tricky. 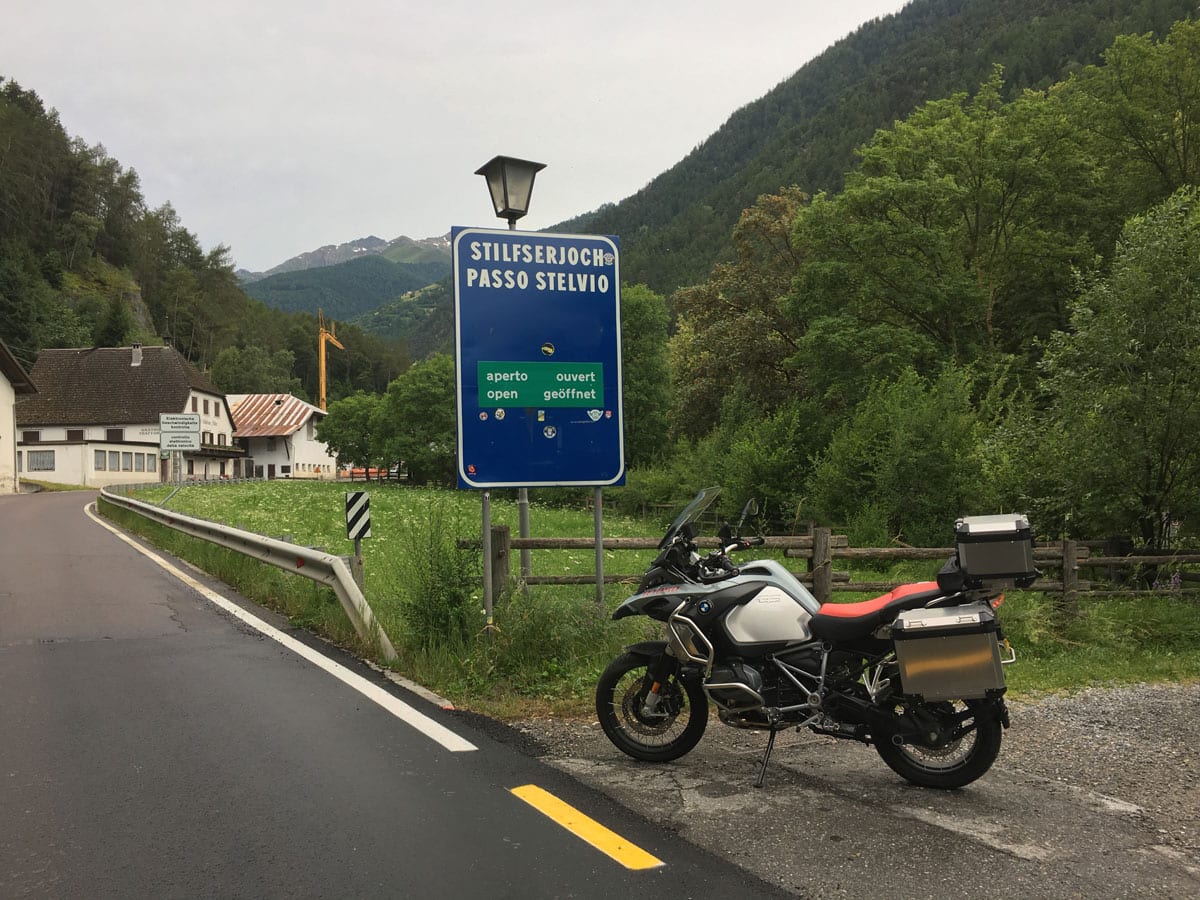 As I descended the Stelvio on the other side I realised that I had started with the more difficult side. Now the bends didn’t come quite so thick and fast, and the ride was more enjoyable, not just memorable.

The next pass I did after Stelvio was Slugenpass, which took me to Switzerland. It was a lot more easy going, and the biggest shock came when I stopped on the Swiss side and paid three times more for a cup of coffee than I had done in Italy.

From there the Swiss passes snaked up and down the Alps in quick succession. San Bernardino, St. Gotthard, Furka and finally Grimsel. They all were popular with bikers, with all manner of machines from CBRs to Harleys taking on the challenge.

The biggest biker crowd was at the top of Grimsel pass, which also had the most glacial snow and the lowest temperature – that 10°C felt nice after the sweltering temperatures of Italy!

As I progressed up and down the serpentine roads it became clear that had I done the whole trip in reverse I would have had a much more gradual introduction into riding the Alpine passes. Getting used to riding these roads was no doubt a part of it, but if I did the same thing again I would start where I now finished – or maybe I would get the bike transported both ways, so I could just concentrate on the good bit.

After the Alps, riding on ‘normal’ roads felt surprisingly good, and I enjoyed being able to go round corners at speeds I didn’t get to experience in the short straights on the mountains.

Not having to concentrate so intensely on every single yard, and having already covered a good amount of distance, this was the time when I started to find the limits of my comfort. The main problem was numb bum, which meant that coffee breaks had to come once an hour. This may be partly because of injuries I have suffered to my pelvis in the past, but the GSA’s seat could certainly do with being a bit a softer. I will look into some options back home.

Another fly in the ointment was the overly eager tyre pressure monitoring system, which kept popping a big warning message on the screen as soon as it thought that the tyres needed more air. I’d already had this in Italy, and when I went to put more air in, the reading on the air pump was much higher than the bike’s computer said it was. In France the difference was smaller, but the BMW system still seemed overly cautious. Something to keep an eye out for back home…

One big plus for the GSA as a touring machine is the shaft drive. At no point did I have to worry about chain lubing or tensioning. It just makes life so much easier.

The last day of riding was a long day, and I covered over 600 miles. For me that’s a lot more than I would normally choose to ride, but I was eager to get home, and the French toll roads made speedy progress a doddle.

Returning home after a week and 1500 miles I still felt surprisingly fresh, and the next day I picked up the bike again and headed for the office – this Alp-crossing world-shrinker had turned into a commuter again! But the travelling beast is just hibernating, waiting for another big trip.