The Monster Energy Yamaha Rally Team are putting the final touches to their preparations ahead of the Abu Dhabi Desert Challenge, and are ready for the final round of the 2021 FIM Cross-Country Rallies World Championship. With all riders feeling confident and knowing the significance of the race as the final competitive outing ahead of the Dakar Rally next January, Adrien Van Beveren, Andrew Short, and Ross Branch are all poised and ready to take to the start on November 7. 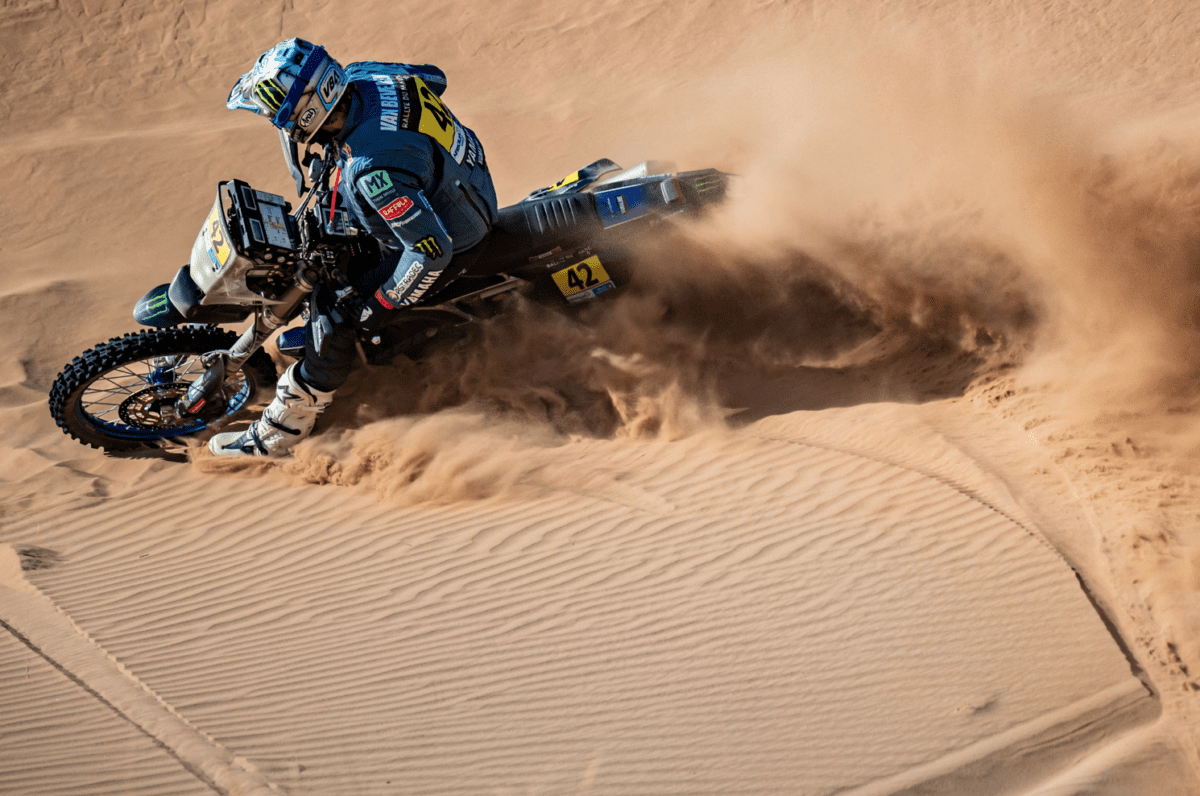 The fifth and final round of the 2021 FIM Cross-Country Rallies World Championship will bring to a close a rewarding season of racing and development for the Monster Energy Yamaha Rally Team. With the whole squad testing extensively throughout the year to further improve the Yamaha WR450F Rally, the Abu Dhabi Desert Challenge provides one last chance for the machine to be race-tested ahead of the Dakar Rally next January.

Following on from his strong fifth-place finish at the Rallye du Maroc just three weeks ago, Adrien Van Beveren has arrived in Abu Dhabi excited to take on the event for the very first time. With his physical fitness very much where he wants it to be, while also feeling settled, comfortable, and confident on his bike, the 30-year-old is enthusiastic about the upcoming five days of racing. Currently third in the series standings, a strong result at the season finale will secure the Frenchman a well-deserved top-three championship finish.

With the ultimate goal of producing a strong result at the fast-approaching Dakar Rally, Andrew Short knows the importance of completing the Abu Dhabi Desert Challenge. Excited to be racing in Abu Dhabi, and with the event offering a similar style of terrain to what’s expected at the Dakar, a confidence-inspiring finish is just what the American is aiming for before heading into the final stages of his Dakar preparation.

Competing at the Abu Dhabi Desert Challenge for the very first time, Ross Branch is another Monster Energy Yamaha Rally Team rider excited to be racing as he looks to build momentum ahead of Dakar 2022. Winner of the opening round of the championship, Ross clearly has the skills and speed to win and without the added pressure of contending for a series medal, he can focus on his own race and enjoy his time in the desert.

The opening stage of the five-day Abu Dhabi Desert Challenge begins on Sunday November 7 with the event drawing to a close on Thursday, November 11. Scheduled to cover 1,948 kilometres with 1,357 of those raced against the clock, the event marks the team’s final competitive outing of the year, bringing to a close the 2021 FIM Cross-Country Rallies World Championship.

Adrien Van Beveren – Monster Energy Yamaha Rally Team
“I’m feeling really good ahead of this race and I feel like I’m back to my best in terms of physical strength and how I feel on the bike. The Abu Dhabi Desert Challenge is a new race for me although I’ve ridden in the sand dunes here a lot, so I’m comfortable in the terrain that we will see in this race. I’ve been here for just over a week to get used to the warmer weather and I’m excited to get started and see what this rally is all about. I love racing so having this event just a few weeks after we were in Morocco, and with the Dakar not far away, it’s a great time to be a rally racer.”

Andrew Short – Monster Energy Yamaha Rally Team
“I’m excited for the last round of the series. The season hasn’t gone as well as I’d have liked, but throughout the year it’s been great to be racing again and with the team we’ve made a lot of positive steps forward. This race in Abu Dhabi will be another great test for me and it’s really important as the terrain, the culture, and the lifestyle is very similar to what we can expect at the Dakar in January. My main focus is now on the Dakar and this race in Abu Dhabi falls at just the right time to be an important final test. I’m looking forward to racing and my aim is to be consistent, minimise mistakes, and complete the race with a good feeling ahead of the Dakar.”

Ross Branch – Monster Energy Yamaha Rally Team
“The final race of the season has come around quick and I’m excited for it. It’s my first time racing in Abu Dhabi so it’s all new and I can’t wait to get started. This race is the last one before Dakar in January, so it’ll be the final test for the bike in a racing environment. My goal for this race is to take it as it comes, have fun, and enjoy it. Obviously, a good result would be nice, but the bigger picture is the Dakar and with that race less than two months away, it’s getting close. After the last rally in Morocco the team has continued to put in a tremendous amount of work like always so if we can keep building momentum through this race, then things are looking really good for the future.”

Alexandre Kowalski – Yamaha Europe Off-Road Racing Manager
“The Abu Dhabi Desert Challenge is a really important race for the team as it’s the last time that we will race the latest generation of the Yamaha WR450F Rally bike ahead of the Dakar. It’s been a long and productive season developing the bike and the progress that the team has made has been phenomenal. This race will be a great opportunity to test the bike in a racing situation and it’s important for the riders to give the best effort. There will be a lot of sand dunes and navigation will be tricky, especially during those opening stages, so it will be a great test in that respect also. This is the closest that the team has ever raced prior to the Dakar with the season ending so late this year, but we see this as a really positive thing. January is just around the corner so if Adrien, Andrew, and Ross can complete this race with a good feeling and positive results then this will be the best possible outcome ahead of the Dakar.”