MCM has been test riding UM Motorcycles enduro-inspired commuter, the DSR EX 125 – putting it through its paces across the Lincolnshire Wolds, taking in twisties, trails and the open road. 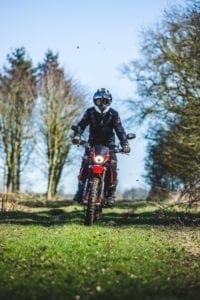 If you’ve not heard of UM Motorcycles before – that’s because it’s still relatively new to the European market, with distribution only beginning in earnest in 2016. But over the last couple of years the Latin American brand has made a real name for itself, mostly thanks to its focus on styling.

United Motors (UM) was founded in Colombia way back in 1951, importing and distributing cars, trucks and heavy equipment from the USA and Japan into Latin America – but primarily into Colombia. UM first entered the two-wheeled market in the early ’90s, forging agreements with large manufacturers in China and Taiwan – and it’s been selling bikes ever since, using its ties to the USA to strengthen the brands image on an international scale. It’s worth noting that in the UK, UM Motorcycles are looked after by Lexmoto – another importer who has cemented its place in the British market with a wide range of small capacity motorcycles and scooters. In fact, Lexmoto came away with Motorcycle Franchise of the Year for 2018 at the British Dealer News Awards – so in theory, you shouldn’t have any problem with warranties, spares or repairs from its extensive network of dealers. 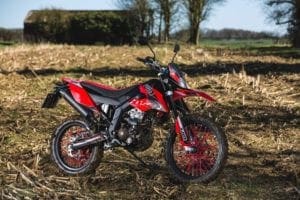 There’s no denying that the UM DSR EX 125 is a cracking looking little machine. Admittedly, I love my dual-sport bikes, and the UM definitely looks the part, with its aggressive styling, wavy disc brakes, bash plate, spoked wheels, off-road oriented rubber and 21” front and 18” rear wheels. UM like to play on its relationship with the USA – and as a consequence, there’s a little stars and stripes badge on the front mudguard.

Settling into its seat for the first time, you’ll no doubt notice its 920mm seat height. I stand at 6ft 1” with a 32” leg, and I could just about get my feet on the floor. Of course, it’s tall, and I have my doubts whether shorter riders would be able to swing their leg over the DSR EX with ease – but thankfully, its 124kg weight, slender frame and narrow seat mean that once you’re on (and the suspension settles), it shouldn’t be too much of an issue to lean the bike over and get at least one foot on the floor. 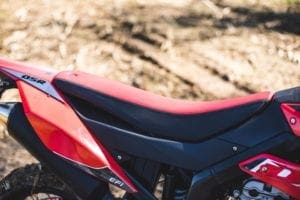 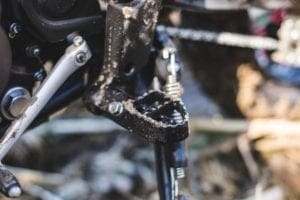 ON THE ROAD (AND OFF IT)

There’s nothing all that impressive about the DSR’s 124cc watercooled single cylinder, four stroke power plant.  I’m not dismissing it, but it’s a fairly basic 124cc engine – closely aligned with many of the far eastern imports that make it across to the UK. Regardless of its origins, it’s punchy and capable – with (just) enough grunt to keep up with traffic on A-roads, sitting at around 60mph at the top of its rev range. As with any small capacity commuter, you’re going to be up and down the gearbox a lot – but it offers a rewarding ride, encouraging you to push hard, carry momentum and squeeze as much as you can out of the small-capacity machine. Great fun. 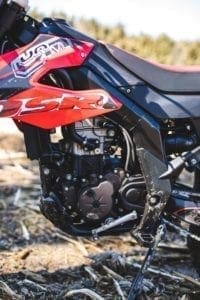 Brakes come in the form of single wavy discs front and rear – and they’re good too. Certainly not the most sophisticated, but well up to the job of stopping the lightweight machine in a hurry. Suspension is decent too, in the form of USD forks at the front and a monoshock at the rear. I found it to lean slightly towards the stiffer side of the spectrum, but with more than enough give to soak up the worst bumps and jumps I could throw at it with little fuss. On the road, it handles surprisingly well – particularly considering it’s clad with dual-sport tyres which can sometimes offer a slightly vague feeling from the front end as you push into corner. Not on the DSR EX though. It’s solid, stable and confidence inspiring. 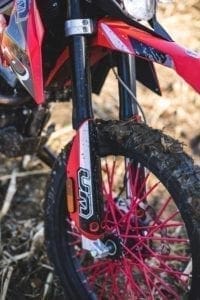 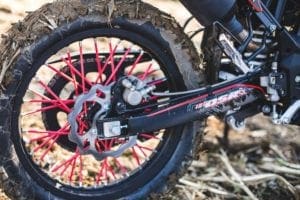 Out on the trails is where you’d expect the DSR to really come into its own – and although it’s a surprisingly capable little trail bike, thanks mostly to its light weight and 21” front and 18” rear wheels, I have to confess to being a little disappointed with the levels of grip on offer from the CST dual-sport tyres. In the dry, they were well up to the job and I thoroughly enjoyed throwing the agile little machine around off-road, but after a particularly heavy downpour, the DSR seemed to struggle to find grip and the front end felt a little vague. I was pushing quite hard though – and I’d expect some more off-road oriented rubber would sort the issue with no fuss. Of course, it’s also important to remember that the DSR EX is not a performance machine. It’s just a tricked out (borderline-budget) commuter, with some off-road rubber. And it works. 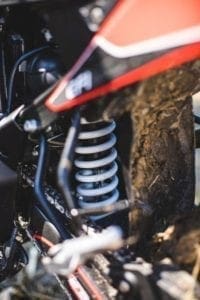 Personally, I think there are innumerable advantages to dual-sport machines. If I could have one bike to ride all year round, right through winter in the wind, rain and snow – it’d be a little small capacity trail bike. They’re lightweight, agile – and offer a bit of confidence when the surface isn’t quite up to scratch. Ok, so the UM DSR EX 125 isn’t going to be all that comfortable for bit miles, and it’s not exactly laden with the latest and greatest technology and equipment – but if you’re looking for a simple and straightforward commuter, that’s as happy on the road as it is on the trails, I’d encourage you  to test ride one.