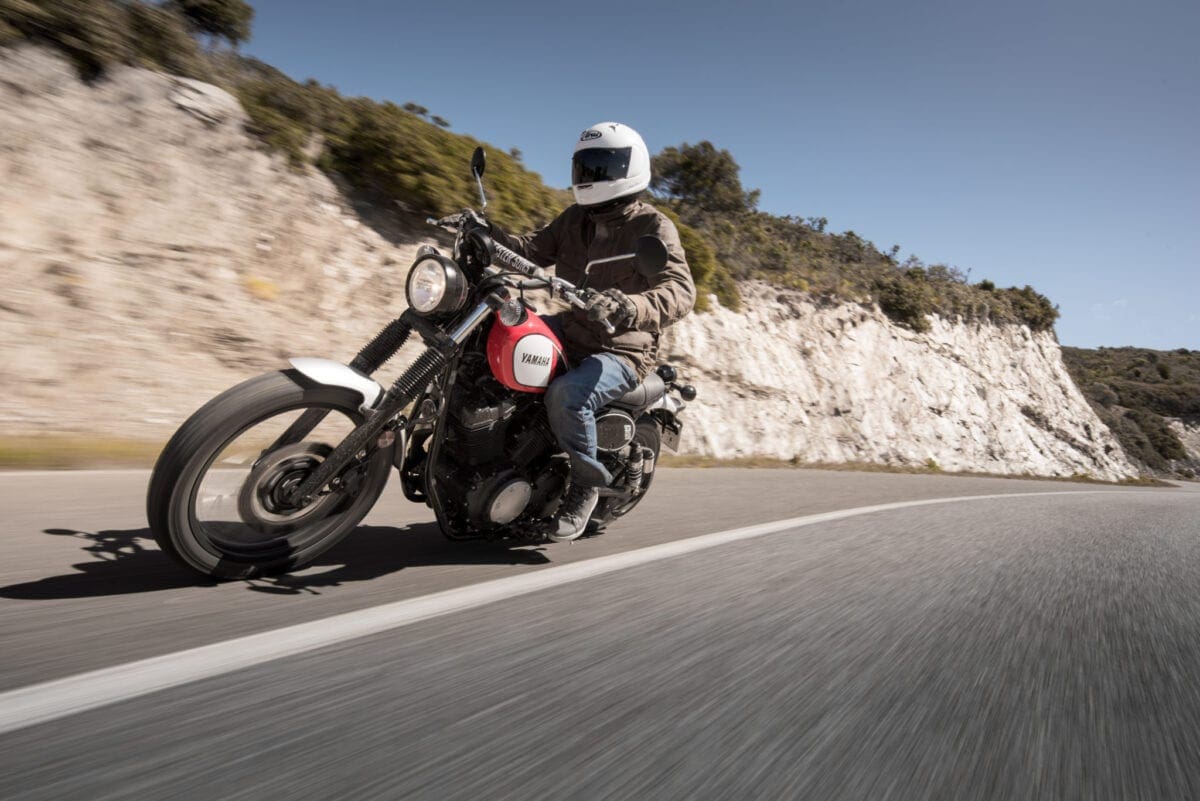 Yamaha’s SCR950 is hampered by its marketing. Described as being: “Inspired by the street scramblers of the 1960s,” many journalists’ default position will be to thrust it straight into a pigeon-hole already swollen with the likes of Ducati’s Scrambler, Triumph’s Street Scrambler and BMW’s R-nine-T Scrambler.

I’d consider the XSR700 to have more potential to embrace the ideals of the scrambler stereotype, but the SCR950 is much closer to its cruiser roots. Is that a bad thing? I don’t think so, and taking into account the low-slung main-frame and lazy 942cc V-twin, the new Yamaha is a characterful machine that’s a lot of fun to ride. 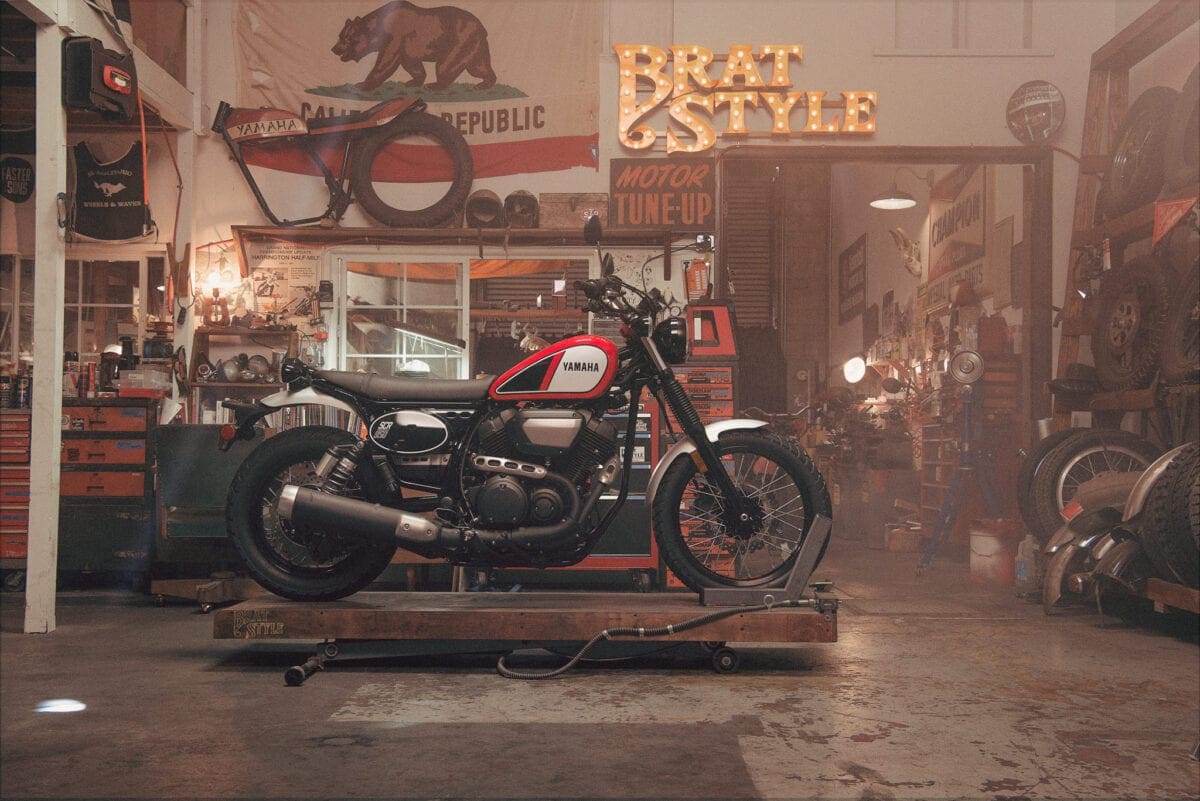 “Born to find new ways,” is the moniker of this latest Sport Heritage bike, and our 100km launch route took in a rocky-bottomed water-crossing, and several miles of loose gravel tracks. I’m not the best off-road rider by any stretch of the imagination, but the SCR was far more fun to plough through the dust than it had any right to be. 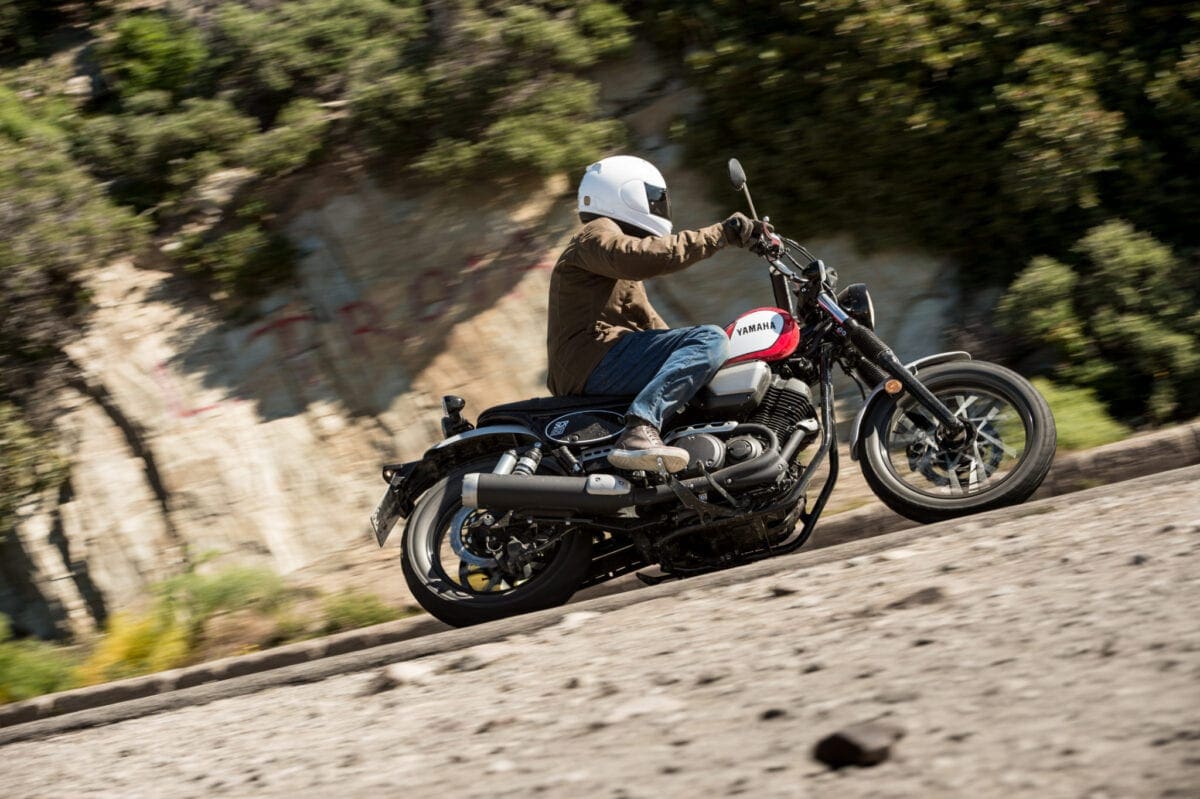 Weighing 252kg fully fuelled, it’s no lightweight – that mass of course fades into insignificance as you pull away, but it’s pretty obvious as you pick the bike up off the stand. Ground clearance is 10mm higher than the XV950 sibling, but at 145mm, it’s not going to worry Ducati’s Scrambler at 170mm or the massive 240mm of the Desert Sled version.

It’s understandable that some journalists on the launch would compare the SCR to the off-road focussed Ducati and at £9395, it’s not that much more expensive. But all it shares with the SCR is the perception of a name. Group-tests will no doubt pit the Yamaha against the Ducati, BMW and Triumph, but it’d be an irrelevance. 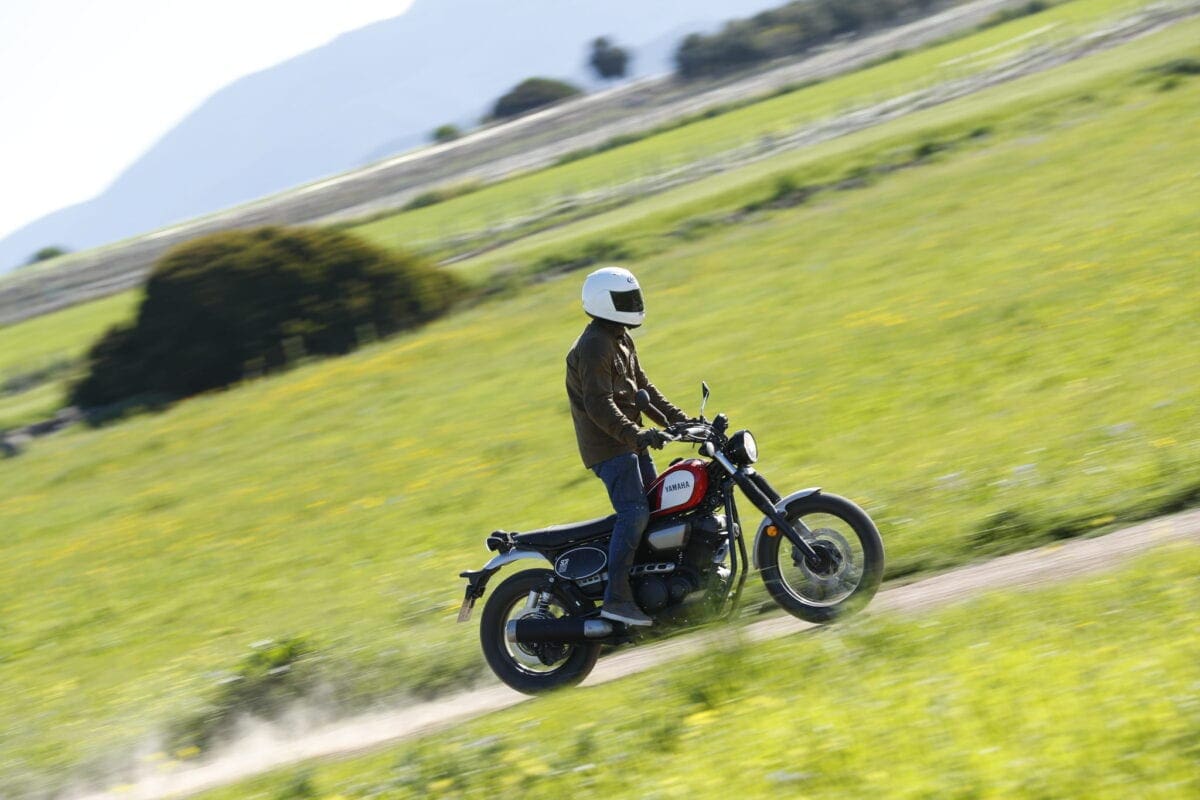 Bouncing across the track, chasing five other SCRs, I didn’t worry about the weight, and the ground clearance only showed itself when I crashed down into a large pothole I’d missed in the dust left by the other riders’ Bridgestone Trail Wings. I’m 5’10”, and could get my feet down easily, and later, as we turned the bikes around for a photoshoot on the loose, gravelly lay-by, I appreciated that. 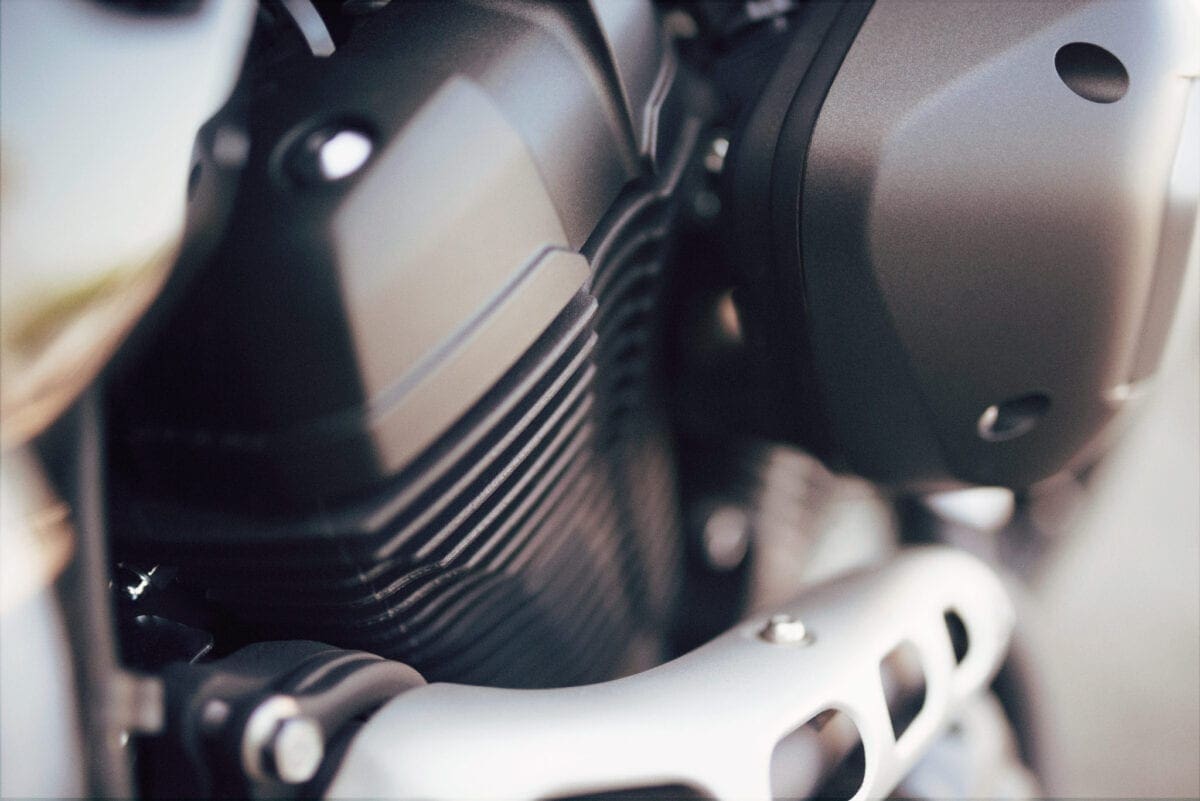 The SCR has the same engine and main chassis as its XV950 cousin, though the suspension has revised internals, and there’s a new sub-frame that allows for the flat, bench seat, which gives plenty of space to move around on, as well as making it easier to stand up. The pegs are the biggest help to this, having been lifted by 30mm, and brought back by 150mm. While you might not realistically spend a lot of time needing to get upright on the SCR (it’s great fun on tracks, but the typical rutted UK green lane might be a bit much), having your feet beneath you takes a lot of the weight off your bum, giving what many will find a more comfortable position than the typical cruiser.

While things are higher on the new Yamaha, it’s still surprising how quickly the pegs touch down on the road. Tipping into corners, the hero-blobs on the sprung footpegs are all too willing to scrape, though at least they give you a warning that you shouldn’t push much harder. Some on the test touched down the peg’s mounting bracket on the right, which didn’t lift the wheel, but did give some cause for concern. Still, I didn’t find that point on the spirited test ride, and maybe it’s the upright riding position that tricks you into thinking there’s more room beneath. 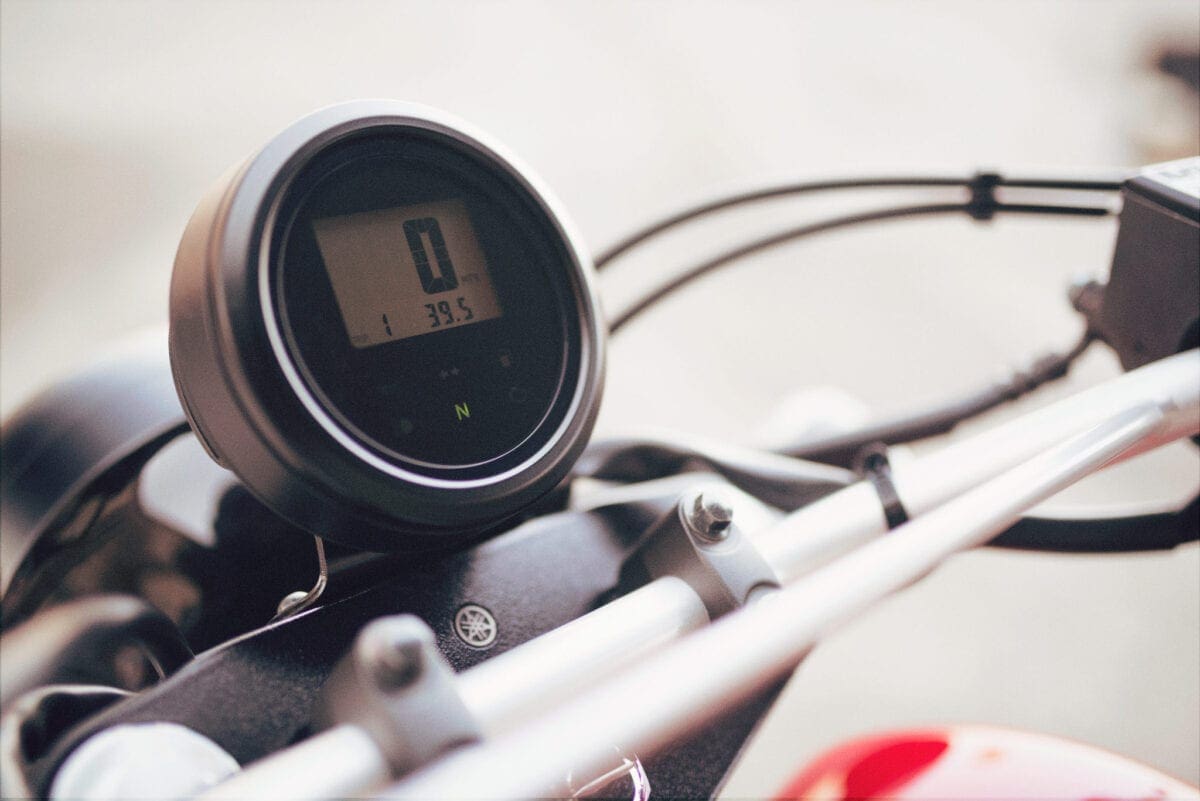 The clock looks a bit of a let-down to me, with the small LCD set into a large, round dash. Using an XSR-style full LCD unit would have looked better, or even simply making the display a negative, white on black design. The information on offer is basic by today’s standard, with just a speedo, odometer and a pair of trips, along with the usual cluster of idiot-lights, though these are a little tricky to see in bright sunlight. Still, it’s something many customisers will look to change anyway…

Another opportunity for more serious personalisation, in keeping with the Yamaha Yard Built ideals of making bikes unique, is the space under the seat – with the side panels off, it looks like there’d be a lot of room to strip out the battery box, replace it with a small lithium pack, and create an open look to the rear of the frame. The ABS module would need covering, or perhaps even removing, but there is a lot of potential here. The space under the seat is sadly wasted anyway – there’s a lot of room as it is, but with the seat bolted in place, there’s no real way to take advantage of it. 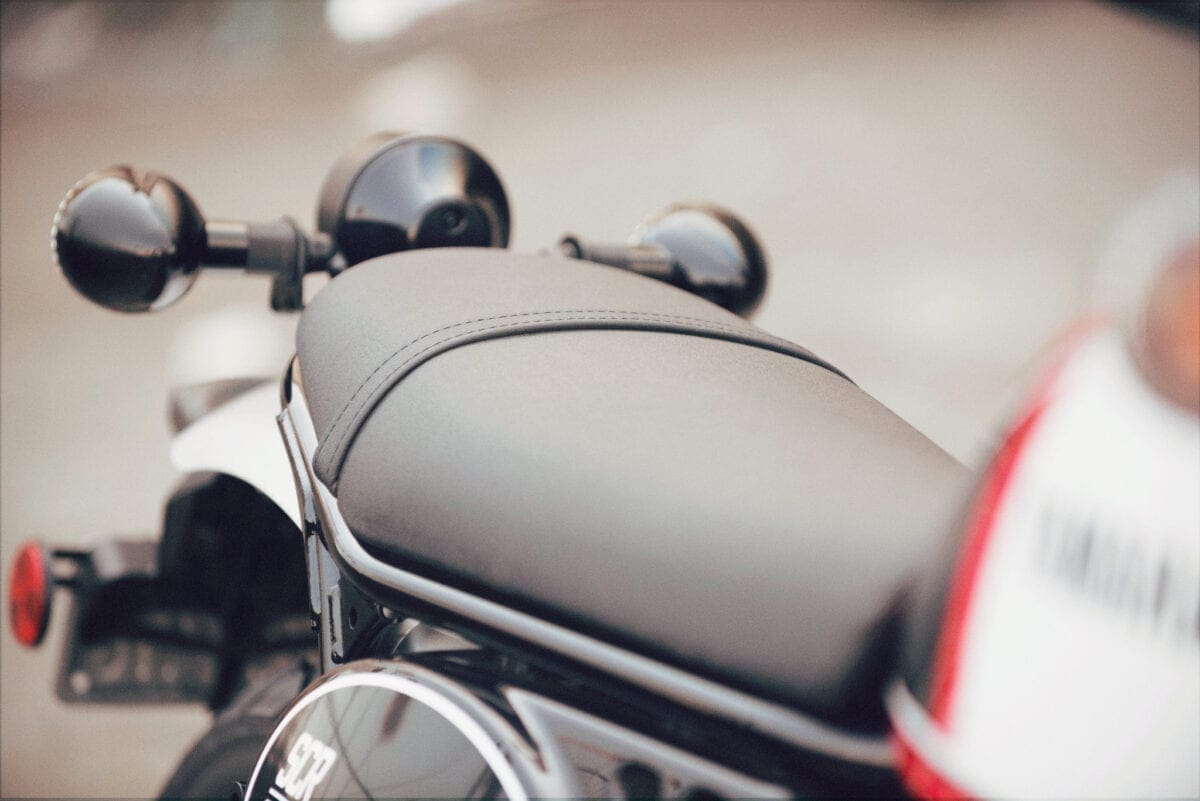 I’d also love to replace the air-box with a pair of free-breathing cone filters – not only would it help the Euro 4-stifled air-cooled motor release some power, it might create a little more space for my right knee. Not that it makes for an uncomfortable riding position.

Your left leg also presses against the rear cylinder head, as the pots are offset to the left of centre. A plastic cover disappears into the styling, and works with a single-piece metal ‘cage’ that prevents your leg from getting cooked. In the warm Sardinian weather, while we didn’t do any city work, I certainly never felt the heat of the motor.

Characterful as it is, the vibration from the big twin isn’t intrusive, yet it feels alive, and in high-walled, tight streets, there’s a decent note from the exhaust. A more free breathing can could sound brilliant, as well as releasing some more power from the 51bhp motor. Tuning this lump could be an awful lot of fun, but the healthy amount of torque from so low down means I tended to use just third and fifth gear for almost all of my riding, except when pulling away from a standstill. The closest Harley to compare this to is the Iron 883, which makes 50lb-ft @ 4750rpm. 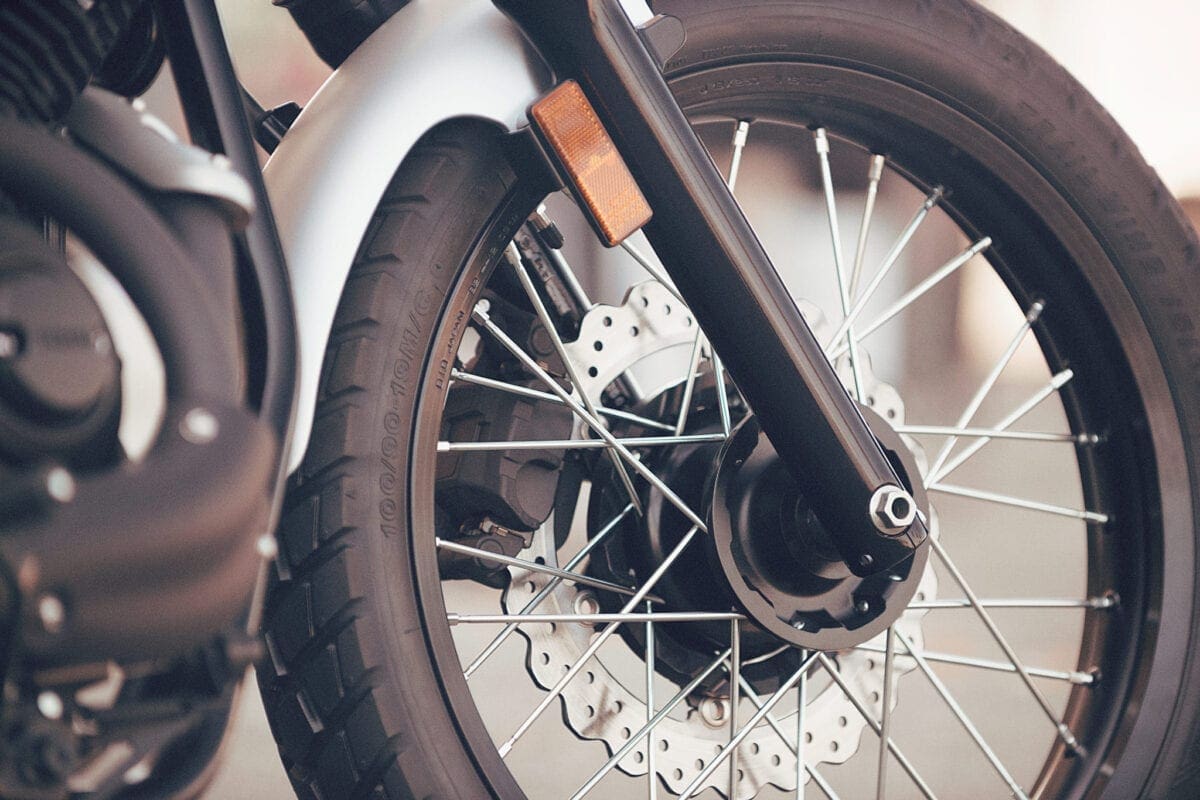 The brakes are best described as adequate – while there’s no real bite from the twin-piston front caliper, or the huge rear disc bitten by a single-piston, I never felt panicked, and I’m not sure the chassis would benefit from anything much more aggressive.

Of course, the suspension isn’t plush like an adventure machine, but it is compliant enough for most surfaces. Over rocks and holes off road, it could get a little crashy, but this is a heavy motorcycle. Tackling fire tracks will certainly be more comfortable than on any cruiser I can think of, and on Tarmac, where these bikes will really spend their time, it was compliant enough to be comfortable. And again, those rear-set pegs give extra damping through your legs that’s lost on a typical feet-forward cruiser.

Yamaha is quite realistic about the potential buyer – it’s not going to be a motocross champ, more likely either a 35 to 45-year-old commuter and pleasure rider looking for a machine to customise, or someone older and more experienced, perhaps after something easy to ride.

This is not a bike to be hurried, and honestly, I really appreciated being on something that makes me want to ride at a slower pace. To my eyes, the SCR950 is a unique machine with a great deal of appeal.

Will buyers really worry whether they can ride this across a desert? I’ve got to say that I have something of a soft spot for this bike – I could imagine myself having a lot of fun pottering around, as well as commuting. And maybe I wouldn’t go as far as Africa, but I quite fancy riding to Wheels and Waves in Biarritz again on one of these. Some canvas panniers and a roll-bag, and I’d be all set… 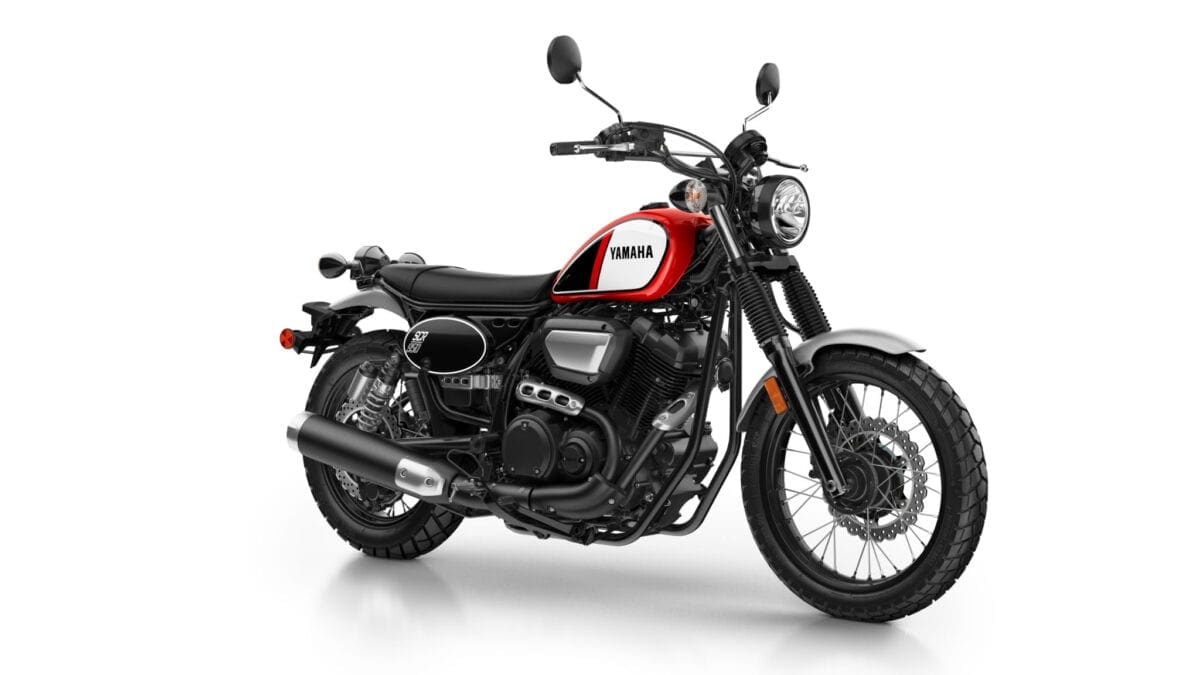 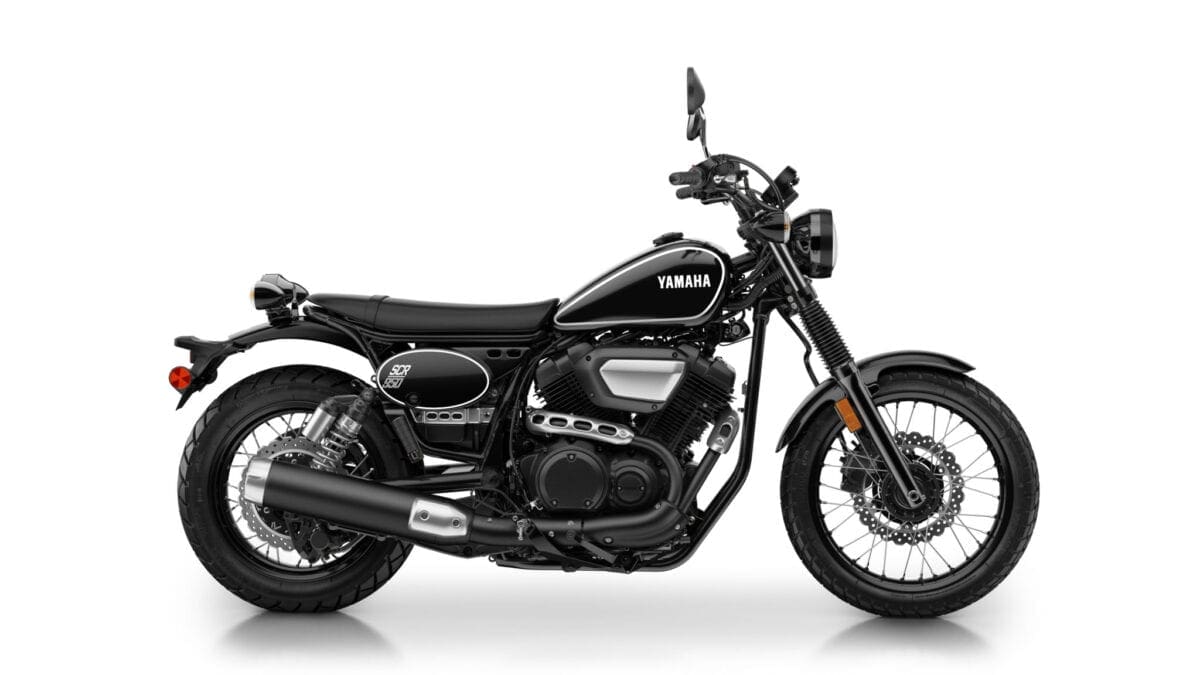