Milan show: Husqvarna Vitpilen 401 and Svartpilen 401 confirmed for production in 2017 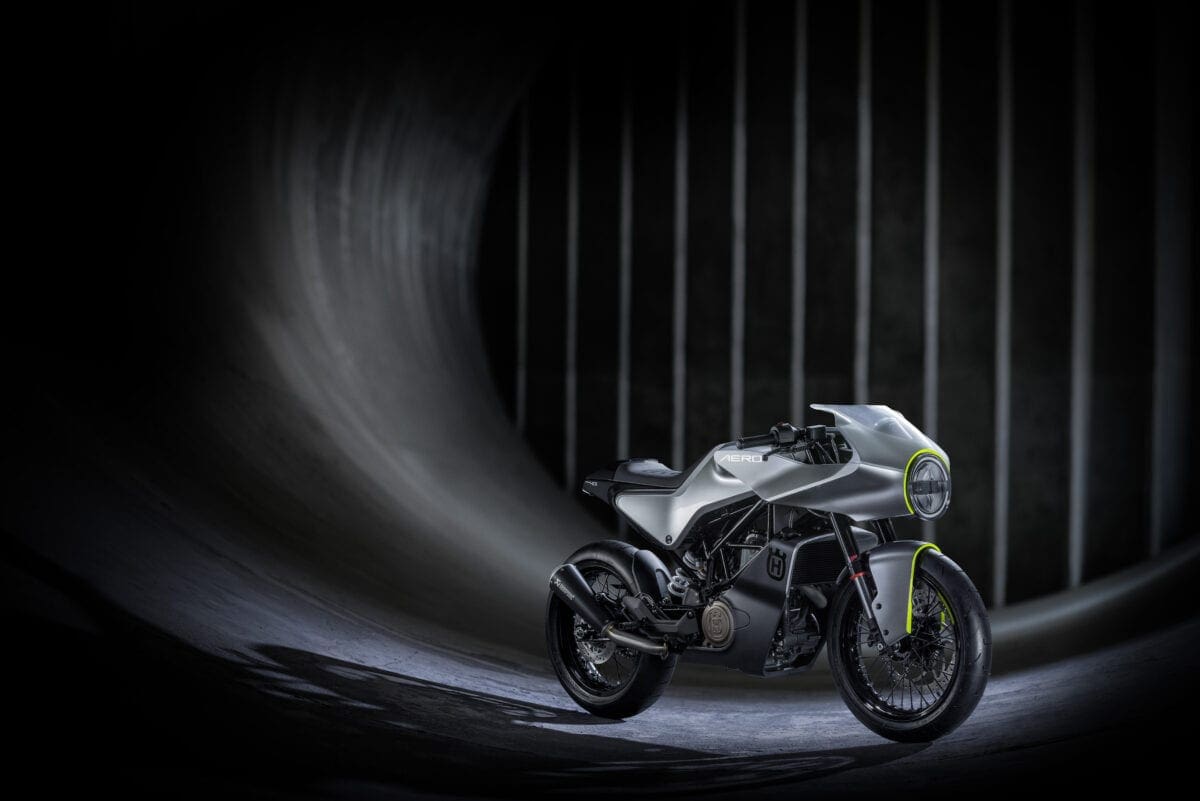 Designed to make motorcycling more accessible, stylish and appealing, the new bikes are miles away from what we are used to seeing from the Swedish manufacturer.

Husqvarna says it will be rolling out these new production bikes at dealers by late autumn 2017.

In addition to the new production bikes, Husqvarna also confirmed that the single-cylinder Vitpilen 701 remains a concept at this stage.

This is what Husqvarna says about the new bikes:

The Husqvarna VITPILEN 401 marks the start of an entirely new segment in the motorcycling world, it is free of excess and reduced to its simplest form. This bike aims to appeal to an entirely new generation of motorcycle users. It’s for those less interested in the hype and hyperbole of modern day motorcycling and who prefer a simpler, more style-orientated approach. Its technologically advanced 4-stroke single-cylinder 375 cc engine is housed in an incredibly stripped down but progressive layout that offers excellent performance, yet doesn’t boast about how racy it is. The basic idea and inspiration behind the bike was to create something completely reduced, while turning heads from an aesthetic point of view.

Ultimately it’s as accessible as a motorcycle can be, it’s honest and can be ridden by anyone with the will to learn.

In terms of style and design, the VITPILEN 401 is reduced to nothing more than what is absolutely essential. With respect to the past it is simple, obvious and forward thinking in terms of the technology used, as well as the entire package itself. 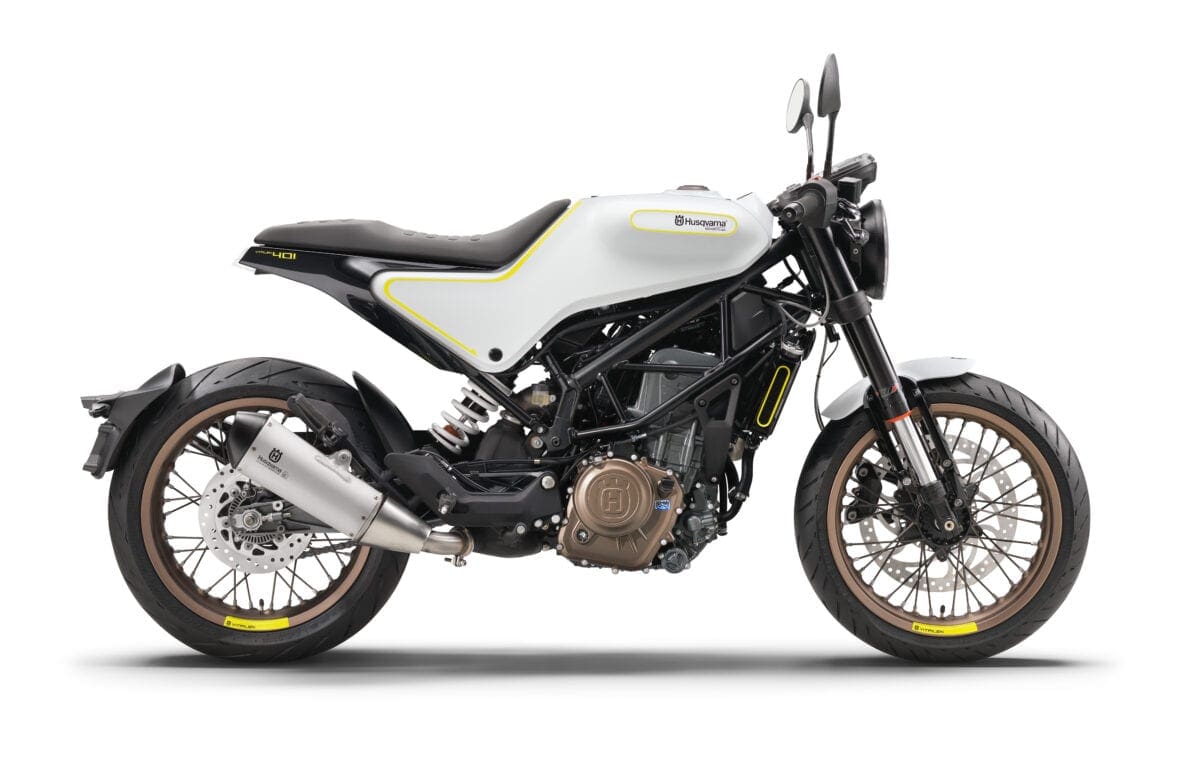 The way in which the volume was sculpted is extremely sleek and pure, forming clean and soft lines. By contrast the shape itself is very intentional and well defined.

It is most certainly very approachable and accessible. Dynamic thanks to a more engaging position, which is far forward enough to be in full control while remaining relaxed thanks to its clip-on handlebars and natural ergonomics.

The surface treatment (the way in which the bike was sculpted) is distinctive in that there’s a contrast between the softness of the design and the extremely defined shapes on the tank. This forms very precise elements and fitting lines on the surface. Underneath, it is fully equipped with premium components including LED front and rear lights, WP suspension and a modern fuel-injected motor amongst other features.

The bike was designed to be as simple to ride as possible, without all the unnecessary electronics and rider assistance. It is designed for a ‘sit down and enjoy the ride’ experience. 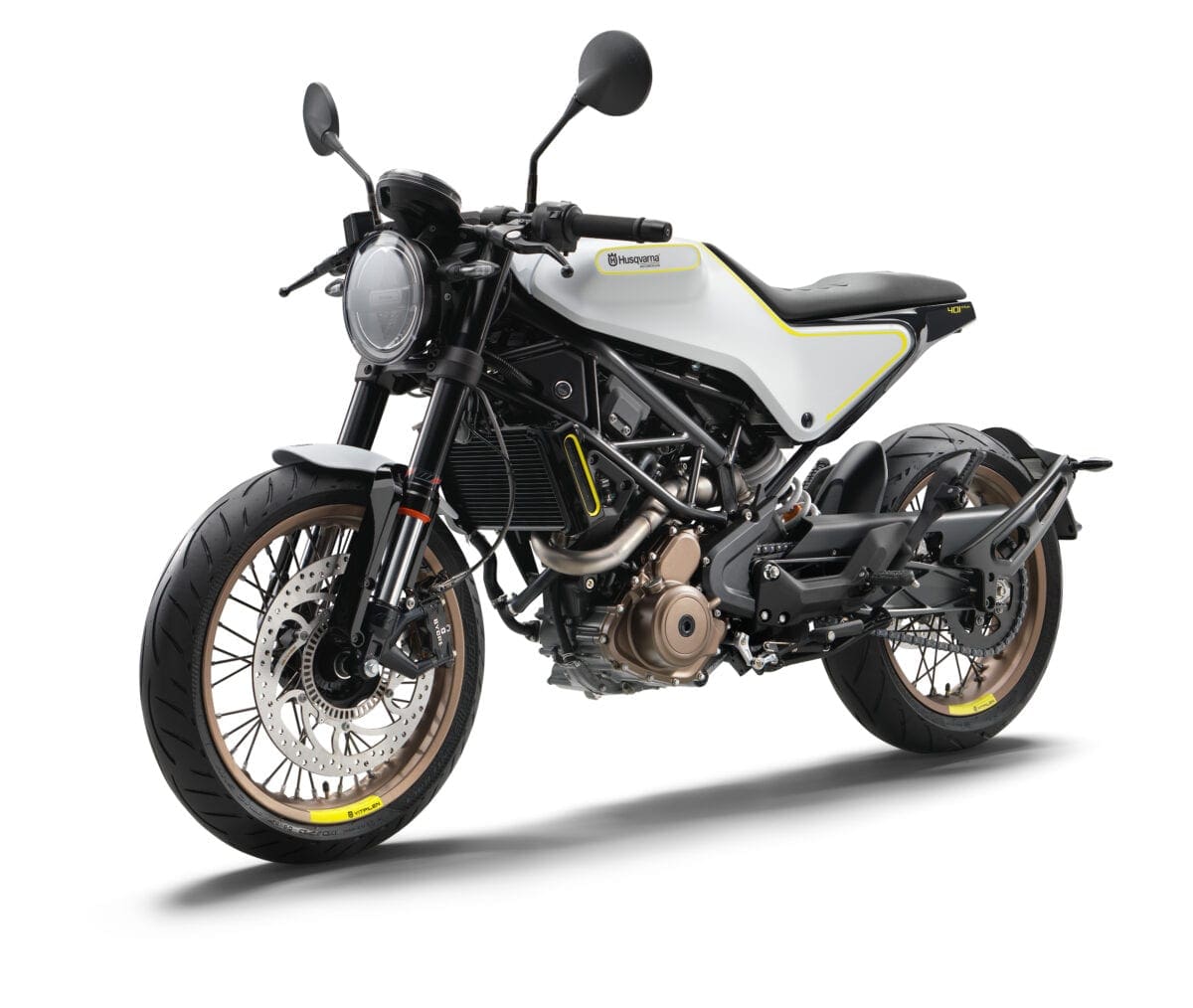 With it’s unique, bold and rugged appearance, the Husqvarna SVARTPILEN 401 is a modern single-cylinder 4-stroke set in a compact and thoughtfully designed package. Beyond its styling and exterior though, it has a high-focus on functionality, so comes with rugged knobbly tyres, a practical tank rack and more robust protection than its VITPILEN 401 sibling, which includes a protective skid-plate and exhaust protector. The riding position on the SVARTPILEN 401 is also more upright because of its higher and straighter bars.

The SVARTPILEN 401 has a more rugged style to it. The parts are designed with an obligation to not just look good but to be fully functional as well. With a nod of respect to the honest and simple way that motorcycles were created in the past, yet with truly modern equipment and styling. 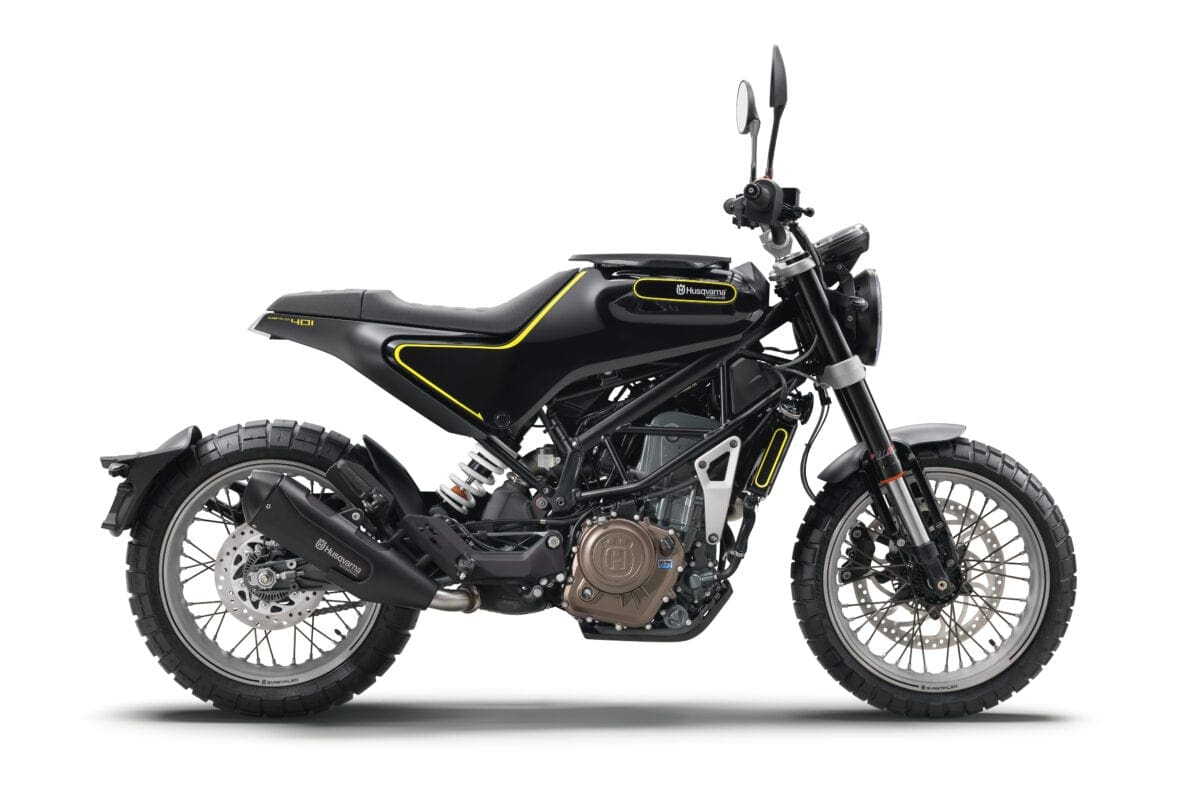 For the SVARTPILEN 401 functionality plays an important role and you can see that when you take a look at the bodywork, more robust protective parts were incorporated into the design – such as an exhaust protector, skid plate and tank rack, which form the basis for a modern day scrambler.

Fitting with its higher bars and knobbly tires, the riding position for the SVARTPILEN 401 is more upright and centred than its VITPILEN 401 sibling’s slightly tucked rider’s stance. 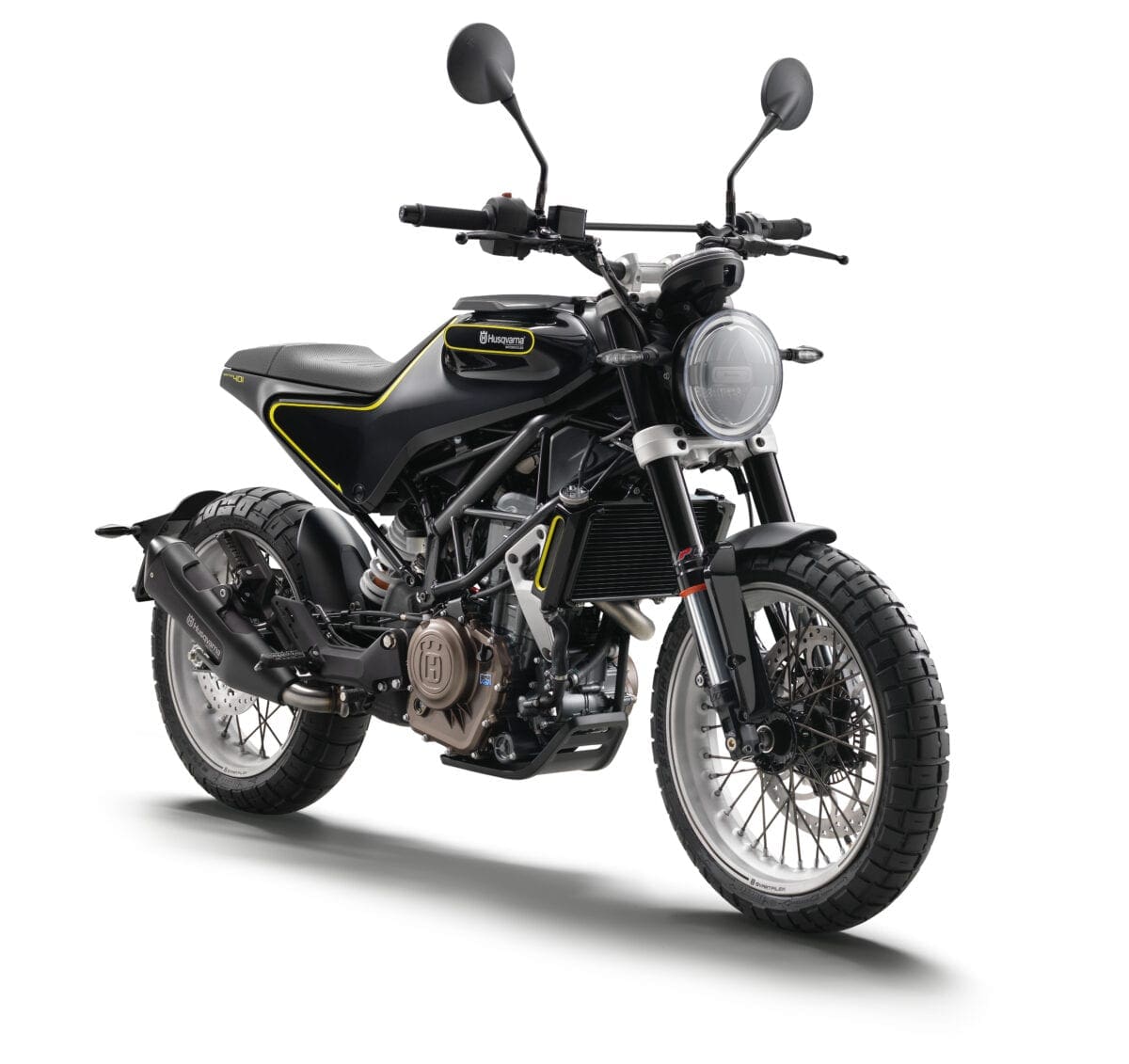 The SVARTPILEN 401 is fully equipped with a split seat as well as knobbly tyres, a protective skid plate, exhaust protector and more rugged footrests in a modern chassis with progressive engine technology.

Who knew being seated completely upright could be this relaxed? Rediscover your urban environment aboard this agile, functional and raw riding machine. 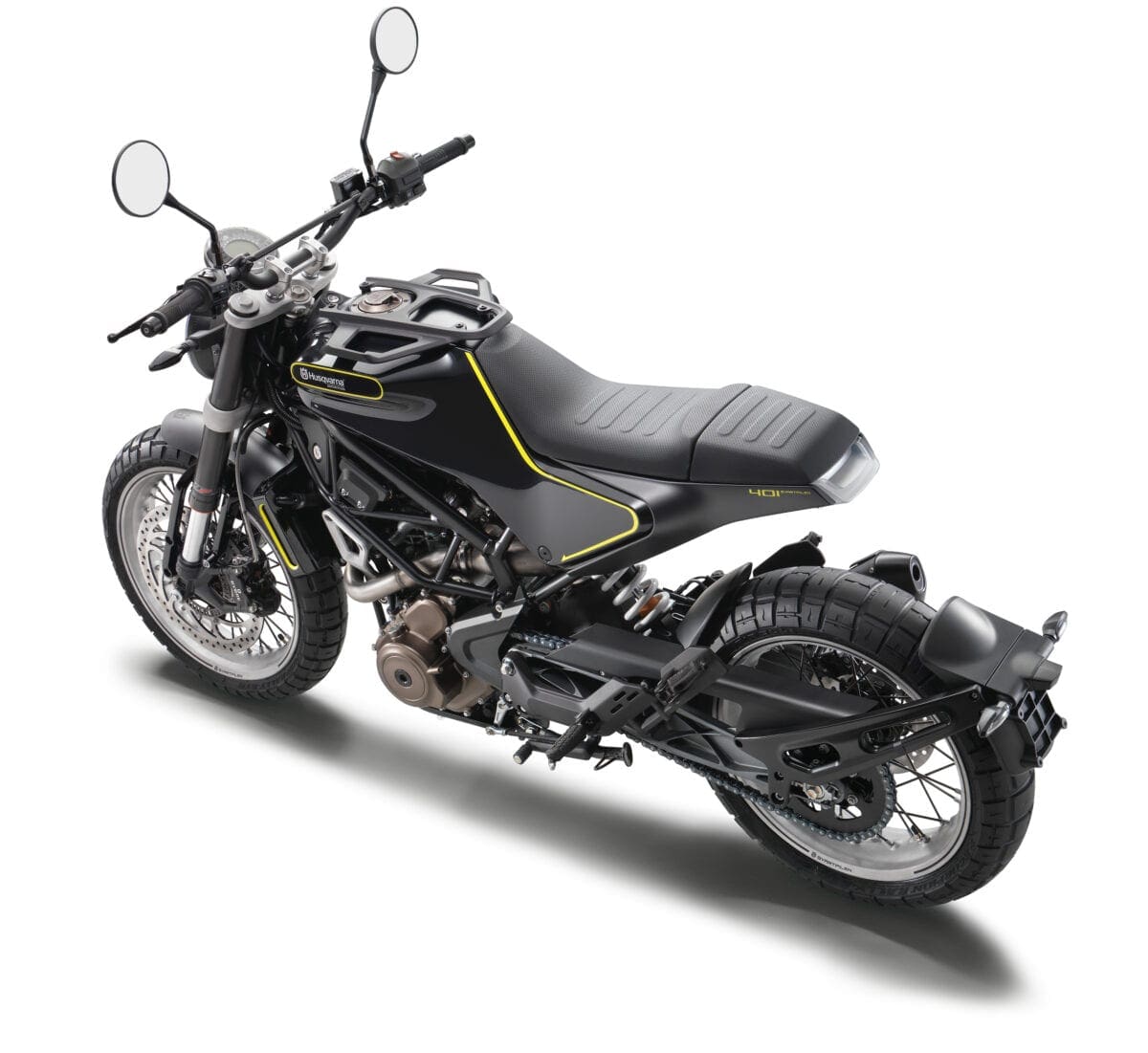 With its innovative design approach, the VITPILEN 401 AERO appears to have been moulded by the wind itself. A break down of the fairing shows that the design elements of every aspect of this bike have been thoroughly thought out and well executed, even the unseen structure holding the fairing in place has an air of elegance to it. Ultimately the VITPILEN 401 AERO is a modern take on what a forward-thinking, faired motorcycle should look like.

Every part of the windshield is purely technical; all the parts speak the same design language, while functionally more air is channelled over the engine, keeping it well cooled. The paint job for this bike is something special; a brilliant silver with a touch of black completes the bike’s aesthetics.

The style and design feels very familiar, yet it is clearly recognisable and has a distinct personality. It’s a modern take on a faired motorcycle, inspired by aerodynamics. 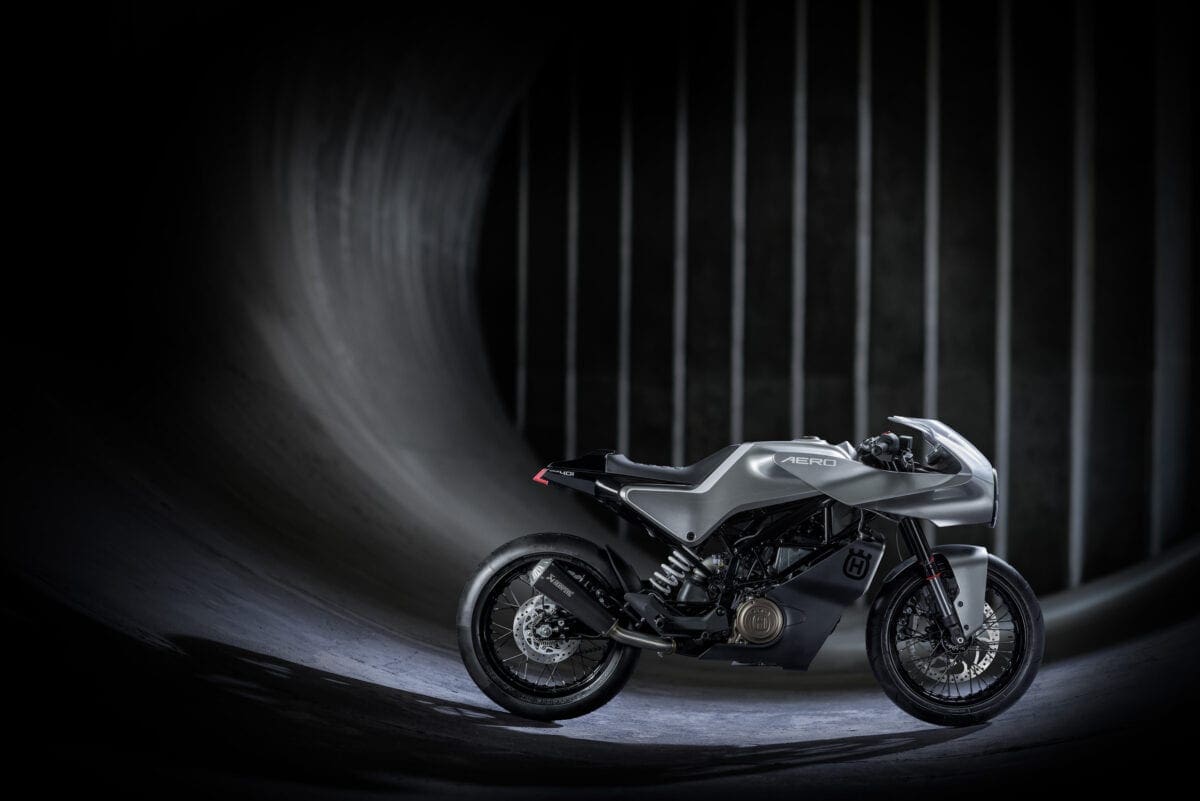 The addition of three parts completely changes the whole set up of the bike. An all-new windshield gives the VITPILEN 401 AERO’s surface a fuller appearance compared to the VITPILEN 401, while allowing the front and rear of the bike to perfectly match each other. This manages to create an entirely new balance and very different proportions versus those of the VITPILEN 401.

The VITPILEN 401 AERO encourages a lower, more locked-in position thanks to the new windshield design which completely changes the position and perception of the cockpit for the rider.

With the VITPILEN 401 AERO – three simple yet innovative new parts form an entirely different bike on an already progressive technical base.

This bike is so well aligned that when you’re seated in position you become one with it, the windscreen lines up with your helmet and you become a part of the flow of the bike, providing a fully immersive riding experience. 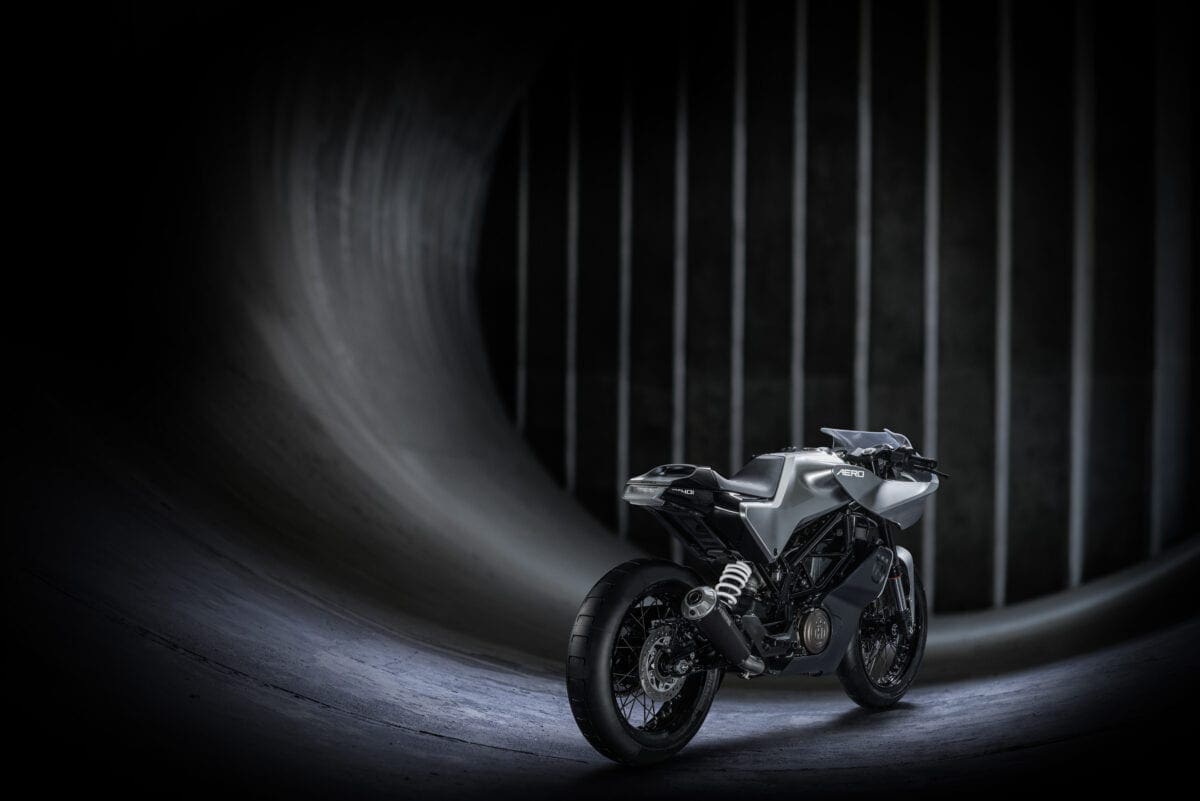 The VITPILEN 701 is Husqvarna’s future street bike concept. It marks the next logical step in their return to street motorcycling and reveals the potential of Husqvarna Motorcycles’ future vision. A sophisticated single-cylinder 4-stroke motor housed within a minimalistic yet high-tech layout – created to provide a raw, exhilarating and authentic riding experience. Functionality, simplicity and practicality were central to the basic idea and inspiration behind this bike. Its uniqueness is not limited to the aesthetics though, and will be instantly noticeable from the raw, natural and intuitive experience of riding it. The VITPILEN 701 concept bike’s designers believed strongly that something fresh was long overdue in the motorcycling world, so they set out to create a bike that better captures the timeless thrill of the ride. The VITPILEN 701 was created to reflect the progressive attitude and styling of a more modern and freethinking breed of rider.