MoreBikes has recently had a couple of opportunities to ride the latest incarnation of Honda’s iconic Monkey. First, we took the chance while out on the launch of Honda’s premium Forza 125 and 300 scooter out in the South of France, and spent a couple of hours bombing around Nice. And then a couple of weeks later, we were invited down to the official UK launch in Central London – and made the pilgrimage from Ace Café across to Bike Shed. Here’s what we think of the all, new Monkey 125. 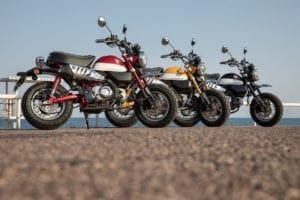 With its chunky tyres, mini-‘ape’ style handlebars, miniscule fuel tank and big, squashy seat, the Monkey is arguably one of the most iconic motorcycles in existence. Its popularity was mainly as a result of its instantly-likable design, tiny dimensions and ultra-light weight – which made it a whole load of fun around town. And because it was so easy to ride and unintimidating to look at, it could be argued that the original Honda Monkey sold the idea of motorcycling to the general public, more than any other machine in history.

The original Monkey was actually a 49cc child’s toy, designed for Tama Tech (an amusement park in Tokyo), before being developed into a fully road-going version as a result of its popularity. And now, Honda’s iconic mini-bike has been re-imagined for the present day – with styling that draws heavily on the original, complemented by modern, premium touches such as USD forks, twin rear shocks, LCD instruments, IMU-based ABS and full LED lighting. Not bad. 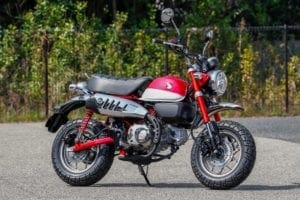 First off, let’s address the modern Monkey’s styling. Personally, I reckon it looks brilliant – and after catching sight of it at the big bike shows towards the tail end of last year, I genuinely couldn’t wait to ride one. Admittedly, I’ve always wanted to have a go on a Monkey – ever since I was a little nipper, tearing around my parents garden on a little Puch 50 scrambler – but sadly, I’ve not yet had the chance. Until now.

Of course, the new Monkey’s a long way from the original 1961 machine – and to be honest, it’s even a hell of a leap from the last production Monkey which was released in 2009. It’s no longer a toy or a novelty – and it’s much bigger than you remember. It’s a proper bike, along the lines of Honda’s hugely successful MSX125 (or Grom). As you’d hope and expect, Honda has worked hard to ensure the styling stays true to the original Monkey, despite its increase in size – and it’s done a hell of a job. 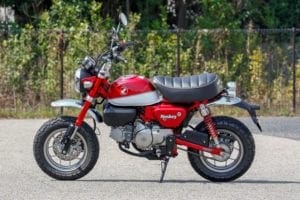 Out on the road, the little Monkey is equally impressive. It’s powered by Honda’s tried and tested horizontal SOHC 125cc single-cylinder engine – the same as the Grom. It’s a peach of an engine – simple, robust and tuned to deliver useful about-town performance, kicking out 6.9kW of power at 7,000rpm and 11Nm of torque at 5,250rpm. In practice, it’s perfect for bombing around town – with plenty of beans to help you get the jump on traffic, and enough grunt to let you sit with traffic up to around 50mph. It might do more – but we simply didn’t get a chance to stretch its legs beyond the ring roads of London, and discover its true top speed.

It’s fitted with a 4-speed gearbox, which I found smooth and assured – and the ratio is spot on for round town too. In fact, for the vast majority of the commute across London I stuck to first and second as we nipped in and out of traffic, and made steady progress through the swathes of traffic due to the nimble Monkey’s miniature dimensions, and thoroughly agile nature. 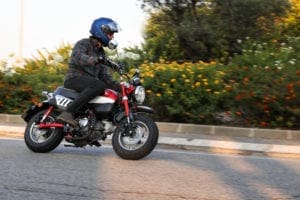 For braking, the Monkey comes with a fairly basic single 220mm front disc and a 190mm single rear disc. Don’t worry though – they’re well up to the job, with the help of its IMU-based ABS system. On the trek across London, a couple of chances to put the brakes through their paces presented themselves – and in a couple of hairy situations they handled my hard braking admirably and pulled me up without too much trouble. As I said, the brakes are basic – but the actual machine weighs so little that they don’t need to be as sophisticated as they would be on a bike twice its size and weight.

Suspension comes in the form of USD front forks up front, and a twin-shock setup at the rear. In practice, it helps to soften the bumps and lumps on sketchy surfaces while offering an extremely comfortable ride. As you’d expect, it’s not especially refined, or performance focused – but it helps to deliver (probably) one of the most comfortable rides I’ve ever experienced. Talking about comfort, I was surprised to find out just how happy I was in the saddle on the compact little machine. I’m just a shade over 6ft, with spindly pins and big feet – but the Monkey looked after me well, and after a good 5-6 hours exploring London I had no aches and pains whatsoever. That’s impressive. 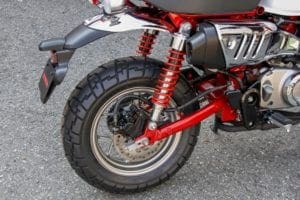 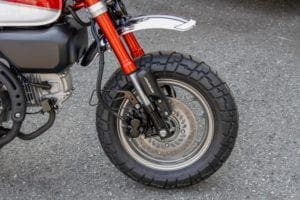 Another highlight of the Monkey is its fuel efficiency. One full tank should hold enough for close to 220 miles of riding – which translates to close to almost 190mpg. That’s bloody good. We left Ace Café at about 9 in the morning with a full tank, and rode across London (with a couple of stops) until 4pm and the fuel gauge had barely moved.

Priced at £3,699 – I think the Monkey’s good value for money too. Sure, it’s £310 more than Honda’s MSX125, but I also think it’s much cooler. And anyone out there moaning that it’s a fortune compared to the original Monkey needs to remember that the latest incarnation is a different beast entirely. It’s a modern, fully functional motorcycle, packed with the latest technology. 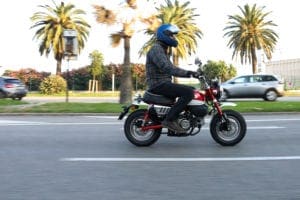 In essence, I love the new Honda Monkey. I was a fan when I first saw it – and after spending a full day in London (and an evening in Nice) putting the stylish little urban commuter through its paces, I think I’m in love. It’s not for everyone, granted – but it’s refined, capable and very comfortable, and if you were doing a lot of close quarters riding in towns and cities, I don’t really know why you’d want anything else. If I lived in London – and needed to commute round the city, I’d have one in a heartbeat.