It’s quite rare to have a launch test in the UK these days. Most manufacturers opt for the near-guaranteed sun and twisty roads of southern Europe, but BMW UK took a chance on the weather and organised the first ride of the new R nineT Urban G/S in Northampton. Not a bad shout as it turned out: the sun was shining, and just as I arrived at our starting point, the Aviator Hotel next to the Sywell Aerodrome, a Spitfire took off from the runway, its V12 Rolls-Royce Merlin engine tearing the sky apart. Not a bad start to a day! 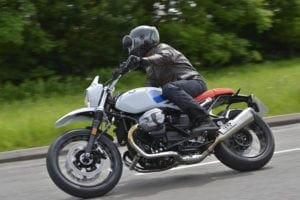 There are two versions of the Urban G/S available in the UK, the base model (£10,550) and the X version (£11,185), which gains a chrome exhaust, spoked wheels, heated grips and LED indicators.

Our test bike was the X model, the one with all the trimmings, and seeing the bike in the flesh, the first impressions were very positive. The large boxer engine adds instant character, while the tall seat (850mm), high bars and raised front mudguard, combined with a 19in front wheel, tall suspension (125mm travel at the front, 140mm at the back) and decent ground clearing make it look able and purposeful. The Dakar styling, spoked wheels and adventure heritage point strongly to the GS family of go-anywhere bikes rather than the R nineT roadsters, but our bikes weren’t equipped with knobbly tyres, so we were bound to the Tarmac roads. 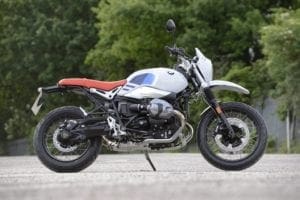 Starting the engine results in a gentle left-right-left series of punches from the boxer-twin, and adding revs makes the bike lean slightly to the right. It may be a modern bike but it’s not lost the engine characteristics of the classic configuration.

Moving off, the Urban G/S is instantly easy to get on with, simply because there’s not much to not get on with. No engine modes, traction control setting or fancy display settings. The only additions to the usual horn, indicators, lights and start buttons are the trip selector and the ability to switch the ABS off. The dash is equally spartan, with just a single clock housing an analogue speedo and digital trips, odometer, engine temperature and clock. The lack of a tachometer takes a little while to get used to. A couple of times I hit the rev limiter as we are accelerating out of the corners in the Northamptonshire countryside, but riding more sensibly it’s not a problem. 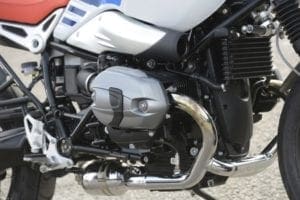 The 1170cc air/oil-cooled two-cylinder boxer engine is well-behaved, delivering a decent amount of nicely linear power. The power figures aren’t mind blowing, with peak power at 108.6bhp (81kW) @ 7750rpm, and torque figures of 85.6ft-lb (116Nm) @ 6000rpm, but that’s enough oomph for a fun, spirited ride on country roads – and more than enough for cities. Of course, with the lack of a rev counter you have to rely on your own judgement to find the sweet spot, but even with the revs low you still have useable power, unless you’re really taking the Mickey and crawling in top gear. There’s no gear indicator, so you’re on your own to work out which gear you’re in, but that’s part of the retro spirit, right?

The gears are slick and slot into place with minimum effort. The only problem I had was that when you push the pedal down to go to first gear, there’s very little feeling as the gear is selected, and a few times I kept stomping on the pedal not sure if I was in gear – as it happens, I was, so it’s just a matter of trusting the six-speed gearbox. 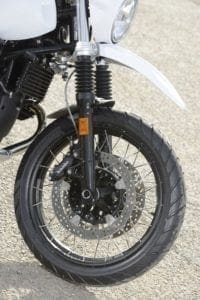 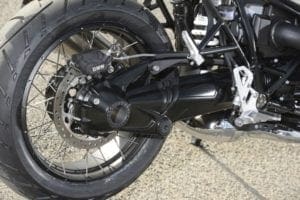 Both the front brake and clutch levers are span-adjustable, which is a nice touch. You don’t always get that even in bikes whose price tag would suggest that top quality components are being used. The levers are also fairly light to operate and the brakes work well with 4-piston fixed calipers gripping 320mm twin discs at the front and floating 2-piston calipers biting into a single 265 disc at the rear. The ABS is BMW’s own BMW Motorrad ABS system, which works fine if you slam the brakes on with enough force to lock the wheel.

Flying on the fine English B-roads, the bike handles well: the 19in front wheel adds stability, the throttle response is crisp and speed builds up quickly. Overtakes are easy, and the suspension is a pleasant surprise. I say a surprise because the forks are unadjustable, while the rear shock allows preload and compression adjustment. I often feel that factory suspension settings need a little tinkering with for a better ride experience, but the R nineT Urban G/S feels great straight out of the box. The longish supension travel helps as the bike glides over the bumpy country roads. If truth be told, I wouldn’t have changed the settings even if that had been an option. 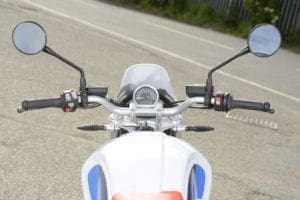 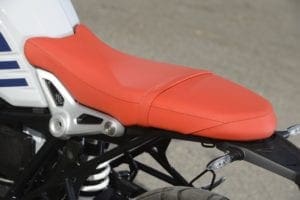 The riding position is a fraction forward leaning from neutral, but with the tall and wide bars and nice big foot pegs, you feel perfectly balanced and planted on the bike. The seat, although thin, is comfortable for an hour or two, but for mega miles a comfort seat might be necessary. Then again, this isn’t a bike designed for long-distance riding. It might have the G/S moniker that’s often synonymous with big trips, but this bike is all about the fun of riding, not distance – and it does fun well.

If the ease of handling and the lively engine alone aren’t enough, the sound from the two-into-one exhaust is sure to bring a smile to anyone’s face. The rich, deep, throaty roar is enough for me to slow down and then accelerate again for no reason other than to hear the engine growl. Getting rid of the baffler would be very simple by just removing a few screws and pulling it out, but I manage to control myself and refrain from doing so – imagine what it would sound like though. 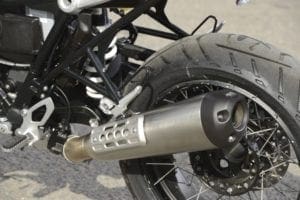 The Urban G/S is a roadster for the sunny days, so there’s very little weather protection. The small headlamp mask has a bit of a lip on it, but the effect is mainly visual. However, on a warm sunny day, feeling the wind resistance push you back in your seat as you squeeze the throttle is part of the fun. And that’s what this bike is all about – fun! It’s a bit like that Spitfire I saw take off: it’s not got the gadgets and electronic marvels of modern machines but it’s bags of fun, and oh boy does it sound good! 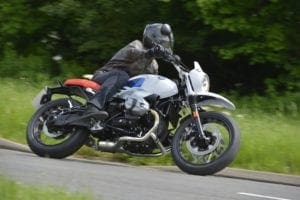