Here’s our in-helmet video review of the 2017 Triumph Street Triple 765. We’ve made it in one-hit, no editing, so that you can see what we really think of this bike during the first chunk of miles on the new Hinckley metal.

It’s been ten years since the launch of the original Street Triple and since then the bike has gone through a few changes, but nothing as dramatic as what’s happened to the line up in order to produce these models.

We’ve been riding the bikes out in Spain and have bagged some serious miles at serious speeds over pretty serious types of roads already. And if you play the video above, you’ll see how we rate and reckon on the new motorcycles from the big Brit brand.

There are three bikes in the range, the Street Triple S, Street Triple R and Street Triple RS – the factory must be pretty pleased with them because before today’s world launch first ride in our sticky mitts the factory promo bumph said that these bikes are: “the most explosive, exhilarating, agile and intuitive performance street motorcycles the brand has ever made.”

They all share the same new 765cc triple engine, developed from the ‘Daytona’ engine. There are more than 80 new parts including new crank, pistons and Nikasil plated aluminium barrels and an increased bore and stroke (78 x 53.4mm). According to Triumph, the result is a significant advance in performance, particularly low-down and in the mid-range.

Although the engine is shared across the range, each bike features individual levels of power and torque through their own unique engine set-up, ECU and tune. In addition, the suspension, electronics, and even tyres are tailored for each bike.

Despite increasing the engine displacement from 675cc to 765cc, at 166kg the new bikes are 2kg lighter than the current models, delivering a much-improved power to weight ratio and performance.

Triumph also assures us that the revised gearbox geometry and shorter 1st and 2nd gear ratios combine to deliver stronger than ever acceleration and slicker gear changes. 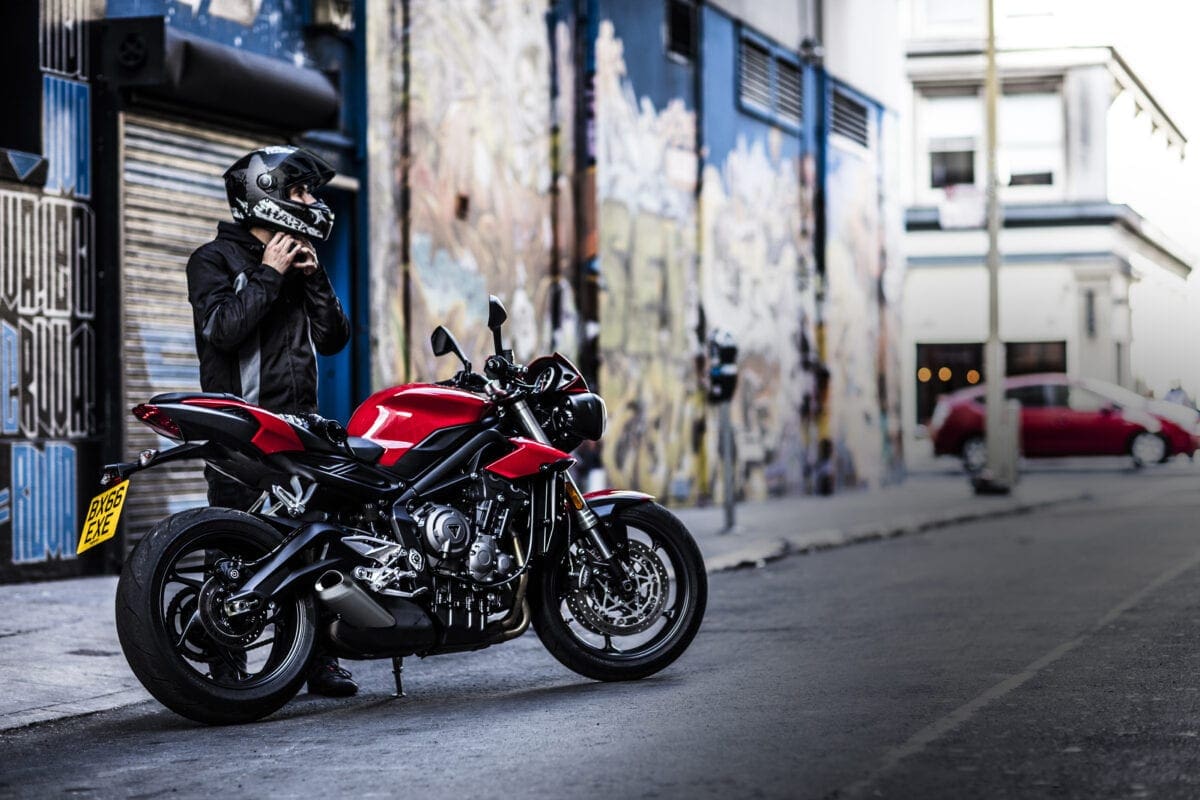 To round up the upgrades, there are higher spec brakes (with ABS), Pirelli Diablo Rosso Corsa tyres, and Showa suspension (preload adjustable at rear). The new model also weighs less and features an all-new gullwing swingarm. Colour options for the ‘S’ are red or black. 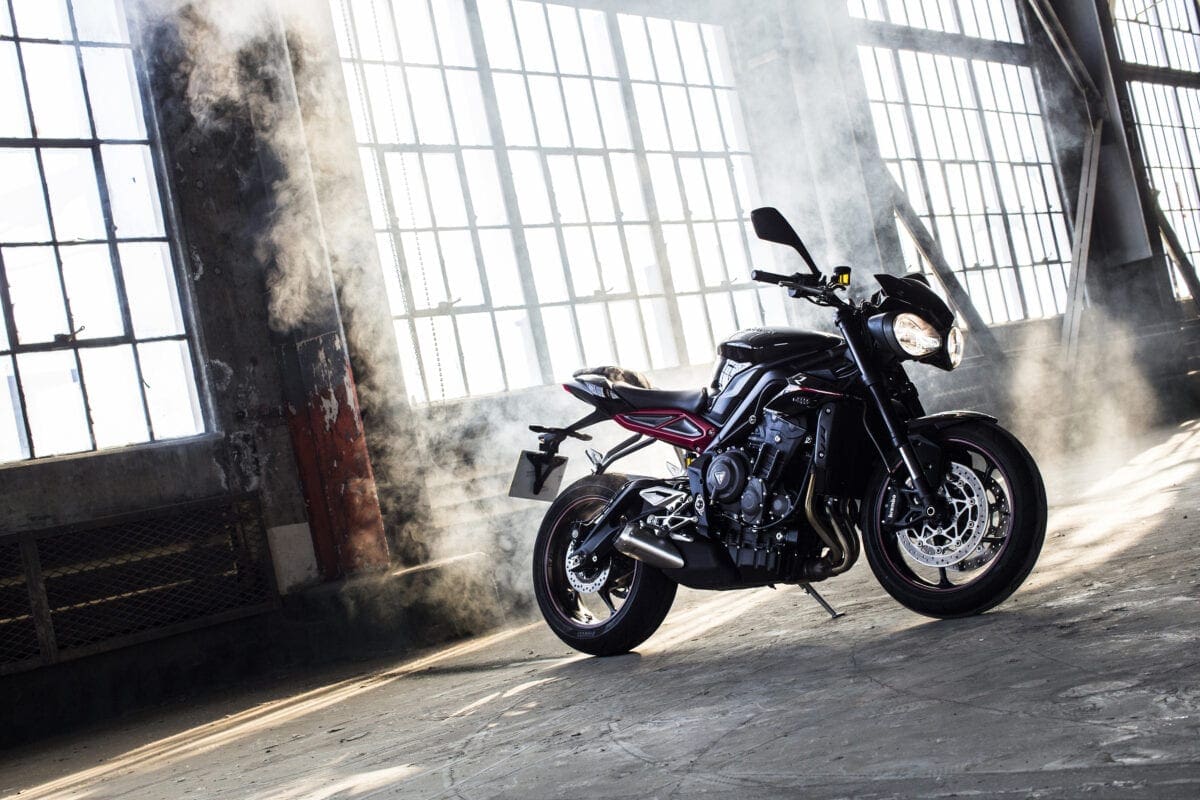 Taking the performance, specification and finish to a higher level, the ‘R’ is set up for more refined road riding. The ‘R’ tune, with its own model-specific crank shaft, increases peak power to 116bhp at 12,000rpm, and delivers peak torque of 77Nm at 9,400rpm. 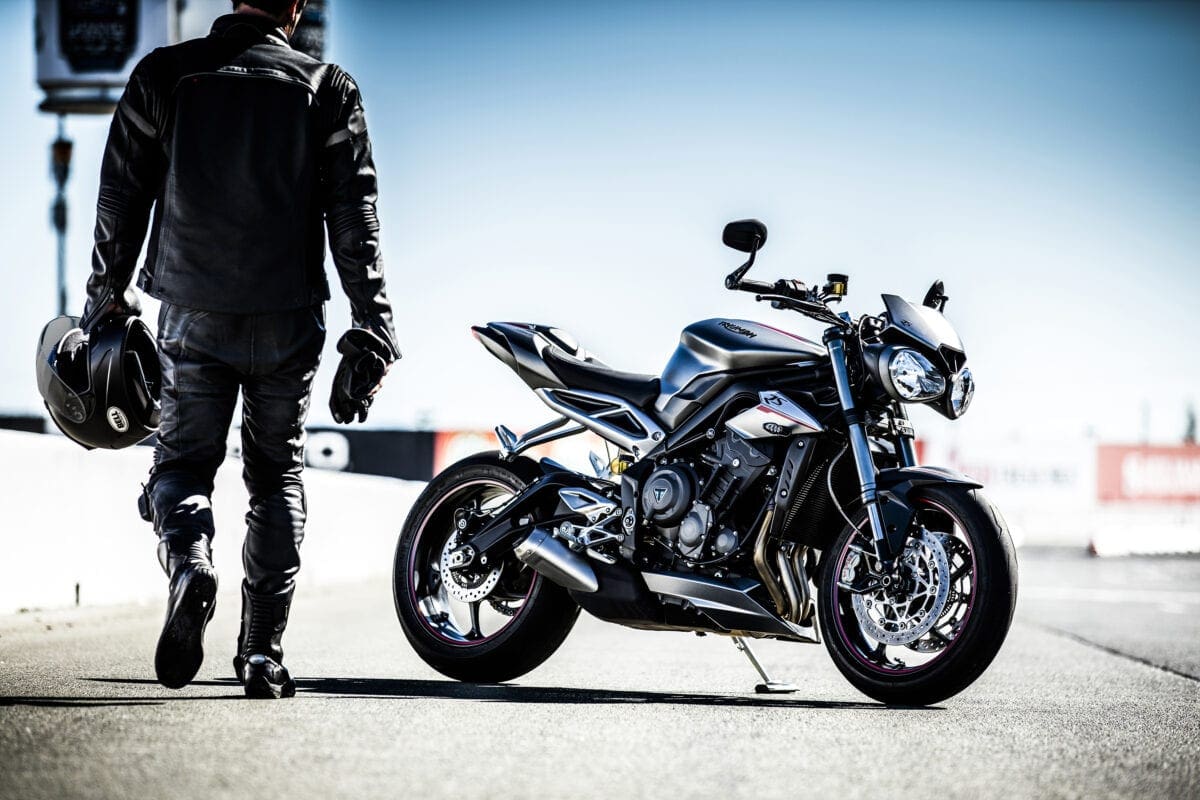 The ‘RS’ is the top of the range Street Triple, built to be at home on the track, as well as on the road. The ‘RS’ tune delivers the highest level of performance ever for a Street Triple, with a power increase of up to 16% over the previous model, delivering 121bhp at 11,700rpm and a peak torque increase of 13%, providing 77Nm at 10,800rpm. 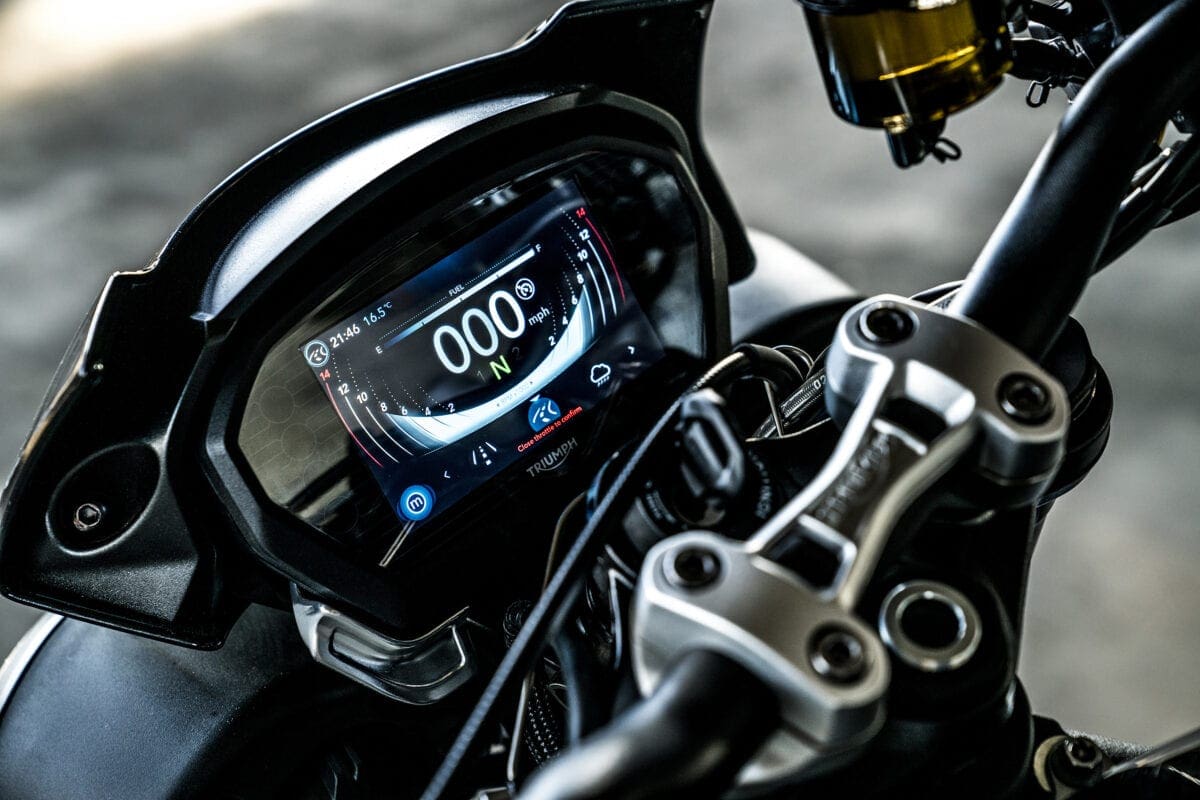 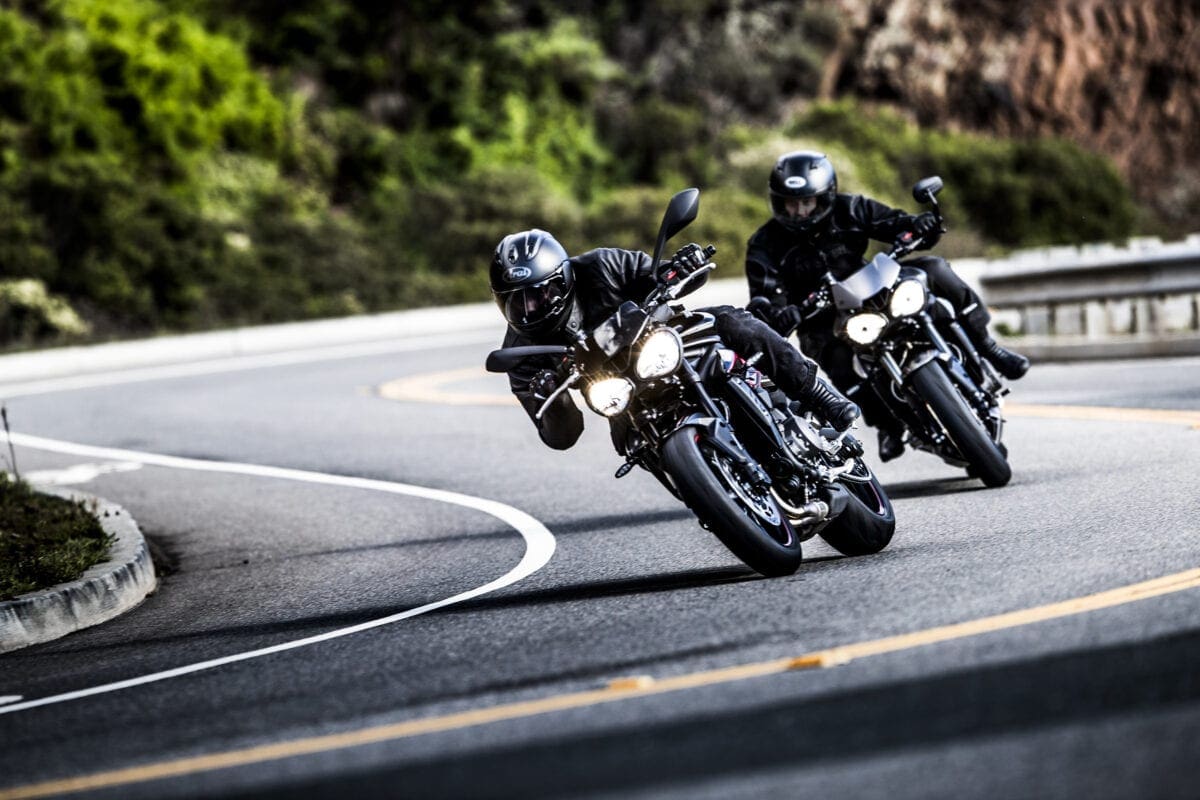 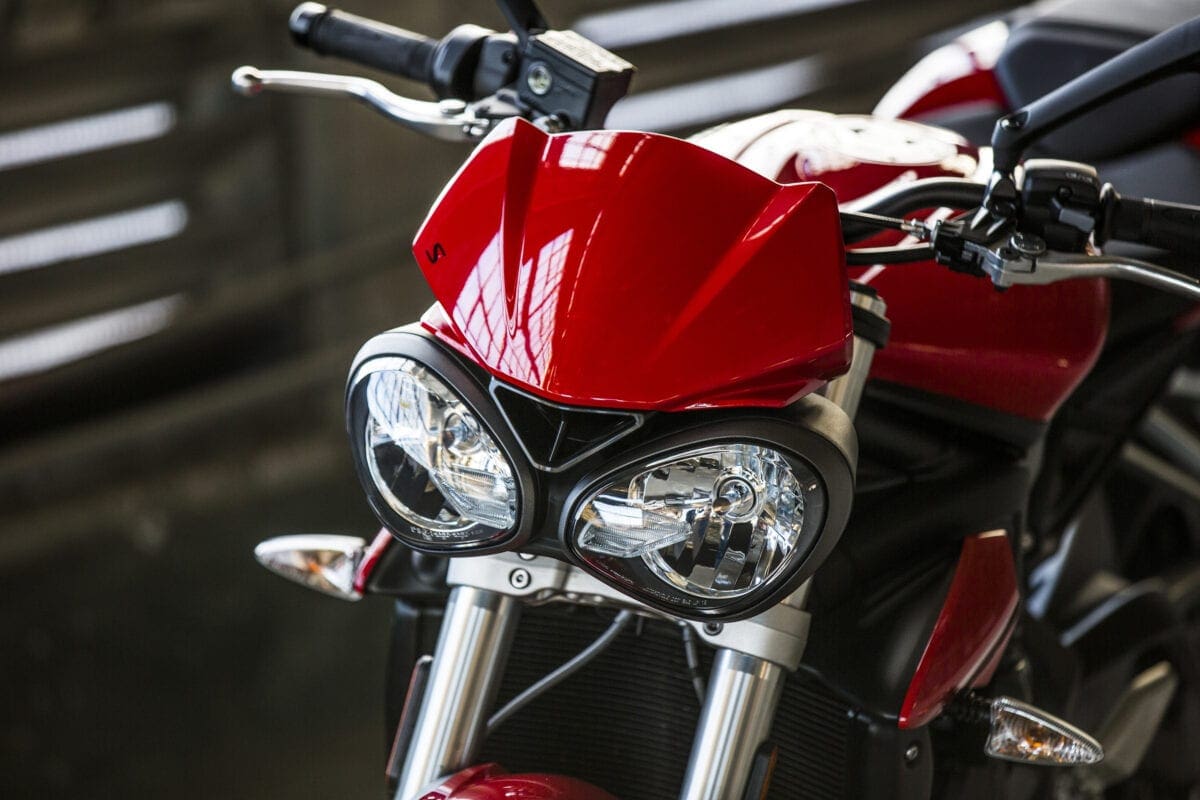 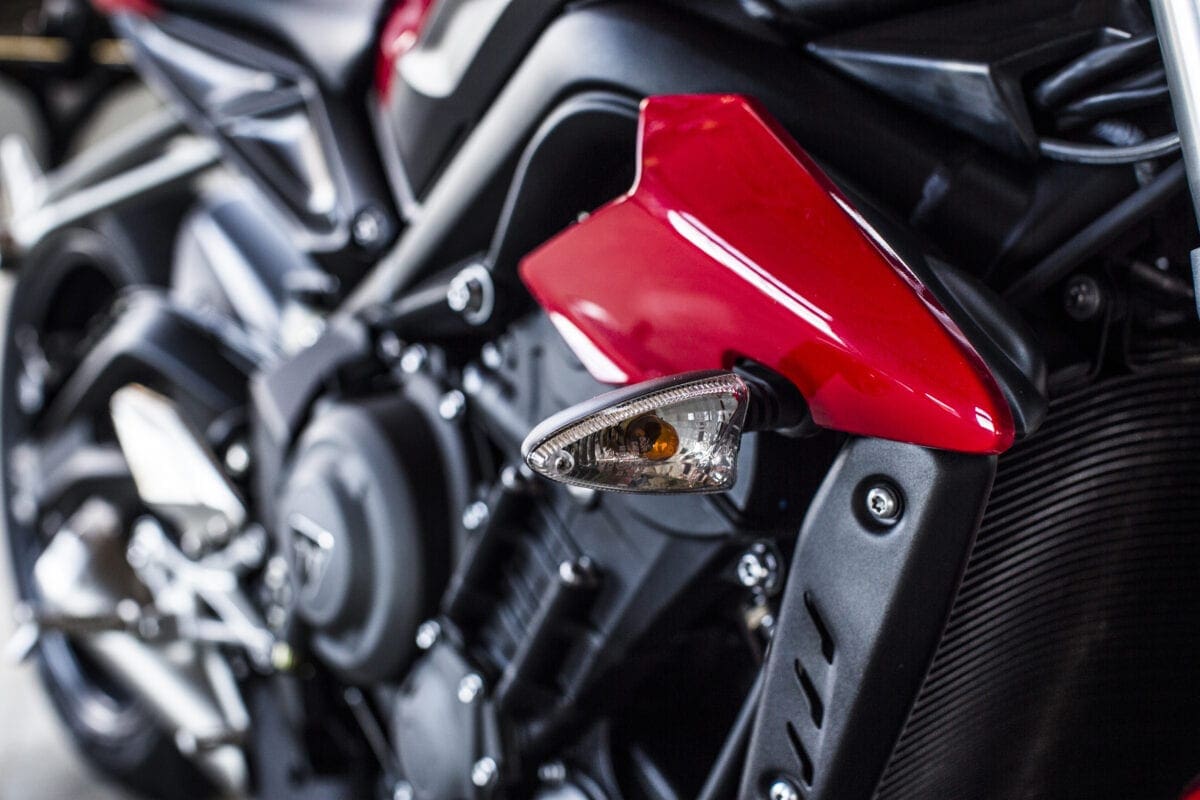 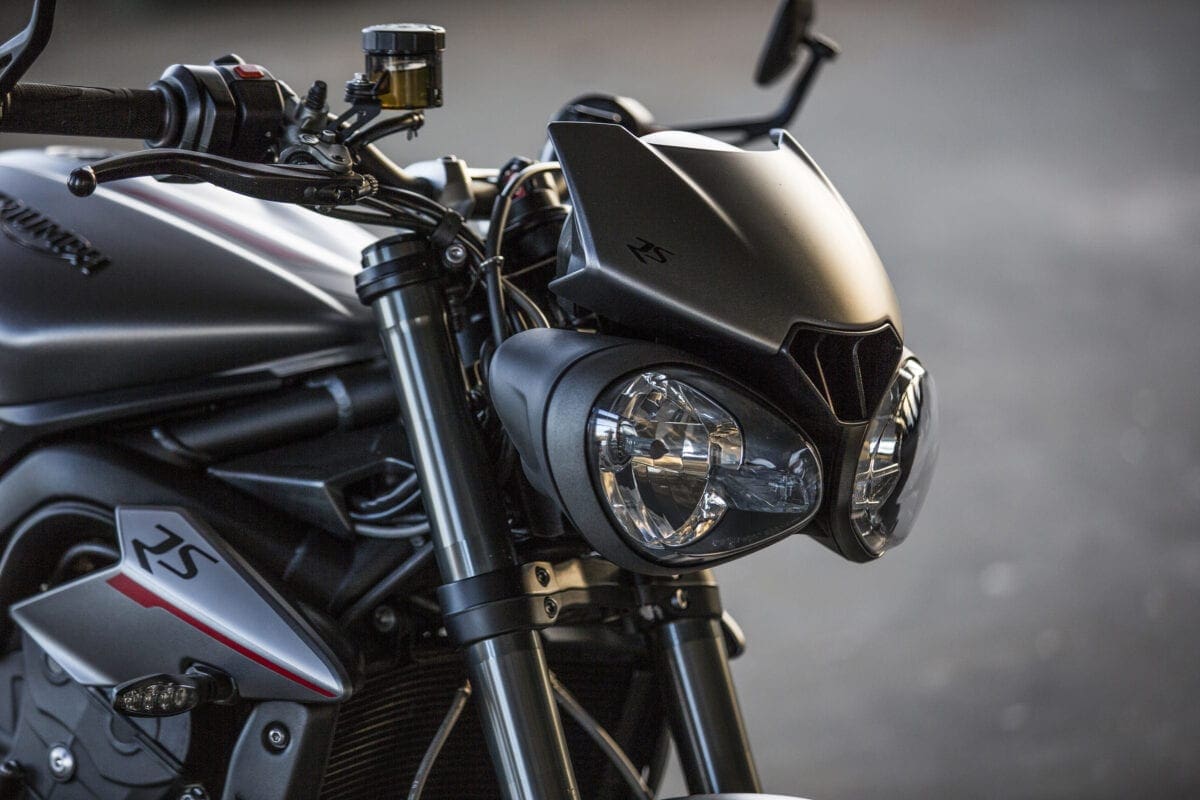 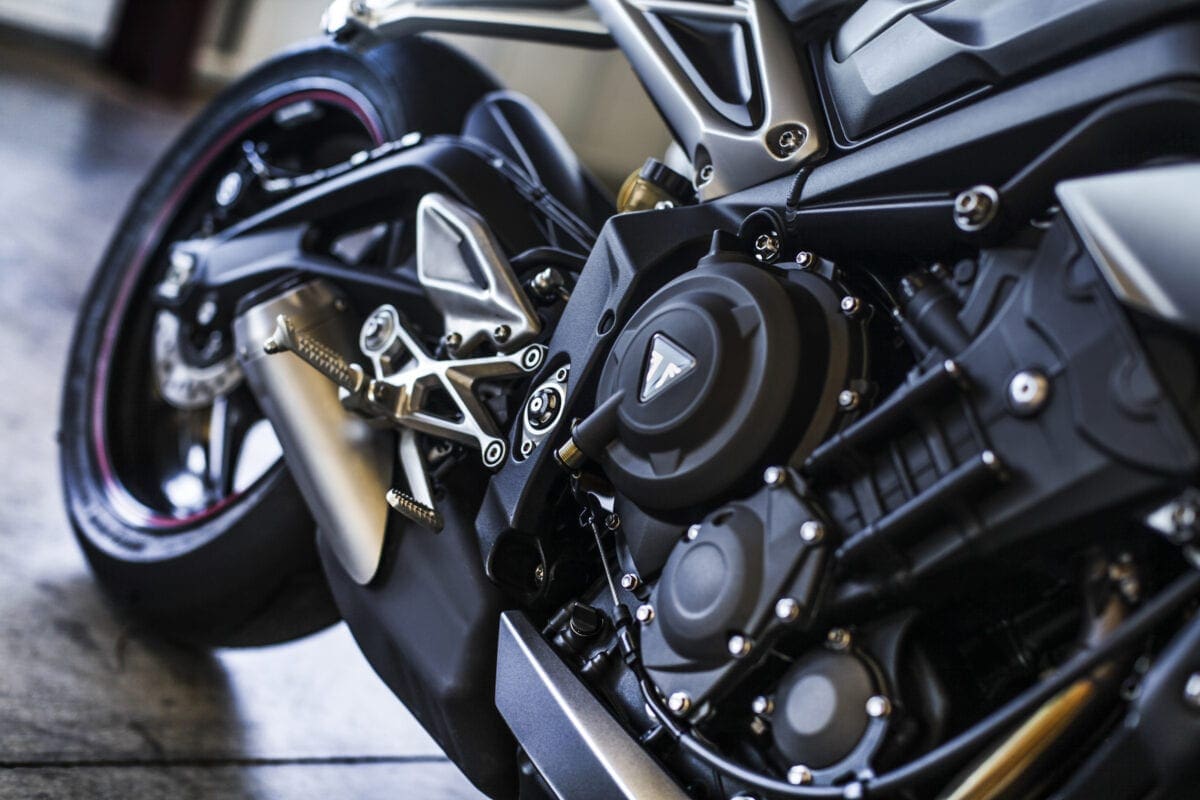 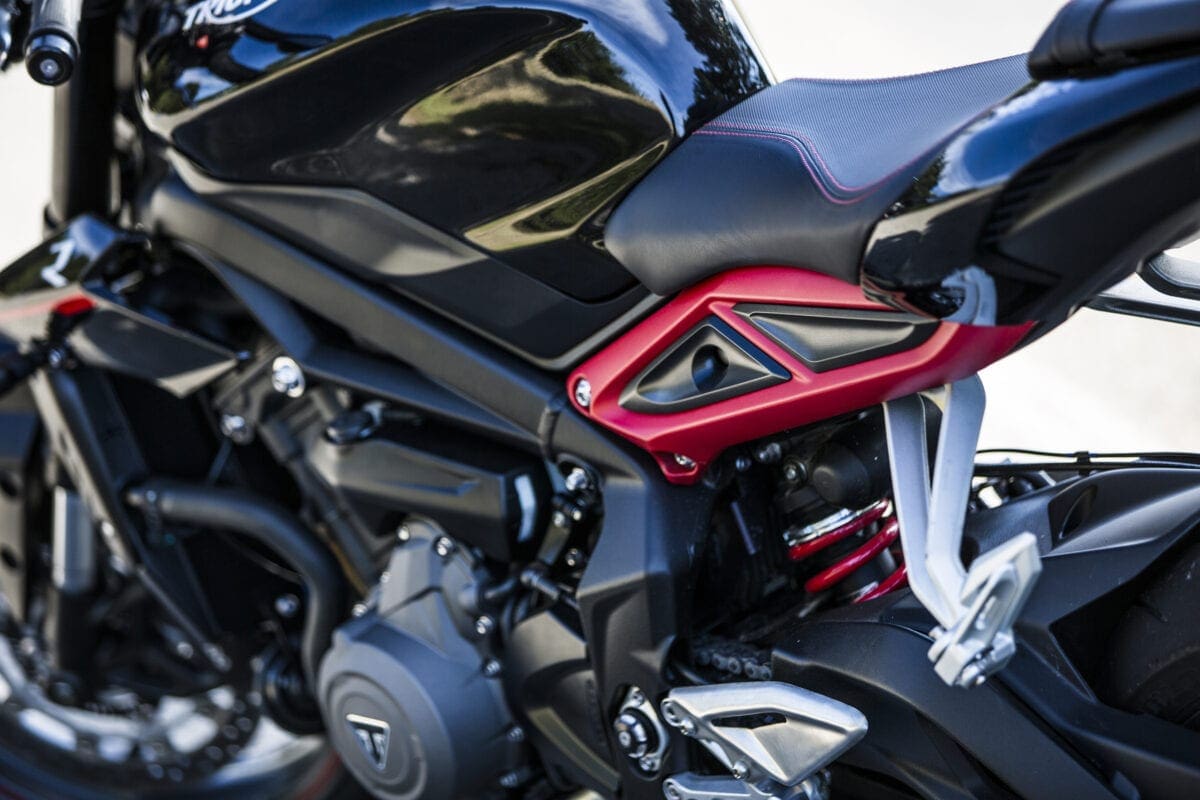 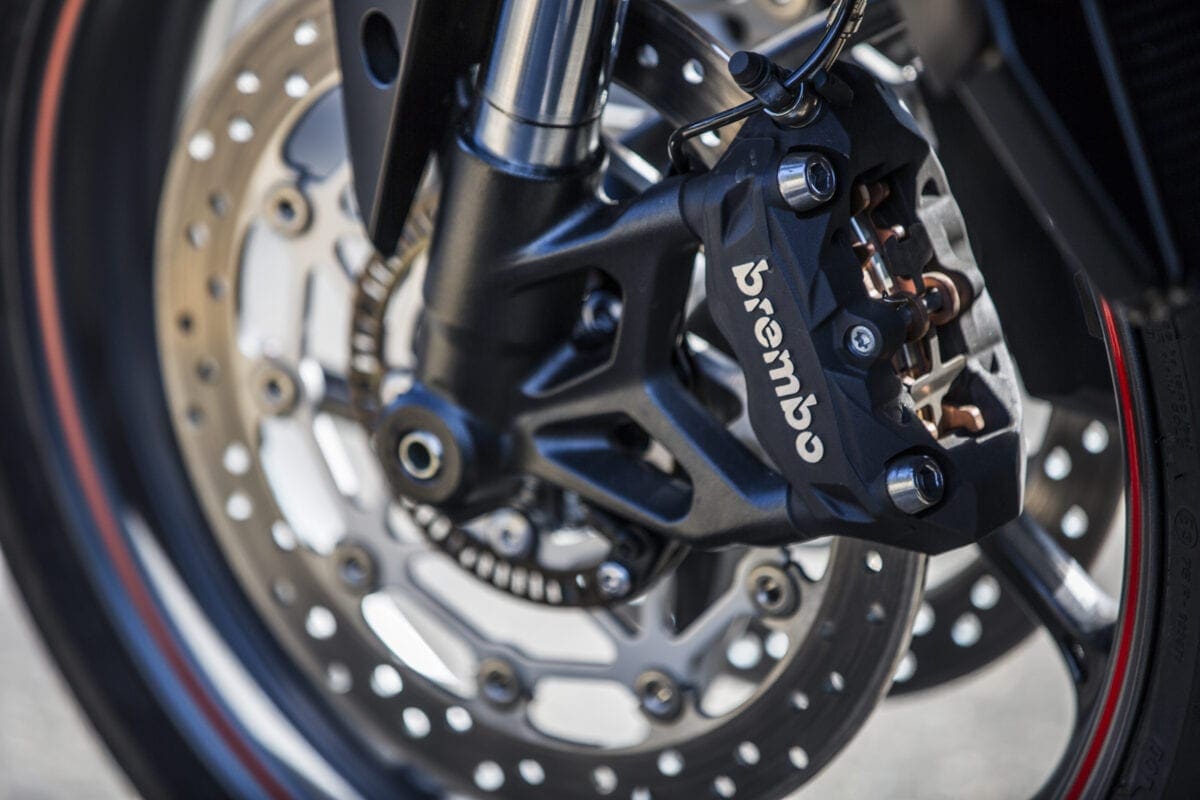 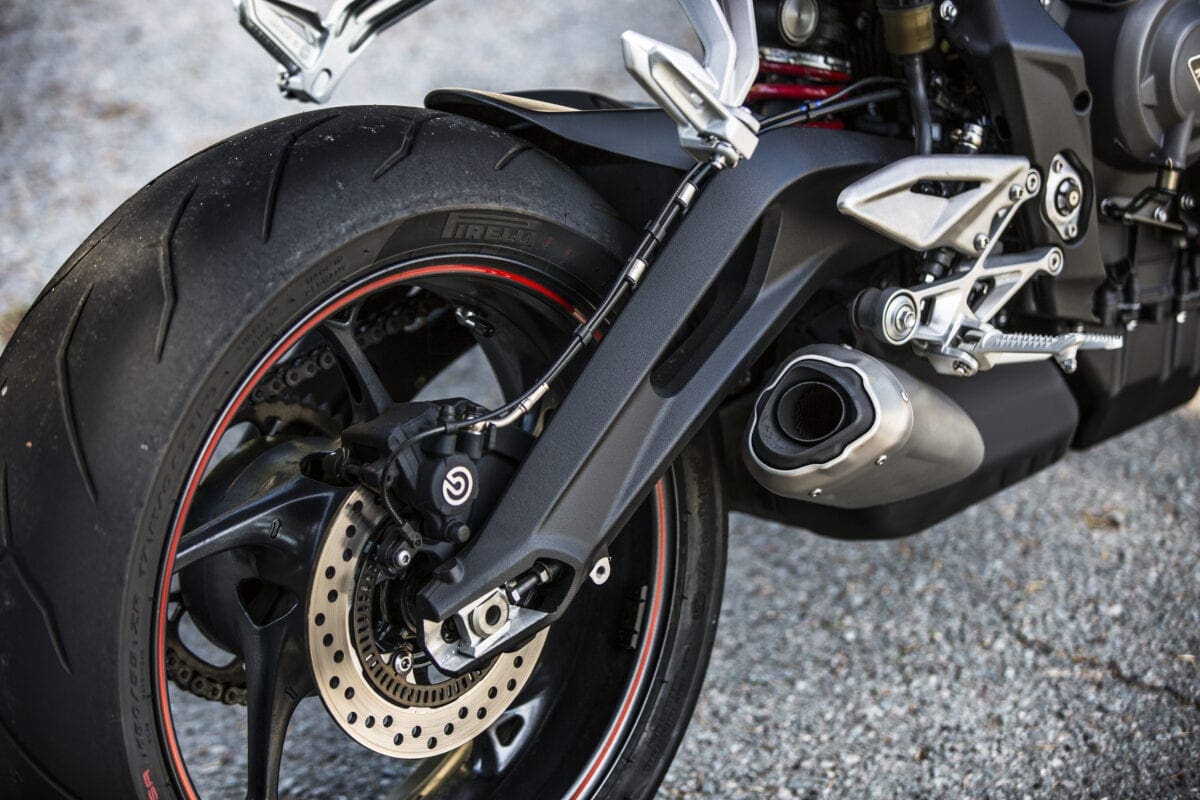 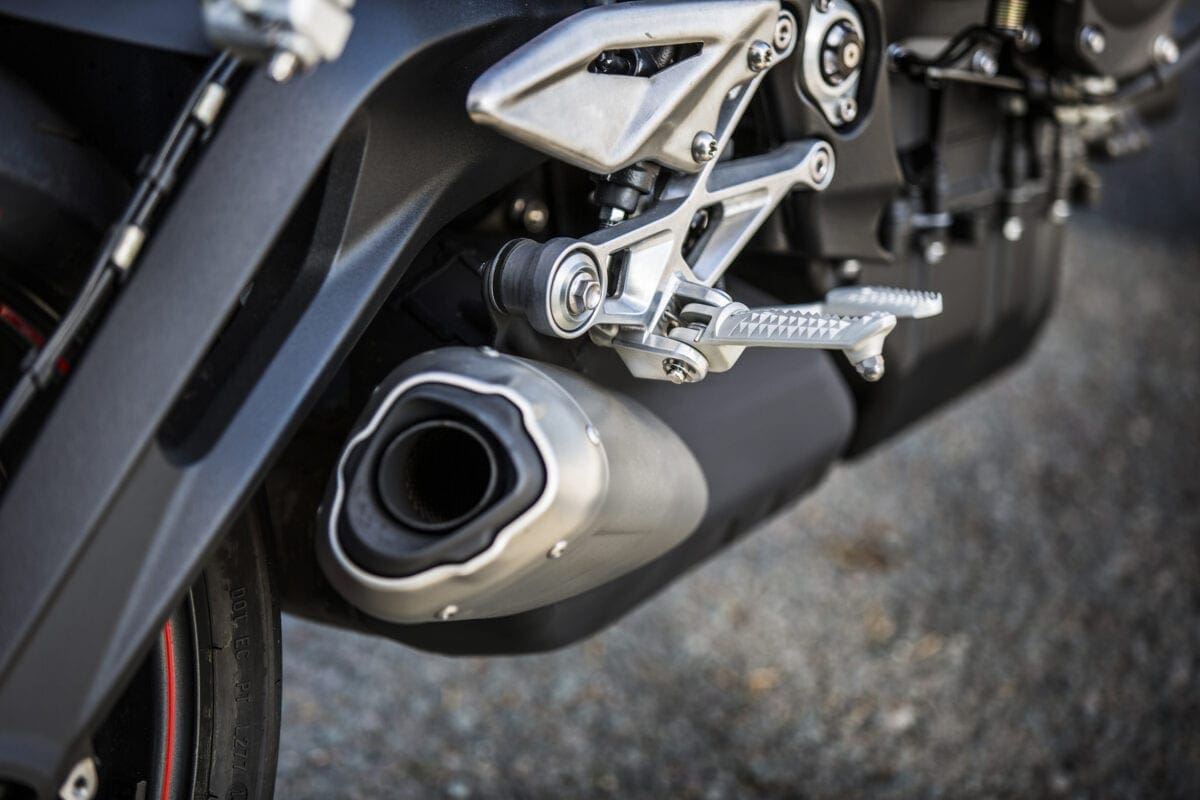 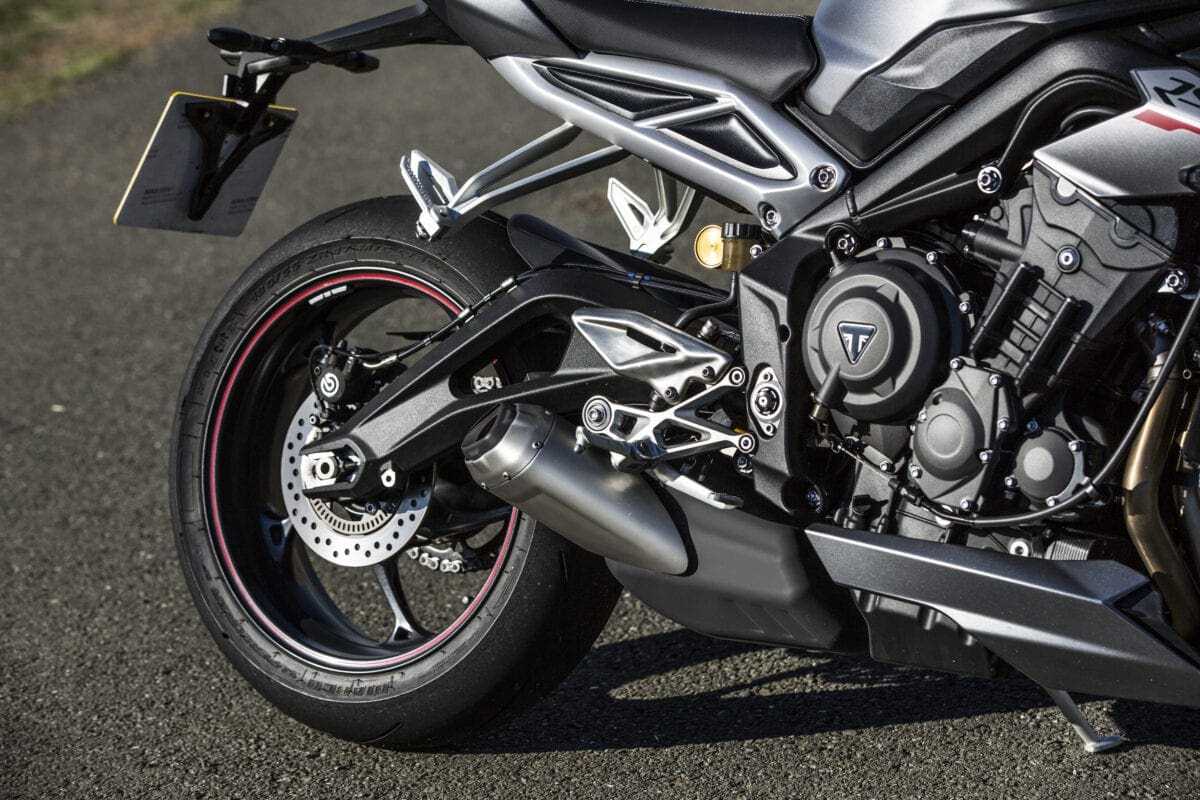 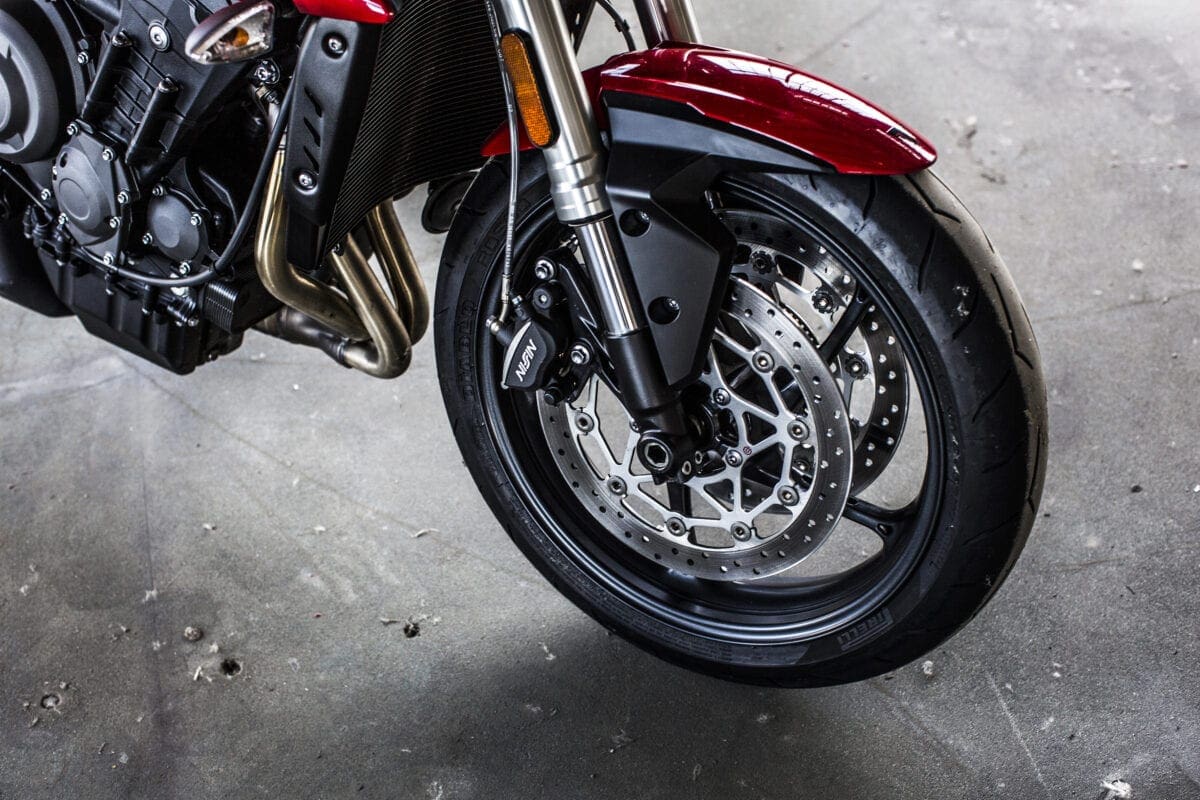