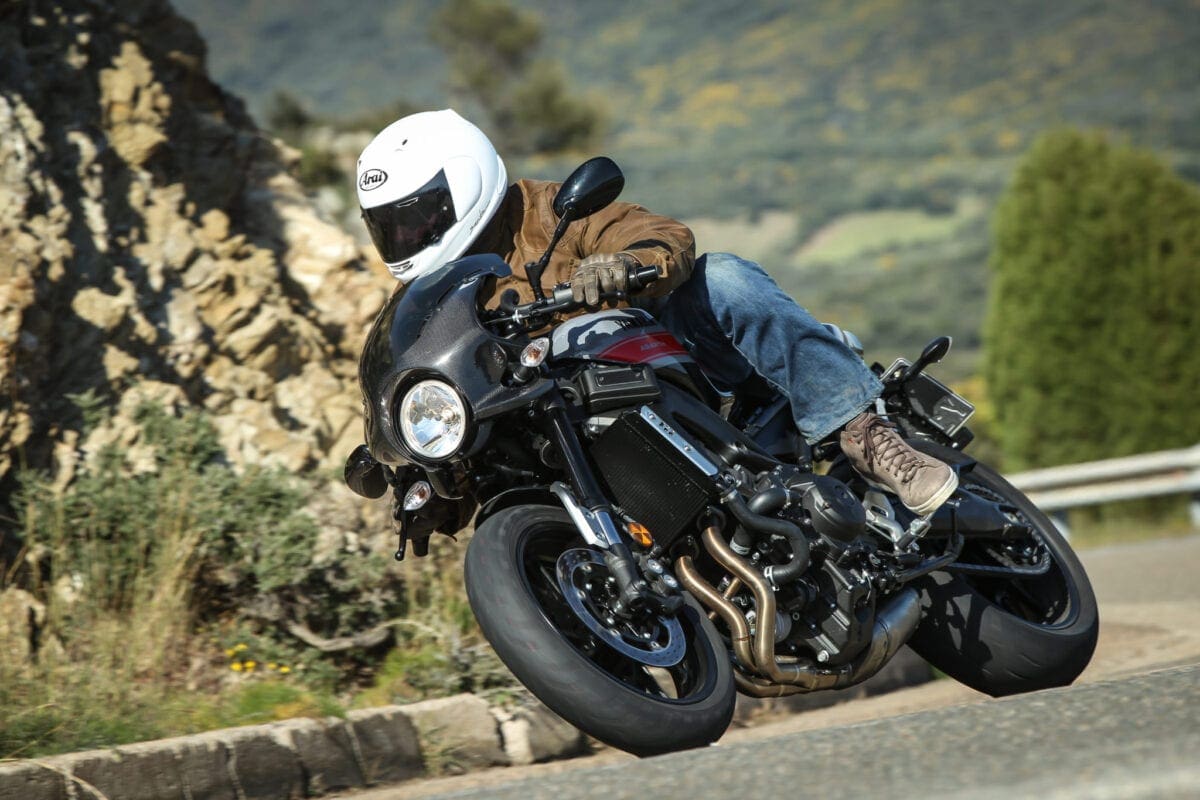 “This’d be fantastic around Cadwell,” exclaimed one journo as he jumped off the XSR900 Abarth. He’s right, but it’s a shame I found it so uncomfortable on the tight twisting roads of Sardinia where we were riding it.

To be fair, I was the only one who didn’t seem enamoured with the limited-edition machine, and I should also say that, for the first 15 minutes at least, I thought the extreme riding position bought on by the ‘swallow tail’, or ‘Ace’ bars, perfectly suited it. I understood why 100 pre-orders were taken in just the first two hours of the online registration system going live in January – while using the well-proven, brilliant chassis and engine of the XSR900/MT-09, this is something very special indeed. 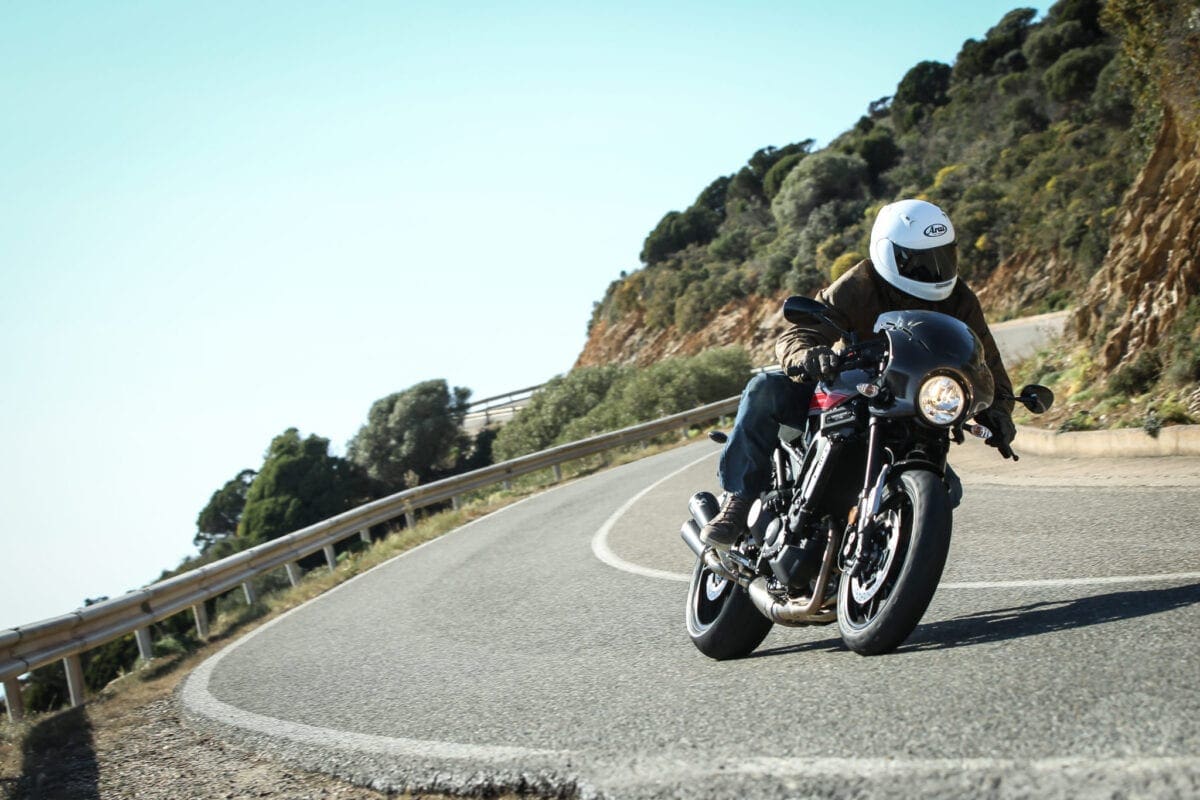 But after those 15 minutes, when I’d lost the feeling in my hands, I started to realise that I really wasn’t among the target audience. I’m 5’10”, 44 years old, and like a bit of comfort in my bikes. I’m not a committed enough rider for something so bum-up, wrists-down, and while the higher speed sections proved I would have had more fun on it if we’d been on track, I couldn’t help thinking that the last bike I rode on a high-speed circuit – Honda’s 2017 Fireblade – would have been more comfortable than this out here.

Yamaha’s not daft though – the company is well aware that this bike isn’t for everyone – and with only 695 being built, they know that they can afford to do something a little more off the wall. 40-50 were pre-ordered in the UK, which is the highest percentage of any country (it’s only for sale in Europe). Only 50-60 more will be brought onto our island for dealers to sell from April, and it looks likely that they’ll disappear very quickly.

The original plan was to offer 95 as pre-orders, with those customers given an invite to the Abarth factory, as well as a country-specific special event that will include driving the Fiat 500 XSR Abarth (in the UK, this will be at Rockingham). So many orders came in that this was extended to 145, meaning there are just 550 left for showrooms across Europe. 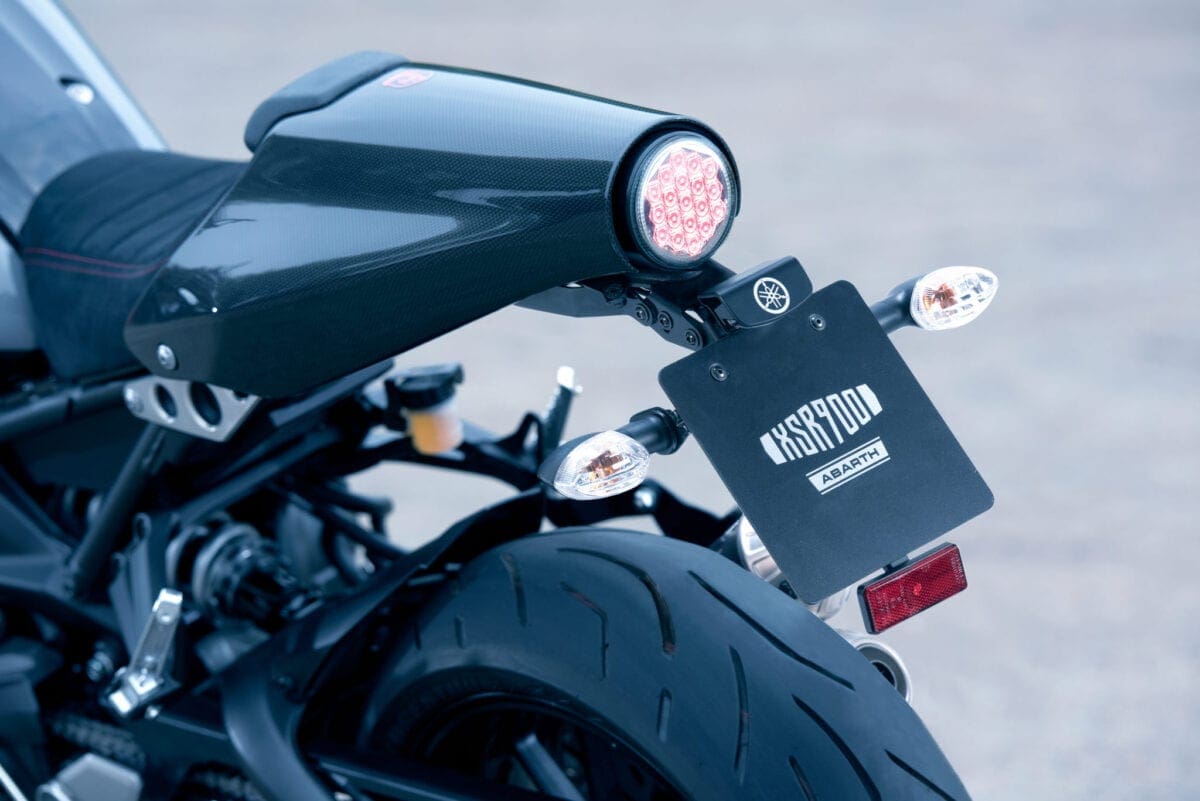 There’s no denying that this is a stunning machine. The café-racer-style carbon-fibre fairing (a modified version of that on the XJR1300 Racer) wraps neatly around the headlight, with the traditional ‘Ace’ bars – similar to inverted cow-horns), plummeting down the forks, above a stubby carbon fender. 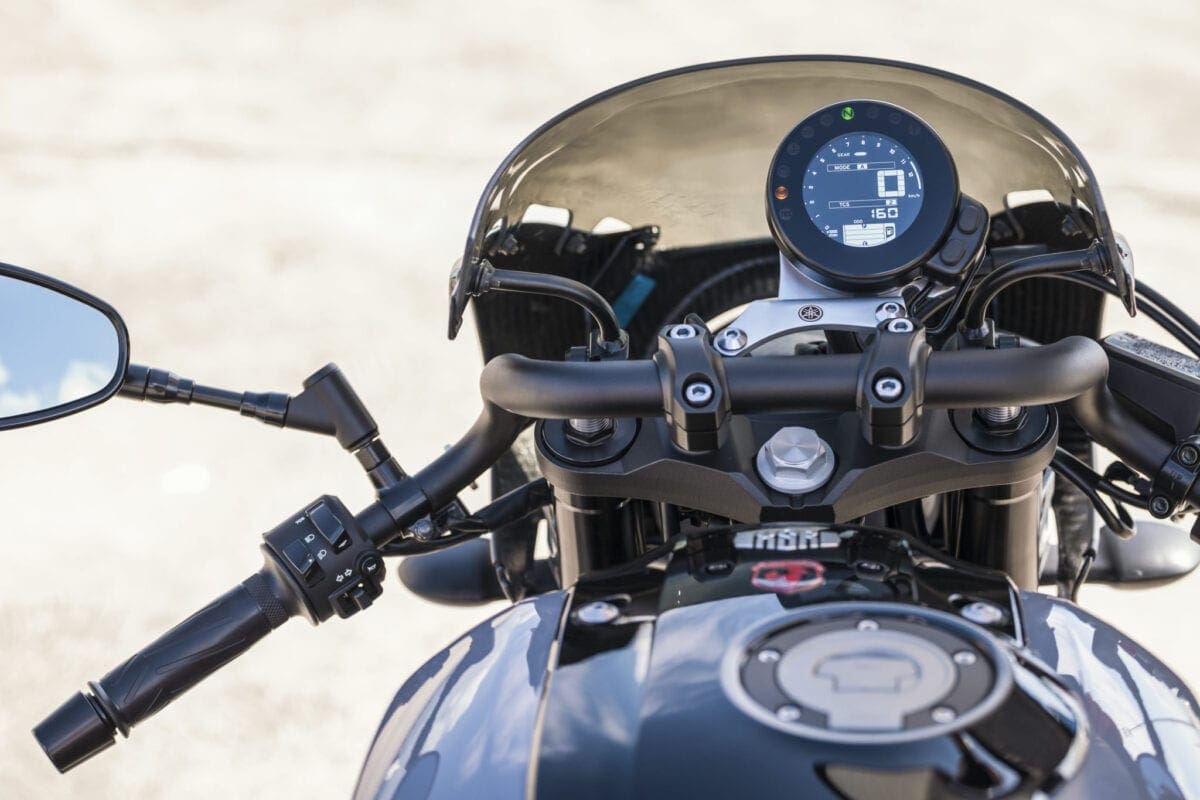 The clock looks something of an after-thought, and I wonder why this wasn’t tucked down into the fairing, but the negative display looks great, before your eyes skate over the red and black paintwork, the scorpion insignia of Abarth, and the laser-engraved numbered panel, to the beautiful carbon-fibre tail-piece. While the aluminium number-plate and indicator hanger’s many bolts are a little untidy, the sweeping lines of the removable pillion-seat cover are one of the best pieces of design seen on a bike for a very long time. Yamaha is adamant that this part is exclusive to the Abarth, and will only be available as a spare to owners of the bike. The individual numbers will be tracked, at least while the machines are with their first owners, so no option for XSR900 owners yet… 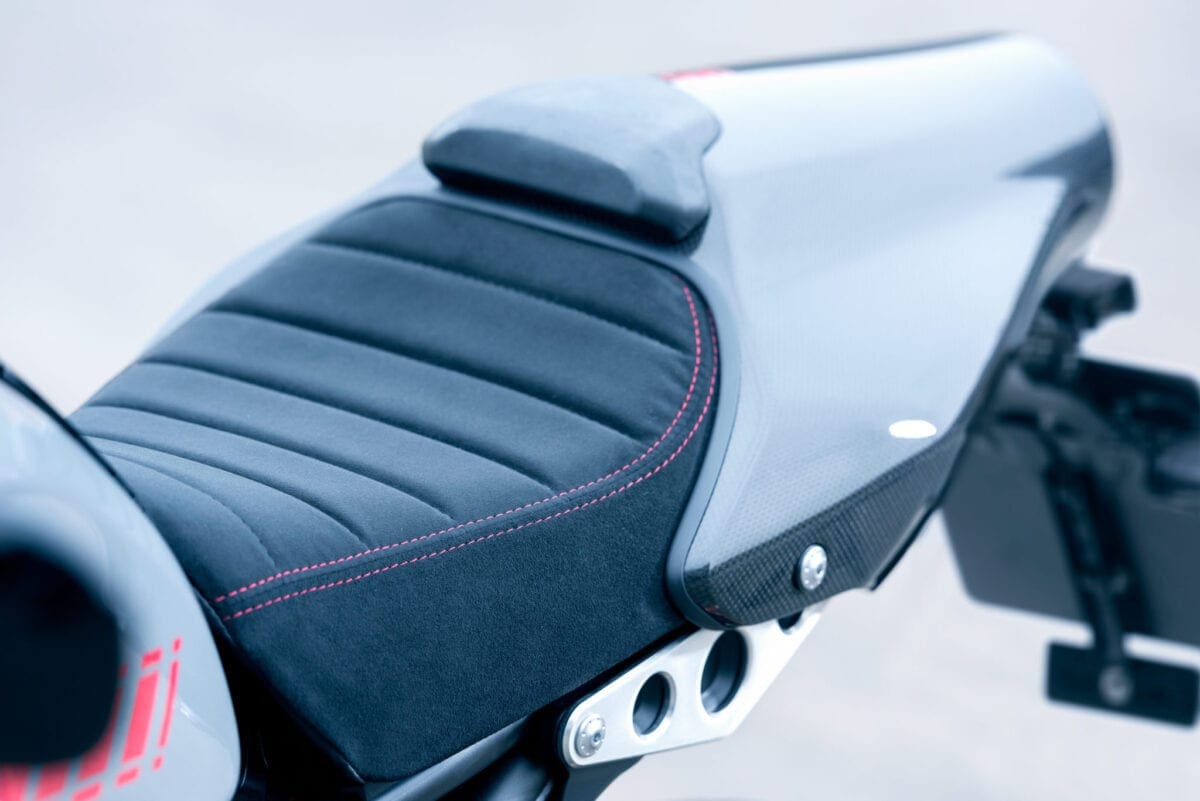 The seat is covered with a wonderful ‘Ultra Suede’ material over a waterproof membrane, and below this is the stainless steel and titanium Akrapovič exhaust system. All in, the £1700 premium over the XSR900 seems easily justified. The only real surprise is the lack of a quick-shifter; standard on the MT-09 models, it’s not fitted to the XSR900, but it would have made sense on a machine with the Abarth badge. That sub-£10,000 price point was obviously pretty important…

The Abarth is a dealer-fit kit that’s expected to sell to ‘experienced riders between 35 and 50 years old, looking for a truly unique bike’. While many of the parts are already in the Yamaha catalogue, and they’re fitted to a justifiably popular base machine, this is certainly something that will attract attention.

The exhaust isn’t drastically louder than the standard system, but it is a little more fruity (and the catalytic converter is removable if you’re naughty enough to ignore homologation issues), giving off the odd pleasing pop and bang on down-changes. It doesn’t make any more power, but that’s no surprise given the efficiency with which the triple makes its 114bhp (it feels much more) and 65lb-ft. 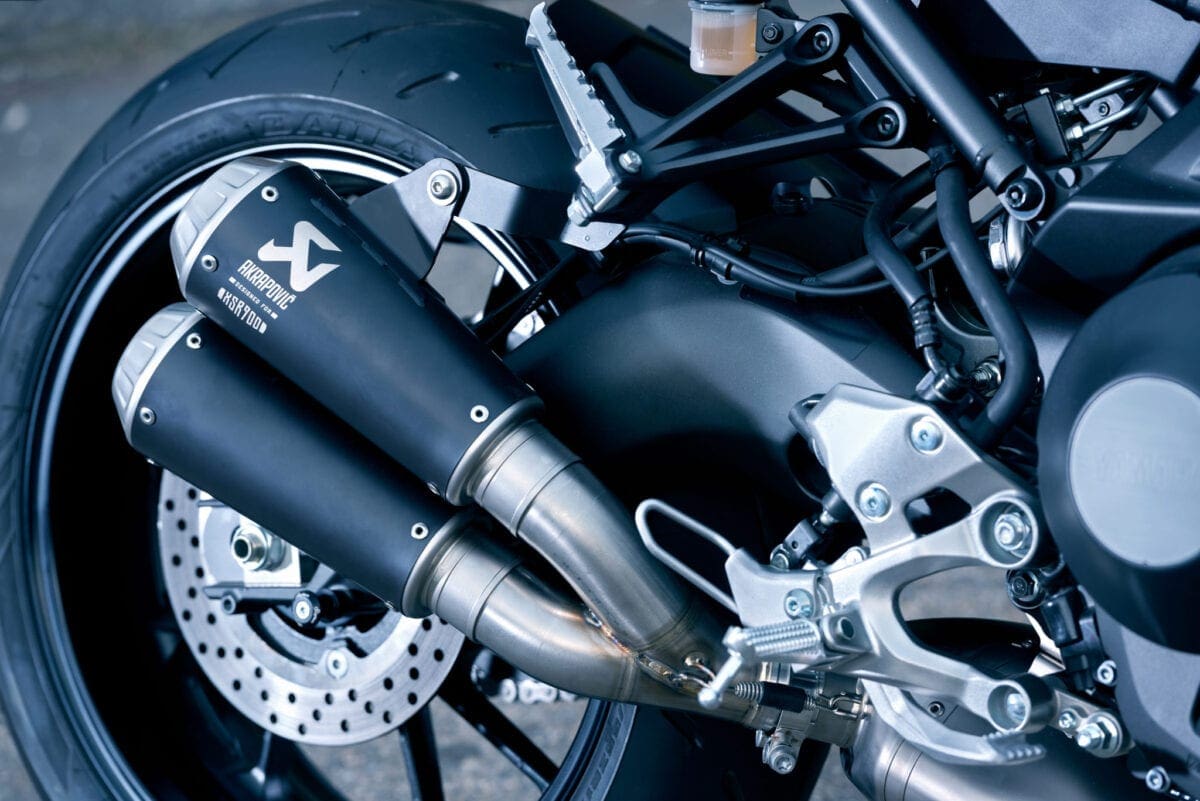 As with the other bikes using this engine, I found the ‘standard’ mode to feel the best, ‘B’ being a softened delivery for wet roads, and ‘A’ just too sharp. All three have the same peak, but it’s surprising how different the throttle response can feel.

The suspension is unchanged from the XSR – adjustable for rebound at the front, and preload and rebound at the rear, it felt compliant and comfortable on the smooth Sardinian roads of the launch. Maybe the suspension felt particularly good because the ergonomics suited me so badly. I’m pretty sure I looked fairly cool – the other riders certainly did – but the only way I could get the weight off my wrists was to slide my bum right back in the seat and grip the tank tightly with my knees. If I was any further forward, the aluminium tank panels’ edges would dig into my legs when trying this.

At higher speeds, things got a lot better, and I was the only one of the nine other journalists not to be raving about how awesome this was. Of course it was fun – what bike isn’t? But honestly, I’d have been a lot happier on an XSR900.

It might be too committed a ride for me, but it won’t stop me raising a contented smile if I’m fortunate enough to see one on the road in the future, while thinking; “I’m one of the lucky few that have ridden that…” 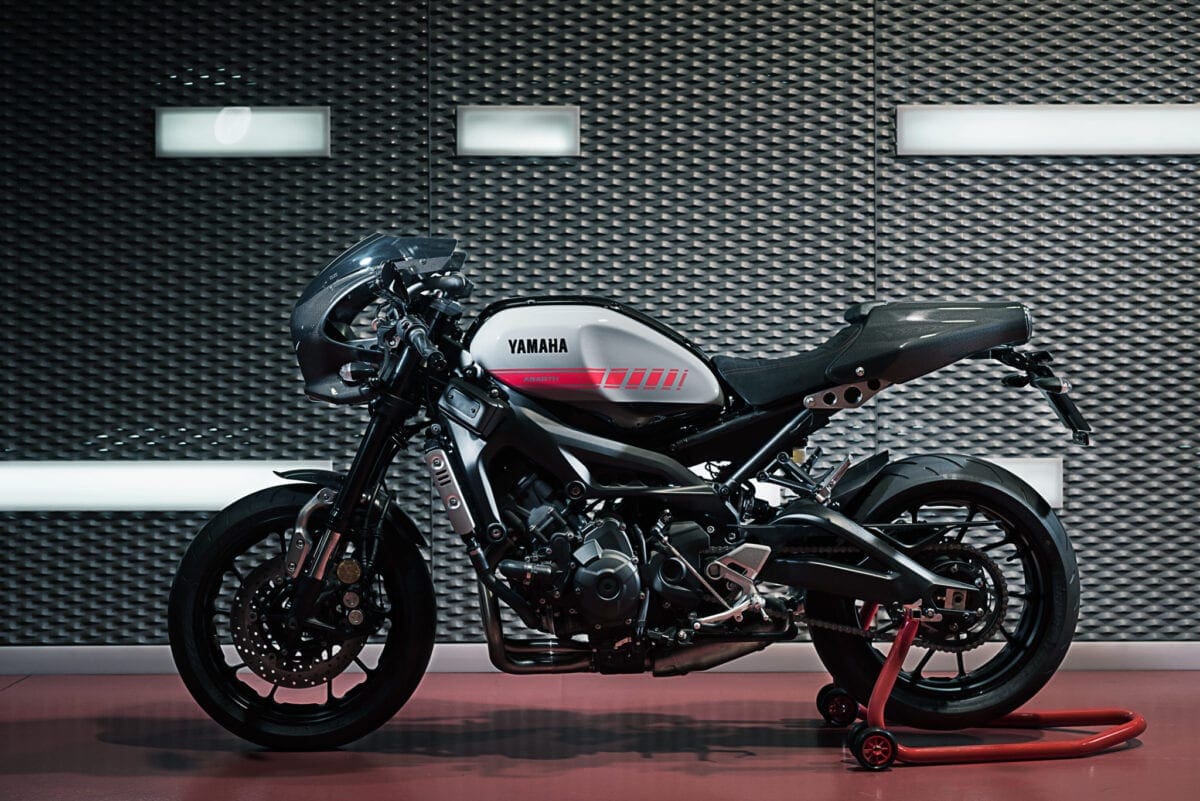