Having the Hayabusa as a long-termer means that not only will I be able to get used to what button changes what attributes, but also I’ll actually be able to play around with the rider configured modes to – potentially at least – get the Suzuki Drive Mode Selector Alpha systems set up to suit my type of riding. These amount to the bike’s power delivery (Power Mode Selector), traction control (Motion Track Traction Control System), and anti-wheelie (Anti-lift Control System), although there are other things to play with once I get that lot all dialled in. 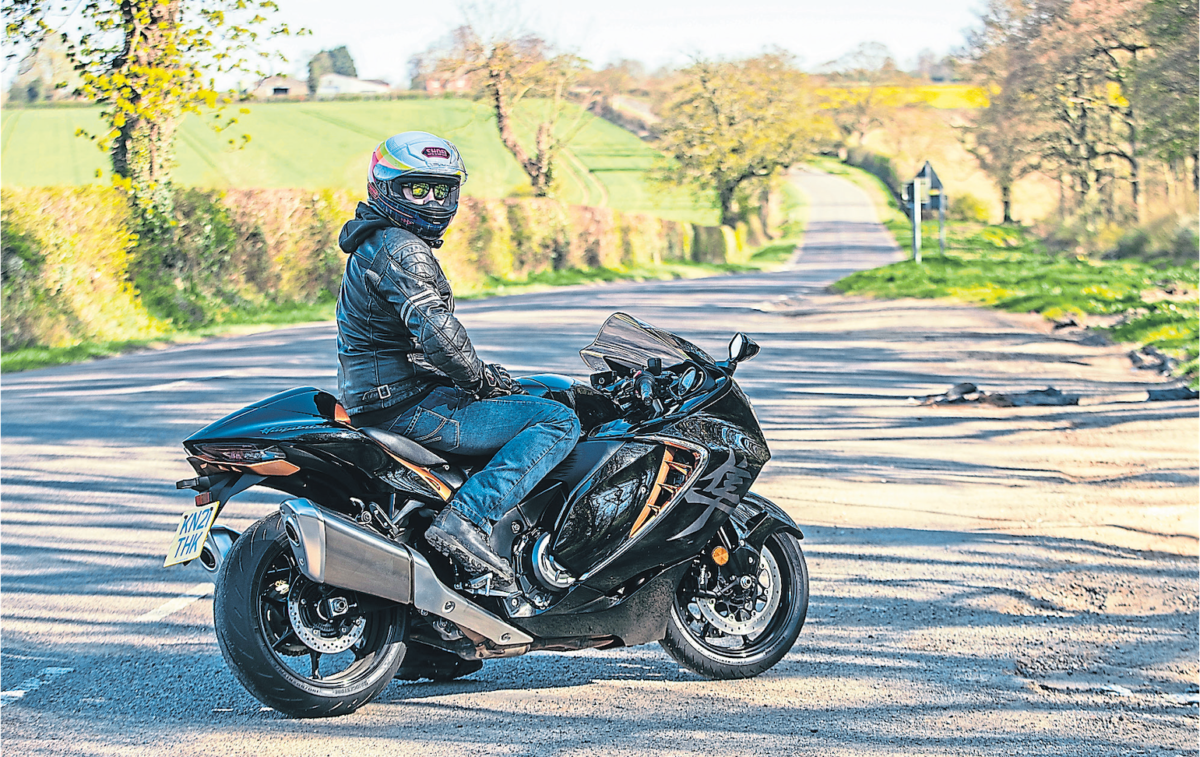 Dave Manning and the Suzuki Hayabusa

As it is right now, all I’ve managed to do is work out how the cruise control works, which sounds a little tardy of me, but bear in mind that, at the time of writing this review, I have only had the bike long enough to get through one tank of fuel. I’d swapped the pillion seat cover (which is an optional extra, at £180 for the actual seat), so I could take my good lady wife out for a spin, although I didn’t get around to fitting the grab rail, as that’s a slightly more involved procedure, whereas the cover/ seat swap is done in seconds, and two-up shows that the ultra-smooth quickshifter is of great benefit for the pillion.

One of the things that I was as keen to double check as soon as possible was the power figure that Suzuki claimed for the Gen 3 Hayabusa, of which so many internet experts had seemingly been very smug over, given that the official factory power figures were lower than those for the previous model. So, in order to see just how pokey the new bike was, I headed south and west to see Sean Mills at Big CC Racing (www.bigccracing.com), in Wokingham…

Sean has been playing around with Suzuki’s big battleship ever since they were first launched. In fact I borrowed a first generation Hayabusa from him, complete with aftermarket exhaust and stretched swinging arm, to ride to a run-what-you-bring drag race at the much-missed Avon Park track near Stratford-upon-Avon, recording my first sub 10-second quarter-mile run in the process. 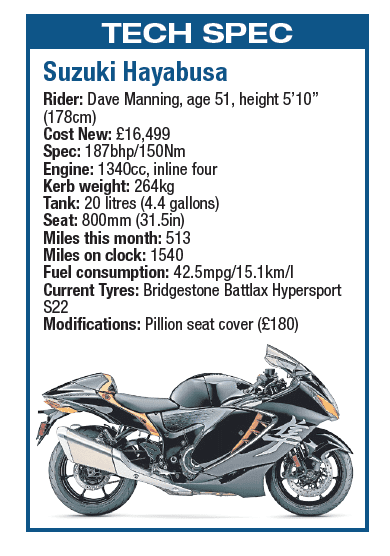 Since then, Big CC has tuned countless Hayabusas, from mild pipe and Power Commander arrangements, to firebreathing supercharged and turbocharged examples of the breed. In fact, Big CC was the first to record 1000bhp from a Hayabusa. Yes, you read that right, one thousand horsepower! What we wanted to see here wasn’t outright power figures – this was just an exercise in seeing what Suzuki stated was correct, and how those figures compared to a second generation example, in real world terms, and not in the clinical environment of the test laboratories of the Hamamatsu factory.

After a couple of warm-up runs, and me trying to remember how to turn off the traction control and ensure that the bike was running on a full power setting, we ended up with several back-to-back runs giving a high of 177bhp and 110ft-lb of torque. This compares to the 187bhp and 150Nm (which just so happens to equal 110ft-lb) that are claimed by the factory, and while the torque is the same, I would suggest that the lower horsepower figure will be down to the fact that Suzuki probably records its figures on a dyno that has fans to replicate the air pressure at speed, whereas the Big CC dyno (like probably all dynos in the UK) only has fans for cooling purposes and that cannot replicate 180mph wind!

But – and this is what the internet naysayers have been missing – what is truly impressive with the new Hayabusa is the mid-range gains it has over its predecessor. As Sean has run a bog stock Gen 2 model on his dyno we could directly compare the two, with the new model having higher torque figures all the way from tickover up to 9250rpm, and higher horsepower figures up to 9750rpm! So, while the older model does hold on to its power a little longer at the top end, it’s only when the motor approaches its redline and, to be honest, how often are you likely to see those kind of revs when riding on the road? If it’s often, how long do you think that your licence will last?…