A report in the British Medical Journal pulls together 40 years of data on motorcycle deaths across the US, and has found that the risk of having a fatal crash is higher under a full moon. 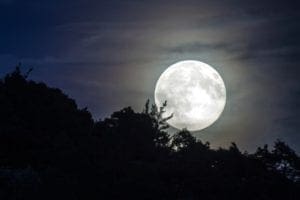 Writing in the British Medical Journal, Donald Redelmeier – together with Eldar Shafir from Princeton University – said; “Our study suggests that extra care is needed when riding a motorcycle under a full moon. The average ride for a motorcyclist is more dangerous than [for] a drunk driver with no seatbelt who travels the same distance. Risk is one of those things that people just can’t sense until it is too late – that’s why we need science about this.”

In total, there were 494 full moons between the start of 1975 and the end of 2014, with 4,494 fatal crashes between the late afternoon and the next morning on those days. The results reveal that on average 9.1 crashes took place on nights with a full moon, compared to just over 8.6 when the moon was not full, which translates into a 5% greater risk of crashing. The result held regardless of factors including the time of year and decade as well as the motorcyclist’s age, engine size, and whether or not they used a helmet. “5% is a great big deal when it comes to road safety,” said Redelmeier. Plus, when investigating the effects of supermoons the impact appeared even greater, with a 22% higher risk compared with a regular full moon.

To analyse whether crashes were more common on moonlight nights, the team looked at the number of night-time crashes one week before and one week after each full moon – allowing comparisons between the weather, year, day of the week and even changes to road layouts and traffic levels.

Commenting on the study, David Spiegelhalter, Winton professor for the public understanding of risk at the University of Cambridge, said; “The typical fatality is a middle-aged man having a head-on collision on a big bike in the country while not wearing a helmet,” he said. “5% more bikers get killed on full-moon nights, and the authors suggest this may be because of distraction. But maybe it’s simply because 5% more of these idiotic ageing juveniles go for a spin on a nice bright night?”