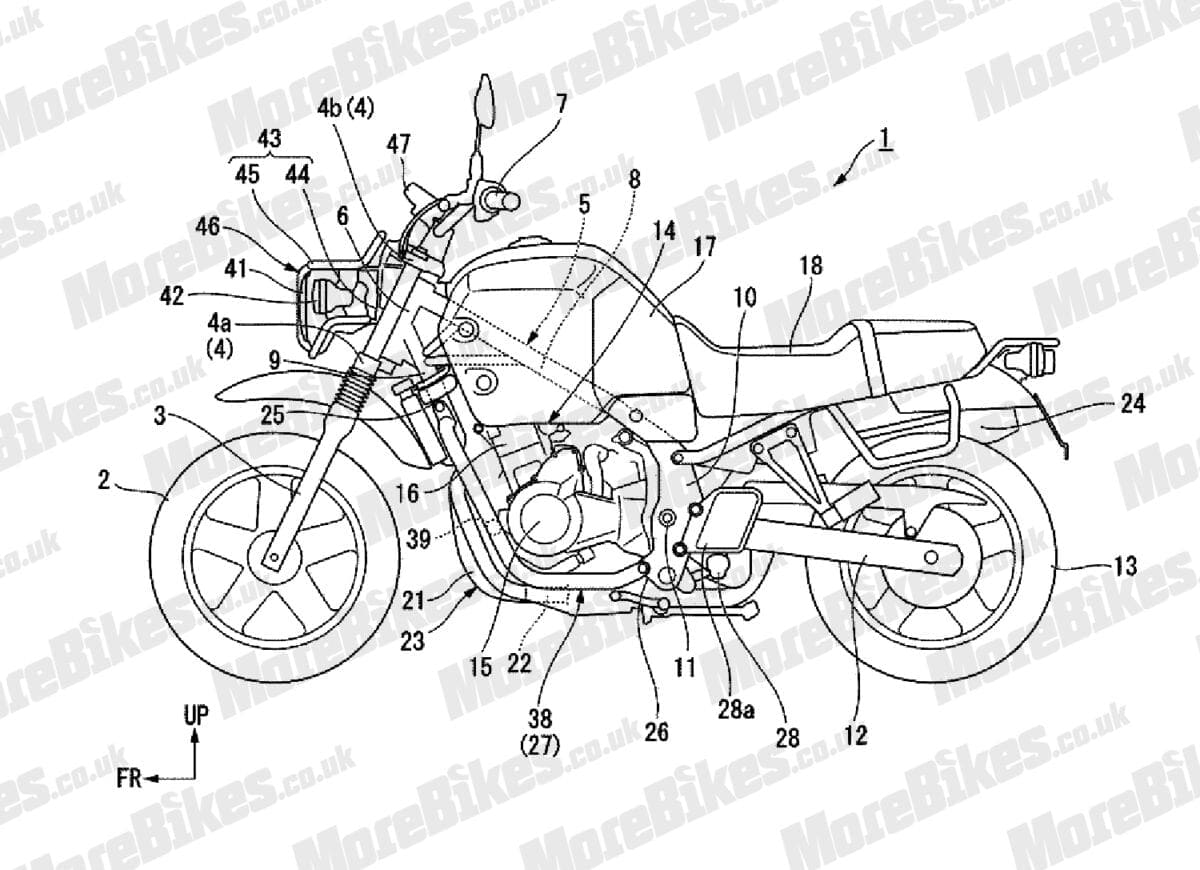 These designs from Honda that show a new bike on the way which bears more than a bit of styling DNA with the original Adventure motorcycle, the 1980 BMW R80GS (pictured below). Although the bike is very similar to the firm’s Bulldog 400cc concept it showed in 2015. 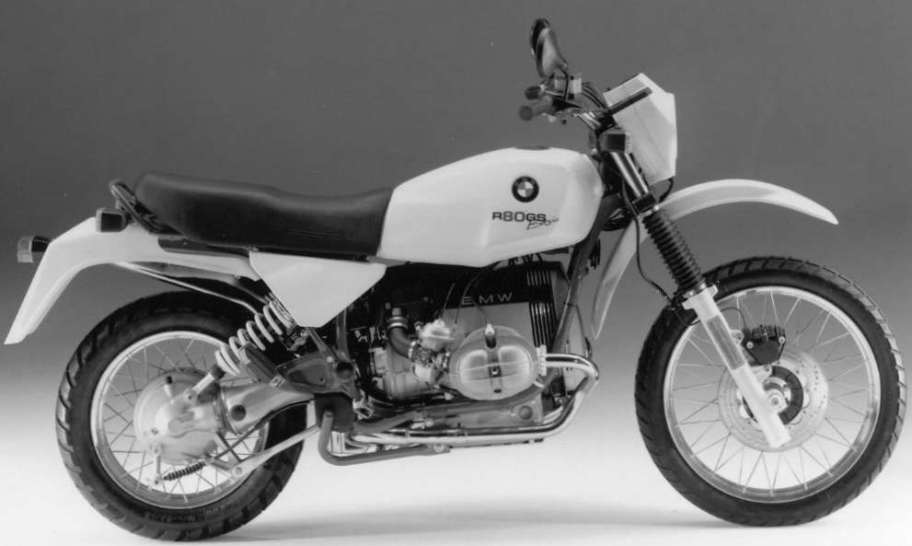 It’s a bold move by Honda which tried to hide these motorcycle designs in a patent registration document for an indicator housing, but the drawings clearly show a 1980’s Adventure style motorcycle with plenty of travel on the front and back suspension, a high front mudguard and other pointers to a future model in the Honda range.

And whilst this motorcycle doesn’t ape back to the glory days of Honda’s early Adventure motorbikes like a Transalp or an XR, it does ape the styling and key selling points of that original German bike from nearly 40 years ago.

In the two drawings for the new bike you can clearly see what looks like a current CB1100 engine and frame, but from those starting points everything changes.
The new bike gets revised forks with more front end travel, standard (not Outer Upper Tube or Upside Down) tubes have their seals protected by retro-style fork gaiters. The front mudguard is lifted high off the front wheel to allow mud to clear the tyres rather than getting clogged up when off-road. 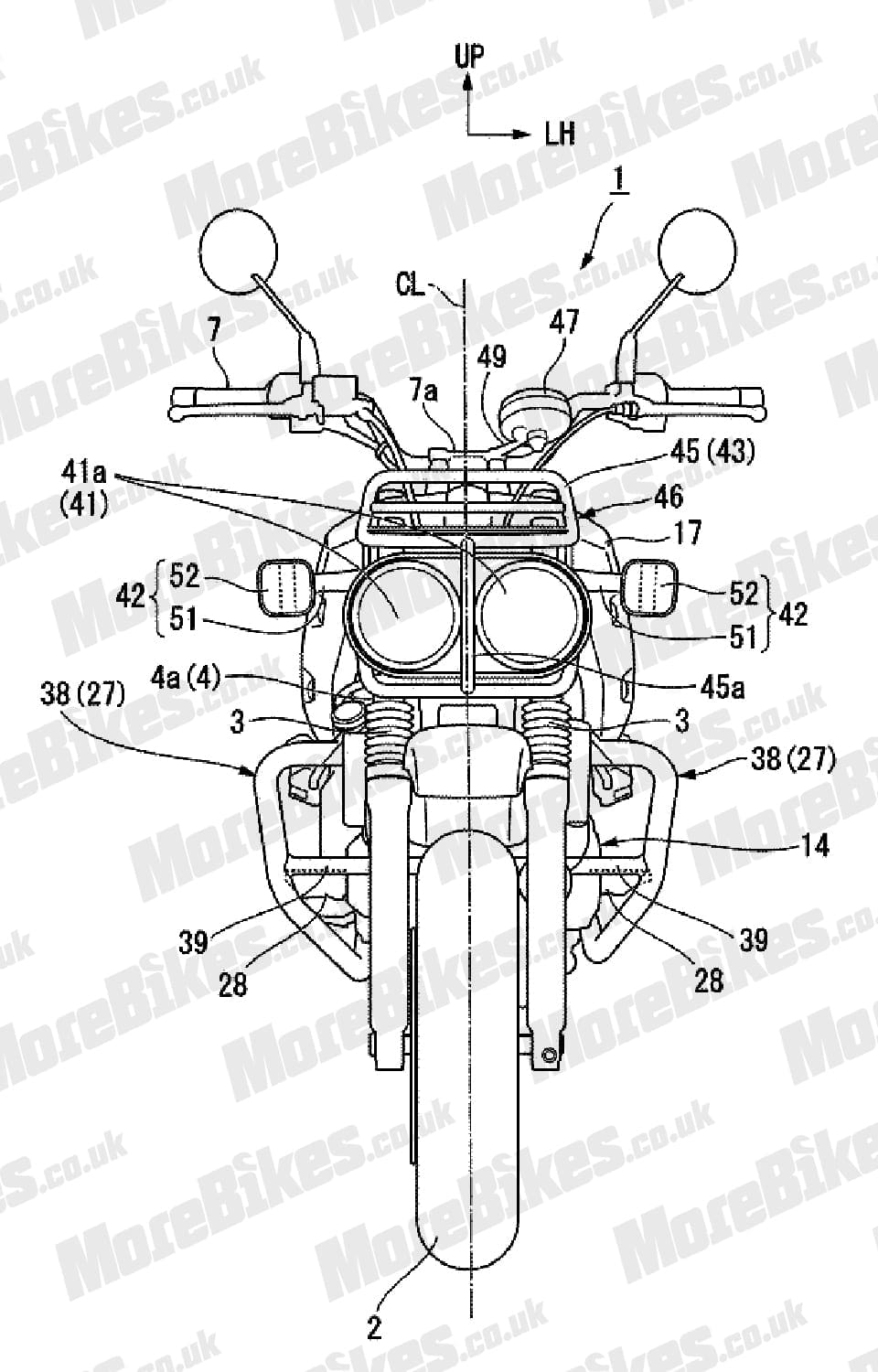 Around the new dual front headlights is a steel tube guard that also has a platform element on top where luggage can be strapped to the front of the motorcycle.
Weirdly, when looking at the front design of the bike, it appears as though the new model will only run a single dash dial and this will be offset to the rider’s left (as looking from the point of view of the riding position) this is to give the rider the most visibility when picking a line through tricky off-road ruts and sections.

Whilst the design looks like the new bike is running the current CB1100’s oil cooler and exhaust system, what is hugely different is the huge petrol tank on the new model. Reaching down over the frame, the tank looks to have a massive capacity – look at the bike from the front and you can see how the bike’s huge engine bars extend wide enough to protect most of the lower sections of the massive petrol tank, too. 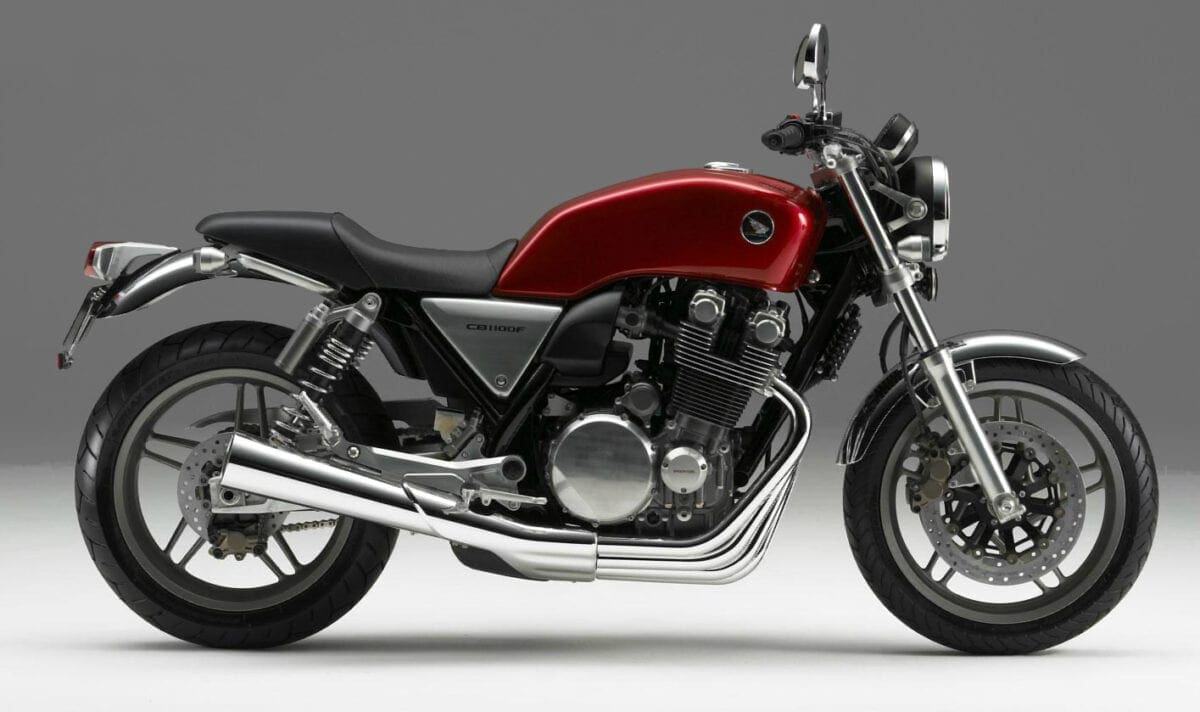 The front view of the motorcycle also gives away the fact that the machine gets a single front-wheel disc (to cut down weight on the bike’s front end) this is different to the current CB’s layout which uses two 296mm floating discs each with four-piston Nissin calipers.
Elsewhere, the new bike’s seat is more staggered than the CB’s with a pronounced lip between rider and bottom of the petrol tank, the bike shows large, solid pannier mounting points and a large integrated luggage wrack at the rear for even more carrying capability.

What’s most surprising about this design though is the lack of twin rear shocks, which would be entirely in keeping with the retro-styling of this semi-off-roader. Where the current Honda CB1100 (pictured above) has twin rear shocks as standard, the design drawings have the bike with a single shock at the rear.