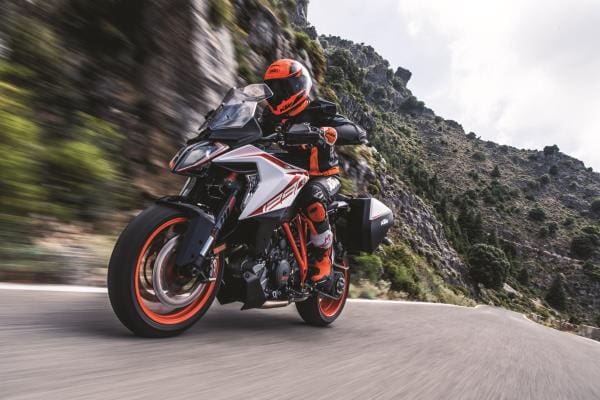 KTM has just unveiled the changes to the range-topping 1290 Super Duke GT and Super Duke R.
There’s very little changed with the R other than cosmetics and graphics whilst the GT does get some tweaks to make it easier to use.
Here’s what KTM says it’s done to the bikes for 2019:
KTM 1290 SUPER DUKE GT
The bike has the latest generation 1,301cc 75° V-twin LC8 engine – the same motor as in its ‘R’ sibling and the lump now gets revised resonator chambers, titanium inlet valves and new mapping for a max output of 175bhp and 141 Nm of torque.
Along with smoother performance at lower rpm, the addition of the Quickshifter+ means clutchless up and down shifting. 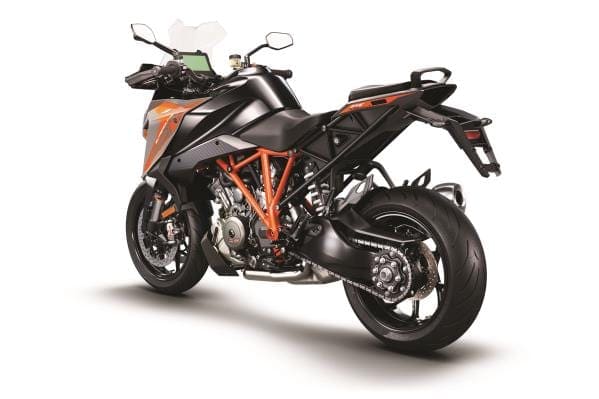 The KTM 1290 SUPER DUKE GT also gets the full suite of KTM’s electronic performance and assistance systems including lean angle sensitivity for mid-corner braking, traction control and different ride modes including an optional ‘Track’ mode .
Big changes for the 2019 GT can be found in the dash. Set behind the new aerodynamically developed windshield with multiple height positions and improved one-handed adjustability, is a 6.5-inch TFT display.
The full colour screen is visible in direct sunlight. Working through the bike’s various menus and extensive functions is an intuitive illuminated menu switch found on the left bar, where the cruise control switch is now positioned. 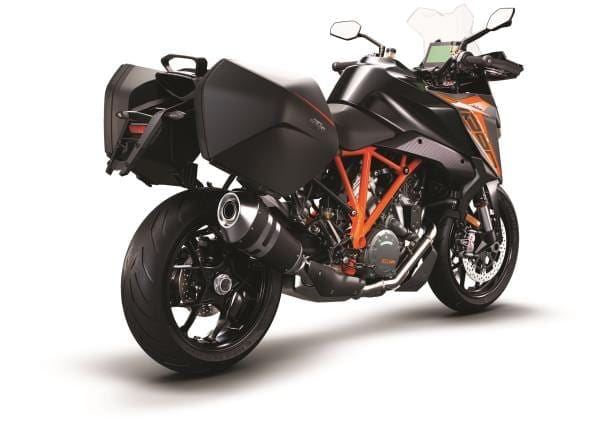 Set within the redesigned front end is a powerful new LED headlight, where form and function are beautifully integrated. The central aluminium heatsink holds six forward-facing ultra-bright LEDs, while further LEDs create the daytime running light (DRL).
The fuel tank spoiler-mounted LED cornering lights provide illumination to the inside of turns.
The latest generation WP semi-active chassis is the most sophisticated setup offered on a KTM so far, with deeper analysing sensors automatically adapting to surface conditions.
Rider, passenger, luggage or all three, the GT’s preload can be adjusted for the bike’s ‘cargo’ at the push of a button, with no need for tools. Also transformed with fingertip control is the choice of damping to suit the mood and road: Comfort, Street and Sport.
Two colour options, white or black are available. On each side of the fuel tank spoilers, new storage compartments creating easy access for essential small items, such as keys or toll cards. One side is fitted with a USB socket to charge and power favourite gadgets on the move with heated grips installed as standard.
KTM MY RIDE smartphone connectivity adds another type of comfort. The 2019 KTM 1290 SUPER DUKE GT is now navigation ready for onscreen turn-by-turn directions and audio prompts in five languages, via a separately available app. Caller ID is displayed with the ability to receive or reject incoming calls, along with the option to toggle through tracks on a music playlist. 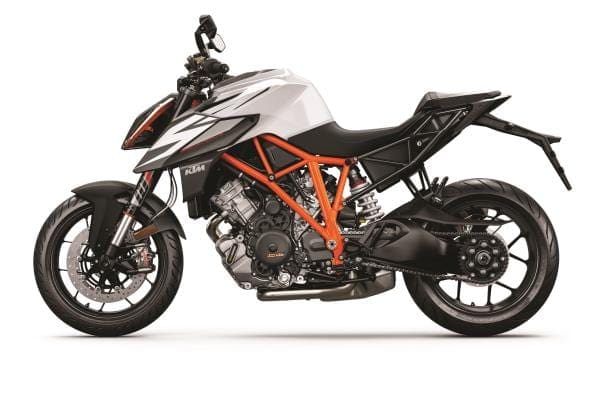 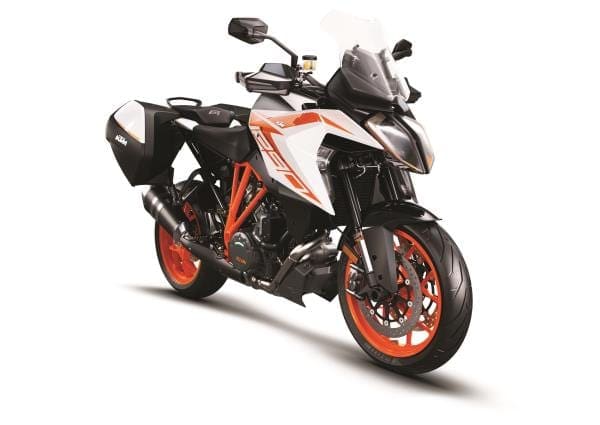 Tony Carter
Tony has been riding motorcycles for over 35 years and he's been a motorcycle writer for over 25 of those. He's ridden almost every motorcycle you can think of at most places around the world and he's partial to some racing, too. A Taurus, Tony doesn't believe in horoscopes (but then that's exactly what a Taurus would say!) but he does believe in Mandalorians and their right to earn a living.
<img src="https://www.morebikes.co.uk/wp-content/uploads/gravatar/tony-carter-bio.jpg" class="photo" width="250" alt="Tony Cart