Patents for Honda’s EV-Cub have just gone public – all but confirming we’re going to see an electric version of the Japanese factory’s iconic Super Cub in the not too distant future. 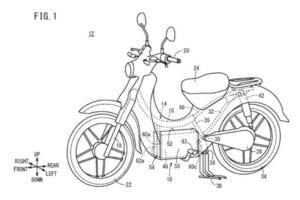 First shown as a prototype at the Tokyo Motor Show back in 2015, patents for the EV-Cub were originally filed in 2016 – but now they’ve been made public. The scooter detailed in the designs looks nearly identical to the recently revitalised Super Cub which was released a couple of years ago, aside from one obvious difference; its electric motor.

So what do the patents reveal? Well firstly, Honda’s kept the machines centre of gravity low by placing the battery between the footpegs – essentially, where the engine would usually be.

Interestingly, the patents also detail a clever mechanism which allows the battery to be easily removed. That means Honda’s imagining a future where riders can head to a battery exchange and simply swap out the depleted unit for one that’s fully charged. 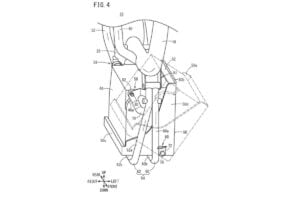 It’s not exactly a surprise – at the end of this year we revealed that Honda was working on rolling out infrastructure across Japan, to accommodate its Benly-E and Gyro-E scooters.

Of course, there’s no talk of a similar setup in the UK just yet – but if Honda’s idea proves a success at home, maybe they’ll start looking at rolling out to the wider world. Either way, it’s clear that Honda’s starting to get serious about electric; at least from an urban mobility perspective.