Triumph reveals its FASTEST and LIGHTEST Speed Triple ever

When Triumph updated their Speed Triple back in ’18, they really did craft a lovely machine that was easy to ride and confidence inspiring; in a world where it was mainly insanely-powered hypernakeds populating the litre bike naked scene, it came in with just 150 horsepower, a softer stance, and well, a bit of a gentle personality.

But then again, it lacked that savage edge that comes with strapping straight bars on an insane engine and chassis combo, which meant it didn’t quite have that zest of some of its rivals. But for 2021? Well, with their all-new Speed Triple 1200 RS, it’s looking like all of that has gone out the window – and for good bloody good reason.

When we say this is an all-new machine, we aren’t pulling your plonkers – we really do mean it. Everything has been built for this very bike; from the dash at the front to the exhaust at the rear, the whole lot is new – and yes, that is including the engine and chassis, meaning that this really is the real deal. 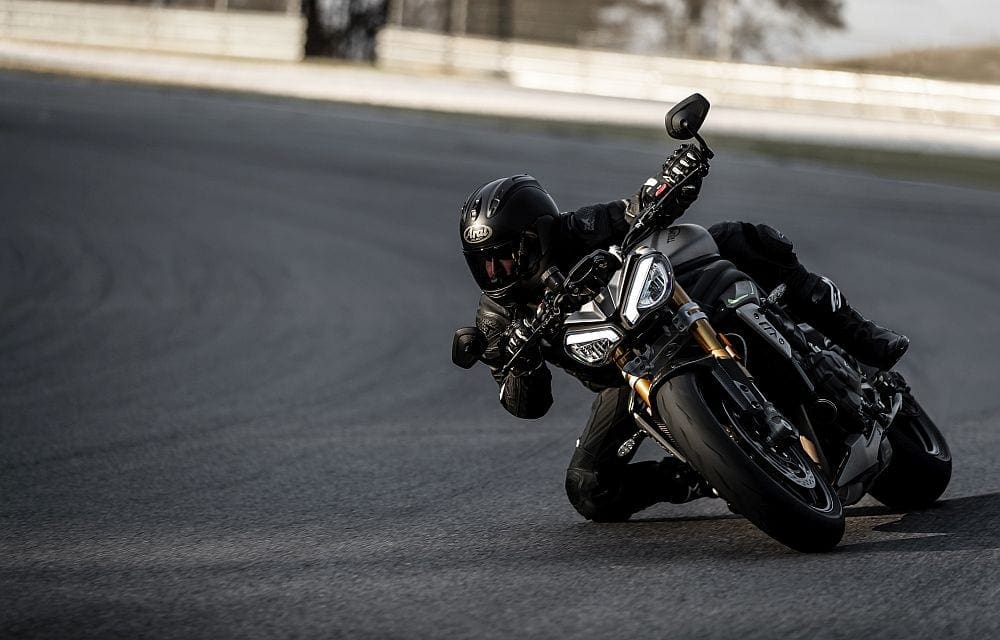 For starters, the brand spanking new 1160cc Triple motor is now not only larger in capacity than before, but is also a whopping 7kg lighter than the old lump – yet even so it’s beefier than ever, offering an extra 650rpm before you hit the redline compared to the previous generation.

Thanks to the work Triumph have put in, the new Speed Triple is pumping out an extra 30 horsepower (to make 178 horses) and an extra 8Nm of torque (to make 125Nm) than on the previous model, which when coupled with the 10kg weight saving overall (yes, ten!) is the largest increase in power-to-weight since, well, ever for Triumph on this model.

They really have gone to town, meaning everything from the intake at the front to the exhaust valve at the back is new, including gifting the 1200 RS with a new slipper clutch and smoother stacked gearbox. Triumph have told us that not only is it an absolute peach at the top end, but it’s also incredibly good at the bottom as well, thanks to the low inertia from the engine – 12% less than before, to be exact.

They’ve even managed to pack in a load of their Moto2 knowhow to not only make it incredibly fast and responsive, but also reliable as well – meaning that service intervals are a whopping 10,000 miles.

But that’s not all folks, oh no. They’ve then taken this pretty potent-sounding powerplant and stuck it in a new lightweight cast aluminium frame that is not only tighter, narrower and more compact, but it’s also a whopping 17% lighter than the previous one.
Couple that with a weight distribution that edges further both further forward and lower, and it’s pretty obvious that Triumph have worked their socks off to make the Speed more aggressive and sporty than ever before; especially so as they’ve improved the improved ground clearance as well.
Couple that with high-spec fully adjustable Öhlins 43mm NIX30 USD forks and an Öhlins TTX36 Monoshock, Brembo Stylema stoppers and some super sticky Metzeler Racetec RR rubber, and it looks like Triumph really are onto a winner when it comes to fast road and track action.

And that’s without even delving into the tech behind the new Speed Triple 1200 RS; the old one was definitely no dinosaur in terms of equipment, but even so Triumph have given the new Speed a whole new dash and operating system, which they tell us makes things not only easier to change settings on the fly, but is also easier to read exactly what info you need.

It comes equipped with five riding modes that includes an enhanced ‘track’ mode, alongside Triumph Connectivity as standard – just in case you fancy hooking up your phone or GoPro to your bike.

The electronics are run through an IMU and as you can imagine it comes with all the bells and whistles, that Triumph have been working hard in improving for minimal intervention whilst riding: we’re talking traction control, front wheel lift control and cornering ABS, alongside linked brakes, to get you stopped as quickly as possible.

There’s a new ‘shifter & ‘blipper with a variable position sensor for the very crispiest gearshifts, and even a lithium battery, alongside LEDs all round, and self-cancelling indicators. Oh, and keyless ignition, but thankfully for this model, you can open the fuel cap without the key, and even disable it if you fancy, for extra security.

But one of the best parts? Well that has to be the price. You see, it’s not just performance figures that have risen it the hypernaked class, but the cost has also shot up. Triumph’s new Speed Triple 1200 RS comes in at £15,100 on the road, which is incredible considering the goodies it comes with, and how much the competition comes in at (especially if its Italian).